With 2019 drawing to a close, this year’s Egyptology harvest proved excellent once again. Sometimes, the finds were new. At other times, fresh facts gave more meaning to old finds and knotted mysteries a little tighter. Other artifacts had not been seen in decades. Whichever way they present themselves, the haul makes for a fascinating read. From bizarre hieroglyphics, the real taste of Egyptian bread to temples underwater, you can now enjoy the best of Egyptology’s latest season.

10The Teenager And The Pyramid 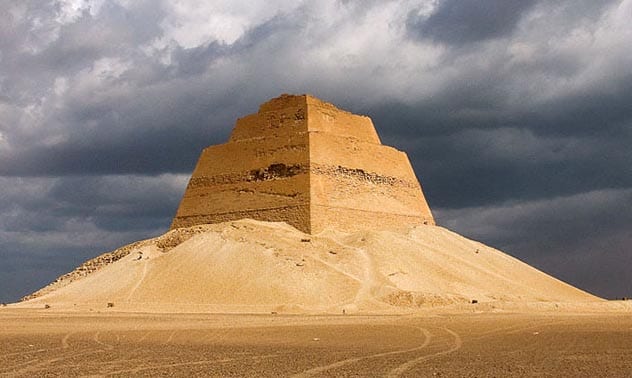 In the region of Beni Suef stands a pyramid. This odd duck is called the Meidum pyramid. It was originally a step monument but the sides were later smoothed to turn the structure into a real pyramid. Nobody knows why Meidum was altered in this way. In 2019, a grave added to the site’s reputation to head-scratch for answers.

Dug next to the 4,600-year-old pyramid, the tomb held a teenage girl. When she died from unknown causes, she was about 13 years old. The time of her death is less certain but the teen was definitely an ancient Egyptian. Her body was arranged in a squatting position and there was a glaring lack of grave goods. The investigation did uncover signs of a cemetery and a pair of bovine skulls. They were likely a funerary offering but the heads could not be linked to any specific burial, including the anonymous girl’s.

The expedition also found traces of a brick wall, which may or may not have circled the cemetery. Overall, a teen buried without ceremony next to an altered pyramid surrounded by a wall is a combination that will likely keep archaeologists guessing for a while.[1] 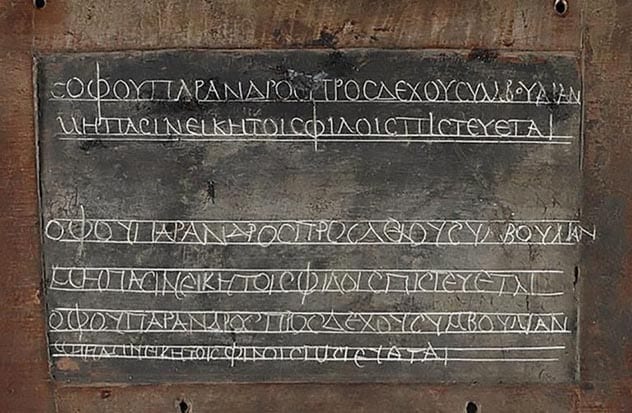 In 2019, the British Library took an artifact out of storage. The public last saw the tablet in the 1970s and visitors viewing the exhibition (which highlighted the history of writing), it looked downright modern. Along several lines, a child’s scrawl copied phrases written by an adult hand. Only it was not modern. The tablet was 1,800 years old.

The Egyptian student was required to copy two pearls of wisdom in Greek. Not only did he learn his letters but it was also an exercise of the mind. Instead of copying only characters, the adult’s writing warned him of bad friends and that wisdom should be sought from wise men only. The child was likely male since education among Egyptians was reserved for the boys of high-status families. This also explained why an Egyptian kid carved Greek into a tablet. Rome ruled his country during this time and all educated people in the Roman world were expected to know Greek and Latin.[2]

8 A Worthy Woman And Her Pet 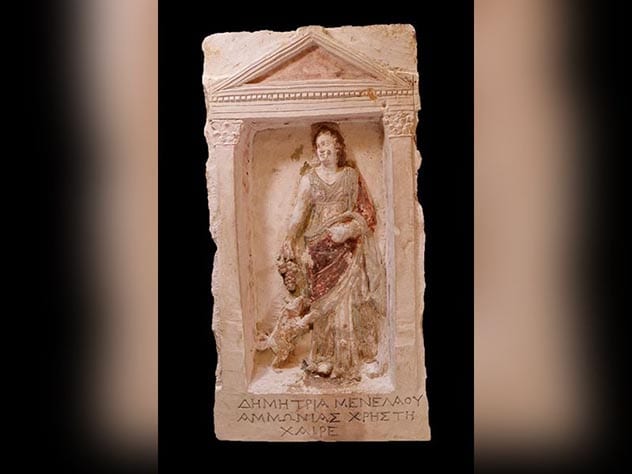 Another announcement in 2019 described the tomb of a woman. Archaeologists shoveled around the productive site of Saqqara when they unearthed a catacomb. It dated back 2,000 years ago when the Romans controlled Egypt. Indeed, the woman buried there was not an Egyptian.

Her name was Demetria. Greek inscriptions gave her closest relatives’ names and called her “worthy.” A carving inside the tomb depicted her in a beautiful dress while holding grapes. An animal, which was a pet but not clearly defined as any known animal, gazed up at Demetria with its paws on her dress. Several cat-like statues could also not be clearly identified as a particular species.

Images of Egyptian gods added to the magnificence of the underground chamber. An inscription below the deities gave the name of one Menelaos and described him as their servant. The Greek title given to describe his servitude was “Therapeutes,” something which is exceptionally rare in any Egyptian context. The term is not unknown but experts cannot agree on what a Therapeutes did for his masters or how these servants lived.[3]

7 The Mystery of The Bird Mummies 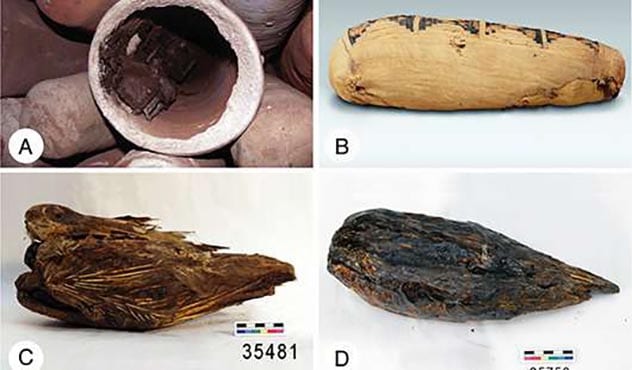 Egyptians loved to give mummies as offerings. Everyday citizens went to their local dealer, usually a priest of some sort, and bought a small animal or bird. Indeed, birds were so popular that Egyptologists have gathered millions of preserved avians. Some even had their own tiny coffins.

However, the sheer number of bandaged birds prompted the question of supply. The most commonly used species was the African sacred ibis but where did the Egyptians get them all? Conventional thought supported the idea that Egypt had ibis farms in the way that we have chicken farms. In 2019, geneticists drew samples from 40 ibis mummies and came to a very different conclusion.

Domesticated birds of the same species show similar DNA. The petrified ibises, however, showed enough variation to suggest that they were born wild. In other words, the Egyptians seemingly corralled wild birds to wrap them up as offerings. There is a problem with this, as critics quickly pointed out. Catching millions of ibises alone would have been close to impossible and also unsustainable. The Egyptians had a steady supply but seemingly not farmed. The feathery mystery continues.[4] 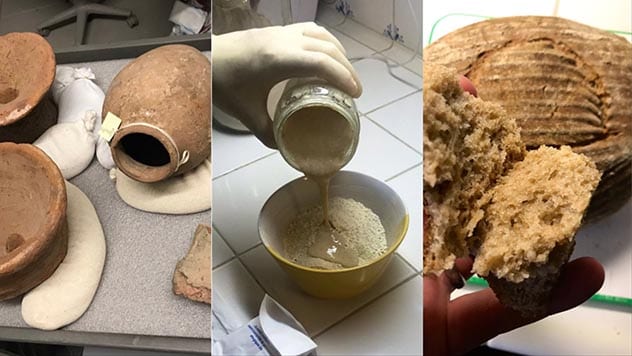 Seamus Blackley is known as one of the creators of Xbox. Few people know that he is also a hardcore amateur Egyptologist and baker. These two hobbies recently merged to rediscover an extinct taste. Blackley wanted to munch Egyptian bread and he set out to make some. The only problem was that he needed the yeast used during ancient times.

He managed to get his baker’s mitts on 4,500-year-old yeast. The dormant stuff was scraped from cooking pots used during the Old Kingdom. He was assisted by scientists to reawaken the yeast in their laboratories and he was allowed to carry some home. Blackley cultivated the sample for a week, nourishing it with olive oil, hand-milled barley and early wheat called einkorn. Eventually, he had a starter, which is similar to what is used to make sourdough loaves.

The next step was to mix the starter with authentic ingredients. Modern wheat was out since it was invented long after the yeast went into hibernation. Blackley used ancient grains like einkorn, barley, and kamut. While it baked, he noticed that the scent was sweeter than other bread he previously made from the same grains and modern yeast. He described the finished look as “light and airy,” and that the “aroma and flavor are incredible.”[5] 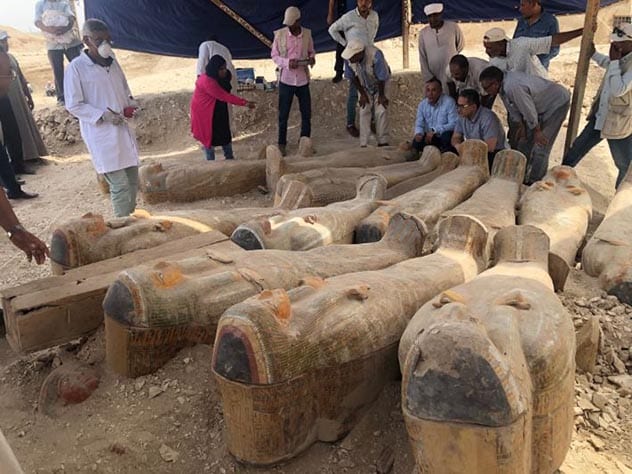 In 2019, Egyptian authorities invited journalists to a conference. At the meeting, they revealed a spectacular find – 30 pristine coffins. The caskets were crafted and painted 3,000 years ago. Despite this dusty fact, the overall condition was remarkable. The decorations were clear and kept their patterns and colors.

The corpses came from a necropolis called El-Assasif, near Luxor. The quality of the wooden coffins and clues about their identity suggested that some were priests. For this reason, the discovery soon became known as the “cachette of the priests.” Upon discovery, the group was arranged in two layers with 12 caskets stacked on top of the rest below. They were sealed and untampered with.

Perhaps for dramatic effect, two coffins were opened during the conference. The mummies appeared well-preserved with bandages intact. All told, the cachette contained 2 children, 5 women, and 23 men. Their unlooted state could help researchers find out who exactly they were and why they were buried together.[6]

4 Pieces Of A Missing Temple

Divers have been exploring Heracleion for about two decades. This ancient Egyptian city was a busy port but for some reason, disappeared under the water. The ruins were rediscovered 45 meters (148 feet) under the Mediterranean Sea. Several artifacts and buildings were cataloged but in 2019, an international team made the most significant find thus far – massive stone columns.

The monumental chunks probably belonged to the city’s main temple, called Amun Garp. Scanning equipment made the discovery possible, beaming images back to scientists without the need to shovel through tons of silt and fish. As a bonus, the scans also found a smaller Greek temple and shipwrecks stuffed with jewelry and coins. The dive also recovered another piece of a ceremonial boat found on another occasion.

The sunken city, sometimes called “Egypt’s Atlantis,” was built sometime during the eighth century. It had already produced magnificent architecture, treasures and colossal statues. Since about 95 percent of Heracleion remains unexplored, the city is bound to deliver more surprises.[7] 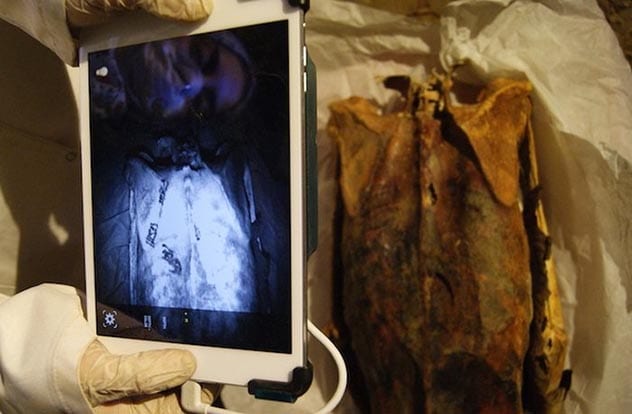 Around 3,000 years ago, artists lived near the Valley of the Kings necropolis. Their job was to make the royal tombs pretty with murals. When they were done for the day, the men and women returned to the village of Deir el-Medina. Their spare-time creative endeavors would not come to light until 2014.

A female mummy from Deir el-Medina sported several tattoos. Due to their abundant numbers and sacred theme, she was tagged as a probable priestess. As time went by, six more women – very much preserved and decorated with tats – were unearthed at Deir el-Dina. In 2019, researchers released their findings and it changed what we knew about ancient Egyptian tattoos.

In the past, scholarly minds had no reason to think that Egyptian tattoos were anything but a rare mark denoting a high station. But the Deir el-Medina women showed that inking was more common among the people than previously believed. While they did play a religious role, the tattoos had a modern purpose – to add to their personal and public identity in a permanent way.[8] 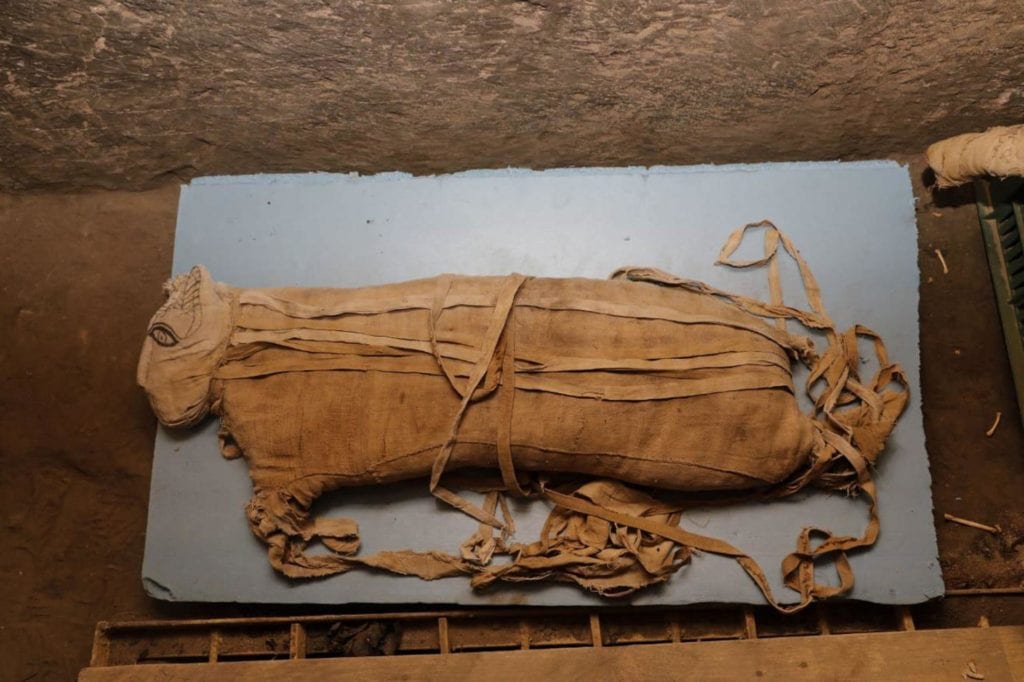 The ancient Egyptians had a quirk. The lion was among their most powerful symbols and yet, only one mummified lion had ever been found. The big cats are not a part of Egypt today, but back then, several prides lounged around the Nile. The royals even kept them as pets. So where were the bodies?

After digging through centuries and millions of mummies, the mystery endured. There had to be more than just the single lion since classical writers described the Egyptians mummifying the big cats. A break came in 2019. An excavation in Saqqara revealed a slew of domestic cat statues, cobras and crocodile mummies. Then the catacomb produced five feline-shaped mummies. To the team’s delight, they turned out to be lion cubs.

The ancient cubs died when they were eight months old. Their discovery could clarify why so few lions were embalmed despite being elite symbols. For this reason, one cannot help but wonder why the Egyptians deemed it important to put five lion mummies in the same place.[9]

1 Hieroglyphs That Make No Sense 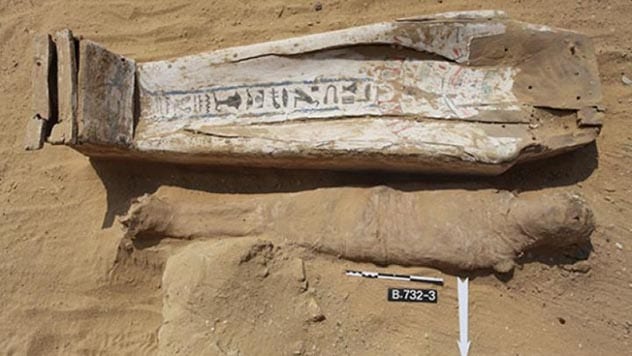 Egyptian tombs can get a bit old. Not just in the literal sense, either. In all honesty, most run a familiar pattern. First lost to time and then rediscovered. Elite individuals are identified and they come buried with a ton of stuff. Inscriptions and murals make a movie of their lives. Yawn. In 2019, officials announced a tomb that bucked the trend.

A year earlier, archaeologists found burials at Saqqara from 2,000 years ago. One of the modest coffins was badly decayed but curious details survived. At the level of the person’s neck, the coffin’s lid was decorated with a painted necklace. Lower down, hieroglyphs normally provided the deceased’s name.

But when experts tried to read the inscription, it made no sense. There was nothing wrong with their reading skills – the hieroglyphics were an imitation of the real thing and translated into utter nonsense. It is plausible that the artist was illiterate because none of the signs had the correct shape. The person also enigmatically painted a blue Anubis on the coffin. Normally, this jackal-headed god is depicted in black. What could this mean? Your guess is as good as ours![10]

For more amazing lists like this, check out Top 10 Recent Riddles And Revelations From Ancient Egypt, and 10 Facts About Ancient Egyptian Mummies You Didn’t Know.