Conspiracy theories seem to have become a cultural staple. From aliens, to doppelgängers, to faked deaths, to lost twins, and even secret cults, there is more or less a conspiracy theory for everything. And although it may seem a bit strange, no one is above being included in a conspiracy theory… or believing in one. Not even the President of the United States.

See Also: 10 Dark Conspiracy Theories That Actually Turned Out To Be True 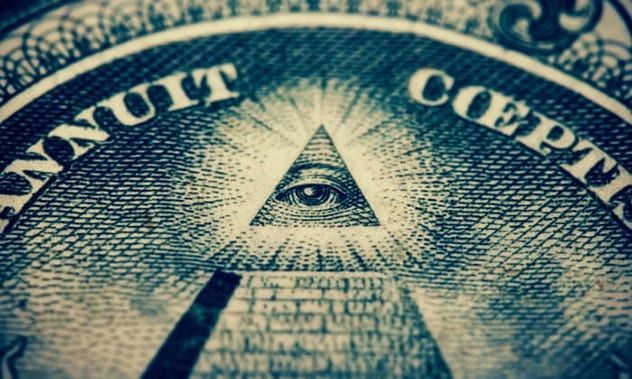 You read that right. According to conspiracy theorists, even back in the 1800s the Illuminati were hard at work trying to control important members of the public. In this case, it was the Illuminati that pulled strings in order to get Thomas Jefferson elected in the first place.

During the time of Jefferson’s election, the Federalists, who were part of Jefferson’s opposition, claimed that Thomas Jefferson was not only connected to the Illuminati but was the American Head of the Illuminati sect. And by electing him, he would help to create a government takeover which would get rid of people’s ability to own private property and destroy Christianity. This seems a bit farfetched as Jefferson was public about his personal Christian faith especially, yet the conspiracy theory remained and ultimately Jefferson was elected president—whether it was thanks to the Illuminati or just American voters, we’ll never quite know for sure.[1]

9 Millard Fillmore vs the Catholics 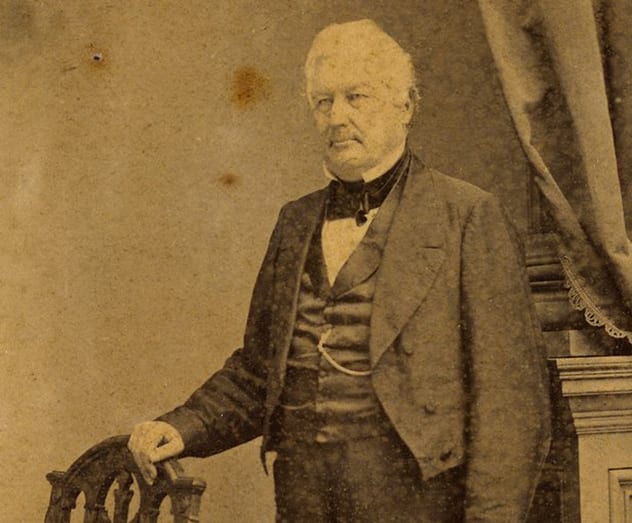 Millard Fillmore, better known as the 13th President of the United States, was also a member of a party known as the Know Nothing Party. While it is not uncommon for Presidents to also have been a part of secret societies, President Fillmore’s association with this group was a cause for slight concern due to their beliefs: that Catholics immigrants coming into the United States were attempting to take over the government. Fillmore and the Know Nothing Party consisted of Protestants, who believed that Catholics—and by extension, the Pope— directly opposed American values and what the government stood for. The party believed that immigrants should go through a twenty-one year naturalization processes to prove their patriotism and that Catholics, especially, should be removed from public office.

There was no concrete proof that Catholic immigrants were coming to the U.S. in order to overthrow the government and destroy American’s worth ethic. However, their views towards immigrants remained popular even though the party eventually dissipated.[2] 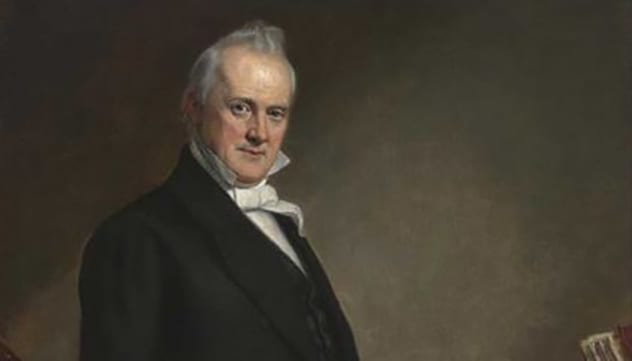 Assassinations have, unfortunately, been a part of presidential history. In the case of President James Buchanan, the 15th president of the United States, a conspiracy theory was spread in a manifesto named the “Addler’s Den” claimed that President Buchanan was going to be assassinated. The conspiracy theory claimed that President Buchanan was being targeted by a Southern group called “Slave Power” who were gaining influence in the government and attempting to overthrow the North.

Theorists also believed that President Buchanan was going to be assassinated and the theory knew exactly how: poison through sugar cubes. The manifesto claimed that all of the sugar cubes in the National Hotel would be poisoned, effectively killing President Buchanan and any Northerners who happened to be staying in the hotel as well, giving the Southern group more power.

Fortunately for President Buchanan, an avid tea-drinker who did use sugar cubes, nothing of the sort happened and he finished out his term unharmed— though the conspiracy theory then changed that the assassination attempt caused Buchanan to be a puppet for the South.[3] 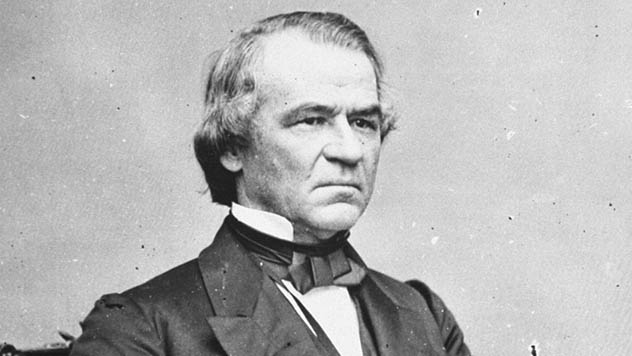 The theory claims that while Lincoln was, in fact, by John Wilkes Booth, Booth was acting on specific orders from someone on the inside: Vice President Johnson. This comes from the belief that John Wilkes Booth went also by the alias John St. Helen and confessed to his wife Finis Bates that Andrew Johnson and him discussed the death of Lincoln. The theorists also claim that Johnson provided Booth with the means to escape afterwards and that the inclusion of Johnson’s name on the hit-list was to ensure he would not be suspected afterwards.[4] 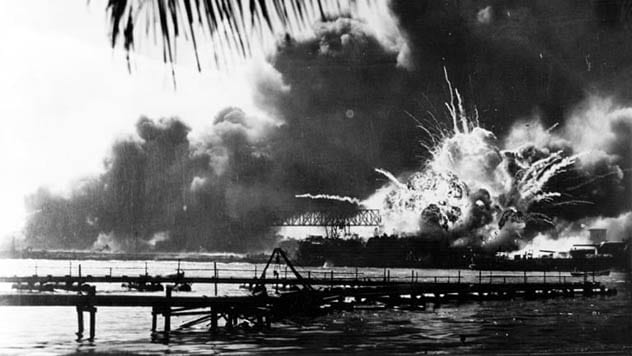 Theorists claim that not only was the United States government aware of it, but so was the British government, and they had plotted to push Japan into a position where they would ultimately attack the United States and turn public favor towards entering the war. Conspiracy theorists believe that the intercepted Japanese code which was deciphered stated that they would not only attack but also where they would attack.

While there is no concrete proof to support this conspiracy theory—many believe it is because it was a part of a cover-up as well.[5] 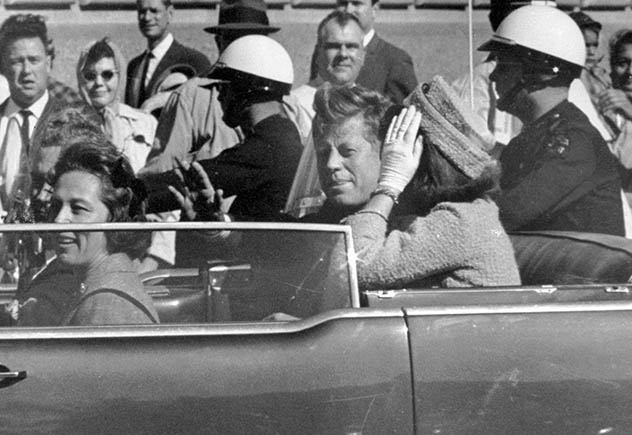 Like with Lincoln’s assassinations, there are no limits to the amount of conspiracy theories that can appear. One that has taken on a life of its own is that JFK’s assassination was a cover-up and Lee Harvey Oswald took the fall for another man: George H.W. Bush, future 41st President of the United States. At the time, George H.W. Bush was not in line for becoming President, in fact he wasn’t even a Senator just yet. Instead, it is theorized that George H.W. Bush worked for the Central Intelligence Agency (CIA), an agency he would one day become director of. 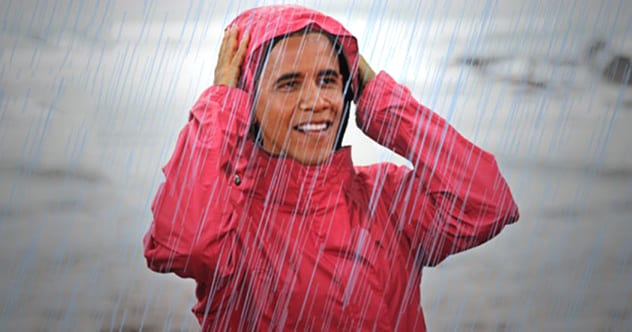 As the saying goes: when it rains, it pours. For President Obama, this statement can be applied both figuratively and literally according to some conspiracy theorists. A running theory claims that 44th President Obama created Hurricane Sandy in order to boost news in his favor. The theory states that Obama used his presidential power to order the use of the military’s research program called The High Frequency Active Auroral Research Program, or HAARP, to alter the Earth’s ionosphere in order to create a hurricane.

Why would Obama do this? To build reelection cred, of course. At the time, President Obama and Mitt Romney were dueling in out in the political realm, and Obama was facing harsh criticism of his ability to be a decisive and strong leader. Which could’ve put his reelection status at risk. According to theorists, his solution was to create a natural disaster that would turn the tides in his favor. He did this by using the HAARP, which is located in Alaska, to alter the frequencies of the weather and distract everyone from the upcoming election day.

The theory is a bit of a stretch but Obama did win his reelection, so maybe all hurricanes are actually the fault of Presidents rather than Mother Earth.[7] 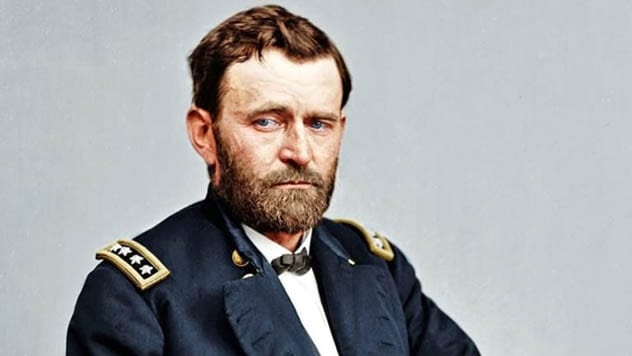 Some conspiracy theorists surround the Presidents, and some of them come from the Presidents themselves. According to the 18th President of the United States, Ulysses S. Grant, Jews were deliberately creating a cotton black market. At the time, Grant was not yet president, but was the commander of the military in the Tennessee region of the United States. There was no actual proof of those of the Jewish faith doing anything of the sort, but that didn’t stop Grant from ousting Jewish people from Tennessee, Kentucky, and Mississippi and prohibiting the issuing of trade licenses to them within the Tennessee region.

Grant then went on to establish that Jewish people who were inside of the Tennessee region only had 24 hours to leave before they would be risked with imprisonment. For the suspicion that they maybe, possibly, could-be involved with the cotton black market which was, at the time, largely keeping the South profitable in its war against the Union. Grant continued claiming that Jewish people behind the illegal cotton trade until President Lincoln called on him to revoke the order.

When running for president, Grant did claim that he had been influenced by the conspiracy that Jewish people were war profiteering and, once elected, placed a high number of Jewish people into office and made it a point to promote Jewish Human Rights.[8] 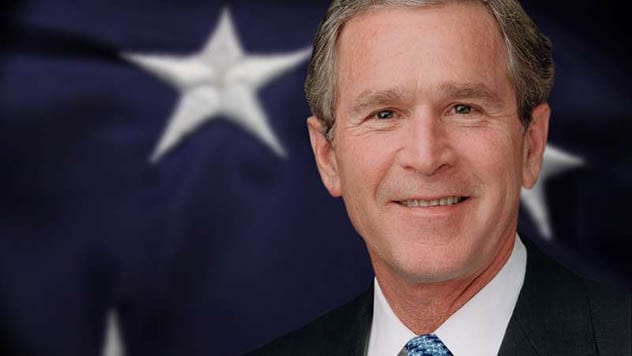 If you believe the current news cycle, most people associate stolen elections with Hilary Clinton and her run against President Trump in 2016. However, years ago, conspiracy theorists believed that another was involved with a rigged election: George W. Bush. The theory stems from the belief that in 2000, George W. Bush actually lost the election to Al Gore but due to rigged ballot counting in Florida and decisions regarding the recount Bush was elected instead.

Theorists claim that George W. Bush never had enough votes to win Florida, but due to his father’s (former President George H.W. Bush) ties within the government and the government’s intelligence agencies, the election was rigged in George W.’s favor and the United States Supreme Court’s stay order regarding recount choice was done so due to the pressure of the former president.

According to conspiracy theorists, George W. Bush’s reelection in 2004 followed the same route of his 2000 election, and this time he was aided by those who helped him with 9/11 to help him with the presidency and steal Ohio.[9] 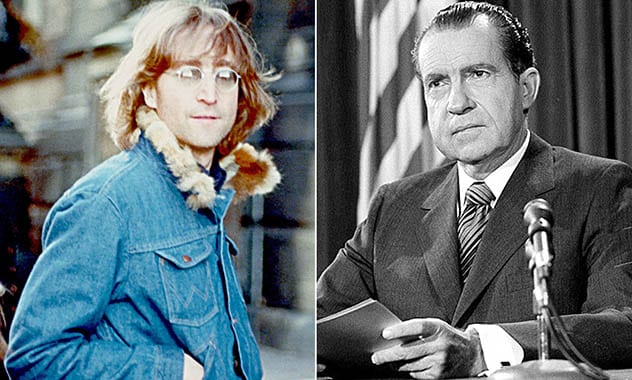 In probably one of the strangest conspiracy theories including President Richard Nixon, this may be the strangest. President Nixon, 37th President of the United States and most commonly known for the Watergate Scandal, was a very paranoid man. President Nixon was known to believe in conspiracies regarding the press, he believed that those of Jewish faith were born spies and were infiltrating the government, and he had a firm belief that there was someone out to get him. That person was, for a time, John Lennon.

Yes, you read that correctly. President Nixon created his own personal conspiracy theory that the Beatles’ guitarist and co-lead vocalist was out to get him as he was working as an agent for the Left. This was partially because Lennon was widely known for speaking his mind when it came to political issues and show support to different causes. Nixon viewed Lennon’s agenda as a sign of his affiliation with the Left and not only had Lennon wiretapped but then proceeded to have an order drafted, effectively deporting Lennon from the United States.

It was never confirmed if Lennon was an agent against Nixon or if this conspiracy theory was simply a creation of Nixon’s growing guilty conscience. Eventually, the deportation order against Lennon was dropped after Gerald Ford became president.[10]

For more lists like this, check out Top 10 American Conspiracy Theories That Are Completely Bonkers, and 10 Little-Known Facts About Area 51 Including The Real Conspiracy.