In the US, voting makes it possible for ordinary citizens to decide who will lead and represent them in their government. As such, it’s one of the most protected and assaulted rights in the nation.

Many times, people with political and economic agendas have suppressed others’ right to vote. Although the problem appeared to have subsided over time, recent laws show that voter suppression is alive and well in the United States. 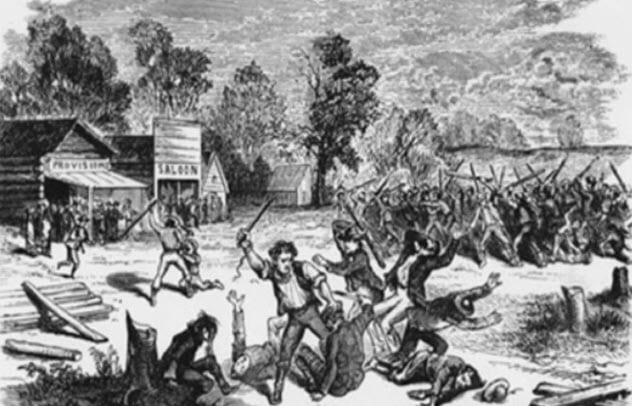 From 1789 until 1870, in general, only white men were allowed to vote in the US, which made voter suppression the law of the land. (Yes, we know there were limited exceptions for women and free African Americans.)

But even for white men, efforts to suppress some voters existed during that time. The most notable was the 1838 Gallatin County Election Day Battle. The conflict arose in Missouri over an election to choose a state representative.

Before the election, candidate William Peniston made a statement to Daviess County residents about the local Mormons. According to Peniston, if Missourians “suffer such men as these [Mormons] to vote, you will soon lose your suffrage.”

On Election Day, around 200 non-Mormons showed up in Gallatin to stop Mormons from voting. When a group of 30 Mormons arrived at the polling station, Dick Weldon, one of the men who wanted to stop them, said Mormons couldn’t vote in Clay County. Mormon Samuel Brown insisted otherwise, and a fight broke out between the two groups.

Reports of this incident suggested that casualties occurred on both sides, but the accounts proved false following an investigation by the Mormon Church.[1] 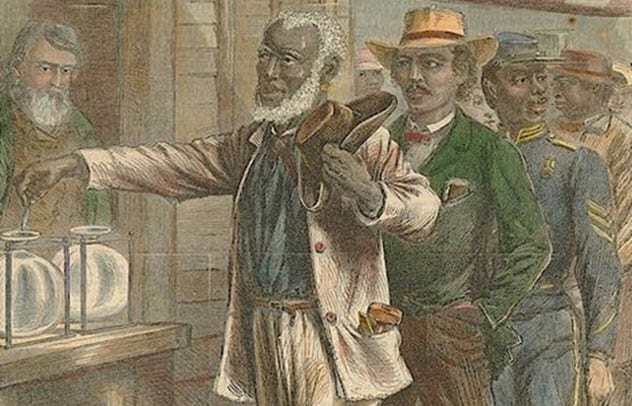 The 15th Amendment to the US Constitution kept states from denying the right to vote on the grounds of “race, color, or previous condition of servitude.” This gave former slaves the right to vote. However, the 15th Amendment also limited this right by what it didn’t say. Specifically, the amendment didn’t address any limitations that states could impose on those rights.[2]

The lack of restrictions gave rise to Jim Crow laws, which came in the form of literacy tests, poll taxes, and other restrictions. These rules were made into law, and the southern states wrote many of them into their new constitutions. As states could still regulate their elections, the US Supreme Court upheld these discriminatory voting laws well into the 20th century. 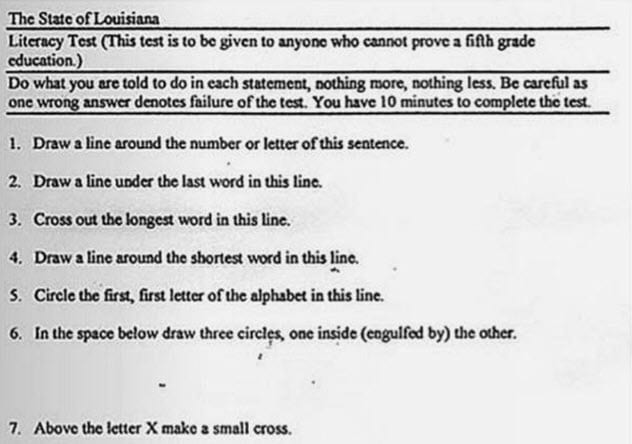 Between 1890 and 1910, 10 of the 11 former Confederate States voted out of office all the black representatives elected during Reconstruction. This was done through voter suppression, and the numbers of disenfranchised black voters were staggering.

During that time period, Louisiana reduced black voters by the tens of thousands down to only 730, which accounted for less than 0.5 percent of eligible black voters. A literacy test was commonly used to exclude these men.

Most newly freed slaves were illiterate, so they couldn’t pass the test. However, even literate men failed due to the way the tests were written. One exam from Louisiana asked questions such as “draw a line around the number or letter of this sentence” and “spell backwards, forwards.”

The questions were written so that almost nobody could pass them. But if someone did manage to answer the questions correctly, a registrar (white man) made the final decision. In most states, that meant no black people could vote.[3] 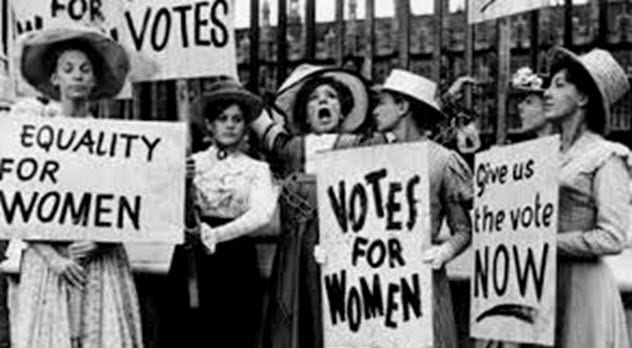 The most disenfranchised people in the US have always been women. In many areas of the US, women were not allowed to vote in federal elections from 1789 until 1920, when the 19th Amendment was passed.

Wyoming was the most notable exception because the state had granted full voting rights to women for over half a century before the passage of the 19th Amendment. Before Wyoming joined the Union in 1890, the legislature of the territory was firm in a telegram to Congress: “We will remain out of the Union one hundred years rather than come in without the women [having the right to vote].”

For the majority of women in the US, the right to vote was granted through the 19th Amendment. However, challenges remained for most women of color due to Jim Crow laws. Other women faced hurdles regarding their ethnicity or citizenship. Women who immigrated to the US weren’t always allowed to become citizens, and that was required for all voters in America.[4] 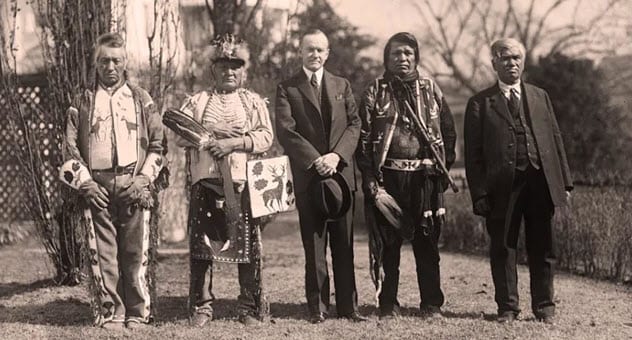 In the US, the only people allowed to vote in federal elections are the country’s citizens, but gaining citizenship isn’t easy for many people. There’s a serious problem with citizenship in the 21st century.

In the past, citizenship was especially difficult to obtain for certain groups, including anyone from China. Chinese immigrants didn’t receive the right to apply for citizenship until 1943. Except under certain conditions, Native Americans were also denied voting rights until 1924. 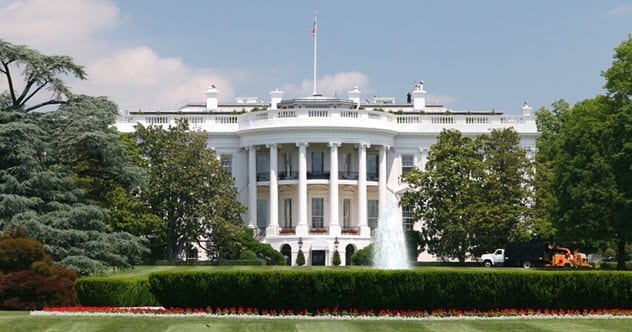 Politicians often say that the US Constitution is a perfect document. But it was far from perfect, and the Framers knew it. That’s why it can be changed, and this enabled their successors to fix unforeseen problems.

One such problem related to Washington, DC. The Constitution didn’t allow districts or territories to have members of the Electoral College. This wasn’t an immediate problem in the early 1800s because DC had less than 30,000 residents at the time.

However, this meant that anyone who was a resident of DC—regardless of gender or race—couldn’t take part in federal elections. It became an increasing problem as time went on.

The 23rd Amendment fixed the problem in 1961 by granting to Washington, DC, only as many Electoral College representatives as the least populous state had, which was three.[6] Despite DC only receiving three representatives, the amendment made voting in a federal election possible for more than 760,000 Americans at that time. 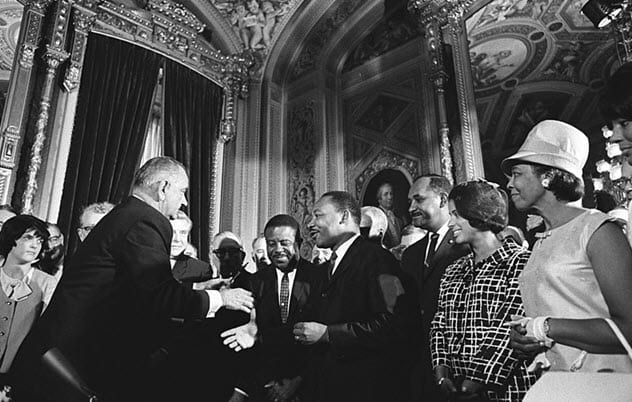 One of the biggest advancements in reducing US voter suppression came via the Voting Rights Act of 1965. Along with certain Supreme Court decisions made from 1962 to 1965, the Act removed obstacles for racial minorities to vote.

It extended those rights to language minorities, making it possible for citizens who didn’t speak English to cast their votes with everyone else. The Voting Rights Act of 1965 was a huge step forward, but it might not have been possible without the Civil Rights Act of 1964.

The Civil Rights Act required that voter registration rules be applied equally to US citizens of all races. However, it did allow jurisdictions to “qualify” voters in unfair ways. To combat this, the Voting Rights Act of 1965 forced individual states to stop using literacy tests and similar requirements to deny US citizens their voting rights.[7]

Despite these huge strides to fix many historical wrongs done to people of color in the US, problems with voter suppression continued after 1965. 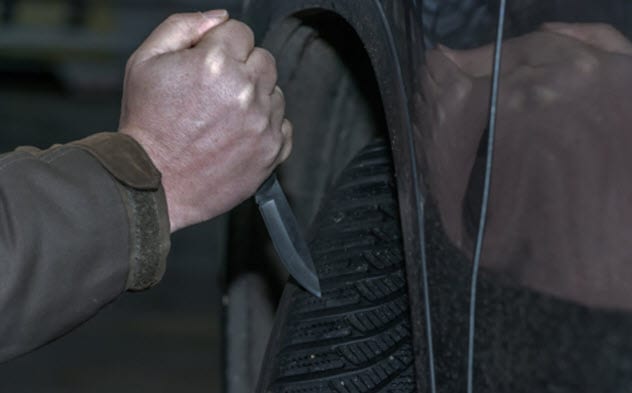 In the 21st century, efforts to stop people from voting continued. These ploys were often directed against groups who had previously fought to obtain full voting rights. For example, in the 2002 New Hampshire Senate election, Democratic groups in the state offered a ride-to-the-polls program for people who couldn’t get out to vote on Election Day. These voters are often poor people of color.

Republican officials paid telemarketers to call and hang up on the get-out-the-vote phone lines on Election Day. For approximately 90 minutes, this tied up the lines and made it impossible for the Democrats to call potential voters and offer them rides to the polls.

In 2004, Voters Outreach of America collected voter registration cards for thousands but threw out the ones for Democrats. Some Democrats who showed up on Election Day expecting to cast a ballot weren’t able to vote. At the time, Michigan’s Republican state legislator John Pappageorge said, “If we do not suppress the Detroit vote, we’re going to have a tough time in this election.”[8] The Republicans deny this version of events.

In 2006, four staffers for Democratic candidate John Kerry were convicted of slashing the tires of 25 vans that the Republican Party had intended to use for their ride-to-the-polls program. At the trial, the judge told the defendants, “Voter suppression has no place in our country. Your crime took away that right to vote for some citizens.”

2 Part Of The Voting Rights Act Is Ruled Unconstitutional
2013 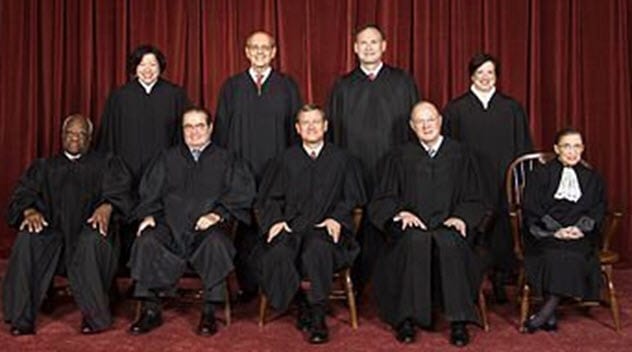 Even a law like the Voting Rights Act of 1965 can run afoul of the Supreme Court sooner or later. In 2013, the Justices ruled that Section 4(b) of the Act was unconstitutional.[9]

That section dealt with the prohibitions intended to suppress the minority vote via a coverage formula. Essentially, the Act required jurisdictions that had historically suppressed voting to be under greater scrutiny. This made it impossible to reenact the types of laws that had made the Act necessary in the first place.

By repealing parts of the Voting Rights Act of 1965, states could suddenly change their voting rules in ways that were once prohibited. However, those changes had to be cleared through the US Attorney General or a panel of three judges. But an old idiom describes what happened almost immediately, “Give a man enough rope, and he will hang himself.”

The fight against voter suppression was back on and very much real in the 21st century. 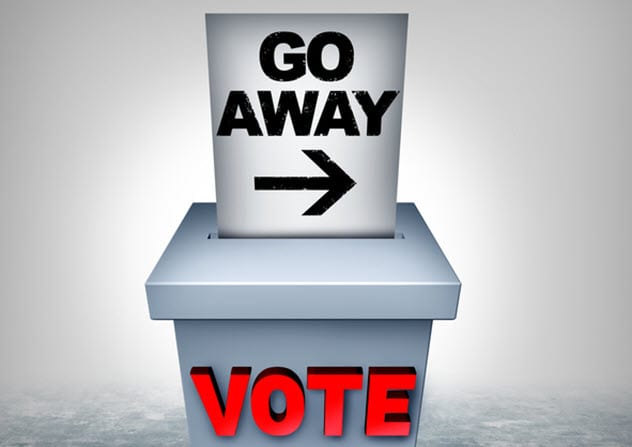 Shortly after the Supreme Court struck down part of the Voting Rights Act of 1965, states began changing their election rules. This was done in a number of ways, but the most significant were gerrymandering and identification requirements. Both targeted poor people and minorities who were largely Democrats.

Gerrymandering has long been a problem in the country. Although both parties are guilty of it, the recent wave of gerrymandering across the United States has largely been done by the Republicans to steal districts from their opponents.

Another new series of rules requires specific types of identification that some minorities lack. This can include a valid driver’s license, which a person might not have if he or she doesn’t drive. Other changes have made it hard to vote if a name on one form of identification doesn’t match that on another. This can happen for a woman whose maiden name differs on her birth certificate and her state ID.

According to the American Civil Liberties Union, 15 percent of Americans who earn less than $35,000 don’t have a government-issued photo ID, making them unable to vote in some elections. Other changes stop registration on Election Day or cut early voting time periods.[10]

For more lists like this, check out 10 Ways Politicians Use Psychology To Manipulate Your Vote and 10 Reasons Your Presidential Vote Doesn’t Count.