The car chase is a much celebrated, popular staple of action films. Whether racing through crowded city traffic or spinning up clouds of dirt during a bumpy backcountry pursuit, these cars are always driving at dangerous speeds.

In reality, though, police are often involved in low-speed chases. In fact, it is not unusual for them to barely break 48 kilometers per hour (30 mph) while pursuing a suspect.

Yes, the low-speed chase is alive and well. Here are eight that crossed the border into crazy country.

Charlie Durham is a native of New Zealand. A double amputee, Charlie uses a mobility scooter to get around his Timaru neighborhood. On at least one occasion, the older man maneuvered around the neighborhood with a police car hot on his tail.

In August 2019, Durham, then 60 years old, was spotted weaving in and out of traffic while riding his very low-speed scooter as police gave chase. A woman traveling in a car nearby quickly pulled out her cell phone and captured the entire slow-moving drama on video.

Thankfully, the crazy ordeal ended without Durham or anyone else getting hurt when police gently guided him to a driveway and a full stop. Apparently, Durham had refused to pull over earlier for two reasons. First, he thought the police car’s lights and siren were from an ice cream truck. He didn’t want ice cream. Second, he was in a rush to get home and get dinner ready.

Afterward, still miffed at being the target of the law, Durham said, “I thought [the policeman] was causing himself more harm and other people on the road than what he was to me. [ . . . ] There’s all sorts of things police could be doing rather than chasing me.”

In the end, Durham was slapped with a small fine for operating a mobility scooter inconsiderately. 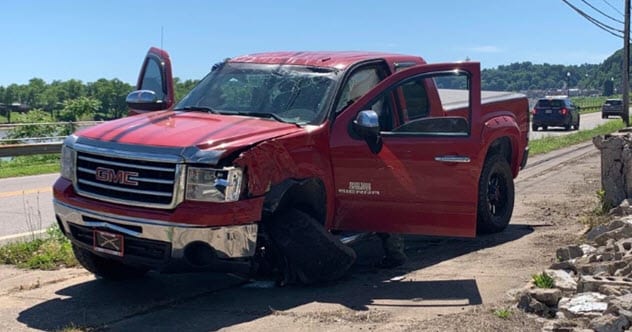 Sometimes, you just need to give up and accept whatever punishment is coming your way.

Try telling that to Jason Jenkins, 44, of Cheshire, Ohio. In early June 2020, he would not give up, even after turning his vehicle into a bumper car and seemingly hitting everything in his path.

It all started at a Taco Bell drive-through. Apparently, Jenkins rammed his red GMC truck into the vehicle in front of him three times. Then, understandably, he took off. Police picked up his trail and gave chase. That’s when things got even nuttier.

Clearly not having his best day of driving, Jenkins decided to one-up himself by crashing into a utility pole. His vehicle sustained significant damage, including a broken axle. But that didn’t stop him.

He kept going despite driving on only three wheels. His left front tire, now rendered inoperable, was simply dragged along with the others. By this time, with police on his tail, the man was driving at speeds barely cracking 32 kilometers per hour (20 mph).[2]

But, where there’s a misguided will, there’s a way. That’s why Jenkins persevered, crashing into not one, but two road signs—ironically, a stop sign and a speed limit sign.

Incredibly, the man ventured on, taking police through a red light, into a parking lot, back onto a road, then off-road, back onto pavement, and finally onto a sidewalk. There, his vehicle finally went kaput. All this while driving at a pathetic 32 kilometers per hour (20 mph).

When Jenkins refused to exit his vehicle, police gladly gave him a hand. He was detained by the officers and eventually charged with fleeing and eluding police.

6 Getaway Vehicle Is Great For Digging, Poor For Getting Away

Joyrides are a lot less fun when the police are chasing you and your vehicle is slower than the average 80-year-old out for a midafternoon stroll through the park.

One night in August 2017, then-18-year-old Austin White of Bourbonnais, Illinois, was clearly bored out of his skull. How else can you explain his decision to trespass onto a construction site and steal a bulldozer?

Driving around in the hulking metal construction vehicle, White was seeing the sights of Kankakee, Illinois, when he was rudely interrupted by three or four curious police cars.[3]

That’s when he either accidentally or—overcome by a death wish to end all death wishes—purposely backed over a police car while an officer was still in it. In the dashcam video taken by another police car following close behind, the terrified officer can be seen racing from his vehicle just as the 20-ton bulldozer turned his car into a metal pancake.

Police then slowly pursued White and his plodding stolen bulldozer another 12 city blocks before the whole crazy episode finally came to an end. When officers got their hands on White, they hurled him from the top of the bulldozer and tased him into submission.

Police arrested the 18-year-old construction vehicle enthusiast and charged him with six felony counts, including attempted murder and driving under the influence of drugs.

Modern sled dogs are typically mixed-breed huskies that have been bred for generations for their endurance, strength, and speed. These winter warriors average anywhere from 20–27 kilograms (45–60 lb), and their most important asset is—no surprise—their feet.

Long before any race starts, though, the average sled dog endures training that is comprehensive and exhausting. When training for the world-famous Iditarod race, mushers run their dogs for five hours a day, five or six times a week.

Maybe that’s why four sled dogs belonging to racer Jen Mignard immediately bolted when they got a chance in late 2019.

Mignard was in the middle of a training run to prepare her dogs for a mushing competition at Norm’s Island in Billings, Montana, when her sled tipped over. Unaware that they had lost their musher, Mignard’s dogs kept on running.

Initially, Mignard wasn’t concerned. Later, she explained to news media, “I thought, ‘Well this is no good,’ although I was sure they just would go back to my pickup.”[4]

Instead, they kept on going until a couple of officers spotted the canines on the loose and engaged them in a bizarre low-speed chase. Ironically enough, the officers—Dave Firebaugh and Jeremiah Adams—were K9 officers. In no time at all, they were able to apprehend the runaway pooches and return them to Mignard.

4 Escapee Not Cow-ed By Police 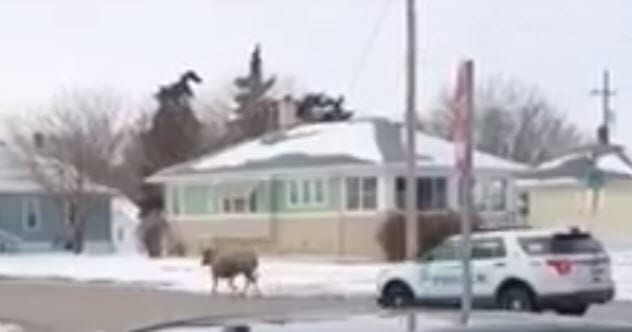 In February 2019, Grand Island, Nebraska, was the site of a strange scene that might someday provide the inspiration for a box office–busting Disney animated film. A lone cow trotted through a quiet residential area determined to escape the ugly fate of the rest of the herd. A witness captured the whole weird happening on video as two patrol cars entered the scene and gave chase of the low-speed variety.

The cow had escaped from the nearby JBS beef plant.

The police eventually caught the cow and put it down. Not suitable to be taken back to the beef processing facility, the cow was picked up by a rendering plant.[5] 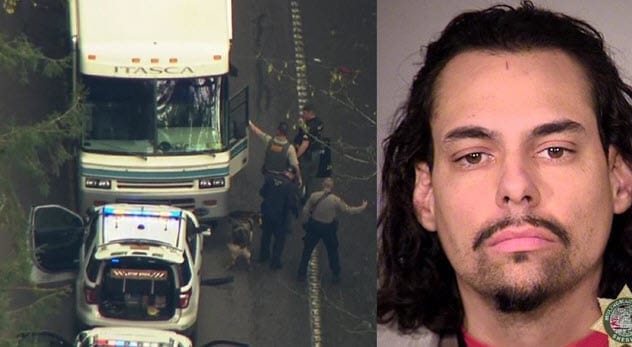 In April 2017, an RV driven by a Wisconsin man struck several vehicles on Sauvie Island just north of Portland, Oregon. Soon, police were on the scene and in pursuit. The 38-year-old RV driver, Shawn Wheeler, refused to stop.

Instead, he left the area, which attracted the attention of Washington County sheriff’s deputies. Now he had officers from two different levels of policing keen to stop his low-speed getaway.[6]

Eventually, Wheeler did stop. But it was only to put the vehicle in reverse and ram it into a patrol car. Soon, though, the RV driver was trapped by police vehicles pursuing him from both directions. Though caught and out of options, Wheeler simply refused to exit his vehicle. This went on for 20 minutes before police were able to get him out of his RV and into custody.

Wheeler was charged with an attempt to elude. No surprise, he also had a warrant out for his arrest concerning another incident.

2 Minivan Man With No Plan

Minivans do a lot of things well, but trying to escape the long arm of the law isn’t one of them.

Try telling that to a Los Angeles man who led police on a crazy low-speed chase in March 2020. Police spotted the vehicle weaving in and out of traffic and running red lights in midafternoon. As the minivan man drove, he occasionally stuck his arm out the window to wave at pedestrians.

Soon, the minivan escape machine ran into some trouble when the errant driver ran over a spike strip. He lost air in his left front tire but continued on. Then two other tires started losing air. That’s when it became a low-speed chase.

Suspected of being drunk—and guilty of being very determined—the man ventured on. Then two of his now-shredded tires fell off. At that point, he was driving on two rims and two tires. That’s when he decided to hop on the 105 Freeway. That brilliant move became his undoing as he quickly lost control of his vehicle and crashed into a guardrail.

Though he told officers that he was trapped in his vehicle, they got him out and slapped cuffs on him.[7] 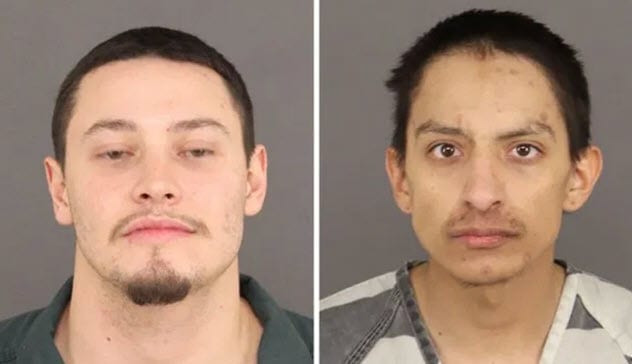 Maybe it made sense at the time. Maybe someone had told him that it worked for them. But when Nicolas Morgan-Flash, a passenger in a stolen pickup, decided to chuck tools out the window at the police chasing him and his cohorts, there must have been some sort of logic supporting that decision. Or maybe Morgan-Flash was just having fun.

Either way, the driver, 24-year-old Dominic Mendoza who had an extensive criminal history, took police on a tour of Adams County, Colorado, just outside Denver, in March 2019. Though it started as a high-speed pursuit, Mendoza ran over some “tire deflation” devices and involuntarily switched to a low-speed chase. Even so, he refused to give up.[8]

That’s when his passenger-partner Morgan-Flash decided to reach into a nearby toolbox and go to town. He hurled tool after tool at the police, who were hot on the suspects’ tail. But somehow, that didn’t stop the officers. Annoy them? Possibly. Stop them? No.

When the pickup thieves crossed into Denver, police officers from the Mile-High City joined in on the fun.

However, everything came to an abrupt halt when the pickup suddenly stopped moving. From there, Mendoza allegedly assaulted an officer, which caused another policeman to fire his gun. Thankfully, no one was struck by the bullet. Mendoza, Morgan-Flash, and a 17-year-old girl—who was also a passenger and had tried to flee the scene on foot—were apprehended.

About The Author: Domenico De Luca has been writing for 30 years—screenplays, short stories, and songs making up the vast majority of his output. Dom also writes, produces, and stars in his own homemade comedy series, Dom & Dommer. He’s also a film buff with his very own blog called so many films, so little time.