Saint Nicholas, the model for the modern Santa Claus, was not only a real person (and a Saint), but he was also known for many wonderful deeds that we all associate with the Holiday Season. Here are ten facts behind one of the most famous Saints. 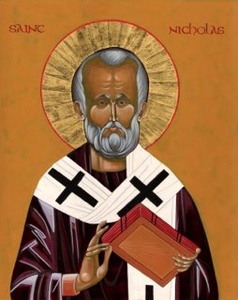 Saint Nicholas (in Greek: “Victory of the People”) the common name of a Lycian saint and Roman Catholic Bishop of Myra in Anatolia (in modern-day Turkey, though then it was a Greek-speaking Roman Province). He was born during the third century (around 270 AD) in the village of Patara. He had a reputation for secret gift-giving, but is now commonly identified with, and often as, Santa Claus.

9. What Did Saint Nicholas Do?

As the Patron Saint of sailors, Nicholas is claimed to have been a sailor or fisherman, himself. More likely, however, is that one of his family businesses involved managing a fishing fleet. When his parents died, Nicholas received his inheritance, but is said to have given it away to the poor. St. Nicholas was a working, albeit wealthy, man who complemented his day job with caring for his congregation as well as a full-time Bishop. 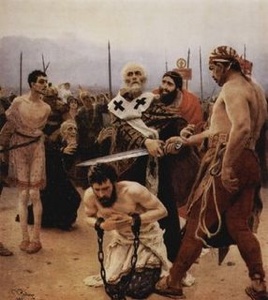 Not only was Nicholas intolerant of pagans, he was also intolerant of Arianism. Nicholas is listed as a participant in the First Council of Nicaea. There, according to legend, he became so angry upon hearing the views of Arius that he rushed over to the heretic and gave him a tremendous box on his ears, sending him to the ground. Nicholas is also known for coming to the defense of the falsely accused, often preventing them from being executed. He is also known for his intercession on behalf of sailors and other travelers. The popular veneration of Nicholas as a saint seems to have started relatively early. 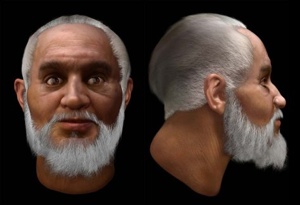 Whereas the importance of relics, and the business associated with pilgrims and patron saints, caused the remains of most saints to be spread over several churches in several countries, St Nicholas is unique in that most of his bones have been preserved in one spot: his grave crypt in Bari. In the summer of 2005, the report of his remains measurements was sent to a forensic laboratory in England. The review of the data revealed that the historical St Nicholas was barely five feet in height (while not exactly small, still shorter than average, even for his time) and had a broken nose. The photo above is of a forensic reconstruction of St Nicholas’ face based upon his skull x-rays and measurements.

6. Which Unusual Deed is St. Nick Known For? 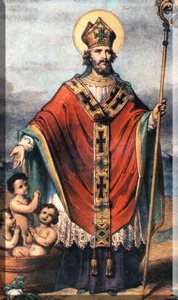 Another legend tells how a terrible famine struck the island of Myra. Since St. Nick is the patron saint of sailors, his exploits are explained when a malicious butcher lured three little children into his house on Myra, and killed and slaughtered them and put their remains in a barrel to cure, planning to sell them off as ham. Saint Nicholas, visiting the region to care for the hungry, not only saw through the butcher’s horrific crime, but also managed to resurrect the three boys from the barrel. 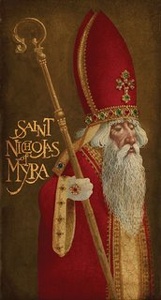 In his most famous exploit, however, a poor man had three daughters but could not afford a proper dowry for them. This meant that they would remain unmarried and, probably, in the absence of any other potential employment, would have to become prostitutes. Hearing of the poor man’s plight, Nicholas decided to help him. However, being too modest (or too shy) to help the man in public, (or knowing the man too proud to accept charity), he went to his house under the cover of night and threw three purses filled with gold coins through the window opening onto the man’s floor. 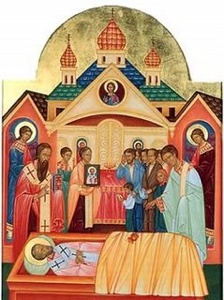 It is said that in Myra, the bones of Saint Nicholas each year sweated out a clear watery liquid, called Manna, which, of course, was said to possess immense powers. As the bones were stolen and brought to Bari, they continued to do so, much to the joy of the new owners. So even up to today, a flask of Manna is extracted from the tomb of Saint Nicholas every year on December 6th (the Saint’s feast day).

3. How Was the Saint Celebrated Then?

Today, Saint Nicholas is still celebrated as a great gift-giver in several Western European countries. According to one source, medieval nuns used the night of December 6th to anonymously deposit baskets of food and clothes at the doorsteps of the needy. According to another source, on December 6th every sailor or ex-sailor of the Low Countries (which at that time was virtually all of the male population) would descend to the harbour towns to participate in a church celebration for their patron saint.

2. Saint Nicholas: A Saint for a Season 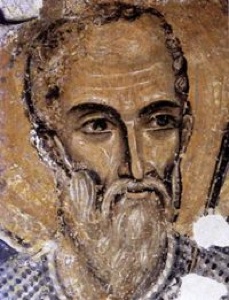 Saint Nicholas Day is a festival for children in much of Europe related to surviving legends of the saint, and particularly his reputation as a bringer of gifts. The American Santa Claus, as well as the Anglo-Canadian and British Father Christmas, derive from these legends. “Santa Claus” is, itself, derived from the Dutch Sinterklaas. Some elements of this part of the Saint Nicholas tradition can be traced back to the Germanic god Wodan (Odin). The appearance is similar to some portrayals of this god. In the Saint Nicholas tradition in the Netherlands and Flanders (Northern Belgium), he rides a horse over the rooftops, and this may be derived from Odin’s riding through the sky. 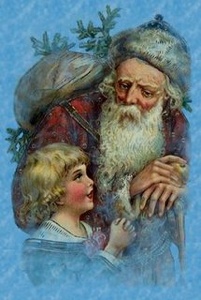 While feasts of Saint Nicholas are not observed nationally, cities with strong German influences like Milwaukee, Cincinnati and St. Louis celebrate St. Nick’s Day on a scale similar to the German custom. On the previous night, children put one empty shoe (or sock) outside, and, on the following morning of December 6th, the children awake to find that St. Nick has filled their previously empty footwear with candy and small presents (if the children have been “good”) or, ostensibly, coal (if not). For these children, the relationship between St. Nick and Santa Claus is not clearly defined, although St. Nick is usually explained to be a helper of Santa.