Stores, hospitals, entertainment venues, and other places where the public are together in large numbers use secret codes to pass information between store employees. These are meant to be a secret as they don’t want to alarm the non-staff members or alert someone (like a thief) that they have been noticed. Many stores have their own codes—for example, Walmart—but many are nearly universal in application. This is a list of ten secret codes that may prove useful to you in the future, or at least dispel any curiosity you may have if you hear them. 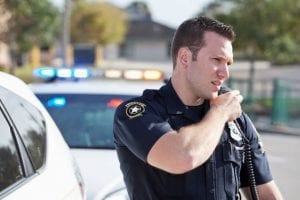 The Ten Codes are a list of codes used by law enforcement officers in the United States. They are available on the Internet, which would make them seem inappropriate for this list, but a large number of police departments have tried to have them made illegal for distribution, so they deserve mention. The codes were developed initially in 1937 and were expanded in 1974. The California Police use a variety of extra codes which predated the ten codes. For example, a 187 (one eighty-seven) means homicide. In the ten codes system, a 10-31 means that a crime is in progress, a 10-27-1 means homicide (the 10 is usually not said when it is a three-number sequence), and a 10-00 (ten double-zero) means “officer down—all patrols respond. Wikipedia has a complete list of the police codes here. 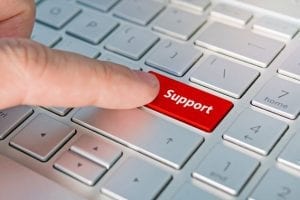 In computer support, a variety of codes can be used when referring to a customer. One of these codes has become fairly well known on the internet: PEBKAC (Problem Exists Between Keyboard And Chair), but various others are lesser-known. One of these is used when reporting a fault that has been fixed: “The fault was a PICNIC” (problem in chair – not in computer), or “ID 10 T Error” – ID 10 T is, of course, IDIOT. Let us hope that you never see this noted down on your file when a serviceman fixes your computer. 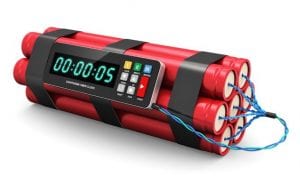 Time Check (usually taking a similar form to “Time check: the time is 12:00”) can be a code in stores for a bomb alert. It alerts the staff to follow the bomb procedure, which can either try to locate any suspicious packages or prepare to get the hell out. If you hear a time check in a store, it is probably a good idea to start moving toward the exit. Surprisingly—and shockingly, most stores that use this code actually expect their staff to search for the bomb—certainly an aspect of the job that most teenage checkout operators weren’t expecting when they signed up, I am sure. 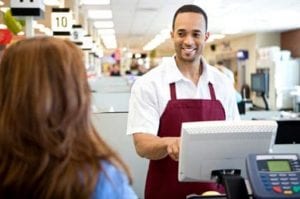 A code 10 in hospitals can refer to a mass casualty or serious threat (such as a bomb alert), but the majority of people experiencing a code 10 will do so for another far more common reason: a “code 10 authorization” is made by a merchant when he needs to call a credit card company to enquire about your card. This means that he is suspicious of you or your card and doesn’t want you to know it while he gets it checked out. When the credit card company hears that they have a code 10, they will ask a series of yes/no questions to the merchant to determine the situation. This will often result in the merchant keeping your card if they believe it is safe. This type of call often results in a call to law enforcement. 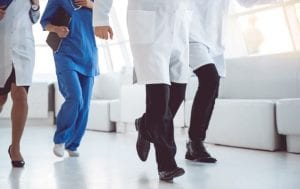 Hospitals page doctors all the time, and most people do not pay too much attention. But these can be codes for certain situations. “Doctor Brown” is a code word often used in hospitals to alert security staff to a threat to personnel. If a nurse or doctor is in danger from a violent patient or non-staff member, they can page Doctor Brown to their location, and the security staff will rush to their aid. A page for Doctor White is for a pediatric medical emergency in some states, while in others it could mean an external threat to the hospital. Some hospitals will also use the word “code” in their alerts/ A code silver refers to a person with a weapon, and code gray can mean a violent person without a weapon. Hospitals have a huge array of various codes to describe all manner of situations. They often differ from hospital to hospital, and they are usually not internationally recognized. 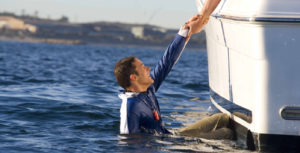 On a ship, a code oscar means someone has gone overboard. If the ship has to maneuver erratically to handle the situation, it must also send out blasts on the signal so that other ships nearby are aware that it is about to change its course. It should be noted that ships don’t have an internationally standardized set of PA signals, and they can differ from place to place, but this is a fairly commonly used one. Oh, and a code delta can mean a biological hazard—though who knows what that might be on a passenger ship. And finally, Code Alpha often means “medical emergency.” 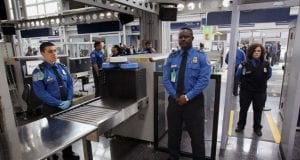 Code Bravo is the code phrase for a general security alert at airports. Unlike most of the codes on this list, the code is meant to cause alarm—but not through knowing what it means: when this alert is raised, all of the security agents will begin to yell “Code Bravo” to frighten the passengers. This is supposed to make it easier for the agents to locate the source of the problem without interference from the general public. For those of you who travel on ships from time to time, you may like to know that Code Bravo means “fire,” and it is the most serious alert on a ship—if it burns, you either get off or burn with it. Ships also often use sound signals, such as 7 short and 1 long, meaning “man the lifeboats.” 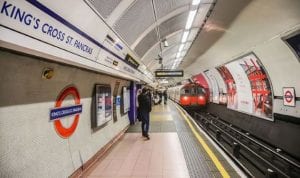 Inspector Sands (or sometimes Mr. Sands) is a code for fire in the United Kingdom. Obviously, it would not be appropriate for the service staff of a store to announce a fire publicly, so this code is used to alert the appropriate staff to the danger without upsetting customers. The wording differs from place to place, and in the Underground network, a recorded “Inspector Sands” warning is automatically triggered by smoke detectors. In some shops, you will hear the code used in a phrase such as “Will Inspector Sands, please report to the men’s changing room” if the fire is in the men’s changing room. It was played on a continuous loop through the Underground during the July 7, 2005 bombings, and has been incorrectly described as a code word for a bomb—the frequently used code for a bomb in the Underground is “Mr. Gravel,” for example, “Mr. Gravel is in the foyer.” Mr. Sands (or sometimes Mr. Johnson) is also used in theaters in the case of fire. 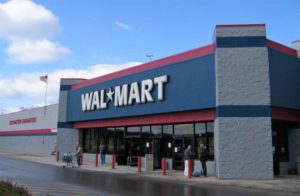 Walmart gets its own item on this list because they have many codes that are store-specific. Some of their codes should not worry you. For example, a code 10 or a code 20 just means that there has been a dry spill or a wet spill—the biggest danger this poses to you is that you might slip. A code 300 calls for security, and a code orange means there has been a chemical spill. But here are the ones you really need to worry about: Code red means there is a fire in the building—get the hell out if you hear this. Worse still, a code blue means there is a bomb in the building. Exit swiftly, but don’t run, in case they think you planted it. Code green means there is a hostage situation, and a code white means there is an accident. The one you are most likely to hear is a code “C” which is simply a call for customer service (usually meaning that more cashiers are needed). And finally, the most famous Walmart code… well, it’s so famous it needs its own item: 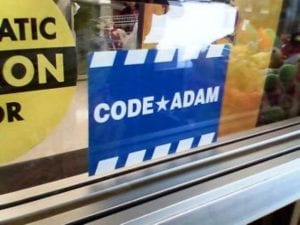 Walmart invented code Adam, but it is now an internationally recognized alert. It means “missing child.” The code was first coined in 1994 in memory of Adam Walsh, a six-year-old boy who went missing in a Sears department store in Florida in 1981. Adam was later found murdered. The person making the announcement will state, “we have a code Adam,” followed by a description of the missing child. As soon as the alert is heard, security staff will monitor the doors and other exits. If the child is not found within 10 minutes, the police are alerted, and a store search begins. Also, if the child is found in the first 10 minutes in the company of an unknown adult, the police must be called and the person detained if it is safe to do so. In 2003, the U.S. Congress passed legislation making a “Code Adam” program compulsory in all federal office buildings. A similar alert is called an AMBER alert, an acronym for “America’s Missing: Broadcasting Emergency Response,” but initially named for Amber Hagerman, a 9-year-old girl abducted and murdered. Code Ambers can also be heard in stores and other locations in the United States.