I remember growing up as a kid in the 1960’s and 1970’s and seeing the many different “men’s adventure” magazines. These were usually called “pulp” magazines, and they always had covers depicting, as Jay leno once quipped: rag tag bunches of GI’s risking their lives to rescue their comrades from Hitler’s elite D-Cup Brigade. These magazines were also sometimes referred to as “sweat magazines” because the men depicted on the cover were usually covered in sweat from fighting off Hitler’s D-Cup girls or wild beasts. My grandfather had a subscription to one or more of these pulp magazines and I remember sneaking a look at them when we would go visit him and my grandmother. I also remember seeing these magazines along with the piles of hunting and fishing magazines at the barber shop.

These men’s adventure pulp magazines were very popular in the 1950’s-1960’s, before Playboy and Penthouse came along (and later, magazines like Maxim and Men’s Health). They were popular for several reasons. For one, they were cheap, usually costing only a quarter. For another, they were pretty much all that was out there for the “adventure seeking man” of the mid-20th Century. But mostly, these magazines were meant to appeal to a different generation of American male – one not concerned at all about physical fitness and how to achieve six-pack abs or the best way to remove their chest hair. These were men who (mostly) served in World War II and Korea and saw themselves as rugged individualists who knew danger, death, fear, and survival (or at least fantasized that they had experienced it ).

For each magazine, a brightly colored magazine cover was created by artists in such a way as to appeal to these male fantasies – rescuing scantily clad and always well-breasted women from savages or Nazis, surviving in the wilderness, going on African adventures, fighting Indians and cattle poachers in the old west, and my most favorite of all magazine cover topic – surviving attacks by vicious animals!

There were, at the peak of pulp magazine popularity, about fifty such magazines, but my favorite has to be “Man’s Life” mostly because it seemed to specialize in all manner of crazy animal attacks. The trick was always the same, get an artist to paint a compelling and evocative cover and then get a writer to create a “true life” story around it. And the artists seemed to get more and more creative in trying to top the previous month’s animal attack, year after year. But always, there were familiar themes in every cover involving attacks by animals. So here are ten of the very best “man versus animal” covers from the classic, Man’s Life magazine.

10
Chewed To Bits By Giant Turtles! 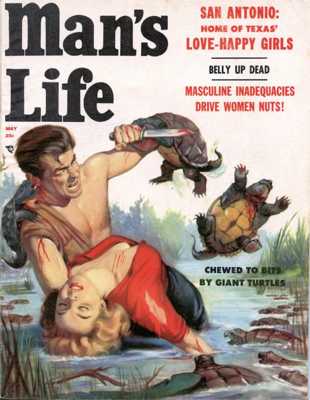 The cover shows the classic man’s adventure magazine guy, his shirt is torn, and he is bleeding from attacks by leaping and vicious snapping turtles! Now I have had the misfortune myself of running afoul of these fearsome creatures, and let me tell you they are not to be messed with. Their jaws are like steel traps, strong enough to sever a finger or other important male appendage. And I know every single time I have had to fight for my life against the deadly hordes of snapping turtles, I have had a passed out and scantily clad honey in my one hand as I wield my trusty knife in the other. What I never realized, until I read Man’s Life magazine, was that snapping turtles attacked in waves, and that they could leap out of the water! 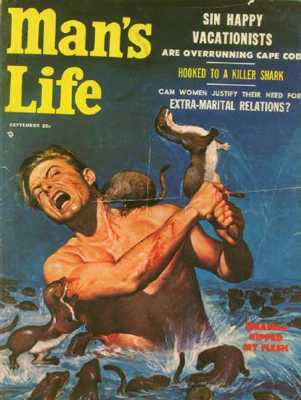 Usually only 9-18 inches long with slender bodies, weasels are known for their cleverness and guile. Most people know them as small fur-bearing creatures that hunt rodents in their burrows. Fewer realize they are also blood-thirsty man killers! Weasels love the taste of man flesh and should a careless and unsuspecting man wade waist deep into a body of water, they risk being attacked by a plethora of these killers. If so, the only hope of survival is to grab one or more weasel in your hands and use them as a weapon to ford off the others. This Man’s Life magazine cover and title was the inspiration for the 1970 album by Frank Zappa and the Mothers of Invention of the same name. 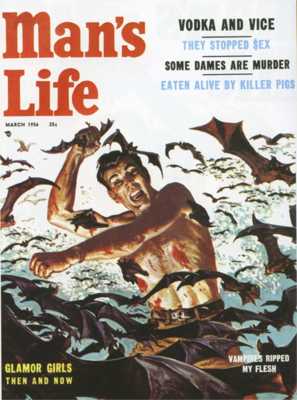 The flesh of mid-20th century males was extremely tasty to a wide variety of Earth’s deadly creatures, as one can tell by the number of documented cases where men had to fight off animals that literally “ripped their flesh”. Here we see, in the March 1956 issue of Man’s Life, a man fighting for his life against attacking vampire bats! Clearly he must have become trapped in the vampire bat cave with no knife. So he did the only thing a mid-20th century man could do to save himself – he used his bare fists! Everyone who has ever seen a bat dart and move through the air knows how easily they can be defeated by punching them out of the sky. Like most men attacked by these flying vermin, he had no shirt on, exposing his tender, juicy flesh to their sharp blood-sucking teeth. This issue also has a story entitled “Eaten Alive By Killer Pigs” which I guess did not make for a better magazine cover, so the bats won out.

7
Strangled by a Giant Gorilla! 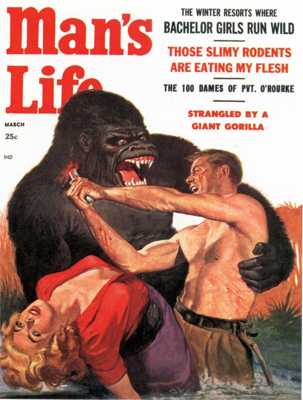 A close cousin to the feared Mountain Gorilla, the much rarer Kenyan River Gorilla is known to attack any blond woman with a red blouse who enters his territory. He has just such a victim in his arms, and she has apparently passed out, eyes wide open in fright as her hero fights the gorilla in waist deep water with nothing but his knife. He plunges the knife into the beast’s neck, which only enrages the gorilla. Can they survive? Buy this issue and find out, along with a related true life survival story called “Those Slimy Rodents Are Eating My Flesh!” 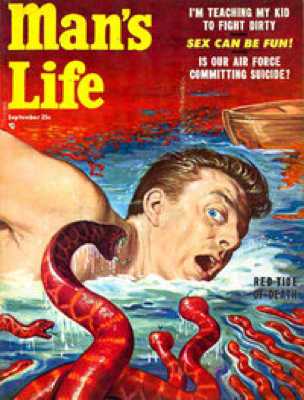 Bodies of water were very dangerous places for shirtless mid-20th century males to go, as one can tell by the sheer number of crazed animals willing to feast on victims foolish enough to enter their watery realm. Here we have a man desperately swimming for safety aboard a typical wooden life boat, as he is pursued by swarms of swimming red snakes! In fact, there are so many snakes in the water, it has turned the stream or lake into a slithering and deadly red tide of death! Will he make it to the life boat before he is bitten to death! Can he even swim through this tide of crawling and slithering reptiles? And will there be a near-naked and large breasted mid-20th Century lady waiting for him on the boat when, and if, he makes it? Read this issue to find out.

5
Trapped in a Sea of Giant Crabs! 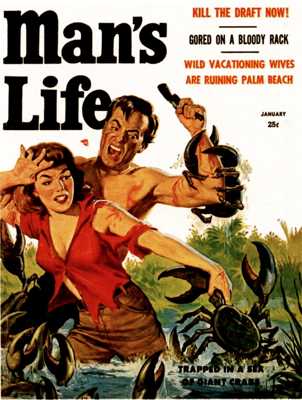 Once again our mid-20th century man and woman make the unforgivable mistake of entering the water. This time they meet marauding giant crabs intent on eating them alive with their giant pinchers. Our hero (the man) has a pistol but obviously he has spent all six shots already, probably fighting off native savages on the island in order to rescue his beautiful red head. So he can do nothing but use the gun to pistol-whip the crabs into submission. As for the red-headed damsel in distress, she is cut and bleeding and her torn blouse is only one straining button away from bursting totally open.

4
The Island of Man-Eating Rats! 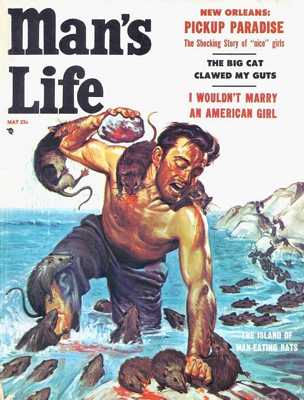 Trapped and alone on the island of man-eating rats, our mid-20th century male does the only thing he can do to survive. That’s right, he enters the water! But these are not just man-eating rats, they are also amphibious man-eating rats! So his fiendish plan to escape their evil rodent jaws is once again foiled. He has no choice but to rip off his shirt and fight back with his bare hands and rocks, bashing the rats as they rip off chunks of his man body flesh. Also in this issue – “The Big Cat Clawed my Guts!” If only he had the big cat to help him with the rats.

3
Attacked by the Furred Furies of Hell! 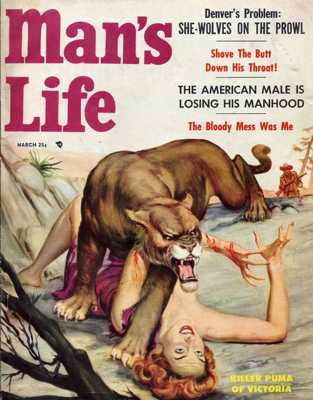 It is difficult enough to try to fend of furred furies from hell. But to also have to protect your woman and attempt to hide her modesty with your one free arm by holding her unbuttoned blouse together, man that takes the talent of only the most adventurous and sweating mid-20th century male. But this guy does it and he does it well. A furred fury is ripping the flesh off his face as he tries to protect it with one hand, while he wraps the other around the waist of his gorgeous red head. And of course, they are waist deep in water, the natural habitat of all furred furies of hell. Unfortunately, this cover can’t be found online at present so an alternative is shown above.

2
Trapped in the Web of Creeping Death! 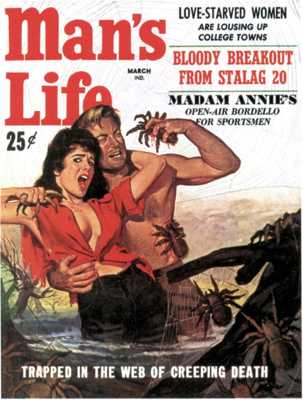 There must have been something about streams, lakes and oceans in the mid-20th Century. Anyone who entered into them up to a level of waist deep was bound to be attacked, many times by animals that had no business being anywhere near the water. In this case, our hero and heroine are being swarmed by deadly, flesh-eating giant spiders! They have blundered into a giant spider web, attracting the attention of the giant spiders that feed only on humans. He, of course, has no shirt, she a red blouse barely hanging on by a single button. Like most mid-20th Century damsels in distress, her blouse is always a single button or two away from exposing her naked breasts. He has no knife, no pistol. They have only their wits and their bare hands to fight off the swarms of spiders. 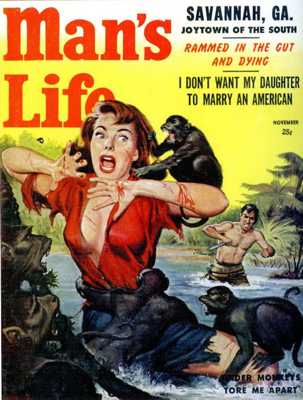 Just like most furred mammals, streams are the natural habitat of all crazed, man-killing spider monkeys (well, that and Mars).Once again, we see our mid-20th Century man and woman foolishly enter the water, only to be set upon by huge groups of vicious spider monkeys. This time, the flesh is being ripped off the woman as her male hero races through the water, knife in hand, to save her. But can he reach her in time before her already unbuttoned blouse become fully open and exposes her breasts! The look of naked terror in her eyes is saying to the monkey sitting on her shoulder – “don’t touch my red hair you damn dirty ape!” 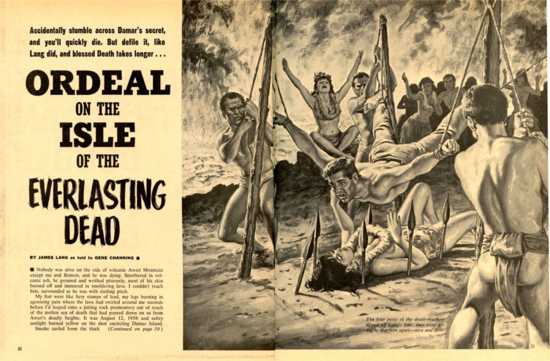 This Man’s Life magazine cover breaks with tradition in several ways. First and most obviously, it is zombies and not animals that are emerging from the water to attack our brave mid-20th Century male and female. Second, both of them are fully clothed (the man has his shirt on!) and they both are armed, him with a rifle, her with a pistol. The ammo belt around her waist is also very becoming. But most of all, they are both, (for now, anyway) wisely, out of the water! They were obviously on a romantic safari vacation to the Pacific paradise Isle of Damar. Only, unknown to them, this seeming paradise is actually a living hell where the dead walk the Earth! Or at least, swim in the ocean. The zombies will do more than rip the flesh from their bodies. They will also eat their brains and internal organs. If they enter the water.