Caves are often musty, muddy, and damp. They can also be teeming with wildlife, as wide as a canyon, or flooded with icy water. They can be made of marble, crystal, or basalt. Caves are far more than just holes in the ground. Some of them are quite extraordinary. 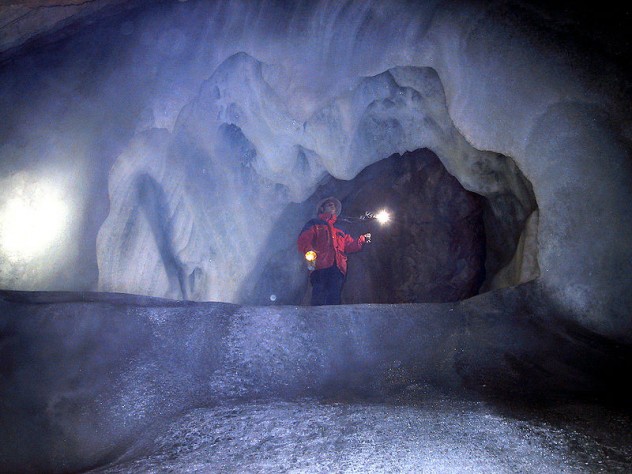 The Eisriesenwelt Cave in Austria is the world’s largest ice cave, with a length of almost 50 kilometers (30 mi). Its name translates to “World of the Ice Giants.” Discovered in 1879, its myriad chambers are interconnected, allowing air to flow through all chambers. This also means that the caves can get chilly, so winter wear is appropriate for all visits. The ice formations are different colors due to the mineral content.

The caves are located above Werfen Village in Salzburg. Lamps are handed out to tourists before the tour, and sometimes the ice formations are lit with magnesium lamps for dramatic effect. Only a portion of the cave’s length is open to the public. 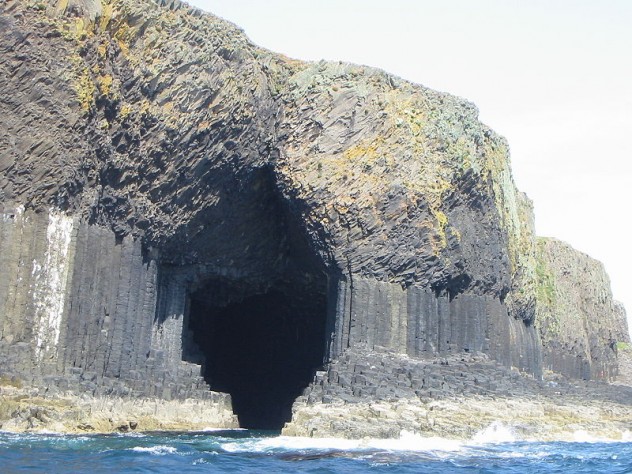 Staffa Island is an uninhabited island off the coast of Scotland. It’s host to several sea caves, the most famous being Fingal’s Cave. It is also called Uamh Binh, or Cave of Melody.

Fingal’s Cave is 70 meters (227 ft) long and is made entirely of interlocking hexagonal pillars of basalt—similar to those found at the Giants’ Causeway—possibly formed by prehistoric lava flow and a tumultuous sea. In 1829, composer Felix Mendelssohn visited Fingal’s cave, and the sound of the waves inside became the inspiration for his Hebrides Overture. He didn’t enjoy the trip much though; Mendelssohn got seasick. 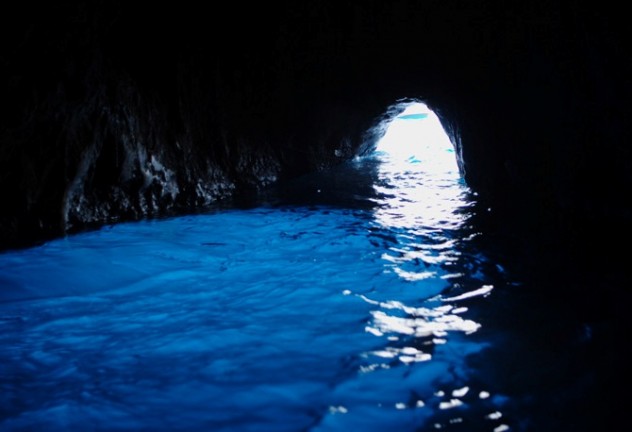 The Grotto Azzura is Capri’s most famous tourist attraction. It’s a half-flooded sea cavern that is filled with an eerie blue light. In the Roman period, the cavern was said to be the home of nereids, sirens, and devils.

The blue light is caused by sunlight filtering through an opening near the water’s surface. Anything immersed in the water also appears silver, due to bubbles in the water. The best time to visit the Blue Grotto is early afternoon, when the sunlight shines directly outside the cave. 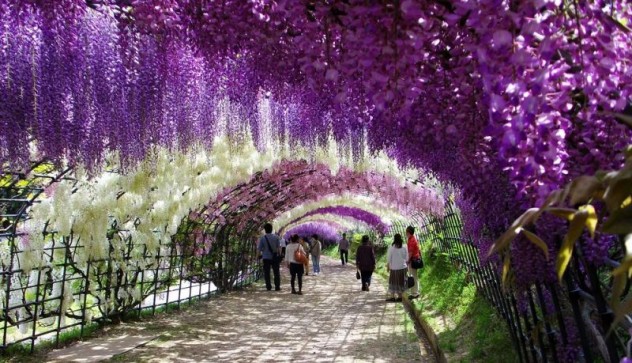 The Kawachi Fuji Gardens are home to a dazzling display of wisteria arranged in a tunnel. About 150 wisteria plants of at least 20 species are grown in the garden, each blooming purple, white, blue, violet-blue, or pink. The best time to visit the gardens is from late-April to Mid-May, when the “Fuji Matsuri” or “Wisteria Festival” is held. The peak season is toward the end of April. Any visit outside of that time period would mean that the wisterias are not in bloom, and most of them are a “disheartening mass of lifeless branches,” according to Atlas Obscura. 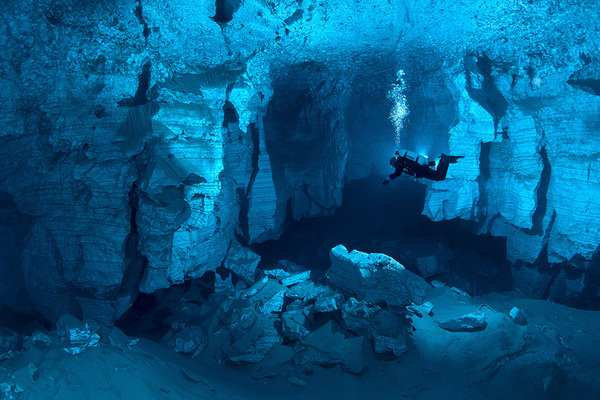 Ordinskaya, or the Orda Cave, is the longest underwater cave in Russia and the world’s only known underwater gypsum cave. Its length is almost 5 kilometers (3 mi) of cavern with water so clear that divers can see nearly 45 meters (150 ft) ahead of them. There are also no currents in the cave.

The Orda Cave is not a good place to get lost in. Smaller passages and caverns leading away from the main cavern are still being found. The water is a freezing -20° Celsius (-4° F) at the surface, and any cave surface you touch can easily break off. Cave diver Lamar Hires says that he has seen chunks of gypsum as large as cars and buses fall from the walls and ceiling. 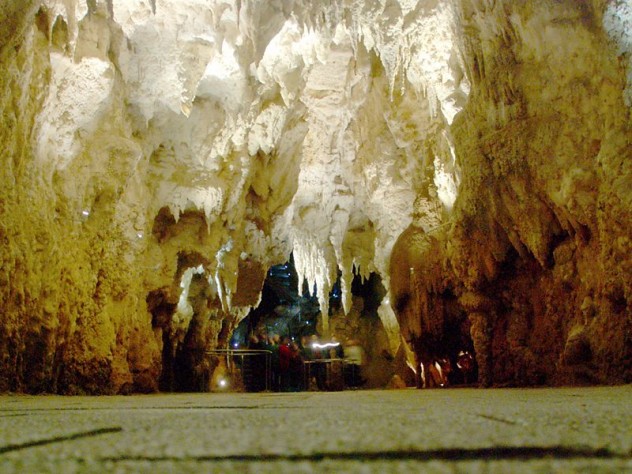 The Waitomo Caves are home to a species of glowworm native to New Zealand: Arachnocampa luminosa. They glow in order to draw insects closer, luring them into the silky threads that the glowworms produce and their inevitable tangled doom. Thousands of these glowworms live in the Waitomo Caves, which have become one of the main attractions of New Zealand’s North Island. The Glowworm Grotto is navigable by boat—under the lights of the hundreds of glowworms on the ceiling. The upper chamber includes the Organ Loft and the Catacombs, while the lower level is home to the Cathedral Chamber, whose acoustics are acknowledged by international opera stars. 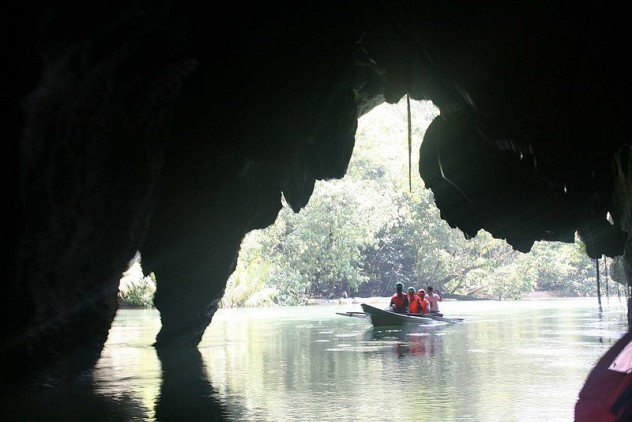 The Subterranean River in Palawan, Philippines, also called the St. Paul Underground River, was established as a national park in 1971. It is an 8-kilometer (5 mi) river that flows straight into the sea. Along the way, it flows through a cave, zipping by some of the most beautiful limestone formations in the world. Some of these formations resemble animals, mushrooms, and people. On January 28, 2012, the subterranean river was named one of the new Seven Wonders of Nature.

Only 4 kilometers (2.5 mi) of the river is accessible to tourists. A special permit is needed if one wants to travel the entire river’s length. 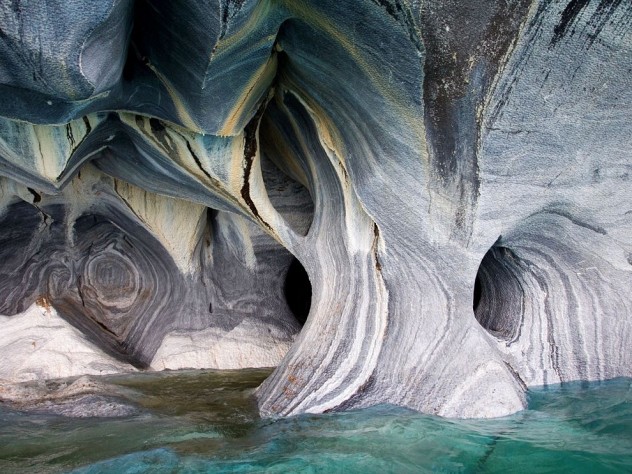 The Cuevas de Marmol, or the Marble Cathedral, is a cave carved into Chile’s General Carrera Lake, which spans the Chile-Argentina border. Visitors have quite the trek: They must fly from the capital to the lake city Coyhaique, then drive 320 kilometers (200 mi) south to the lake. But the long journey is worth it when viewers are rewarded with crystal-clear water and beautifully patterned walls of marble. The caves are only accessible by boat.

The cave was formed 6,000 years ago by waves crashing into calcium carbonate. The color of the water varies with the weather, water level, and the time of year.

The Lubang Nasib Bagus, or the Good Luck Cave, is famous for the Sarawak Chamber—the largest cave chamber in the world. It is located in Gunung Mulu National Park in Borneo. Its estimated ceiling height is 100 meters (320 ft), and its maximum dimensions have been estimated to be 700 x 400 meters (2,300 x 1,300 ft). The chamber is so large that eight jumbo jets could fit along its length of the chamber, and it could be a (rather inaccessible) garage for 7,500 buses. All the caverns of the Good Luck Cave were created by running water as “early” as five million years ago. Other caves found in Lubang Nasib include the Cave of Winds, and the Cave of Happiness, among others. 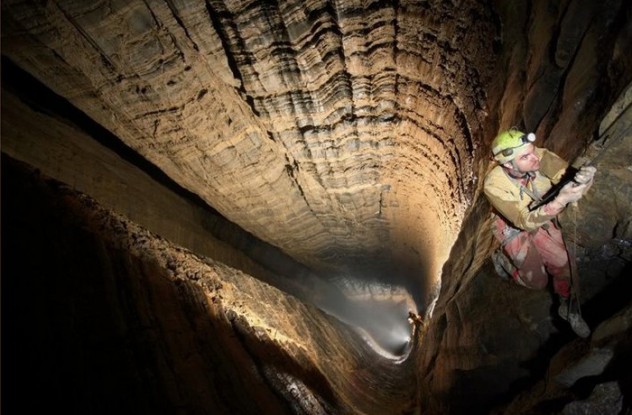 In 2001, the Krubera Cave, alternatively called the Voronja or Voronya Cave, was named the deepest cave in the world. In October 2004, scientists estimated its depth to be 2,080 meters (6,800 feet). The cave is located in Abkhazia, a republic that belongs to Georgia but claims to be an independent state.

In order to reach the lowest depths of the cave, spelunkers from the Hebrew University of Jerusalem dove through water barely above freezing. They also experienced a flash flood that left them isolated for 30 hours. At depths of over 300 meters (1,000 ft), several life-forms have been found, such as cave pseudoscorpions, parasitic worms, and transparent fish—in near zero-degree water.