Who could ever forget Tank Man, that unknown man who stood in front of all those tanks at Tiananmen Square? As epic as that act of defiance was, there are other classic examples that are spun from the same material as Tank Man’s story. The amazing acts of defiance listed below are veritable legends and, as such, deserve their own rightful place in history.

10Captured US Crewmen Flipped Off Their North Korean Captors 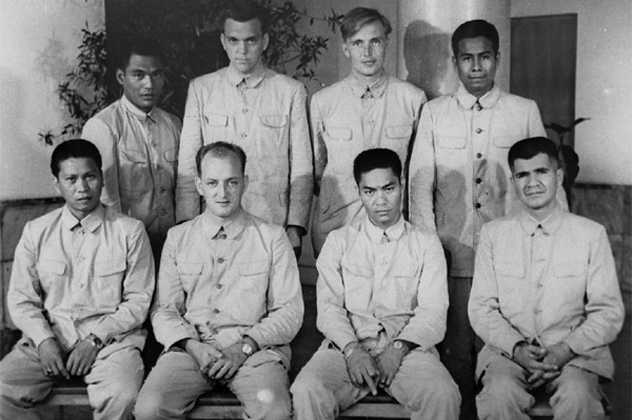 If you’re an enemy captured by the North Koreans, chances are you will be brutalized. That is exactly what happened in January 1968 when North Koreans captured the USS Pueblo and imprisoned its crewmen for almost a year. During their captivity, the men had to endure inhumane living conditions coupled with torture and forced indoctrinations. They also became unwilling propaganda tools and regularly appeared in photos as proof of North Korea’s superiority and benevolence.

Luckily, the men discovered a clever way to undermine all that propaganda. Upon finding out that the North Koreans didn’t understand the meaning of the middle finger, the men began showing the gesture during their photo shoots, explaining to their clueless captors that it was merely a good luck sign with Hawaiian origins. This went on for quite a while; after the North Koreans found out, they severely beat the men for a full week. Following the men’s release, the US did its own version of flipping North Korea off by retracting an earlier apology.

9The Man Who Refused To Do The Nazi Salute 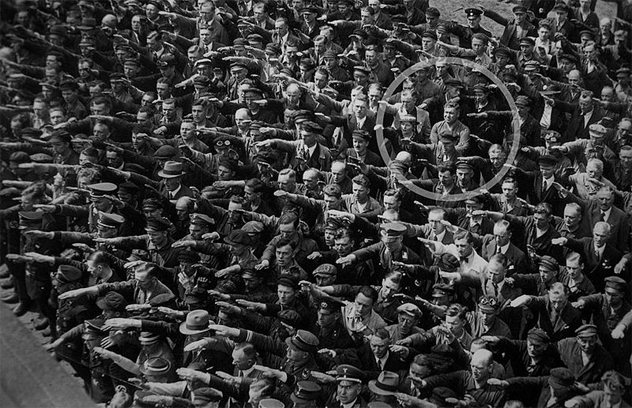 This awesome, not-so-subtle act of defiance should have been mentioned in our previous list of people who stuck it to Hitler. A photo taken in 1936 commemorating the launch of a new training ship in Hamburg showed how one man named August Landmesser refused to do the Nazi salute with his co-workers. Instead, he simply crossed his arms and looked smugly at the new ship.

Landmesser’s defiance stemmed from forbidden love. The Nazi Party expelled him from their ranks after they discovered that he had continued to live with his Jewish wife, a woman named Erma Eckler. Eventually, the Nazis forcibly separated the husband and wife for good. They had Eckler euthanized in 1942 and gave Landmesser a virtual death sentence by conscripting him to a penal battalion in 1944. Fortunately, the couple’s two daughters survived the war and have since made it their mission to spread the story of the brave man who dared to defy the Nazis.

8Everything Emil Kapaun Did During The Korean War 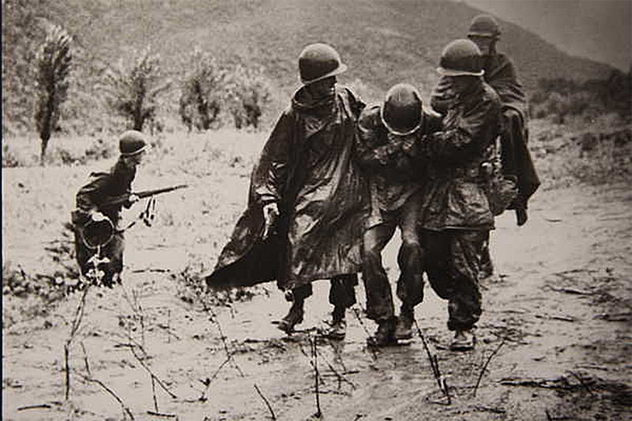 Catholic priest and posthumous Medal of Honor recipient Emil Kapaun may have well been following in the footsteps of his predecessor, Maximilian Kolbe. As a chaplain during the Korean War, Kapaun performed many selfless acts of heroism. He tended to the wounded, carried them off the battlefield, and gave last rites to the dying. However, it was during his capture in November 1950 by Chinese forces that Kapaun really shone. After seeing a Chinese soldier about to summarily execute a wounded GI named Herbert Miller, Kapaun calmly walked to the scene, brushed the soldier aside, and carried Miller away on his back. Miraculously, the perplexed Chinese soldier did not fire.

Inside the POW camp, Kapaun became the beacon of hope for the other prisoners. Aside from bathing and feeding the weak, he also frequently stole food and other necessities from the Chinese, risking his own life in the process. He resisted attempts at indoctrination, and even defied communist protocols by holding an ecumenical service right inside the camp. By then, his captors had grown wary of him, yet feared that eliminating him would start a riot. Sadly, conditions at the camp gradually took their toll on Kapaun’s health; he died four months after his incarceration and was later buried in an unmarked grave. However, before passing on, he gave his fellow prisoners the most invaluable gift of all: the will to live.

7The Cossacks’ Expletive-Filled Letter To The Ottoman Sultan 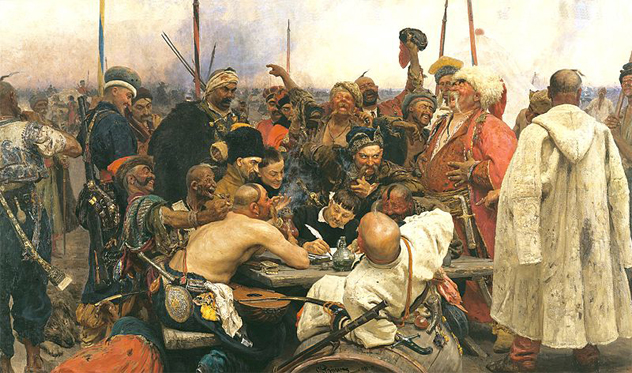 Generally speaking, it was probably not a very good idea to get on Sultan Mehmed IV’s bad side, considering that the Ottoman Empire was pretty much steamrolling over every scrap of opposition they came across at that point in time. However, the Zaporozhian Cossacks of Ukraine could not care less—they were Cossacks, after all. After an initial battle in 1675 that saw his forces defeated by the Cossacks, Mehmed IV sent them a threatening letter ordering them to surrender. Instead of following his demands, the Cossacks replied with one of the most offensive letters ever written. Aside from the numerous expletives, the letter also parodied the sultan’s letter line-for-line and ended with a zinger fit for Hollywood. This incident would later be immortalized in a painting by Russian artist Ilya Repin. Although no historian has ever recorded Mehmed IV’s reaction to the reply, we can safely assume it was not pretty at all.

6Jacques De Molay Recanted His Confession In Front Of The World 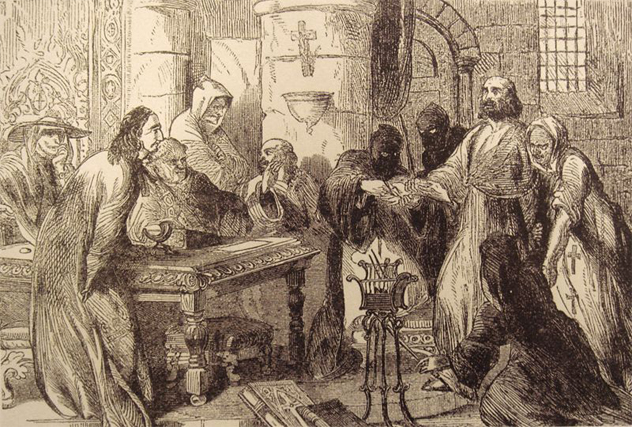 Philip The Fair may well be one history’s most underrated villains ever. Under the guise of purging heretics (and conveniently enriching himself in the process), Philip had the Knights Templars arrested in October 1307. With the official endorsement of Pope Clement V, Philip had the members tortured into admitting non-existent sins and the whereabouts of their vast riches.

Amid this tragedy was the Templar Grand Master Jacques De Molay. Old age and seven years of unspeakable torture had forced a confession out of him. In a bid to humiliate him further, a commission in 1314 decided to have him and three other Templar leaders repeat their confessions on a platform set up in front of the Notre Dame Cathedral in Paris. What followed would be one of the most famous recants in history: Instead of reading his script, De Molay proclaimed the Templars’ innocence and soundly condemned the French king and the pope for their treachery. One of his comrades, Geoffroi de Charney, also retracted his own confession. The incident infuriated Philip so much that he had both men burned the very same day. De Molay, however, may have had the last laugh: Before his death, he supposedly cursed the king and the pope to join him in the afterlife shortly—which they totally did.

5The Woman Who Brushed Off A Bayonet 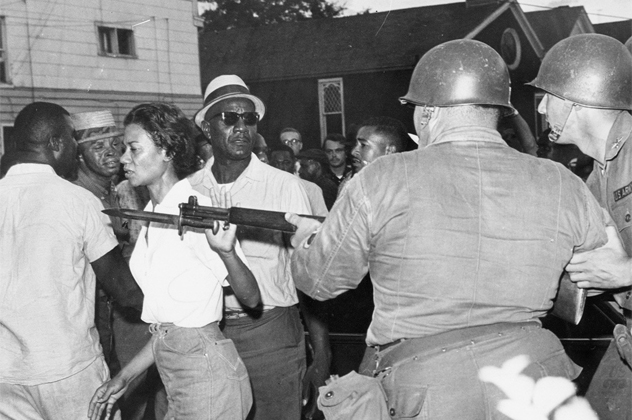 While we are more familiar with the famous incident that involved civil rights activist Rosa Parks refusing to budge from her seat in a segregated bus, it would be a shame if we did not mention Gloria Richardson’s similarly amazing act of defiance. As the leader of the civil rights movement in Cambridge, Maryland in the 1960s, Richardson worked tirelessly to end segregation and unequal government treatment of blacks. During this time, they also had to actively defend themselves from attacks by white supremacists and pro-segregationists.

In 1963, racial tensions culminated in a major riot, forcing the governor to declare martial law and send in the National Guard. This ugly episode would turn out to be Richardson’s finest moment: Instead of backing down from a Guardsman pointing a bayonet at her face, the single, middle-aged mother of two angrily brushed it aside and shouted invectives at the man. Although Richardson would later continue to join other protests, she never forgot that fateful incident in her later years, even remarking that she was crazy to have done that back then.

The Olympics are usually full of moments that will forever be seared into mankind’s collective memory; this is one such moment. Set during the 1980 Olympic Games in Moscow, this incident involved Polish Olympian pole vaulter Wladyslaw Kozakiewicz telling the mostly Soviet crowd off with his country’s version of the middle finger after he won the gold medal. Prior to that, the crowd had been rabidly jeering him in an effort to throw him off. His act of defiance later made him a celebrity in his native country—and across the world.

Naturally, this little incident didn’t sit well with the Soviets. Their envoy to Poland demanded that Olympic officials strip the Olympian of his gold medal. His request went unfulfilled when Polish officials came to Kozakiewicz’s defense and explained that the gesture had been the result of an “involuntary muscle spasm.”

3Napoleon Dared His Former Soldiers To Shoot Him 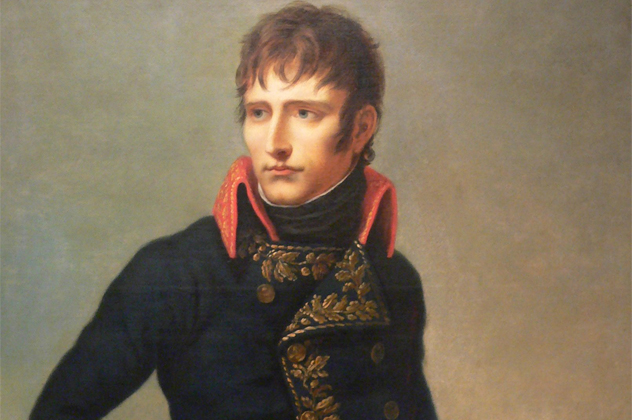 It was apparent that being governor of a tiny island did not appeal to Napoleon; after all, he once ruled almost all of continental Europe. In an attempt to regain his lost glory, Napoleon and some of his loyal soldiers engineered a daring escape from his island prison on Elba in February 1815. During his march to Paris, many of his former soldiers flocked to his side. In an extraordinary event that showcased Napoleon’s charisma, he single-handedly convinced an entire regiment to rejoin his cause. The 5th Regiment had been assigned to stop Napoleon’s march in Grenoble and were already preparing to fire upon his much smaller force. Instead of retreating, Napoleon calmly walked alone to the front of the lines, bared his chest, and announced:

“If there is anyone amongst you who would kill his Emperor, let him do it. Here I am.”

Upon hearing these words, the soldiers chanted “Long live the Emperor” and embraced Napoleon. Just a few days later, Napoleon had France under his rule once again, though it was a reign that would later prove to be short-lived.

2The Spartans’ One-Word Reply To Philip Of Macedon 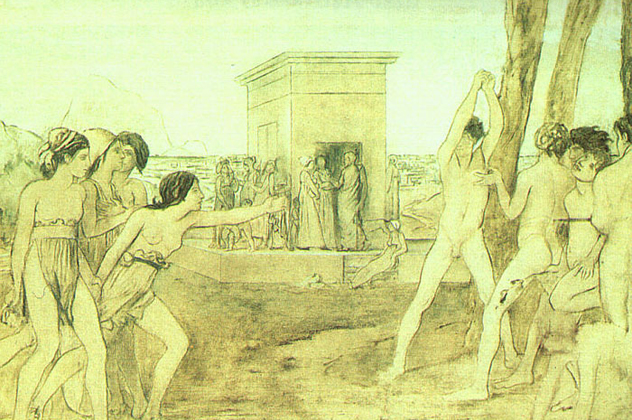 Other than their legendary fighting prowess, the Spartans also had a reputation for being people of few words. In one such incident which proved the power of their succinct replies, they had to face off against Alexander the Great’s megalomaniac father, Philip of Macedon. After the man had firm control over all of Greece save for Sparta, he sent a message to the inhabitants, warning them that a refusal to surrender would mean their utter destruction, “for if I bring my army on your land, I will destroy your farms, slay your people, and raze your city.”

The Spartans, in true laconic fashion, replied with just one word: “If.” We can assume that that was enough to make Philip back off. For the remainder of his reign, he never threatened Sparta again. Alexander did likewise; in fact, the Spartans never joined him in his conquest of Persia and his expedition to Asia.

1The Woman Who Infuriated The Ayatollah 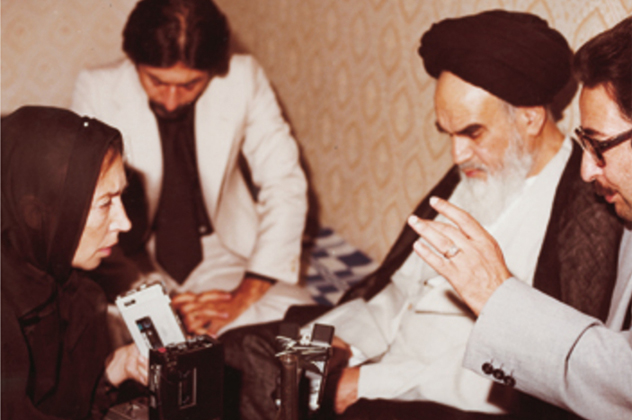 Few people in this world can claim to have both infuriated and amused the dreaded Iranian leader Ayatollah Ruhollah Khomeini. In fact, Oriana Fallaci may be the only one who can. In a no-holds-barred interview with the Ayatollah in October 1979, the Italian journalist and former World War II resistance fighter repeatedly irritated the cleric with her probing questions on his political and religious views. At one point, the topic turned to Muslim women’s clothing. After the Ayatollah chided her and said it was the proper dress for women, Fallaci ripped her chador off in front of the cleric. That incident shocked the Ayatollah enough to make him walk out of the interview.

Fallaci had to wait for a day for the cleric to return; during that time, his son Ahmed instructed her not to bring up the topic again—an order she ignored. When the Ayatollah did return, she immediately brought up the issue again. In what could only be described as a once-in-a-lifetime moment, the cleric subsequently smiled and laughed instead of blowing up. After the interview was done, Ahmed complimented Fallaci for being the only one in the world to make his father laugh.