Listverse has talked about terrifying paintings of antiquity, but this article shows that for art that sends a chill down your spine, the modern era can more than compete. It can make even Caravaggio or Edvard Munch look positively prissy by comparison, especially towards the end of this list, when we transition from two-dimensional images to sculpture.

We’ll start this list with Yugoslavian-born Dado (1933-2010), to ease you into things. At first glance, his work can often look banal or pleasant, because of his color choices. They are often pastels instead of the deep reds and blacks most “creepy” artists favor. It’s when you look closer at images like The Large Farm (1963; pictured) or The Footballer (1964) that you see how sickly and grotesque the creatures in them are. Their pained or leering expressions, their tumorous growths, and bodies that are hodgepodges of other forms, or simply wrong. In fact, the pastels only make images like The Large Farm worse, because of how rarely you see them in a horror setting.

Among Dado’s admirers is H.R. Giger, the infamous designer behind the blockbuster Alien franchise, Species, and Darkseed. He has works by the painter featured in his collection, which also includes prints by such luminaries as Salvador Dali. I think we can all agree that’s a pretty credible endorsement. 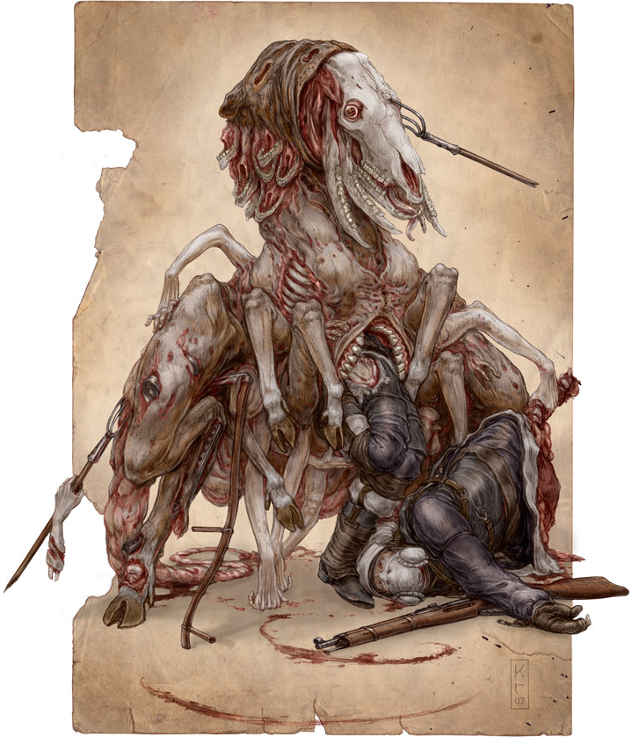 Keith Thompson is more a commercial artist than he is a fine artist. He does monster-design work for such projects as Guillermo Del Toro’s Pacific Rim and Scott Westerfield’s Leviathan series. His work has the polish and technique that you would expect from a Magic: The Gathering card, rather than something you’d expect to admire in a museum.

Look at the image above, Pripyat Beast, with its amalgamation of animals and terrible deformities, to get an idea of the kind of thing he’s happy drawing. Its backstory—that the monster and creatures like it are the result of radiation from the Chernobyl disaster—is so farfetched that it feels like a throwback to the 1950s, but that doesn’t change how discomfiting it is to look at. One of the more bizarre compliments paid to this piece was when the SCP Foundation (a creative writing community centered around supernatural creature sightings) took it for their mascot—calling it “SCP-682.” Considering the numerous other horrifying pieces Thompson has in his oeuvre (such as Lili), presumably they’ll find plenty of other inspiration in there as well. 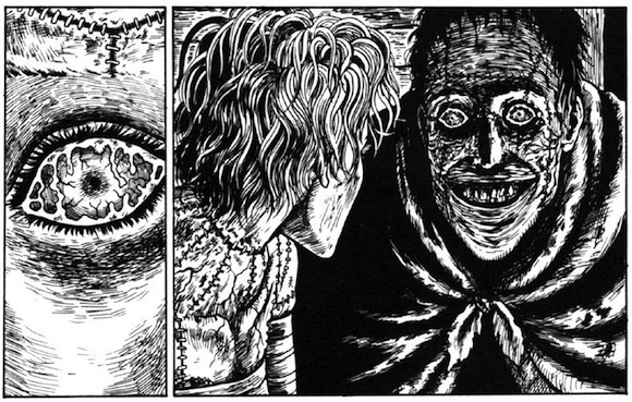 On the subject of commercial artists whose work is far more horrifying than would seem profitable, Junji Ito’s comic books are truly some of the most horrifying pieces ever inked. And it’s not just the grotesque detail he pours into every blemish and wrinkle of his abominations—the deeply irrational way he’ll have humans react manages to be frightening instead of a cause for rolled eyes. For example, in his comic The Enigma of the Amigara Fault, he has humans strip off their clothing and climb into human shaped holes in solid rock, which is oddly unsettling even before he makes the holes elongate and curve. Or his comic series Uzumaki (“spiral”), in which a man’s obsession with spirals starts as laughable, but quickly becomes unsettling, even before the obsession works its transformative magic and turns the man into something inhuman but alive.

Ito’s work is distinctive among Japanese horror comics in that he draws his “normal” characters with an unusually realistic and somewhat cute style. It really helps his monstrosities stand out in sharp relief. Ito’s desire to scare people is perhaps a natural progression from his former profession—dental technician. 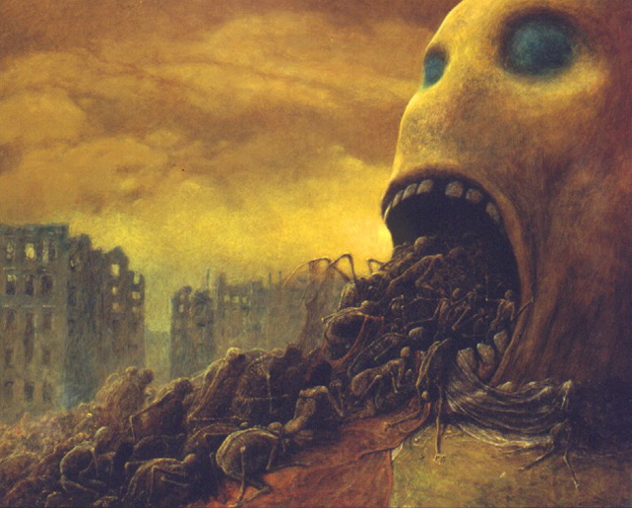 When an artist is quoted as saying “I cannot conceive of a sensible statement on painting,” most likely the artist is not painting kittens onto collectible plates. This Polish painter, born in 1929, spent decades creating nightmarish images of fantasy realism until his gruesome murder in 2005 (he was stabbed 17 times). His most prolific period, in which produced highly detailed images that he described as like taking a photograph of his dreams, was from the 1960s to the 1980s.

While Beksinski didn’t believe he was making any particular point, since, as he put it “meaning is meaningless to me,” some of his works certainly appear to be symbolizing something—for example, the 1985 painting shown above, Trollforgatok. He grew up in a country devastated by World War II and forcibly seized by the Soviet Union—it’s easy to imagine those creatures as, perhaps, the Polish citizenry, and the head as some sort of ruthless institution. But no, the artist claimed it was nothing like that. In fact, Beksinski even said his work was meant to be either optimistic or humorous, which would have to make it some of the blackest humor ever created. 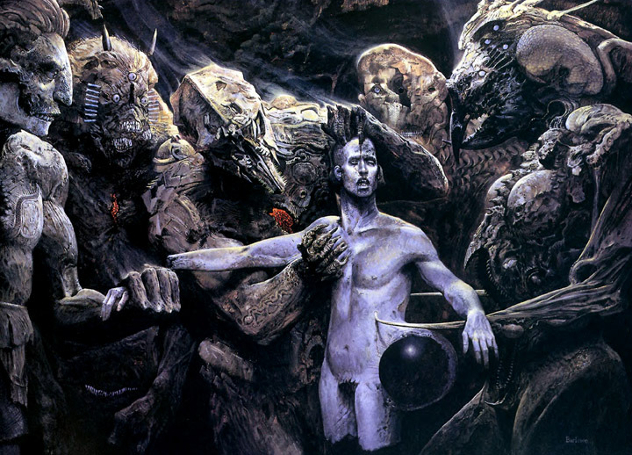 Thousands of artists have tried to portray Hell, but Wayne Barlowe is definitely among the more famous—even if you haven’t heard of him, you’ve probably seen his work. Barlowe’s art has been featured in an array of high-profile films, from James Cameron’s Avatar (where his work earned him personal praise from the director), to Pacific Rim, to Harry Potter and the Prisoner of Azkaban and Goblet of Fire. His magnum opus, however, is unquestionably the 1998 book Barlowe’s Inferno.

His portrayal of Hell is more high fantasy than simple torture chambers—a wasteland with grand demonic lords and armies. But you’ll never mistake it for Tolkien. His description reads, “Hell is characterized by its complete indifference to human suffering.” Take the above painting, The Examination, inspired by Flemish paintings of autopsies. His demons often show a curiosity about human souls, even as they completely disregard the pain they inflict in studying them. It’s somehow worse to know that we humans aren’t even important enough to be objects of hate and torture. We’re just idle curiosities to the demons—if that.

It’s no surprise Guillermo del Toro said of Barlowe’s Inferno: “The Devil has found an architect.” 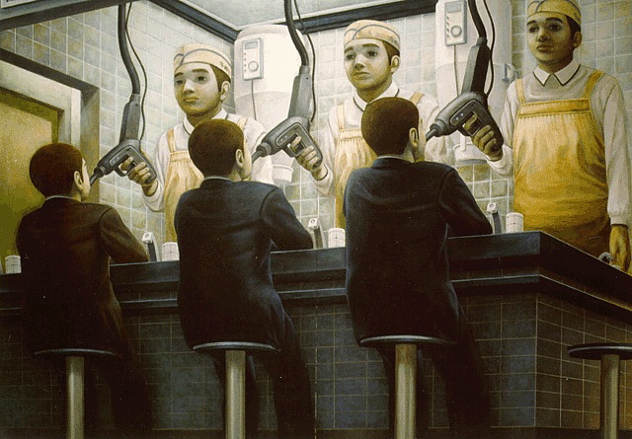 The social commentary in Ishida’s 180 works is not subtle. His acrylic paintings are often of people turned into objects, such as packaging, conveyor belts, urinals, and even a hemorrhoid pillow. There are also superficially pleasant paintings, depicting people’s rooms merging with nature, as if the people in them are escaping their dreary surroundings through the use of imagination. These, however, are much less vivid than the above painting, which turns food-service workers into mannequins that pump food into customers, like cars at a full-service gas station.

Whatever your opinion about the accuracy or insight of his metaphors, the style with which they are executed is so uncanny-valley that any humor is overwhelmed by feelings of disgust and fear. This career of bizarre work was brought to an end in 2005, when Ishida, 31, was hit by a train, almost certainly in an act of suicide. The body of work he left behind is so highly regarded that paintings such as this untitled work have sold for hundreds of thousands of dollars. 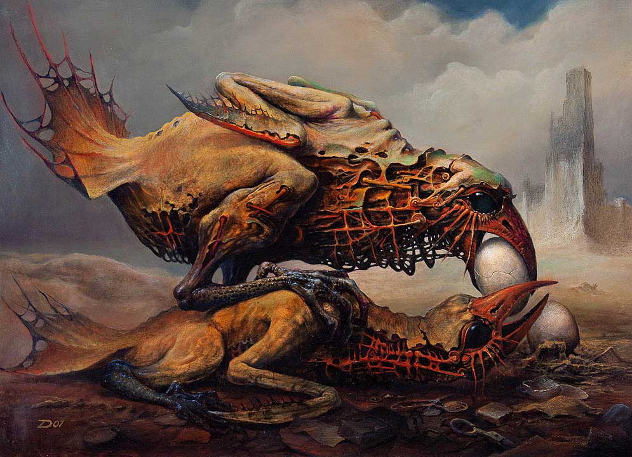 Born in 1958, Zawadzki continues in Bekinski’s tradition of frightening fantasy realism. It’s actually in the face of some discouragement that he entered the field at all. As hard as it might be to believe, given the rich texture and details of his work, he was told by a teacher early on that he did not have good enough vision to be a painter. Maybe the teacher just wished they could not see his horrifying images so clearly.

Zawadzki’s work has a certain steampunk element to it. He often paints robotic creatures with the working components visible beneath their artificial skin. If that doesn’t sound especially creepy to you, consider the 2007 oil painting The Nest (pictured). The body language of these chicks is convincingly similar to living animals, but they are in a bizarre, partially eviscerated condition. It’s sickening, but still intriguing enough to keep you from looking away. 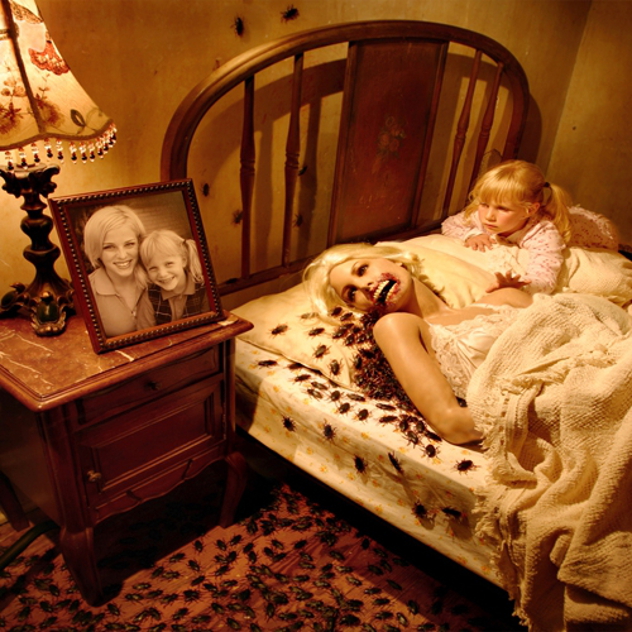 Born in 1973 in Emporia, Kansas, Hoffine is a photographer of horrific tableaus that combine traditional fairytales with childhood fears in a way which obliterates any trace of whimsy the stories possessed. (Childhood Fears is also the title of his most popular photo series.) His training in mainstream magazine photography and Hallmark-card design gives his work a slickness and professionalism a lot of horror photographers actively avoid, since they’re often going for a documentary or “found footage” look.

While some of his works look a little too staged and whimsical to be really scary—for example, his photo series Pickman’s Masterpiece, a homage to one of H.P. Lovecraft’s characters, a painter called Pickman—his best is truly disquieting. Take the 2008 piece Bedside, shown above, which, like many of his pieces, features his daughter Chloe. By directing her not to show much emotion, Hoffine avoids forcing a particular response on the viewer. Instead, the contrast between the pink pleasantness and the cockroaches draws out a natural reaction. It’s a balance Hoffine can often expertly strike. 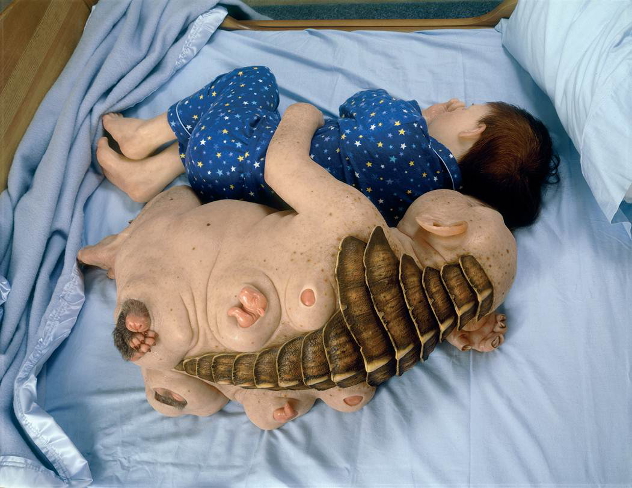 Piccinini’s sculptures deal with an extremely varied subject matter, including malformed motorcycles and bizarre hot-air balloons like the Skywhale. But this Sierra Leone native (now an Australian citizen) mostly creates sculptures that make you uncomfortable to look at photos of, let alone stand in the same room as. There are works like the 2004 piece Undivided (pictured), in which a humanoid with back plates and baby animals emerging from its back cuddles a human child. It’s all the more unsettling with its element of trust and affection, as if a child’s innocence is being cruelly used against it.

Perhaps the highest-profile credit Piccinini’s work ever received (if a less than auspicious one) was when, as Snopes.com reported, photos of her piece The Young Family were distributed online via chain email. Various lies were attached to the sculpture—for example, that it was a “malcat,” supposedly a dog-human hybrid being illegally imported into the USA. While people who forward chain emails aren’t known for their hard-nosed critical reasoning, it’s still a tribute to Piccinini’s skill at manipulating fiberglass, silicone, and hair. 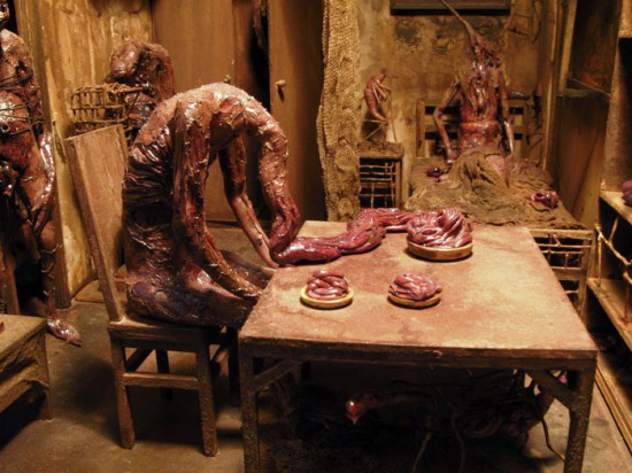 Australia seems to offer Poland legitimate competition in terms of inspiring horror artists, as Powell’s Melbourne pieces are some truly disturbing work. His 2012 show of “miniature environments where imaginary beings evolve, devolve, consume, excrete, multiply and decay” is shocking even in this fairly jaded day and age. His earthtone environments and textured creatures are appallingly convincing, and the body language of the figures is precisely designed to make the situations look more normal for them, and thus more believable for us.

Like our earlier artists, the internet has not hesitated to steal images of Powell’s art and invent other contexts for them. The aforementioned SCP Foundation took the disgusting (but oddly homey) image above and made it part of a story called “The Flesh that Hates.” The popular short horror story “The Russian Sleep Experiment” also had that image attached to it, by creators of horror videos like this one. It’s no surprise that Powell’s dioramas made such an impression. While the other artists featured here made stomach-turning statues and demonic beings you can look at, Powell exhibited visions of hell could be walked through.