We’ve put men on the moon and car-sized robots on Mars. We’ve also discovered nearly 1,800 planets around other stars. It would be easy to think that we’ve got a pretty good handle on what’s out there. Then you find out that there’s a bizarre giant hexagon on Saturn, and you realize that we don’t understand half of what’s going on with our closest neighbors. These mysteries make it clear we’re going to need a lot more robots. 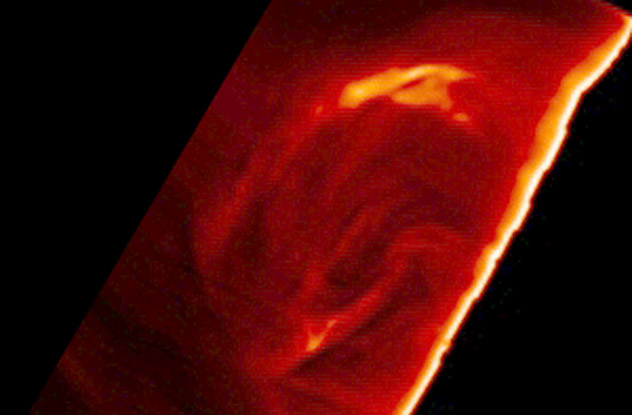 A giant vortex near the Venus’s south pole behaves like a storm but without rain or lightning. It’s about 1,800 kilometers (1,200 mi) across, 18 kilometers (12 mi) tall, and takes place 41 kilometers (26 mi) above the planet’s surface. We used to think it was an oval, but in 2011, scientists discovered it regularly changes shape. Sometimes it looks like an “S” or an “8,” but often, it’s just an irregular blob. It’s about three degrees off from the south pole, which it orbits every 5 to 10 days.

In 2013, we discovered it isn’t a single vortex at all. It’s actually two vortices, with two centers of rotation at different altitudes. They break up and merge but rarely line up. Scientists studying the pair would have expected them to move as one feature and are unsure why they don’t. This may have something to do with how Venus’s atmosphere rotates 60 times faster than the planet itself, but scientists haven’t figured out the connection yet. 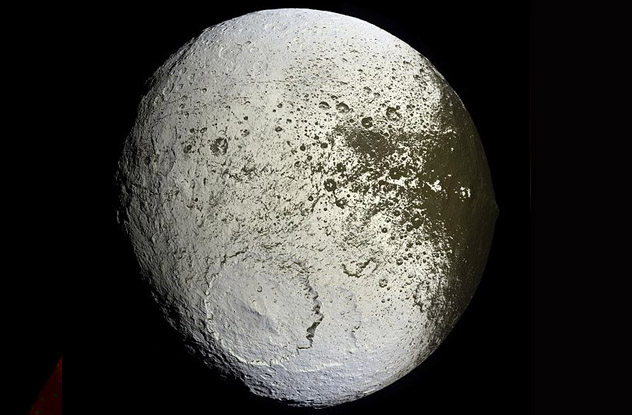 Iapetus, Saturn’s third-largest moon, has been a source of mystery ever since Giovanni Cassini discovered it in 1671. The Italian astronomer noticed that the moon’s forward face, which leads the orbit, is darker than the trailing hemisphere. In fact, the back is 10 times brighter.

This oddity remained unexplained for 336 years, until we sent a probe past Saturn—a probe fittingly named after Cassini. Scientists discovered that the moon originally swept up dust as it moved. This darkened the front, which then absorbed more sunlight, causing ice there to melt. This darkened it further, absorbing still more sunlight, and so the spiral continued.

The Cassini probe may have solved that mystery but not before discovering a new one. An 18-kilometer-tall (12 mi) ridge runs around most of the moon’s equator—that’s over twice the height of Everest on a moon one-ninth Earth’s diameter. One theory says Iapetus had a ring which fell to the surface, forming the ridge. Another suggests that a 1,000-kilometer-wide (650 mi) asteroid crashed into Iapetus and suddenly slowed the moon’s spin. The resulting stress flattened the moon at the poles, creating a central bulge.

Not content with simply providing its own mysteries, Iapetus may also help solve those on other planets. A sturzstrom is a type of landslide found on Earth and Mars that travels about 15 times further than most, and we have no idea why. One theory suggests that sound waves make rock particles act like a fluid. These landslides appear to be extremely common on Iapetus, so the more we learn about its surface, the closer we may be to figuring out what causes sturzstroms.

8The Spider On Mercury 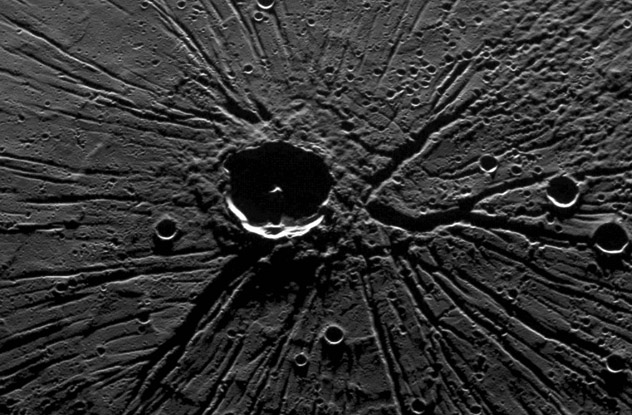 When NASA’s MESSENGER probe made a pass on Mercury in January 2011, it photographed an impact crater different from any other we’ve found in the solar system. It’s been nicknamed “the spider” as around 50 troughs branch out from the basin in all directions. A scientist from the laboratory that helped build the probe called it “a real mystery” and suggested volcanic activity may be behind it. The structure has since received the official name “Pantheon Fossae,” named after the Pantheon domed temple in Rome, with Fossae being the Latin word for “trenches.” The central crater has been called Apollodorus, after the Pantheon’s chief architect.

High-resolution images suggest that the 41-kilometer-wide (27 mi) crater may have nothing to do with the trenches at all, as it’s slightly off-center. A meteor may have struck close to the bull’s-eye after the pattern had already formed.

7Miranda Is A Mess 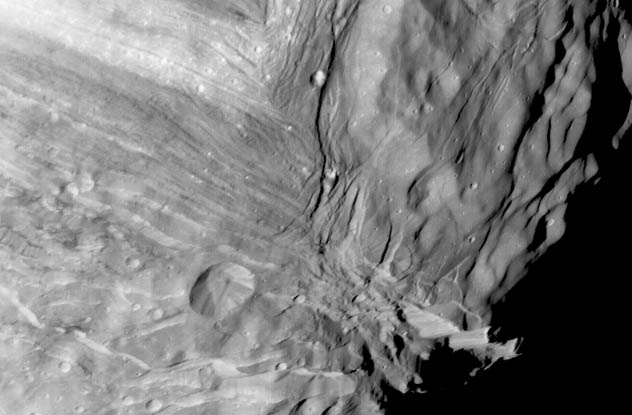 Miranda is Uranus’s fifth-largest satellite and the most oddly deformed moon in the solar system. Even NASA describes it as “like Frankenstein’s monster” because it looks like its parts don’t fit together. Its unusual patchiness is extremely clear from pictures taken by Voyager 2. These patches are caused by sharp boundaries separating lightly cratered areas from areas that have been heavily bombarded. The deepest ridges between these areas are 12 times deeper than the Grand Canyon.

This appearance is unique in the solar system, and scientists don’t know what caused it. One theory is that the moon was hit hard enough to break apart before gravity pulled it haphazardly back together. Another scenario is that the smoother areas, called coronae, were hit with meteorites that melted ice and caused slush to travel across the surface and refreeze.

6The Mysterious Spots On Uranus 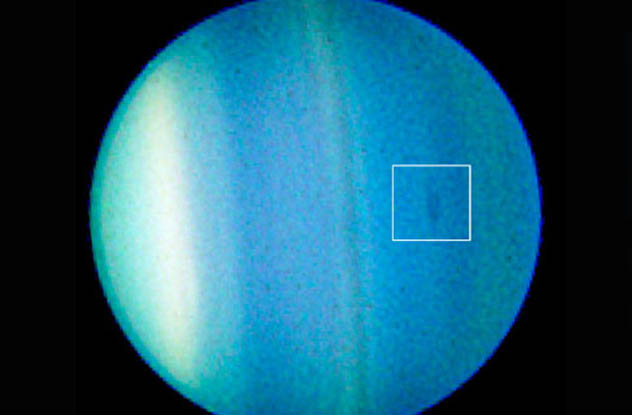 The Hubble and Keck telescopes discovered a dark spot on Uranus in 2006. Similar spots had been seen on Neptune before, likely caused by eddies in the atmosphere. Scientists are unsure, however, what causes the darkness. It could be a break in clouds allowing us to see deeper into the planet. Alternatively, something dark may have risen upward or have coalesced from higher points.

In 2011, astronomers spotted the opposite—a large white spot 10 times brighter than the rest of the planet. It appeared to be hundreds of miles wide and may have been a giant methane storm. Hubble was hurriedly turned to investigate, and it discovered that the bright spot was paired with a dark one right beside it.

We unfortunately still can’t explain the darkness we’re seeing. We will probably have to send a probe to Uranus to answer that question. 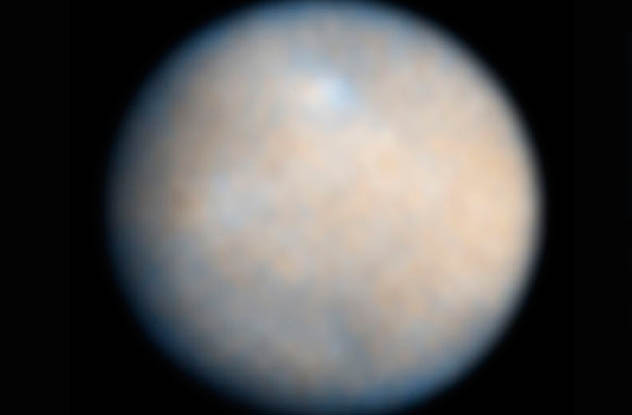 Ceres is both the largest asteroid and largest dwarf planet in our solar system. When we last talked about it, we mentioned it might contain more water than all the fresh water on Earth. Since then, scientists have discovered it’s shooting some of that water into space. Plumes of vapor were detected by the European Space Agency’s Herschel space telescope. The unanswered question is what’s causing them.

There are two main theories. Since the vapor comes from darker regions of the planet, those areas could be absorbing sunlight. When light heats ice under low pressure, water skips right past the liquid stage and forms gas. Alternatively, volcanic activity could be going on beneath the dwarf planet’s surface.

We may have an answer in 2015, as NASA has a probe named Dawn currently on the way. 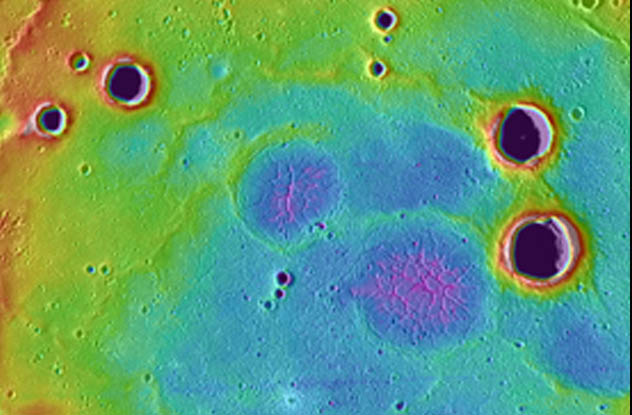 While the spider is the most visually striking mystery uncovered on Mercury by the MESSENGER probe, it’s far from the only one. In fact, many of our ideas about how Mercury first formed have been replaced with questions.

Something inside the planet has caused previously sloped surfaces to level, while previously level areas have become slopes. The floor of the planet’s largest crater has risen higher than its rim in some places. Scientists don’t know why and don’t know if more changes are on the way. Mercury’s mantle is thought to be too thin for the processes that cause topographic changes on other planets. Figuring out what’s happening there could alter our understanding of all rocky planets.

Mercury is oddly put together. Its solid core is more than half its width, five times the proportion on Earth. The Sun may have blown off the planet’s outer layers, or a massive collision could have done the job. However, volatile elements that should’ve disappeared during either of those events exist in the same proportions as they do on Earth and Venus, casting extreme doubt on both theories.

3The Ashen Light Of Venus 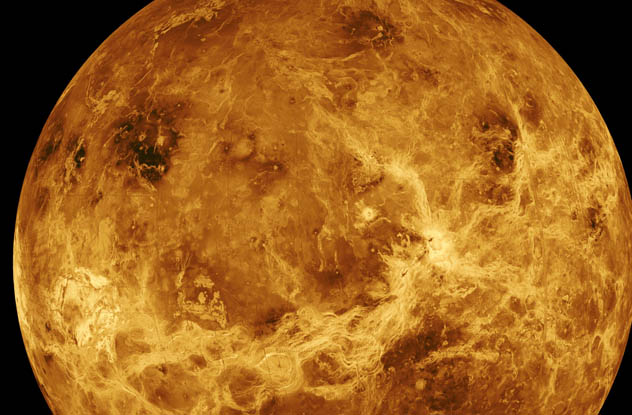 This elusive glow on the dusk side of Earth’s neighbor was first spotted in 1643 and has been observed by some of the biggest names in astronomy. It was seen at least 129 times from 1954 to 1962. Yet despite so many sightings, some believe Ashen Light is an artifact of observation. Others insist it’s a real phenomenon.

When astronomer Franz von Paula Gruithuisen observed it in the 19th century, he suggested it was due to Venusians burning the forest to make way for farmland or to celebrate their new planetary emperor. Modern theories are less adorable. One says sunlight splits apart carbon monoxide on the day side of the planet, and the gas recombines on the night side after being carried by fast winds. Other theories include powerful lightning storms or some sort of aurorae. 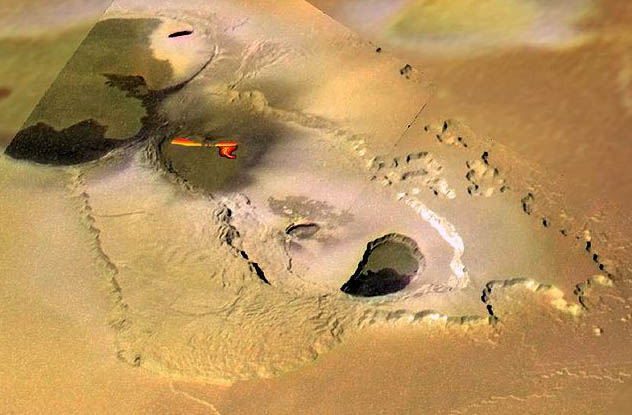 Jupiter’s gravity pulls the moon Io one way, while its larger moons tug it in different directions. The tidal forces stretch and heat up Io, producing awesome volcanoes. Io is the most volcanically active body in the solar system, and some of its volcanoes shoot lava 375 kilometers (250 mi) above its surface. But these volcanoes appear in places that fit none of our current models for how tidal heating works.

The volcanoes were expected to appear above the soft rock most prone to being deformed and heated. Instead, they were 30 to 60 degrees east of the expected location. Our models may be wrong, or something else may be going on. Io may be rotating faster than astronomers thought, or part of its internal structure may conduct magma across long distances. 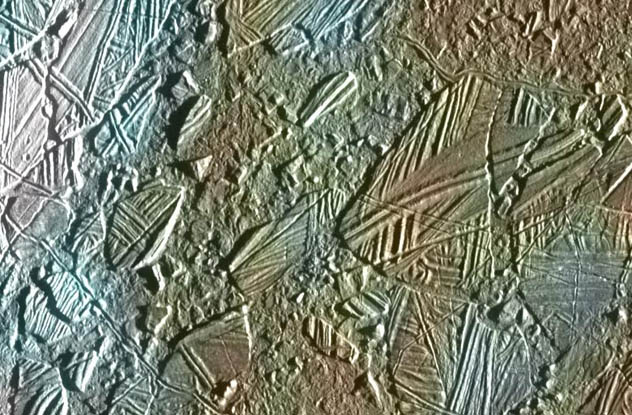 Some landscapes in the solar system are more than a bit disorganized. Mars’s Aureum Chaos region has erratic crisscrossing ridges and valleys dotted with randomly placed mesas and hills. Iani Chaos is another region on Mars named for its chaotic mishmash of ridges. There are even examples without “Chaos” in their name.

Scientists simply don’t know how or why these regions formed. Perhaps the area beneath Mars’s chaos terrain was a body of water or magma, which flowed away and caused the surface to collapse and break apart. Yet not all areas of chaos terrain seem good candidates for that explanation, and there’s debate over whether surface wind or water could have contributed.

An area of chaotic terrain on Mercury has a very different likely explanation. The Caloris Basin is the largest impact crater on the planet, at around 1,500 kilometers (930 mi) wide. The impact that caused the crater sent seismic waves through Mercury, and a forcefully jumbled landscape covers the exact opposite side of the planet.

Craggy, disrupted areas also cover Jupiter’s moon Europa. Conamara Chaos is one strikingly pretty region named for its chaotic nature. Europa’s chaos terrains are likely caused by warm water currents melting the crust and forming huge subsurface lakes. The ice on top splinters, and sections float around and rotate. When they refreeze, they leave a chaotic landscape behind.

+Lines All Over Europa 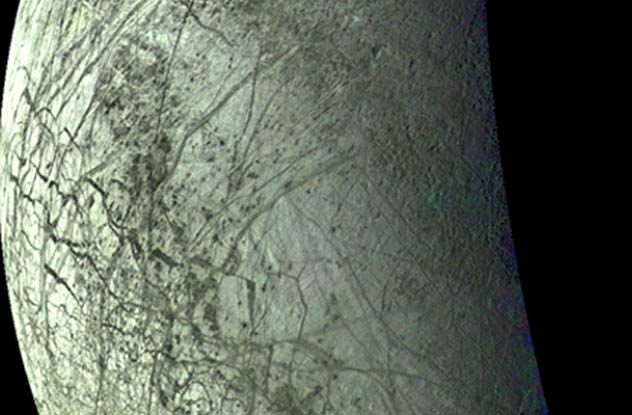 Europa’s surface is bizarre, even beyond the chaos terrain. In 1999, scientists figured out why the moon’s surface was covered in cycloidal ridges, which are arcs spanning hundreds of miles across the surface. These are caused by the tides of the undersurface ocean pushing against the ice. The focus of pressure moves in an arc as Europa orbits Jupiter, and it takes one orbit to form each arc.

Those same tides also cause lineaments, which are long, straight lines. However, these lines crisscross Europa in various directions. This is puzzling, as the same side of the moon always faces Jupiter. One theory says the icy shell rotates faster than the orbit, though more recent evidence suggests a tilt in the moon’s axis of rotation may be to blame. A combination of the two is also plausible.

Researching this list confirmed to Alan that astronomy terms are ideal as band names and titles for young adult novels. You should look forward to reading dystopian sci-fi thriller Aureum Chaos while listening to the song “Messy Miranda” by The Out-Of-Place Volcanoes.