In recent years, the myth that we can clearly see the Great Wall of China from space has been largely busted. Although the wall is long, it’s not very wide and blends in too well with the surrounding environment. While that realization might be somewhat disappointing, there are still plenty of earthly things we can see from space, especially when in low Earth orbit—where satellites and the International Space Station (ISS) hang out. 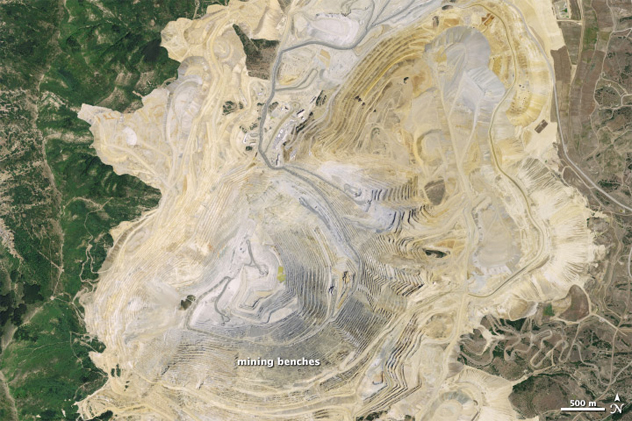 Open-pit mines are essentially massive quarries where gold, copper, uranium, and other resources are extracted from the ground. The process requires digging a hole into the ground to access the resources, and this hole continues to deepen and widen so long as the miners are unearthing things of value and making money. Consequently, these pits often expand to gigantic proportions that are as noticeable from space as any lake or mountain.

For example, the now-closed Mir diamond mine in Russia is so colossal that officials had to enforce a no-fly zone over the pit. Apparently, the 523-meter-deep (1,700 ft) and 1,200-meter-wide (3,900 ft) pit created such a downdraft that it caused helicopters to fall out of the sky. And that’s not even the biggest mine in the world—that title goes to the Bingham Canyon mine, also known as the Kennecott copper mine, located outside Salt Lake City, Utah. The mine is an astounding 1.2 kilometers (0.7 mi) deep and 4.4 kilometers (2.7 mi) wide. Two Empire State buildings could fit stacked on top of each other and still not reach the top, and the mine is expected to continue expanding until 2030. NASA astronauts snapped the above photo of the enormous Bingham Canyon mine while passing over it on the ISS. 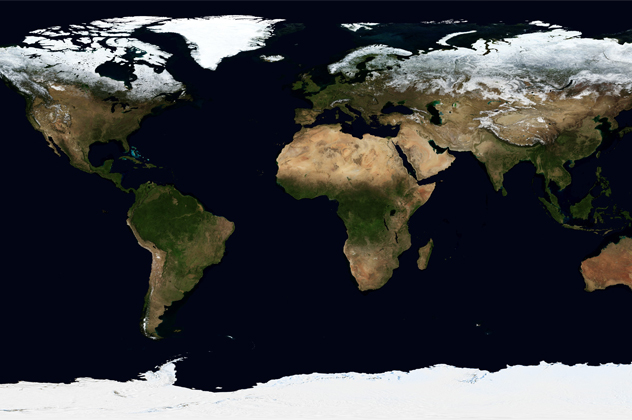 Those who stay in orbit long enough can actually track the seasons based on the planet’s changing topography. However, even us land-dwellers can see this fascinating transformation, thanks to satellite imagery from NASA. When monthly images of the planet are combined in an animation, they reveal the ebb and flow of polar ice, the dry and wet seasons in the tropics, as well as the growth and death cycles of vegetation throughout the world.

Perhaps most interesting is seeing how much Arctic ice forms and then recedes each year. To put it into numbers, Arctic sea ice spans an average of 15 million square kilometers (5.8 million sq mi) in the coldest months of the year and then shrinks to about half that in the summer. In comparison, the Antarctic loses almost all its sea ice, going from 18 million to 3 million square kilometers (6.9 million to 1.2 million sq mi). 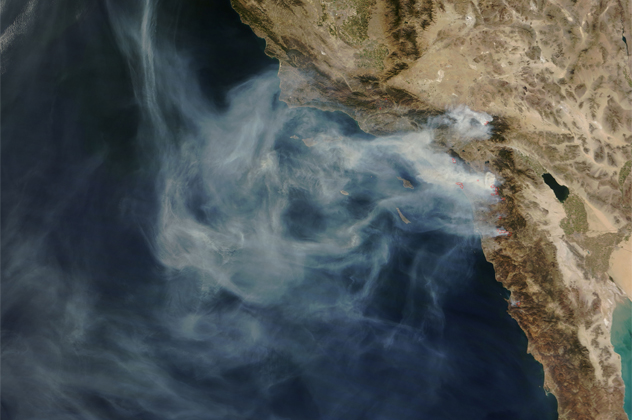 For those who live in dry, hot conditions, the regular potential for wildfires is simply a fact of life. The smoke and ash from these infernos can dim skies for hundreds of miles and produce so much smoke that even an astronaut could tell if something was ablaze. Shown above is a satellite picture of the October 2003 Cedar Wildfire in California, which extended from just above Santa Barbara all the way down to the Mexican border. Because of strong Santa Ana winds, this fire, along with several others that month, burned over 600,000 acres across the state and resulted in multiple deaths.

Still, it doesn’t take a fire of that magnitude for it to be visible from space. NASA has a whole collection of smoke images originating from fires both big and small. One of the most interesting is a photo showing hundreds of fires burning over Africa at one time. Although widespread, the smoke wasn’t coming from wildfires but from multiple farmers burning their land for agricultural purposes. 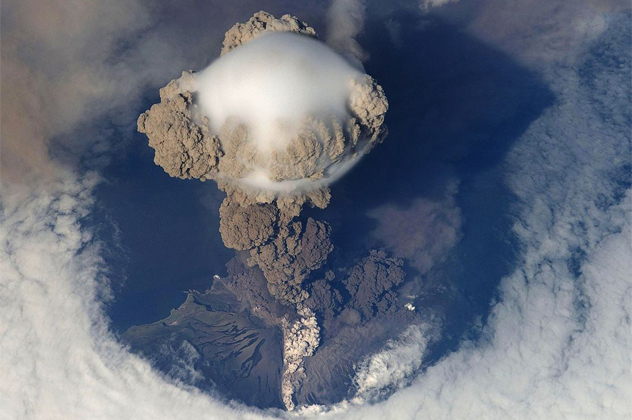 Although we’d expect to see massive volcanic eruptions from space, it’s somewhat surprising to find out that around 50 to 60 eruptions happen on the planet each year and, on any given day, orbiting astronauts can look down on Earth and see a plume of ash and steam rising from one of these natural chimneys. Occasionally, even a volcano’s hot, glowing magma is visible from heights far above the stratosphere.

The Sarychev volcano (seen above) in the northwest Pacific Ocean is one of the most active volcanoes in the world and has erupted eight times since 1946. In the 2009 eruption, shock waves opened a hole in the clouds above the blast, allowing astronauts to get an amazingly clear photo of the phenomenon. Some of the other most active volcanoes on the planet are Mount Stromboli in Italy, Mount Etna in Italy, and Mount Yasur in Vanuatu, all three of which have been continuously erupting for hundreds, even thousands of years. 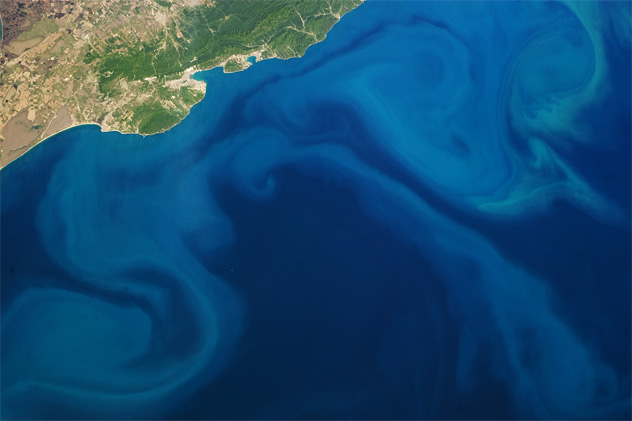 Phytoplankton are microscopic, plant-like organisms that can multiply quickly and create enormous algal blooms on the surface of the ocean. They accumulate into such dense and large populations that sometimes the only way to see the entire mass of these miniscule creatures is from space. Blooms can span hundreds of kilometers or more, and, as they follow the oceans’ currents, they make unexpectedly beautiful swirls and patterns of blue and green.

The blooms form when ocean waters mix and the phytoplankton get high amounts of sunlight and nutrients. They then serve as food for a variety of marine animals and are fundamental to the flow of the ocean food chain. They are also huge carbon dioxide absorbers, offsetting about one-third of the CO2 humans produce each year through the burning of fossil fuels. The bloom above happened off the coast of Ireland in 2010 and was photographed by NASA’s Terra satellite. It’s thought that an eruption by Iceland’s Eyjafjallajokull volcano provided iron and other nutrients to the phytoplankton, which allowed it to grow to such a spectacular size.

5The Border Between India And Pakistan 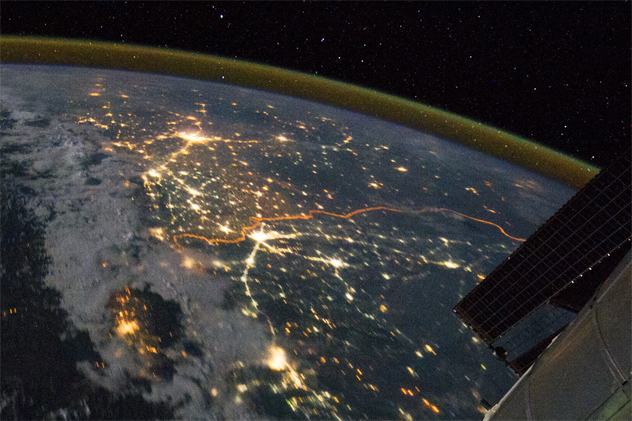 There’s no better vantage point than space to see the expansive beauty of the planet and the interconnectedness of the human race. However, even getting hundreds of kilometers above Earth isn’t far enough away to blur some of the ugly sides of life and the divisions we create between each other.

Take, for instance, the man-made border between India and Pakistan. These two countries are at such odds that they’ve erected a physical, militarized border which remains lit by floodlights at night to prevent ammunition trafficking and terrorist crossings. There’s such a bright, orange glow along the border that the 2,900-kilometer (1,800 mi) demarcation line is easily pinpointed from the ISS. The border covers a variety of terrain, including cities and deserts, yet is amazingly lit the entire length.

Over the past decades, the India-Pakistan border has been one of the most dangerous places in the world, plagued by lawlessness, violence, and deadly drone strikes. 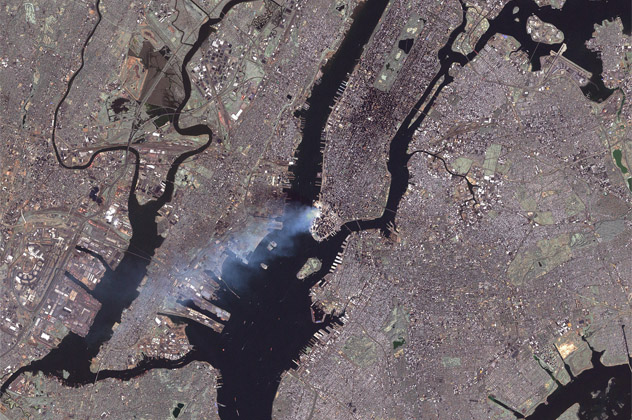 NASA astronaut Frank Culbertson was the only American not on the planet during the September 11 terrorist attacks. Even so, that didn’t stop him from witnessing what most of us only saw on the news: the aftermath of the World Trade Center destruction.

While orbiting 330 kilometers (205 mi) above Earth on the ISS, Culbertson heard about the event just as the ISS was about to pass over New England. He rushed to look out a window and, sure enough, saw an enormous plume of smoke rising from New York. Although horrified, the astronaut shot a photo of the scene, which is now one of the most famous images recorded that day.

Later, scientists used satellite data to determine that the plume from the World Trade Center traveled up to 1.5 kilometers (0.9 mi) in the air and drifted about 70 kilometers (43 mi). This plume was full of cement, gypsum, asbestos, glass fibers, calcium carbonate, lead, and other metal particles. In other words, it was a toxic dust that, when breathed in, was the equivalent of inhaling Drano. 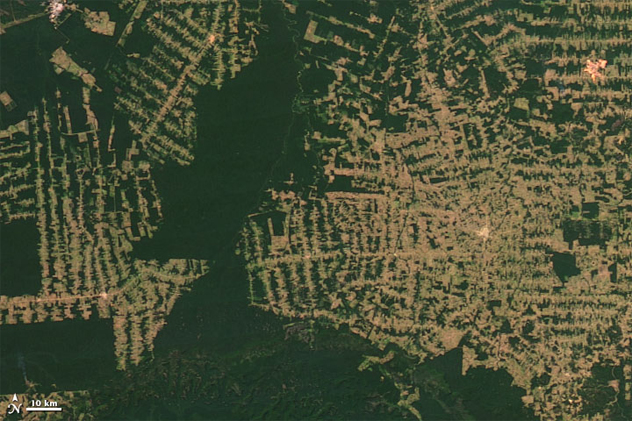 The benefit of looking down on the Earth from above is that it’s sometimes easier to get a real perspective of what’s happening with the planet. One such example of this is with deforestation. If we could stay up there for 30 or 40 years, we could personally see what satellites have been carefully documenting over the years: a consistent and significant loss of trees in some of our forests.

The image above, taken by NASA’s Landsat 1 satellite, comes at the end of a long string of photos that reveal the striking change in appearance that occurred in a portion of the Amazon rain forest between 2000 and 2012. What was once a dense, lush area has lost over 2,500 square kilometers (965 sq mi) of forest over those 37 years and now looks noticeably sparse with mere patches of trees. Overall, the Amazon as a whole has lost more than 360,000 square kilometers (139,000 sq mi) since the 1980s due to clear-cutting for roads, timber, agriculture, and other resources. 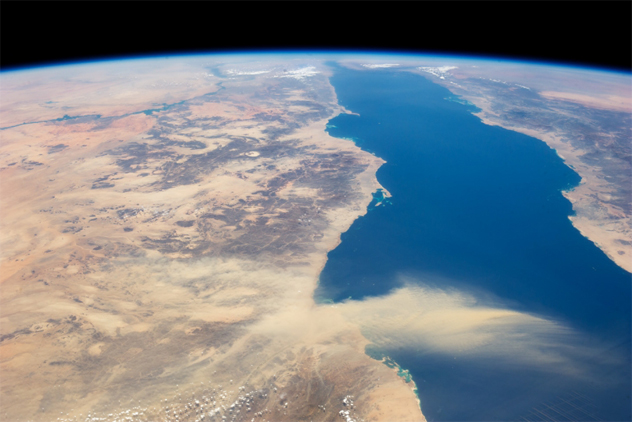 There are three major ingredients needed to form a dust storm: wind, sand or dust, and dryness. When all these elements combine during “ideal” conditions, huge tempests of blowing dust rise up and sandblast anyone or anything in their path at speeds of up to 160 kilometers per hour (100 mph). These storms can get so large that they are even noticeable from the ISS. For instance, an astronaut shot the picture above, which shows a massive dust plume coming off Egypt and stretching nearly the entire distance across the Red Sea.

Similar dust storms happen regularly off the coasts of Africa, China, and other places where trade winds can carry the debris thousands of miles. It’s not uncommon for airborne Saharan dust to create dirty, hazy skies all the way over in the northern Caribbean, creating a scene that doesn’t look too pleasant in the day but makes for gorgeous, tangerine-tinted sunsets. And while dust storms can wreak havoc on buildings, people, and animals, they are great at delivering minerals and nutrients to vegetation in places like the Amazon.

1The Borders Between Wealthy And Poorer Nations 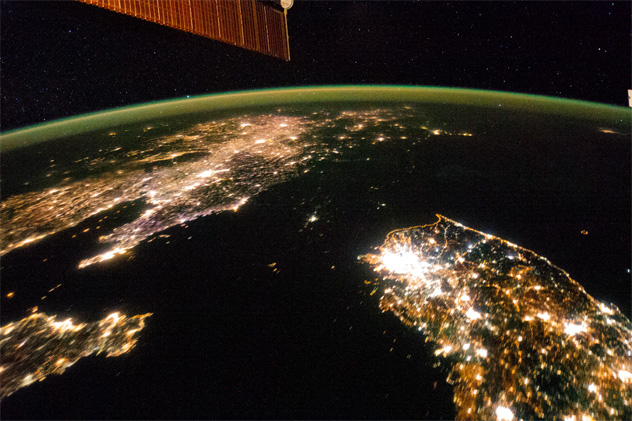 Modern civilizations have made such an impact on the globe that our political borders are visibly discernible from hundreds of miles in the air. NASA astronaut John Grunsfeld has flown on a space shuttle five times during his career. He explained that wealthy countries are typically lined in green, while poorer countries with less access to water are a shocking brown color. Also, nations that don’t have as much widespread electricity look dim at night and stand in stark contrast to neighboring nations whose bright cities light up the sky.

This is especially evident between the borders of North and South Korea. At night, South Korea is lit up like any modern area while North Korea is so dark it virtually disappears. In the picture above, we see South Korea illuminated vibrantly in the bottom right corner (Seoul is the brightest spot) while China is equally dazzling on the other side of the photo. But where’s North Korea? No, it didn’t sink into the ocean; it’s actually the black mass between the lights of South Korea and China. (Also note the curvy, orange border of the DMZ.) The only visible illumination in that area is the capital city, Pyongyang. While North Korea certainly isn’t guilty of light pollution, this image reveals how much of the country is likely living without basic electricity and all that comes with it: heat in the winter, refrigeration, and adequate hospitals.