Dante Alighieri’s Divine Comedy is one of the world’s most epic works of literature. The imagining of all the punishments that await the world’s sinners is filled with terrifying imagery that we can still relate to today. Guided by the ancient Roman writer Virgil, Dante heads down through the Nine Circles of Hell and speaks to a number of people along the way. Some of those people were very real and were condemned to Hell as a social commentary, for religious reasons, and in some cases, because Dante didn’t like them. 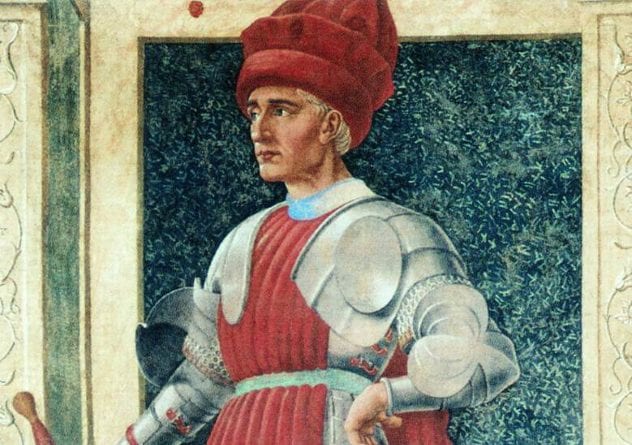 Dante and Virgil meet Farinata degli Uberti in the Sixth Circle of Hell, a place reserved for heretics. The bleak landscape is filled with cemeteries, and the dead are buried there again in tombs and sarcophagi to indicate that they are dead even to the afterlife. Dante carries on a relatively long conversation with Farinata in a scene that likely had more drama for contemporary readers than modern ones.

Outside of Dante’s narrative, the real Farinata led one of two opposing factions struggling for power. When Farinata’s Ghibellines were in power, he stopped the potential destruction of Florence. The tide turned with the Battle of Montaperti in 1260, which saw Florence burned to the ground and the Uberti family exiled. Their property was completely destroyed, and Farinata—along with his wife—was put on trial for heresy. Found guilty, he was exhumed and his remains were scattered on unconsecrated ground. 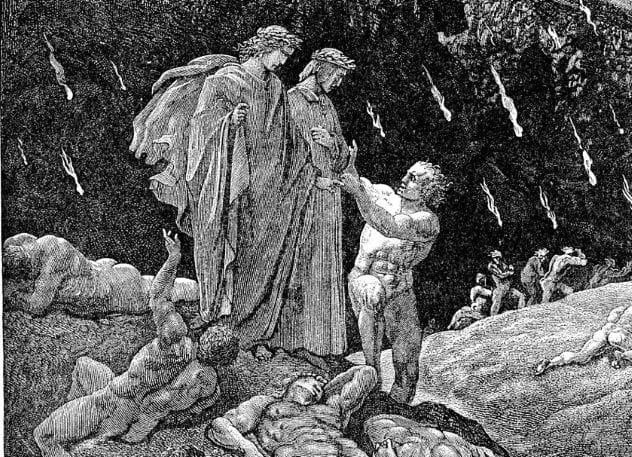 Brunetto Latini has been condemned to the Seventh Circle of Hell. In spite of the fact that there are no records or accusations to suggest he should be there, Dante condemns Latini to languish away with the sodomites.

Latini is treated with the utmost respect by the fictional Dante, and for good reason: He was Dante’s teacher. For decades after Latini’s death, scholars wrote of his virtuous nature, his worldliness, and his excellent teaching ability. There are no known scandals attributed to Latini, making him the strangest figure in Dante’s Hell.

Even the character of Dante is shocked to see him there, this teacher and public figure who was credited with refining the attitudes of Florence. It has been suggested that his version of sodomy might have been deviant teaching methods rather than what was seen as sexual deviance, but no one is entirely sure. 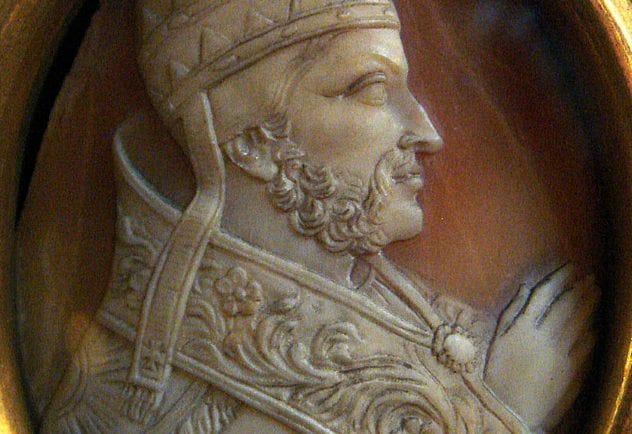 Dante condemned Pope Nicholas III to the Eighth Circle of Hell, reserved for fraudsters and, in this particular area, church officials who used their power for personal gain. Nicholas’s sins were so great that he has been suspended upside down in a hole, and when Dante approaches, Nicholas believes that the next pope in line for Hell has finally come to take his place.

Pope for only three years, Nicholas III was accused of using his position to create his own family kingdom. He passed sweeping laws that gave his family the utmost power in the eyes of the Church, elevated two family members to the position of cardinal, created positions for a few nephews, and saw his brother into the position of senator. Nicholas’s maneuverings would allow the Orsini family to remain of the most powerful families in Rome for centuries. 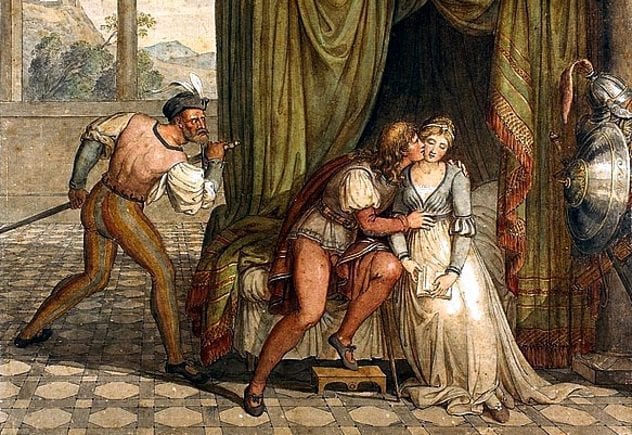 The Second Circle of Hell is reserved for the lustful, and there, the narrator finds a woman named Francesca da Rimini. When he talks to her, she says that she was condemned for falling in love with her brother-in-law.

When Dante was living in exile, he spent some time with Guido Novello da Polenta, who happened to be Francesca’s nephew. Her story was first recorded by Dante, and later writers filled in the blanks.

Born in the mid-13th century, Francesca’s marriage to Gianciotto “Crippled John” Malatesta united two noble families in Ravenna. Francesca fell in love with her husband’s brother, Paolo, and the two began a torrid affair. Gianciotto found out about it, and according to 14th-century writer Jacopo della Lana, Gianciotto confronted and killed them, skewering them on a sword so they would die together.

Gianciotto is also condemned to Hell, in a lower circle reserved for those who kill a family member. 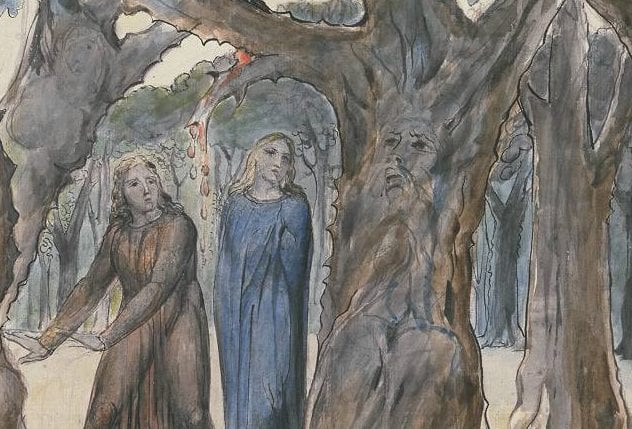 A section of the Seventh Circle of Hell is reserved for those who commit suicide. Souls are turned into misshapen trees, deemed unworthy of keeping their human bodies or speech until someone or something destroys a piece of them. Dante breaks a branch off one tree at Virgil’s urging and finds that it was once Pietro della Vigna.

Born in Sicily in 1190, Pietro rose from poverty to a position as chief minister for the Holy Roman emperor Frederick II. A poet as well as an ambassador and adviser, his fall came in 1249, when accusations that he was scheming to poison the emperor took hold of public opinion. He was arrested, chained, and put on public display as he was escorted through a series of Italian cities. He died near Pisa, and while the official history isn’t clear on what happened to him, Dante, unlike other writers, refused to absolve him of taking his own life. 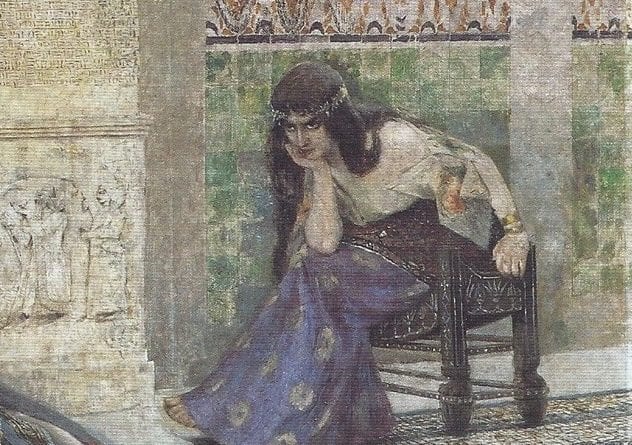 Semiramis is condemned to the Second Circle of Hell for her lustful actions. Although she was a real person, it remains unclear which of the stories told about her are real and which are myth.

A queen of the Assyrian Empire, Semiramis (aka Sammu-Ramat) reigned from 811 to 806 BC. Her reign came between the death of her husband and the coming-of-age of her son, and even after she turned the throne over to him, she continued to have major influence at court. Historical records are scarce, but a period of stability is generally attributed to her.

Later writers were less kind. Roman and Christian historians claimed that she not only feminized and weakened her son, but legalized incest in order to fulfill her basest desires with him. She is accused of being a bloodthirsty tyrant driven by lust, and unfortunately, it is that image that early medieval writers, including Dante, capitalized on. 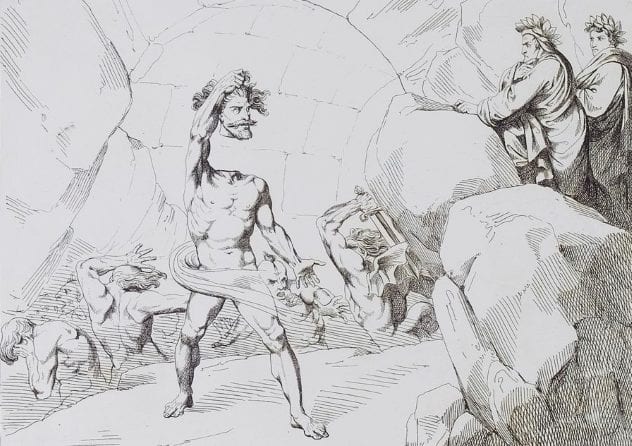 Bertran de Born wanders the Eighth Circle of Hell, carrying his severed head as a symbol of the strife he caused in life by encouraging the conflict between Henry II and his son.

The real Bertran de Born was a French baron, soldier, and poet. He lived at the turn of the 13th century and left behind a large body of work that describes the political turmoil of the time and his role in it. He did attend Henry II Plantagenet at court and eventually swore an oath of rebellion against Henry’s son, Richard, duke of Aquitaine. After Richard’s death, de Born and the other barons were accepted back into the royal fold.

His place in the rebellion that encouraged the schism between father and son earned him a place in Dante’s Hell, in spite of the major charitable contributions made by the real figure, who retired to the life of a monk. 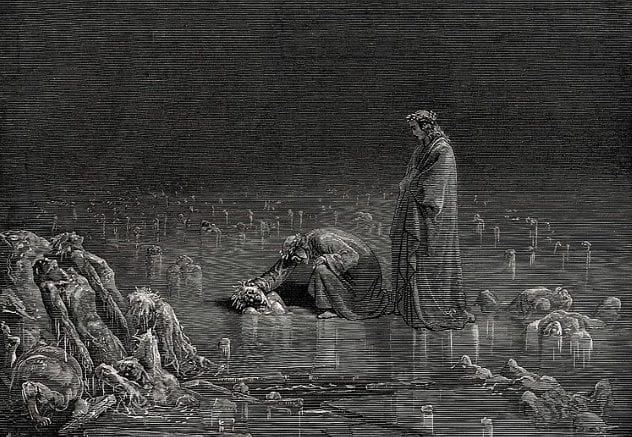 Dante set his master work in 1300, and although Branca d’Oria didn’t die until 1325, Dante saw his crime as being so great that he awarded him a place in the Ninth Circle of Hell. According to the text, d’Oria’s soul was condemned to Hell before he physically died, and a demon ascended to take over his body.

D’Oria was a member of the Ghibellines, and in 1275, the temptation to aid in rushing his inheritance along was too much to resist. His father-in-law, Sardinian governor Michel Zanche, was wealthy, and d’Oria didn’t want to wait for him to die. He recruited a relative (either a cousin or nephew) to help, invited Zanche to his home for a banquet, and killed the entire party from Sardinia. 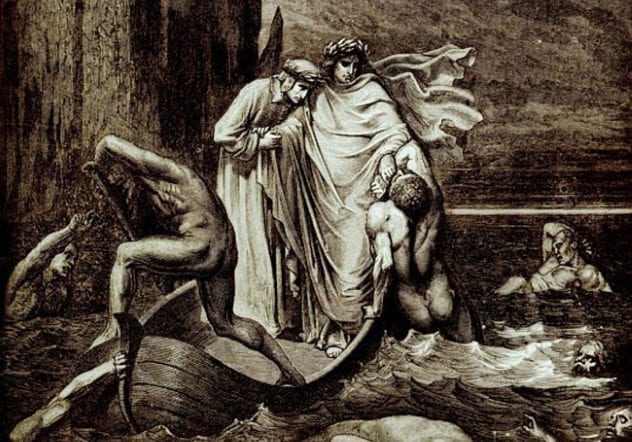 Photo credit: Gustave Dore via The World of Dante

The Fifth Circle of Hell, aka the River Styx, is reserved for the wrathful, and Dante and Virgil find Filippo Argenti there. The scene is a bizarrely personal one, and it shows that some people really will write their enemies into the master work.

Argenti was one of the real Dante’s political rivals, but the animosity between the characters has led historians to suspect there was more reason for hatred. Some suggest that Argenti’s family seized Dante’s property when he was exiled from Florence or that there had been a physical altercation between the two. Regardless, we do know that Argenti was given his name for his bizarre tendency to shoe his horses with silver instead of iron, flaunting his wealth and temper in equal parts.

He also shows up in other works, including Boccaccio’s Decameron, in which he is just as relentlessly violent. 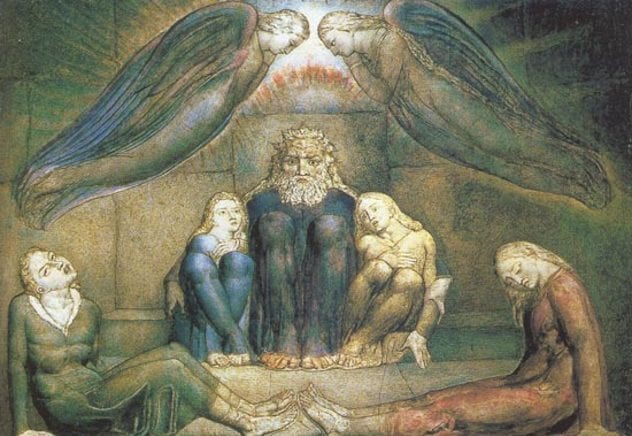 Count Ugolino is condemned to the Ninth Circle of Hell, where he is trapped in the ice with the Archbishop Ruggieri. Ruggeiri says nothing while Ugolino chews endlessly on the other man’s head.

In life, Ruggeiri accused Ugolino of treason and imprisoned him with his sons, leaving them to starve. For centuries, it was said that Ugolino succumbed to the darkest of urges and ate his dead sons to prolong his own life, which condemned him to the deepest circle of Hell.

It was only in 2002 that researchers isolated the remains of the count and tried to determine the true cause of his death as well as whether or not there was any truth to the rumor. It was found that while the count and his sons likely died of starvation, there was no way Ugolino could have been a cannibal. He had no teeth.