The Vikings knew that, one day, all this will end. The Sun will burn out, the world will freeze, and the starving survivors will turn on one another and tear each other apart.

They called it Ragnarok: the end of times, when even the gods would die. They weren’t the only people who accepted that their time on Earth was finite—but these were the Vikings. Their everyday lives were already more brutal and vicious than most people’s concepts of Hell. Their vision of the end had to be horrible to terrify them, and they made what might well be the most brutal apocalypse man has imagined.

10 The Age Of Whoredom 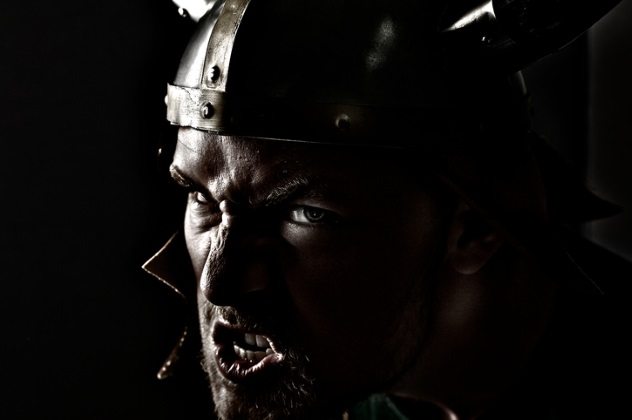 The beginning of the end, the Vikings believed, will come with a Great Winter. For a year and a half, the whole world will be covered in dark, cold frosts, and frozen winds will kill every living thing.

To Scandinavian Vikings, that wasn’t a big deal. They could handle the cold. The problem is how it’ll affect people. The Great Winter, the Vikings believed, was going to start a new age. They called it “The Age of Whoredom.”[1]

When the crops stop growing, humans will turn on another. Families will murder one another and worse. “None shall spare father or son in manslaughter,” the Viking prophecy warns, before making it a little worse by adding, “and in incest.”

When the Vikings got cold, the theory goes, fathers and sons didn’t spare each other in manslaughter—or in incest.

9 A Wolf Eats The Sun 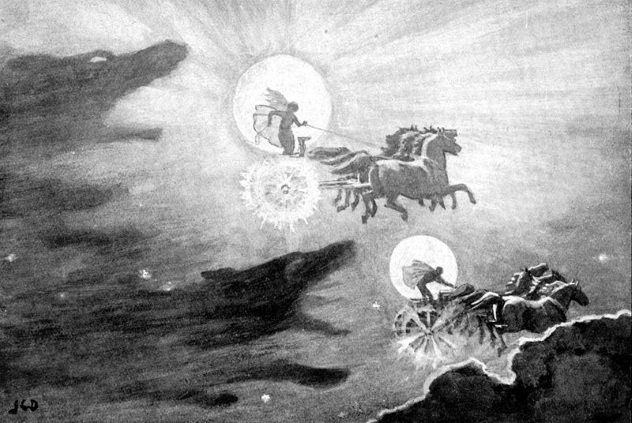 The evil gods of Norse mythology didn’t just try to tempt people into doing bad things or try to buy people’s souls. They just destroyed everything they could touch. Some of the Norse gods were so terrible that humanity couldn’t even survive if they were around. It’s something that makes Viking religion a little unique: The really bad gods are all locked up where they can’t hurt anyone.

The most dangerous of these was the wolf god Fenrir. Sometime before history began, the Norse gods managed to chain him up and pry his jaws apart with a magic sword. But the moment he got loose, they believed, the world would end.

After the Great Winter, Fenrir’s sons stage a breakout. The only way to get their dad out, though, is to literally tear the Earth apart.[2] So, one of his sons swallows the Sun, while another eats the Moon and the stars out the sky. Then, after the sky turns completely black, the whole world starts to shake, and Fenrir’s chains break free.

That’s the second thing that happens in Ragnarok: Every single star gets destroyed. For the Vikings, the total destruction of the universe was just the apocalypse getting started. 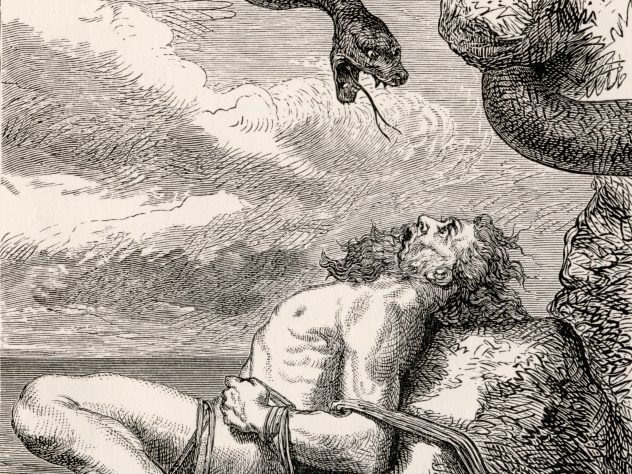 Fenrir isn’t the only one who gets out on Ragnarok. The earthquakes free Loki, the trickster god, who is tied up, too, but his story is way more messed up. Loki was tied up with his own son’s intestines.

The gods made Loki watch as they tore out his son’s entrails and then tied him up with his dead’s sons intestines.[3] They didn’t stop there, either. They also put a venomous snake over Loki’s head and had it slowly drip venom onto his face. Then they made his wife spend the rest of eternity struggling in vain to catch the venom but always failing to protect her husband.

That was a story every Norse mother would tell her children at night. They didn’t need to worry about the trickster god anymore—because he’d been tied up with the intestines of his own child.

It’s pretty brutal, but Loki committed one crime that pushed the gods over the edge. They’d let him get away with a lot—murdering the divine servants, having sex with horses, and trying to poison Odin’s son, to name but a few—but his final sin was the worst. He crashed a party even though we wasn’t invited. For that, his whole family had to suffer. 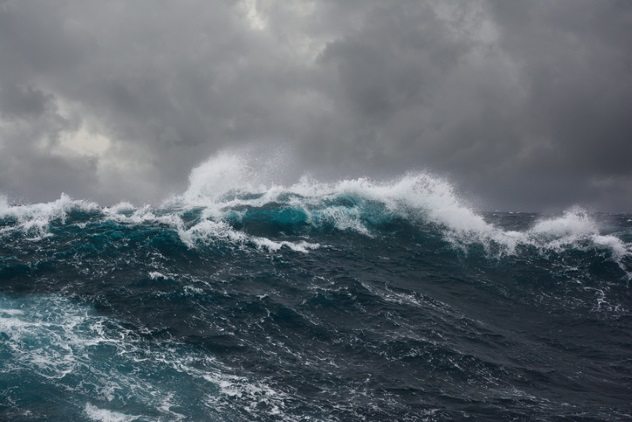 Not every one of the evil gods were locked up. Some were just patiently waiting for their chance at revenge. One of these was the Midgard Serpent, a massive snake coiled around the whole world, hiding from Thor at the bottom of the sea.

When the world starts to shake, the Vikings believed, the Midgard Serpent will come out of the sea and climb onto the land. This is a snake that’s so big it can literally wrap itself around the planet, so when it starts moving, the water won’t exactly stay still. The sea will gush upon the land, and the whole planet will be flooded.[4]

For good measure, the Midgard Serpent will then blow venom into the air and the water. Not only will the world be flooded, but the waters will become toxic, and a poisonous rain will fall from the skies.

6 The Dead Return On A Ship Of Nails 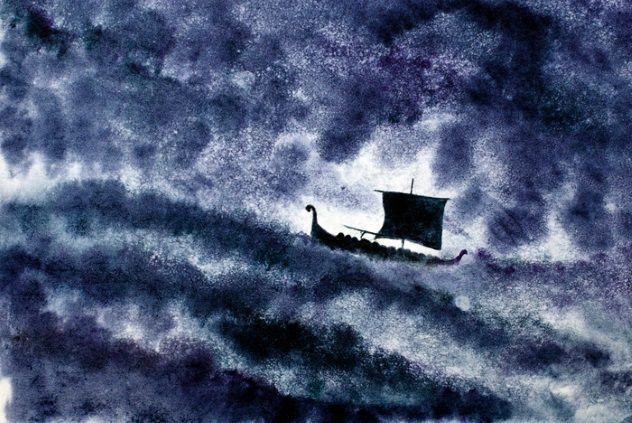 Then the dead will return. They will come on a boat, and a giant named Hrymr will be at the wheel, steering them on the path of war against the gods. At the helm of the ship will be their captain: Loki.

The dead, the Norse believed, have been getting ready for this moment throughout all of human history. Deep in Hel, where evil men go to die, the dead are building a ship called Naglfar, the ship made of nails. That’s a bit weirder than it sounds: In this case, “nails” doesn’t mean carpenter’s nails. It means fingernails and toenails.[5]

At the end of times, the dead will rise on a ship made of toenails—and it’ll be the biggest ship on Earth. The dead get their nails from corpses, so whenever a Norseman died, his brethren had to trim his fingers and feet. Or, if they were particularly meticulous about it, they might even pluck them right off. Otherwise, they were lending a tool for the dead to make their ship of the damned. The world would end, they believed, the second the dead collected enough fingernails.

5 The Gods Will Die 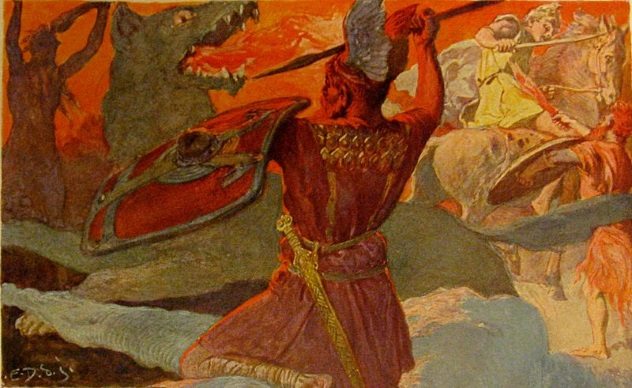 At this point, it’s pretty safe to assume that people will already be dead. For the Vikings, though, the apocalypse didn’t end with the total extermination of all life on Earth. It was about a big battle between the gods.

The gods, Viking prophecies promise, will go to war with Fenrir, the Midgard Serpent, Loki, their giants, and their army of the dead, and pretty well everyone will die. Most simply beat each other to death, with neither side getting out alive.

Thor has the most dramatic death. He will wrestle with the Midgard Serpent, slaughtering it with his hammer. For a brief moment, he will think he has won—until he realizes that he has been bitten and that the serpent’s venom is flowing through his veins.[6] Thor will take nine steps away from that spot. Then he will fall to the ground and die.

4 Odin Must Be Avenged 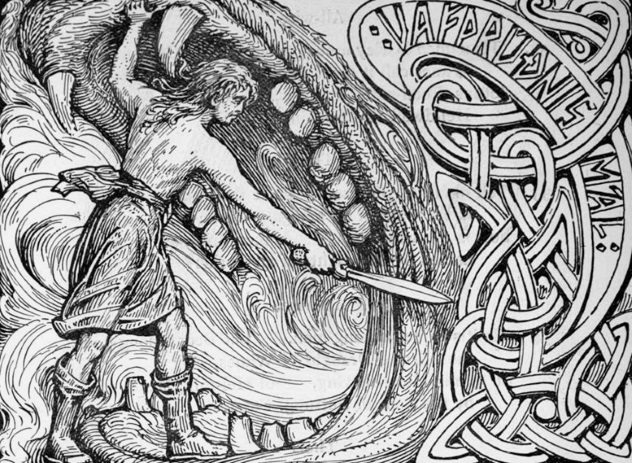 Odin won’t make it out alive, either. He’ll be pitted in battle against Fenrir, who will swallow him whole. Then it’ll be up to his son, Vidarr, to avenge him—and humanity to help.

The only way Vidarr can beat Fenrir is if he has sufficiently high-quality footwear. He has to grab Fenrir’s upper jaw with one hand, step on his lower jaw with a magical boot, and tear the god in half. This, the Norse believed, was going to require a pretty strong boot.

Every Viking was expected to help Vidarr make his enchanted shoes. Just as untrimmed fingernails were put to use in making the boat of the dead, any leather a Viking threw out would go to Vidarr to help him make his magical boots.

Shoemakers in ancient Scandinavia, accordingly, were expected to throw out a few scraps of leather every time they went to work.[7] It was a little wasteful, but it was the least they could do. The fate of the entire universe hinged on it.

3 The World Is Consumed In Flames 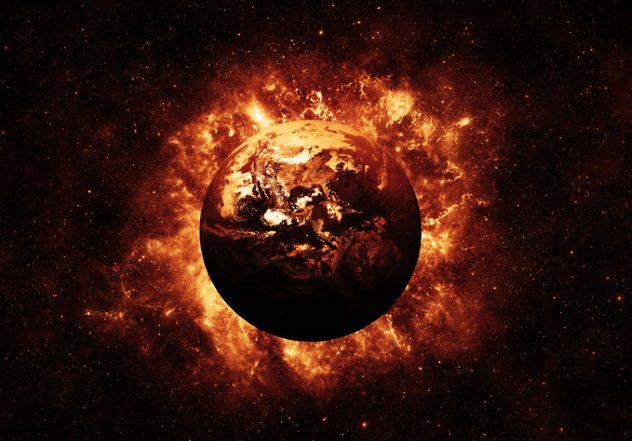 After the last gods are killed and nothing remains, the world will burst into flames—just as an extra little kick in the pants. The fire giant Surtr will kill the god Freyr, the prophecy says, and then throw down his sword, engulfing the world in flames.[8]

“The sun shall be darkened,” the Volva, who predicted Ragnarok, tells Odin, apparently forgetting that just a few minutes ago she’d told him the Sun was going to be swallowed by a wolf. “Smoke-reek rages and reddening fire: the high heat licks against heaven itself.”

The entire planet will burn, killing off the last few straggling survivors who made it this far into the apocalypse. As the prophecy promises, “Dead are all the gods and all the champions and all mankind.”

But the Volva, apparently, wasn’t too concerned about cleaning up plot holes in her prophecy, because she then starts narrating the actions of nine characters who are apparently still alive. So just because she said everyone died doesn’t mean that the apocalypse is over yet.

2 The Great Hall Of Evil 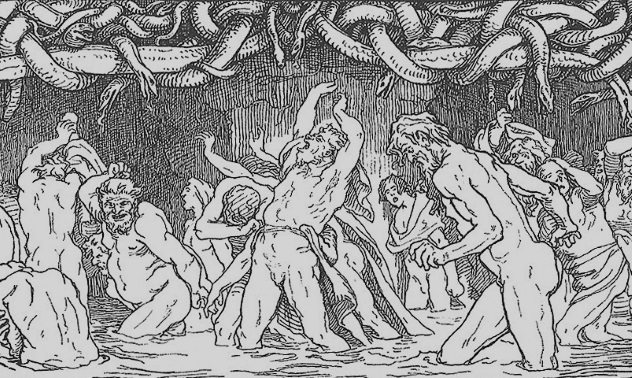 Loki’s army of the dead doesn’t just get to go back to Hel. They—and every person who has murdered or broken an oath—get sent somewhere even worse: Nastrand, the great hall of evil.[9]

Nastrand is a house built out of snakes. The heads of the snakes are pointed inward, every one breathing out clouds of toxic venom and dripping it onto the ground. The house is flooded with it, so every person locked inside is forced to spend all of eternity drowning in a sea of venom.

The good would get to go to Gimle, where they get to drink beer in Heaven—but if you’re really bad, they’d send you to a fate that was supposed to make you wish you were in the venomous snake castle.

The worst fate was to get sent to Hvergelmir, which, before the apocalypse, was the spring from which all rivers flowed. There, at the end of times, a cursed snake called Nidhogg will tear at the corpses of the dead. 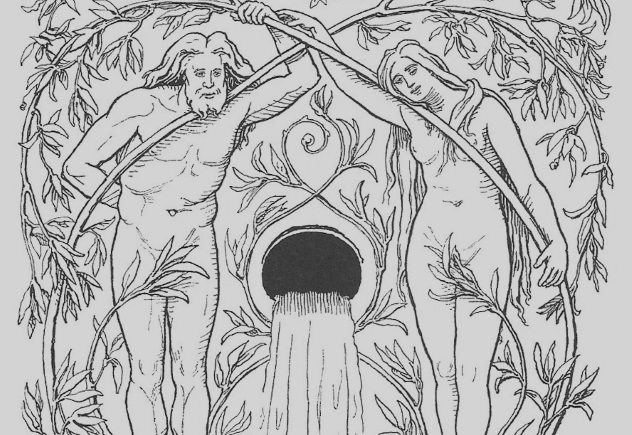 Despite the total destruction of all of existence, six gods and two humans are supposed to get through the apocalypse alive. The surviving gods are the children of Thor and Odin, including Vidarr, who managed to kill Fenrir. And two human beings will survive—because they will spend the whole apocalypse hiding.

Norse prophecies promised that the only human survivors would be a man named Lif and a woman named Lifthrasir, who will hide in a magical forest and just kind of wait the whole apocalypse thing out.[10] They are to sustain themselves throughout it all by feeding on the morning dew in the dales—which sounds beautifully poetic but, in practice, would be pretty terrible.

The Sun will also have a daughter who will take her place, and life will begin again, spread from the last two survivors of humanity.