We have all heard about blackface, that old tradition where white people painted their faces black to imitate black people for performances. It was often seen in popular minstrel shows in the United States during the 19th century.

White people would dress up in an exaggerated way with the goal of mocking and imitating people of color. These shows basically became a thing of the past in the United States when black people spoke up about how offended they were by the concept.

Nowadays in the United States, when blackface is worn, it is met with a lot of controversy on social media. However, that is not always the case in other parts of the world. These are 10 modern-day traditions, performances, or incidents of blackface around the world. 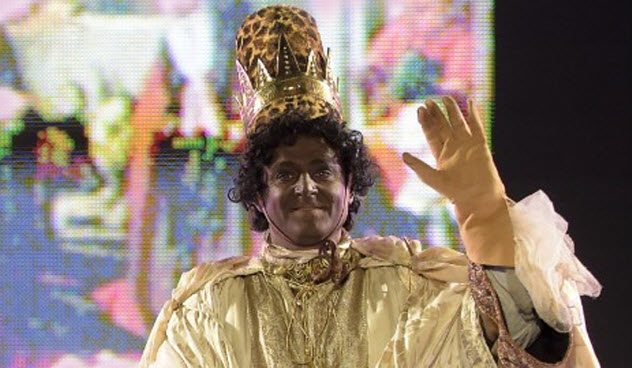 Balthazar is one of the three wise men from the Christmas tradition. In Spain, the convention is that these three men come bearing gifts for children at Christmas celebrations in schools and at community festivals.[1]

According to tradition, Balthazar is black and Spanish people feel that they need to represent this in a physical way. This has caused controversy because this particular wise man dresses up in blackface.

In the last several years, the capital city of Madrid has vowed to hire a black actor to play the part since they have received some backlash from people around the world. However, the tradition of a blacked-up Balthazar has not died out in the rest of the country.

Typically, the city council members want to play this character and they are usually white. In Spanish society, council members get preference for these roles. Furthermore, many smaller villages claim that they have no people of color who could play Balthazar. So this often means they continue to use blackface since physically representing his black skin is important to them. 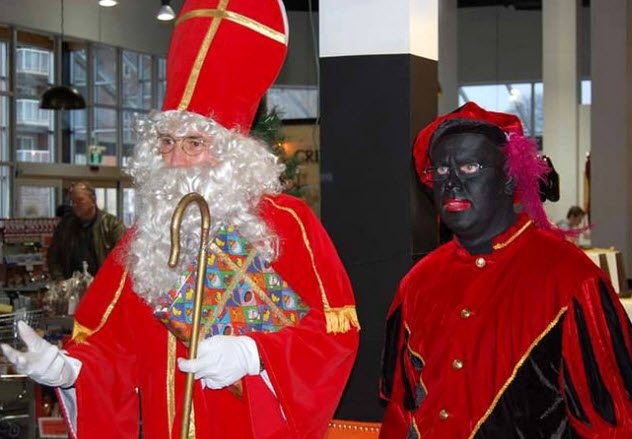 Zwarte Piet (aka Black Pete) is another Christmas character. This character is most popular in the Netherlands. He is thought to be a Moorish servant of Saint Nicholas who came with him on his travels.

This character appears in parades and celebrations in the Netherlands as well as in Belgium. He has dark curly hair, red lips, and a blackened face.

Zwarte Piet has also been met with controversy in recent years. Some claim that the character has no ties to racism in the past and that it’s tradition. Others believe that while the past intentions might not have been racist, modern sensibilities make it racist now and it should be stopped.[2]

Like other forms of blackface, some people feel that Zwarte Piet exaggerates the features of black people in a less than flattering way. Others believe that this character was created to humanize a dark gargoyle from Dutch tradition so as not to scare little children at Christmas. 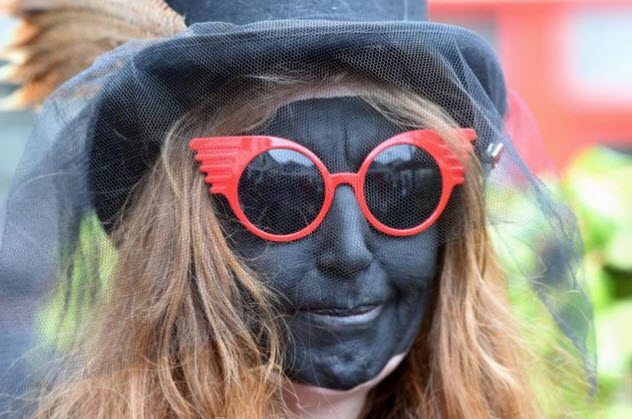 This tradition of the Morris dancers dates back to the 16th century. It comes from the English side of the Wales-England border and is a folk dance where people paint their faces black. Some think it started when farmworkers would beg for food in the winter.

It was illegal to beg. So the farmworkers would paint their faces to hide their identities to avoid trouble with the law. Others believe that the roots came from imitating African dancers.

There has been recent controversy surrounding this tradition as well. The Shrewsbury Folk Festival has now banned the tradition of a painted black face among these dancers.[3] The year 2016 was the last year that the festival would allow acts with faces painted black.

Despite contemporary beliefs that blackface is racist, some people were upset and argued that the decision to ban painted black faces was taking away from tradition. They also argued that the roots of this tradition do not have racist intentions. 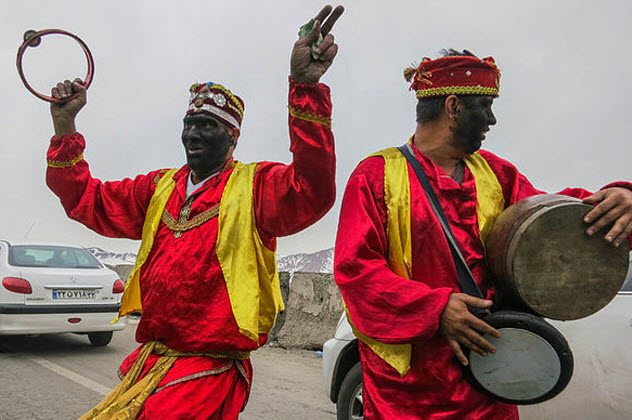 This character comes from Iran. Haji Firuz also shows up at Christmastime as a sort of Santa Claus except that his face is painted black. It is thought that this character comes from a depiction of an African slave serving his master.[4] In fact, he has a little song that goes along with his character that makes reference to him being a slave. The song is sometimes sung around this time.

In reality, slaves were thought to have arrived in Iran from the Indian Ocean slave trade, which went between East Africa and the Middle East. Slavery was legal in Iran until 1929. As a result, modern-day Iran has people of color living in their society who may be offended by this depiction. 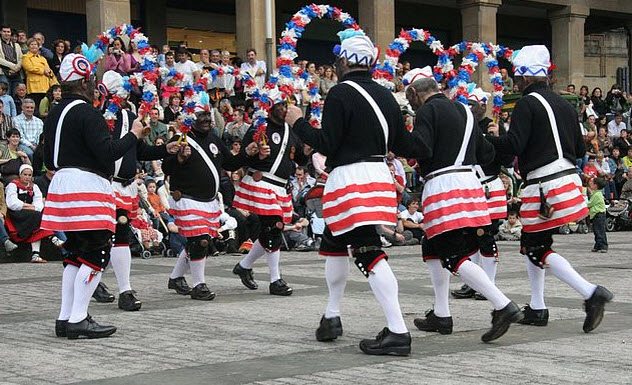 This is a particular Morris-style dance troupe that hails from England. Its nickname is the nut dance. The performers come from the town of Bacup and have strange costumes consisting of a red-and-white hooped skirt and a blacked-up face. The roots of this town’s tradition are thought to have come from Moorish tin miners who came to the town for work centuries ago.

Like the other Morris-style dances, this one has also been met with controversy about racism. However, it is still performed. Many claim that there were no racist intentions and that the black faces are related to the way miners look after a day of hard work.[5] 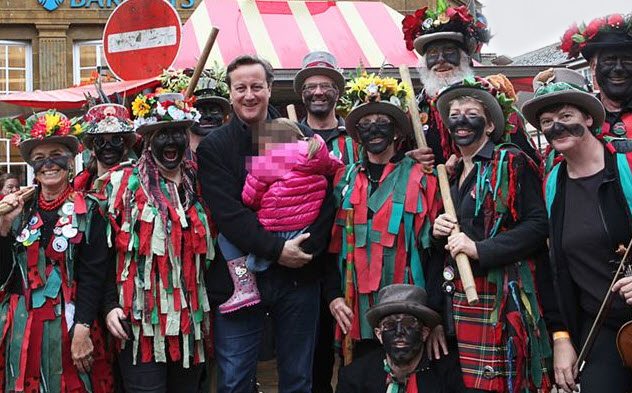 In the United Kingdom, this festival happens every year on Boxing Day and New Year’s Day in the town of Padstow. The celebration is believed to have pagan roots. The actors are supposed to dress up in blackface. Traditionally, this disguise allowed them to go crazy and perform in outlandish ways for money and food.

When the minstrel shows in the United States became popular, the Padstow performances started having some racist undertones. The N-word has been heard in some songs and chants as some traditional songs were replaced with more minstrel-style numbers from the US. The police were even brought in twice to film the event.[6] 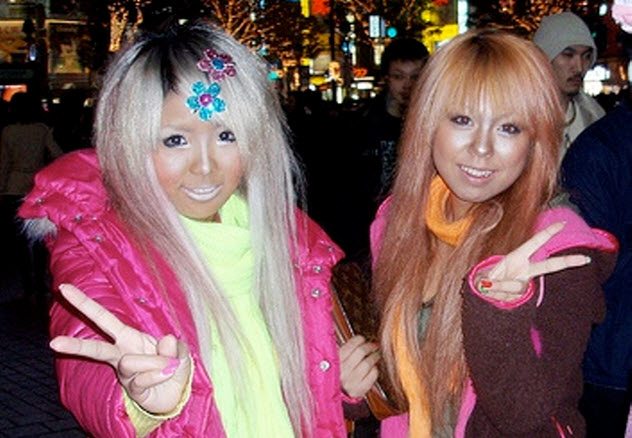 Ganguro is a style of dress in Japan that is popular among teenage girls. These girls want to imitate features from American hip-hop artists. This includes painting their faces black as well as using shimmery makeup, blonde hair, and colorful fashions. This trend is popular in major Japanese cities such as Tokyo.[7]

Some think that these girls want to rebel against having to wear a school uniform or against their normal life in general. Others think that they just want to imitate hip-hop artists whom they admire. 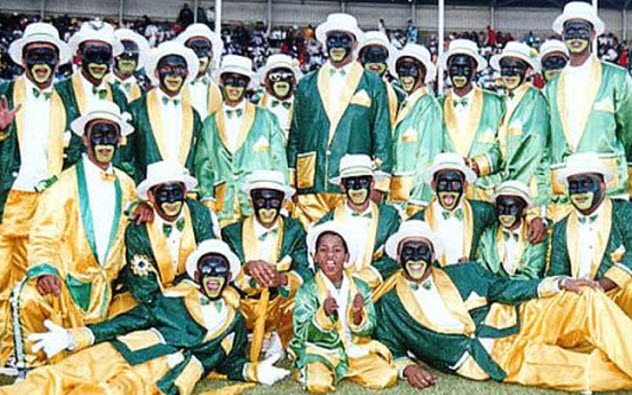 Kaapse Klopse is an annual South African festival. This celebration has a minstrel show that features people in blackface. It is thought that it was also influenced by the minstrel shows from the United States.[8]

South Africa has a history filled with racism and racist policies. It’s not entirely surprising that blackface was used here for performances. Even though apartheid is over, this tradition continues today. 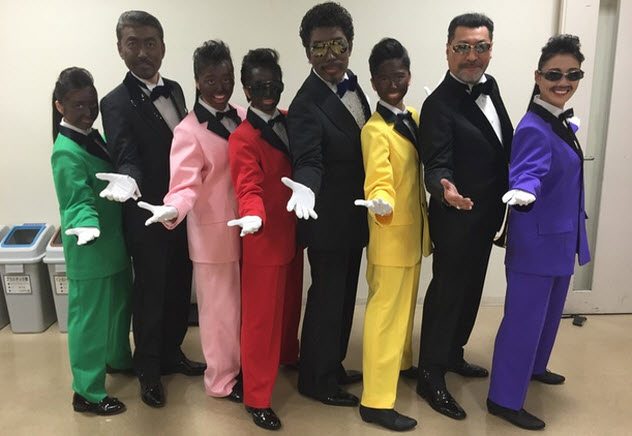 Like ganguro, this also comes from Japan. However, this time, it comes from a popular J-pop musical group called Rats and Star. Since this group became popular in the 1980s, they have been wearing blackface.[9]

What caused some controversy was a photo posted on Twitter (pictured above). The group was to perform on TV with the group Momoiro Clover Z. The photo has gone viral since a New York Times reporter and others shared it. 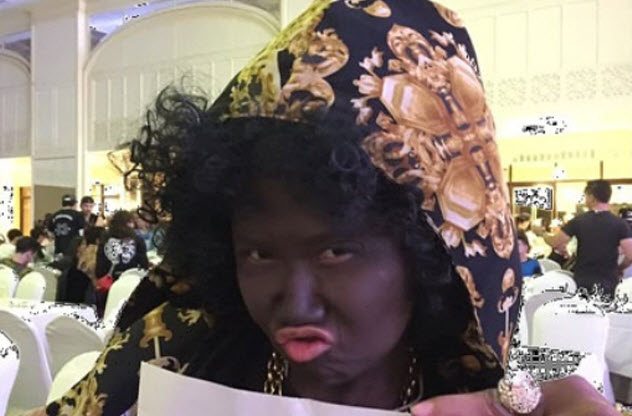 Like Japan, Thailand does not have just one case of modern-day blackface. Rather, it can be seen in the media and advertisements as well. In 2016, comedian Pajaree Na Nakorn wore blackface as part of a costume to a party. In 2013, a Dunkin’ Donuts advertisement also featured a woman with a painted black face.[10]

It was taken down since it received lots of backlash on the Internet. Both events caused more outrage outside of Thailand than within the country. Thai people often saw no issue with dressing up this way. In Thailand, the people claim to have no racist intentions. They just think of it as a joke.

Read about more disappearing traditions on 10 Unique Cultural Traditions That May Soon Disappear and 10 Bizarre Traditions Of Love That Are Lost In History.