Many variables determine how well a movie does at the box office. They include the quality of the script, the talent of the director and the actors, the caliber of the cinematography, the contributions of other crew members, the movie’s publicity, and critical and audience responses, to name a few.

Sometimes overlooked, another factor in a film’s financial success is the idea, observation, or experience that inspired the movie. At the time of this writing, the ten horror films on this list have made more money than any others in their genre.[1] Here’s what inspired them.

Stephen Sommers’s 2004 film Van Helsing, starring Hugh Jackman and Kate Beckinsale, is the tenth-top-grossing horror movie of all time, having earned $300.25 million. It features a number of monsters from the Universal horror movies of the 1930s and 1940s as monster hunter Gabriel Van Helsing pursues not only Dracula but also Mr. Hyde and the Wolf Man. Van Helsing is based on the character of the same surname who appears in Bram Stoker’s 1897 novel Dracula as the vampire’s nemesis.

Because of the presence of so many monsters’ familiar faces, movie reviewer Todd McCarthy characterized Van Helsing as “a monster mash on steroids” and suggested its success or failure would depend on such factors as the viewer’s age and “respect for genre tradition.” Judging by its box office receipts, the audience was old enough, in general, to respect the tradition.[2]

In The Conjuring, director James Wan conjured up a tremendous success. The 2013 movie brought in $318 million at the box office. Starring Vera Farmiga and Patrick Wilson, it recounts a paranormal investigation of the alleged haunting of the Perron family in Rhode Island, who lived in a farmhouse outside Harrisville.

According to Andrea Perron, one of the family’s daughters and the author of the 2011 book House of Darkness House of Light, which offers her account of her family’s experience, the movie is based on the actual case files of paranormal investigators Ed and Lorraine Warren. The Perron family themselves supported the film, she said, as did Lorraine, who consulted with Wan in the making of the motion picture.

The “most haunting” ghost in the movie was that of supposed witch Bathsheba Sherman, who lived on the farm next door to the Perrons’ during the 19th century. When a baby in Sherman’s care died from a wound caused by the insertion of a large sewing needle into the base of her skull, Sherman was suspected of having sacrificed the child to the Devil. She was acquitted due to a lack of evidence, but her reputation was ruined. After learning that Andrea’s mother, Carolyn, was once mysteriously stabbed in the calf by what might have been a sewing needle, the Warrens suggested the culprit was Sherman’s ghost, who’d taken her needle with her to the afterlife.

Before the Perrons lived in the farmhouse, eight generations of the Arnold family resided there, Andrea said. Public records indicate that, during the Arnolds’ occupancy of the house, a litany of horrors occurred: Two people hanged themselves, one committed suicide with poison, 11-year-old Prudence Arnold was raped and murdered by a farmhand, two people drowned, and four men froze to death. Everyone who’s ever lived in the house has experienced some sort of paranormal activity, she said.[3] 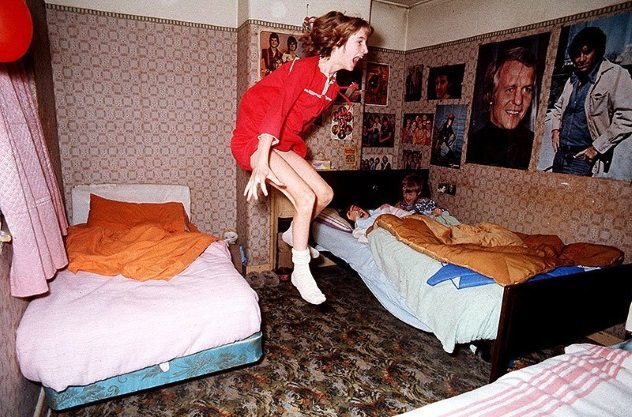 In The Conjuring 2, the Warrens travel to London to investigate poltergeist activity. Two daughters, Margaret and Janet Hodgson, ages 12 and 11, respectively, who share a bedroom, may be possessed by the Devil. Released in 2016, the movie made $320.2 million.

The real Hodgsons claim they’ve heard strange voices, witnessed objects and even furniture levitating and moving on their own, and felt “cold breezes.” A newspaper enlisted the services of the Society for Psychical Research (SPR), which dispatched paranormal investigator Maurice Grosse, who said he witnessed over 2,000 supernatural incidents during his sojourn in the house. Janet said these incidents included “furniture turning over, cups filled with water, fires igniting, voices, levitation,” and, most terrifying of all, a curtain that “wrapped itself around [her] neck.” Then, the house began to talk, using Janet’s vocal cords as its instrument.

Skeptics say the girls’ claims are all a hoax. SPR investigators challenged Janet’s “gruff voice,” and the girls were caught bending spoons. Janet admitted that she and her siblings faked some of the events, although she insisted that 98 percent of the incidents were genuine.

In the movie, Grosse’s participation in the investigation is reduced to a consulting role, and the Warrens’ involvement becomes central, whereas, in fact, the opposite was true in real life.[4]

Walking the streets of New York City and viewing Klute and The French Connection inspired the 1995 film Se7en, which took in $327.3 million dollars. Directed by David Fincher, the movie focuses on the efforts of Detectives David Mills (Brad Pitt) and William Sommerset (Morgan Freeman) to bring to justice a serial killer who bases his murders on the seven deadly sins.

Although the Catholic Church’s doctrine concerning such sins inspired the murderer’s motive, cinematography was also essential in capturing the dark tone of the neo-noir film, and its cinematographer, Darius Khondji, recalled Fincher showing him Klute and The French Connection to give him the idea of the raw, gritty feel he wanted the picture to convey.

Khondji said emotions he experienced while walking New York’s streets also inspired him during his filming of the movie. He said the streets “always filled [him] with feelings of insecurity,” with a sense of “being lost in the crowd, lost in places that [he felt] so good visually about, but at the same time scared [him] personally.”[5] 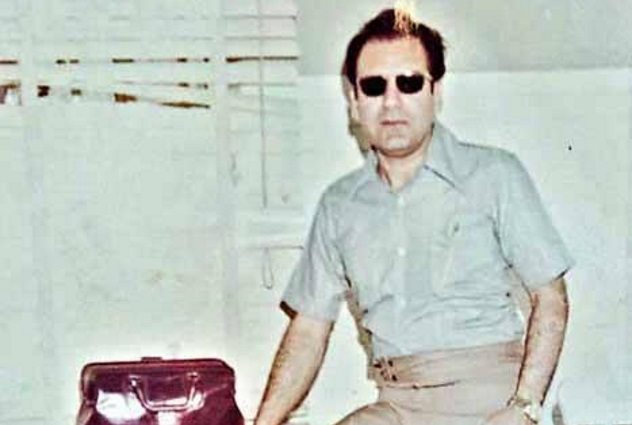 Based on Thomas Harris’s novel of the same name, director Ridley Scott’s 2001 movie Hannibal, starring Sir Anthony Hopkins and Julianne Moore, made $351.6 million. The movie is a sequel to Jonathan Demme’s 1991 Academy Award–winning film The Silence of the Lambs, starring Hopkins and Jodie Foster. Harris’s novel is the primary source for Hannibal, but the Lecter character himself is based on a Mexican physician, Dr. Alfredo Balli Trevino.

Harris met Trevino during a trip to Monterrey, Mexico, to interview an American inmate accused of murder. A journalist at the time, Harris was following up a magazine story he’d written about a Nuevo Leon State Prison inmate, Dykes Askew Simmons, a mental patient who was to be executed for the murder of three victims.

Simmons had bribed a guard to leave his door unlocked and provide him a pistol so he could escape, but the guard double-crossed him. After taking Simmons’s money, he kept the door locked and shot the prisoner. Trevino, a doctor, saved Simmons’s life. Harris wanted to hear how the physician had tended Simmons’s wounds. After the interview, Harris learned that Trevino didn’t work at the prison; the doctor was its most notorious inmate. Incurably insane, Trevino would never leave the prison alive, a guard told Harris.

As he wrote his novel, Harris sought a character who would have “a peculiar understanding of the criminal mind.” Trevino was his model.[6]

Film critic Corey Atad sees the motion picture as having been inspired, in part, at least, by science fiction writer H. G. Wells’s 1987 serialized novel The War of the Worlds. In Wells’s story, Martian invaders are killed by bacteria. In Shyamalan’s film, the alien invader succumbs to water, which affects the creature as if it were acid.[7]

The inspiration for William Peter Blatty’s 1971 novel The Exorcist was a supposedly true case of demonic possession. The victim was a teenage boy identified in the journal of the exorcism kept by Father Raymond Bishop as “Roland Doe,” a German Lutheran teenager who lived with his family in Cottage City, Maryland.

The possession occurred shortly after Doe used an Ouija board to contact his late Aunt Harriet, a spiritualist who introduced him to the board. Many of the incidents in the movie match those that allegedly took place during Doe’s possession, and like the film’s possessed girl, Regan MacNeil, Doe was examined by both medical doctors and psychiatrists, who found no explanation for his bizarre behavior. With the Church’s blessing, Reverend William S. Bowdern, assisted by Father Walter Halloran and Reverend William Van Roo, performed the exorcism, and Bowdern recorded its details in his journal. 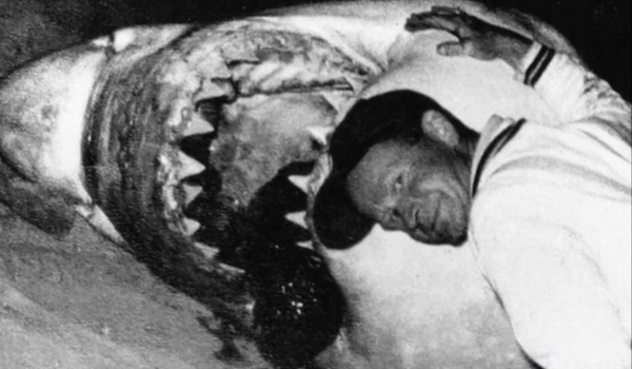 A series of attacks in 1916, which were said to have inspired Peter Benchley’s novel Jaws, weren’t the source of his idea for the story, according to novelist himself.

Instead, a 1964 newspaper story concerning Frank Mundus, a fisherman who’d managed to catch a 2,040-kilogram (4,500 lb) great white shark off the coast of Long Island, suggested the plot of his 1974 novel.[9] Upon seeing the item, Benchley, who’d been fascinated by the predators since his youth, wondered, “Lord! What would happen if one of those monsters came into a resort community and wouldn’t go away?”

The answer to his question became the plot of the novel, and the novel, in turn, inspired the 1975 movie of the same name, directed by Steven Spielberg and starring Roy Scheider and Richard Dreyfuss. Robert Shaw, who played the shark hunter Quint, based his interpretation of his character on Mundus. Jaws earned $470.6 million, the third-highest amount ever for a horror movie.

Stephen King has stated that a folktale inspired his 1986 novel, IT, which, in turn, spawned the 2017 movie of the same title. Directed by Andy Muschietti and starring Jaeden Lieberher and Bill Skarsgard, IT is currently the second-highest-grossing horror film of all time, having earned $555.6 million as of October 1.

According to King, in 1978, he was on his way to pick up his car, which had “dropped its transmission—literally” on a street in Boulder, Colorado. Walking, he reached the “narrow, unlit road” to the dealership on the outskirts of town, just as twilight fell. About halfway to his destination, an arched, wooden bridge spanned a stream cutting through the road. The sound of his bootheels on the bridge made him remember a line from “Three Billy Goats Gruff”: “Who is trip-trapping upon my bridge?” He decided to write “a novel about a real troll under a real bridge.”

The bridge became both the novel’s city and the breezeway connecting the town library’s adult and children sections and, metaphorically, adulthood and childhood, while the troll became It, the shape-shifting monster inhabiting the city’s sewers.[10]

In first place as the biggest blockbuster in the history of horror films to date is M. Night Shyamalan’s 1999 hit The Sixth Sense, starring Bruce Willis. The movie earned a whopping $672.8 million!

Although it was once believed that a Nickelodeon series, Are You Afraid of the Dark?, was the basis for the film, Shyamalan himself denied this, saying he’d never heard of the show.

The movie, Shyamalan said, was suggested by something he saw at a funeral wake. As people talked over food, Shyamalan noticed a boy seated on a flight of stairs, talking to someone. But there was no one there besides the boy himself, and Shyamalan, intrigued, wondered “what the child was feeling, and who he was.” It occurred to him that the boy might have been speaking to the person being mourned.[11]

Read more about movies and their inspirations on 10 Frightening Movies Based On True Stories and 10 Ridiculous Movie Plots That Were Inspired By Real Events.