Snacks are a big part of our lives. An after-school snack is a custom that most of us grow up with. Popcorn is a necessity at the movie theater, and chips are perfect for munching on in front of the TV at home.

You wouldn’t throw a party without supplying some sort of finger-food spread. Checkout lanes at many stores are stocked with a variety of snacks, allowing us to make a last-minute grab for something to tide us over until the next meal.

But some of the most popular—and tastiest—snacks have an unappetizing side you might not be aware of.

10 Cheetos Mess With Your Mind 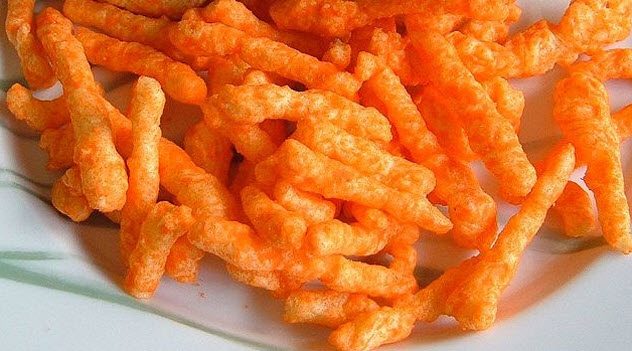 Orange-stained fingers are a small price to pay for this delightfully cheesy snack. Classic crunchy Cheetos have been around for almost 70 years. Introduced by Frito-Lay in 1948, the cheese-dusted cornmeal puffs are still one of the top brands in snacking.

But Cheetos did not become insanely popular by accident.

According to food scientist Steven Witherly, Cheetos are an example of “vanishing caloric density.” When a food melts quickly in your mouth, it tricks the brain into thinking that no calories have been consumed.[1] If your brain does not think you are consuming any calories, then it does not send a message to your stomach that you are full.

This makes it easy to plow through an entire bag of Cheetos at once because of their light and airy design. Which is exactly what the manufacturers intended.

9 Pretzels Are Bathed In Lye 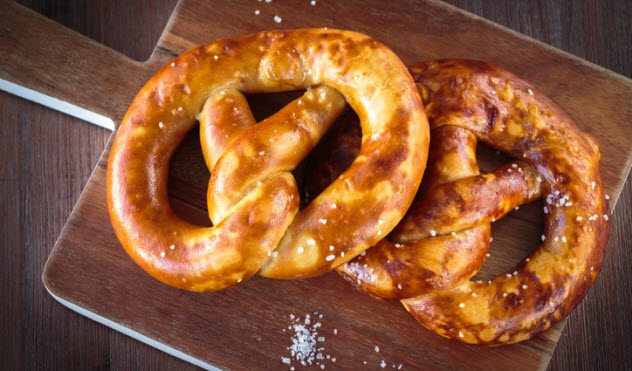 Those warm, soft pretzels that are perfect for tearing into chunks and eating might have been dipped in a caustic chemical that is capable of dissolving glass.

Lye is commonly used to make soap and unclog drains. It is also used to make traditional Bavarian-style soft pretzels. The pretzel dough is dipped into a mixture of water and lye before being baked. The lye bath is a browning agent that gives pretzels their color.

If no browning agent had been applied to the dough before baking, the pretzels would come out of the oven white. A mix of hot water and baking soda can also be used as a browning agent, but many bakers believe that the lye method yields the best results.[2]

Bakers typically use food-grade lye for this process. Food-grade lye is produced and packaged in a regulated way but remains the chemical equivalent of the cleaning solution. 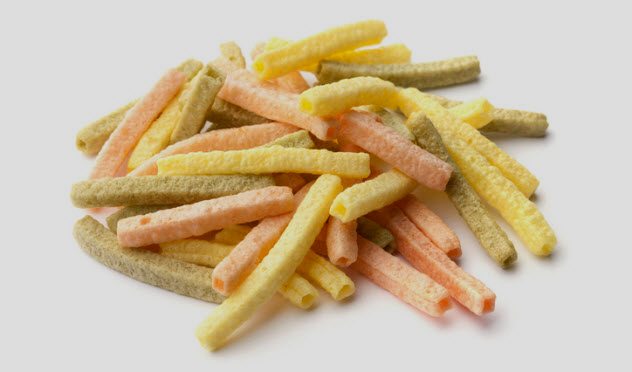 John Solak and Jim Figger filed a class action lawsuit against Sensible Portions, accusing the company of using false and deceptive marketing to convince consumers that their product is healthier than it really is. Solak and Figger say that they paid a higher price for Garden Veggie Straws compared to other snacks because they believed the product was made from whole vegetables.

The lawsuit states that the plaintiffs never would have purchased Garden Veggie Straws if they had known the product contained only vegetable by-products that lack the nutrients and vitamins found in whole vegetables. Along with monetary compensation, Solak and Figger are seeking an injunction that would prohibit Sensible Portions from continuing to falsely advertise their products in the future.[3]

However, that is the only area where the straws trump the chips. Garden Veggie Straws also contain more sodium per serving than Lay’s Classic potato chips, while the chips have higher amounts of dietary fiber, protein, and vitamins.

7 Jerky Is A Carcinogen 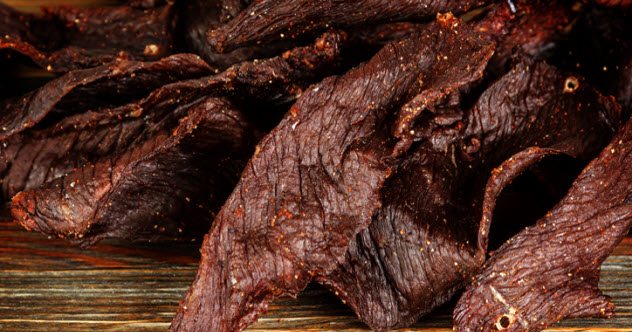 Jerky seems like a good choice for anyone looking to snack on something loaded with protein. But you might want to find your energy boost elsewhere.

The World Health Organization has classified processed meat as a Group One carcinogen, meaning that convincing evidence exists that the meat causes cancer. Processed meats, including jerky, have been linked to colorectal cancer.

About 34,000 cancer deaths per year worldwide are attributable to diets that are high in processed meat. The more processed meat you consume, the higher your risk becomes. Studies estimate that every 50-gram portion of processed meat eaten daily increases the risk of colorectal cancer by 18 percent.[4]

The specific process by which consuming processed meat increases the risk of colorectal cancer is not yet known, but it is likely related to chemicals that are formed when meat is processed or cooked. Some of these chemicals are known or suspected carcinogens.

6 Gummy Bears Are More Than Just Sugar And Spice 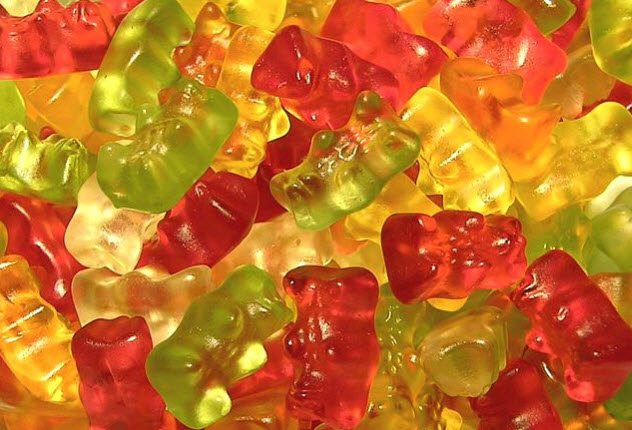 These snacks are chewy and adorable. They also contain the leftovers from slaughterhouses. Gold-Bears from Haribo are the original gummy bears. Their nutrition page lists gelatin as the ingredient responsible for their trademark chewiness.

Gelatin is a versatile ingredient that comes from animal collagen. In the Middle Ages, it was discovered that animal bones and hides boiled in water created a broth that solidified when cooled. Back then, making gelatin was a long process that involved boiling animal parts for six hours. Only wealthy households with many servants could accomplish the task.[5]

Today, gelatin is commercially manufactured worldwide. Therefore, you do not have to be wealthy to enjoy the chewy gummy bears that owe their existence to boiled animal parts.

5 Takis Can Erode Your Stomach Lining 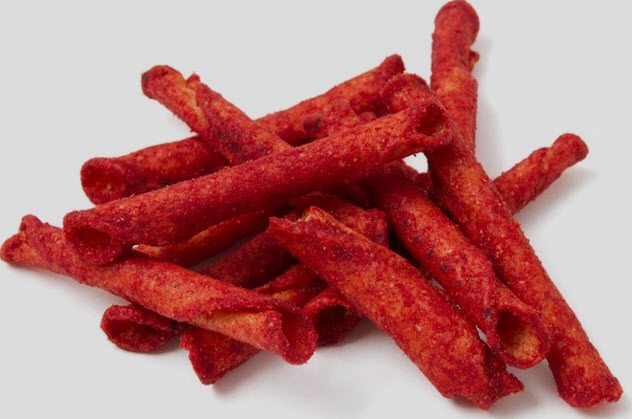 Takis are mini rolled corn chips that come in a variety of flavors. In particular, the spicy flavors have become a hit, especially among kids. But this obsession is sending people to the hospital, and some spicy snack food brands have even been banned by school districts.

People are ending up in the emergency room with gastritis after eating snacks such as Takis. Gastritis is an inflammation or erosion of the stomach lining. Some of the symptoms include abdominal pain, nausea, and a burning sensation in the stomach.

Twelve-year-old Andrew Medina of Los Angeles was taken to the doctor because of abdominal pain. He said that it felt similar to a bruise. He also said that he ate 20–30 bags of spicy chips every month.[6]

Dr. Robert Glatter, an emergency room physician, believes that the flavoring on spicy snacks affects the pH levels in the stomach, causing it to become painfully acidic. Some kids suffer from stomachaches so severe that they arrive at the hospital doubled over in pain.

4 French Fries Are Worse Than You Thought 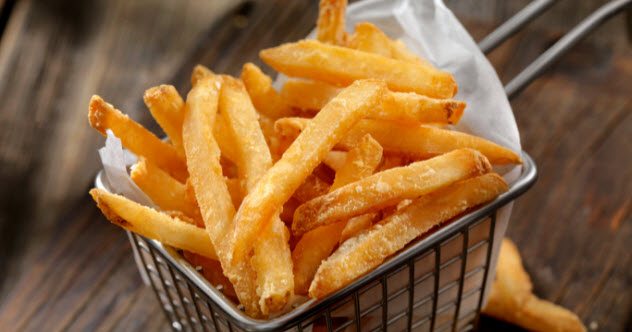 Due to their high sodium and fat content, french fries are not considered a healthy snack choice to begin with. But they also contain a chemical called acrylamide. First found in certain foods in 2002, acrylamide was recognized as a major concern for humans based on its ability to cause cancer in laboratory animals.

The chemical is not found in raw potatoes. It is formed when they are cooked using high temperature methods such as frying. Researchers have discovered that french fries contain higher levels of acrylamide than other foods.

3 Fruit Snacks Are No Better Than Candy 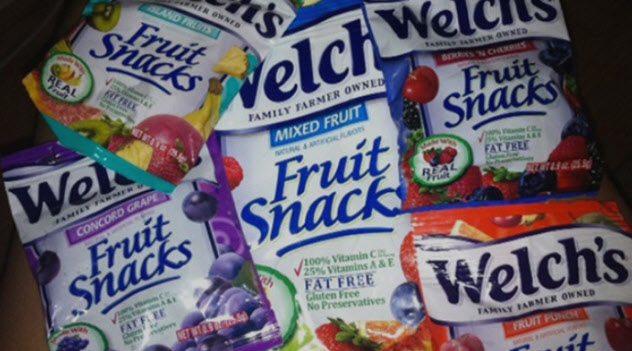 Fruit snacks are marketed as a healthy source of vitamins. Many package labels state that they are made with real fruit and contain the daily recommended amount of vitamin C. But that does not mean fruit snacks measure up to real strawberries or bananas. Nutritionally, fruit snacks have more in common with candy than actual fruit.

Fruit snacks lack dietary fiber, an important nutrient supplied by fresh fruit. If you eat just two small pouches of Welch’s Fruit Snacks, you have consumed the same amount of calories and sugar that are in a pack of Starburst candies.

The makers of Welch’s Fruit Snacks are facing a class action lawsuit alleging that their labels are false and misleading. Plaintiff Lauren Hall claims that the company’s labels promise more nutritional benefits than what their product delivers. Hall says that sugar makes up 40 percent of each serving of fruit snacks and as much as 60 percent of Welch’s Fruit ‘n Yogurt Snacks.[8]

It remains to be seen if the lawsuit will result in fruit snacks being moved to the candy aisle. 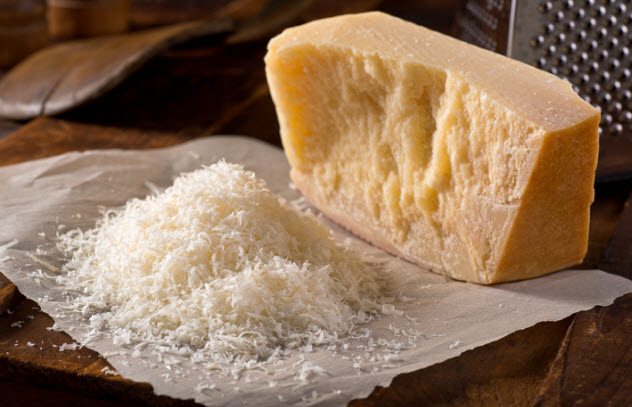 Cheese is a popular snack in many forms. String cheese is added to sack lunches, block cheese is sliced for cracker toppings, and shredded cheese is melted over chips to make homemade nachos.

Some cheeses are made using an enzyme called rennet. This enzyme curdles milk during the process of making cheese. It can be found in the fourth stomach of young calves and other milk-fed young mammals.[9]

Natural calf rennet is a by-product of veal. Rennet must be extracted from calves that have been slaughtered before they are weaned. Older calves that have eaten grain or grass do not have the same level of the enzyme in their stomach.

It is thought that rennet was discovered accidentally by ancient Egyptians. They stored milk in containers made from animal stomachs, and the enzyme would have caused the milk to separate into curds.

For people who do not eat meat for ethical reasons, this little-known fact about some cheeses can be an unpleasant discovery.

1 Popcorn Can Damage Your Lungs 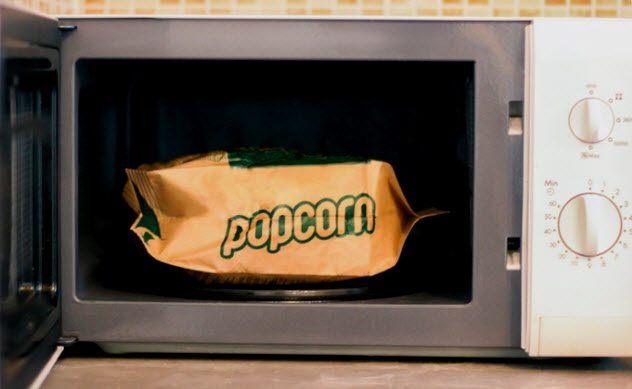 Popcorn is one of the oldest known snacks. Archaeologists have found evidence that popcorn was made as early as 6,700 years ago in Peru. Back then, popcorn was made by resting a cob on hot coals or heating it directly over a flame.

Today, microwave popcorn makes it easy to enjoy the snack without building a fire. Anyone who has ever popped a bag of popcorn in the microwave knows how good it smells.

But the buttery flavoring that smells so good contains chemicals. Inhaling these chemicals has been proven to cause damage to the lungs. Workers in microwave popcorn manufacturing plants have developed “popcorn lung” after being exposed to the chemical vapors on a regular basis. “Popcorn lung” refers to a condition where the smallest airways of the lungs are damaged and become narrower, making it harder to breathe.

However, it is not just the workers in manufacturing plants who are at risk for popcorn-related lung damage. Wayne Watson of Colorado developed “popcorn lung” after eating two bags of microwave popcorn every day for 10 years. After being diagnosed with lung damage, Watson sued the manufacturer and retailers of the popcorn he had eaten.

He was awarded $7 million dollars in 2012.[10] Watson said that he no longer eats two bags of popcorn each day and only has the snack once in a while when it is prepared on a stovetop.

Read about more foods that are surprisingly bad for you on 10 Horrifyingly Deadly Sweets And Treats and 10 Unhealthy Foods You Think are Healthy.