Archaeologists have long known that buried structures emit a different heat signature than the surrounding earth. However, low-altitude flights equipped with thermal units are cost-prohibitive—not to mention dangerous. Now, drones can see what archaeologists previously only dreamed about.

Aerial technologies have crossed a threshold of functionality, affordability, and near-instant data processing. Recent discoveries prove that drones are the future of archaeology. The only remaining question: Who will embrace the technology, and who will get left behind?

10 House Of The Dead 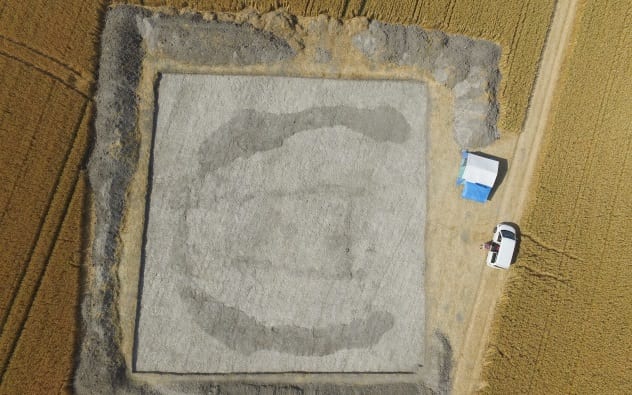 In July 2017, researchers discovered a 5,600-year-old “House of the Dead” on England’s Salisbury Plain. Located halfway between Avebury and Stonehenge, the site had been plowed flat. Aerial photographs from unmanned vehicles revealed hidden structures below: a long barrow burial mound in an area called Cat’s Brain in Wiltshire’s Pewsey Vale. Dated to the Neolithic period, the ancient burial site could contain the remains of the ancestors of Stonehenge’s builders. Two ditches flank a central building. Researchers believe earth from the ditches covered the central building in a mound.[1]

The “House of the Dead” dates to the introduction of agriculture and monument building in Britain. Researchers are uncertain why there are so many ancient sites on the Salisbury Plain. Some hypothesize that a lack of modern settlement in the area has prevented their destruction. Others believe the Avon and Kent river valleys had special significance for Britain’s ancient inhabitants. 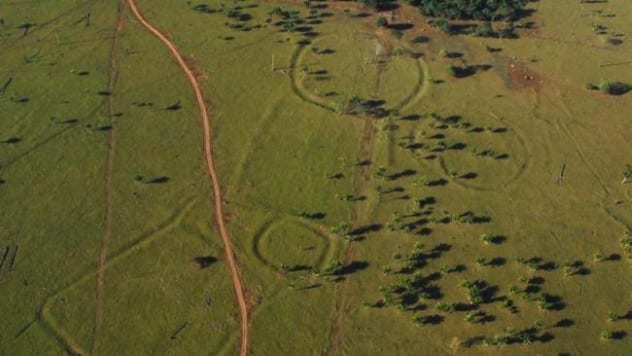 In early 2017, researchers discovered ancient Amazonian earthworks in the state of Acre in Brazil. Hidden beneath earth and trees, the 2,000-year-old structures were discovered via drones. The inner wall enclosure and outer ditch design are classic henge arrangements. The early Stonehenge construction phase had a nearly identical design. Researchers hypothesize that these ancient earthworks would have served a similar purpose to their European Neolithic counterparts—as ritual and public gathering sites. So far, 450 earthworks have been discovered.

The discovery challenges the idea of the Western Amazon as a “pristine ecosystem.” Researchers now believe the indigenous populations practiced forest management long before the arrival of Europeans and their destructive land-use practices. With 6,000 years of reconstructed vegetation and fire history for the site, researchers believe the geoglyphs suggest “the ingenuity of past subsistence regimes did not lead to forest degradation.” They point to “the importance of indigenous knowledge for finding more sustainable land-use alternatives.”[2] 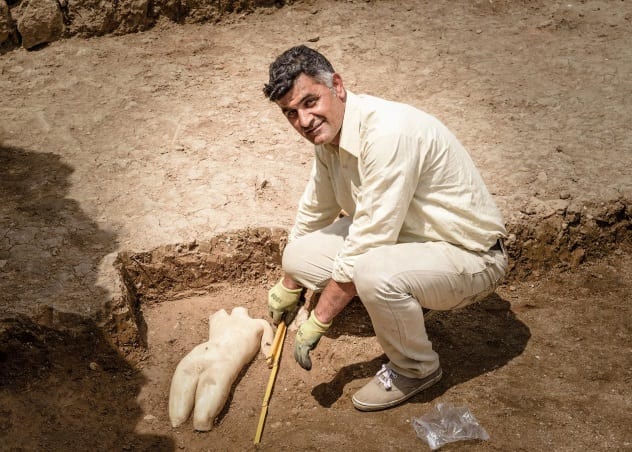 Declassified spy satellite photos from the 1960s offered the first tantalizing glimpse of Qalataga Darband. But in 1996, the ancient city remained inaccessible in Saddam Hussein–controlled Iraqi Kurdistan. However, in 2017, improved security allowed a team of Iraqi and British archaeologists to confirm the location of the lost city of Qalataga Darband, founded in 331 BC by Alexander the Great.

“Drones had been crucial in locating the site,” noted project leader John MacGinnis. “We got coverage of all the site using the drone in the spring—analyzing crop marks hasn’t been done at all in Mesopotamian archaeology.” The presence of subterranean structures—like walls—affect wheat and barley growth, causing color changes. These differences can most easily be identified from above by drones. An abundance of stone presses suggests the fortified settlement thrived on the region’s lucrative wine trade.[3] 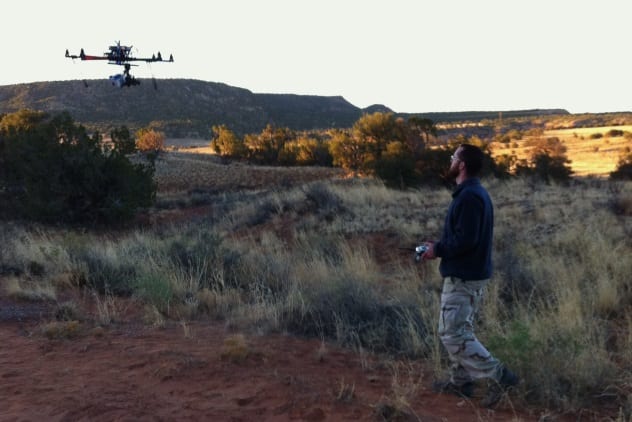 In June 2013, archaeologists used a drone equipped with thermal cameras to examine an ancient Native American settlement in New Mexico. Dated back 1,000 years, the 60 ancestral Puebloan houses of Blue J village were cloaked in vegetation and eroded sandstone. The site was originally identified in the 1970s and only partially explored. The new team found structures earlier investigations had reported as well as previously unidentified ones.[4]

Buried stones retain heat differently than soil. Thermal imaging provides heat maps indicating subterranean structures. Archaeologists have long known that thermal cameras would be essential in finding buried worlds. However, until the recent drone boom, the technology was simply cost-prohibitive. Inside the plaza wall, researchers found a dark circle that may represent a kiva, a circular structure used for rituals and public gatherings. Monumental great houses and subterranean kivas are hallmarks of Chaco-era Puebloan culture. So far, neither has been discovered at Blue J.

6 Hidden In Plain Sight At Petra 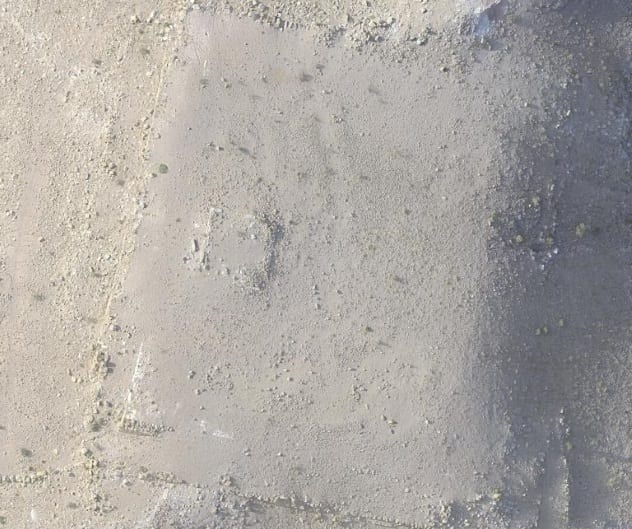 Located in Southern Jordan, Petra is the ancient capital of the Nabataeans. Constructed in the mid–second century BC, the city was mostly abandoned by end of the Byzantine era. Until 2016, archaeologists didn’t know that there was a building roughly as long as an Olympic pool and twice as wide hiding in plain sight. Drone photography revealed the outline of a structure 0.8 kilometers (0.5 mi) from the ancient caravan city, hewn from sandstone.[5]

A large platform measuring 56 meters by 49 meters (184 x 161 ft) encloses a smaller platform that was once paved in flagstones. Columns crowning a massive staircase guarded the eastern edge. The interior platform housed a small structure, 8.5 meters square (28 x 28 ft), which opened to the staircase in the east. No similar structures are known in Petra. Its function remains a mystery. Pottery from the mid–second century BC suggests the building may date to the early period in Petra’s construction. 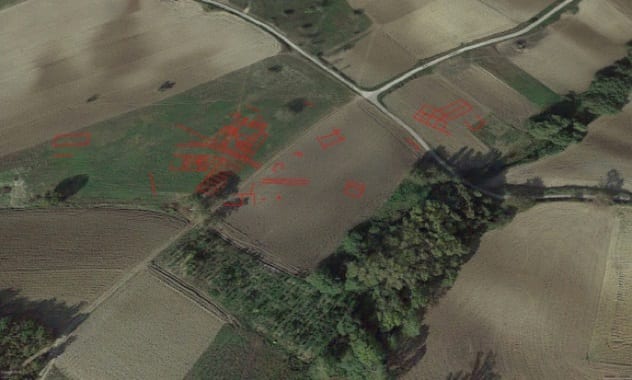 Archaeologists have long known of the ancient Samnites who once occupied Italy’s Apennine Mountains. However, the rugged terrain made excavations and aerial photography nearly impossible, and much of their culture remained a mystery—until recently. In September 2016, researchers reported traces of a Samnite community discovered through the use of drones.

Archaeologists focused their aerial survey on Le Pianelle in Southern Italy’s Tappino Valley. According to Leiden University’s Tesse Stek, “We have a very complete overview of the internal organization of this settlement, including its disposition against the road, storage spaces, domestic areas, and so on.” Researchers were surprised to discover how densely settled and organized the Samnites were.

Previously discovered during construction, Samnite “temples” continue to stump archaeologists. Some theorize these ancient sites were mere road stations and places where goods and information were bartered. Others speculate that they marked the boundary of the Samnite territory.[6] 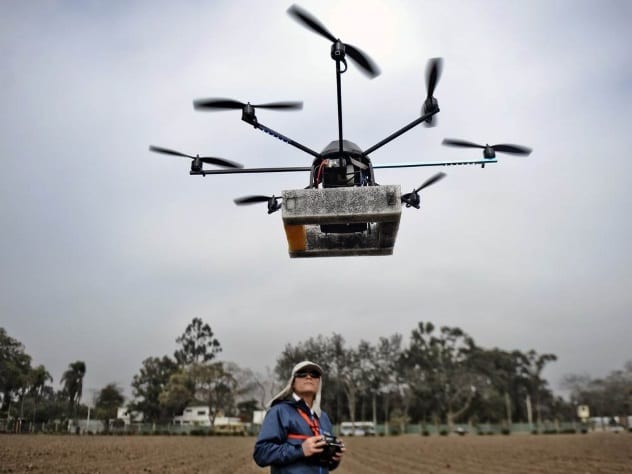 Peru’s vice minister of cultural heritage, Luis Jaime Castillo, believes drones represent a “before and after moment in archaeology.” Castillo is pioneering aerial excavations in his country. He has used drones to map evidence of the 1,300-year-old Moche civilization along the Pacific coast from San Idelfonso to San Jose del Moro.[7] The two-dimensional images provided by drones allow researchers to construct highly detailed three-dimensional models. Castillo notes, “We can see walls, patios, the fabric of the city.”

The use of drones to map these vanishing remains is critical. These sites are “threatened on every side.” Castillo uses drones not only to map but also monitor and guard his sites. Drone surveillance can detect new looting pits and other disturbances. Land traffickers and squatters are a constant danger. Fraud and political corruption are rife in an era with escalating real estate values—particularly around Lima and Cuzco.

3 Secrets Of The Shakers 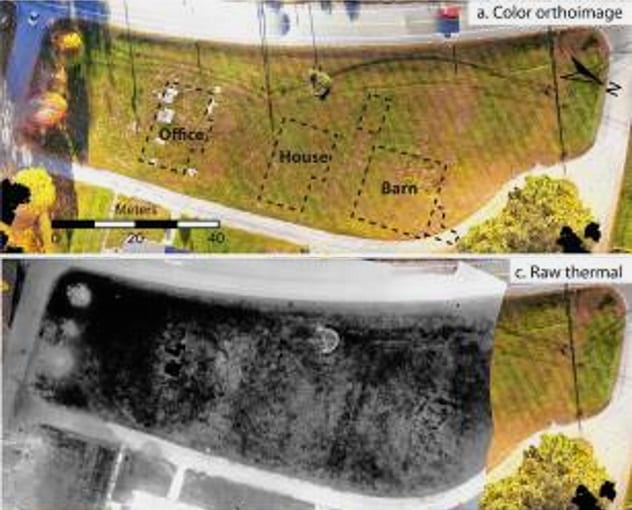 “It feels like cheating a little,” noted Dartmouth’s Jesse Casana. The archaeology professor has been using drones to reveal the secrets of a Shaker village in Enfield, New Hampshire. The Shakers were an extreme Protestant sect with a lifestyle based on celibacy and communal living. Their name derives from the “shaking” that accompanied expressions of ecstasy that would occasionally overwhelm believers.

Casana first experimented with drones in 2012. However, advancements and increased popularity in recent years have made the equipment “way better, more reliable, cheaper, and easy to fly.” Despite being combed over by Dartmouth students, the Shaker village at Enfield has many secrets waiting to be revealed. The location of the settlement’s buildings had been unknown—until the drone era. “Now we can see the foundations of buildings, along with other features like old historic pathways and roadways through the village, and a couple of underground water pipes.”[8]

2 Castle Of The Sealand Kings 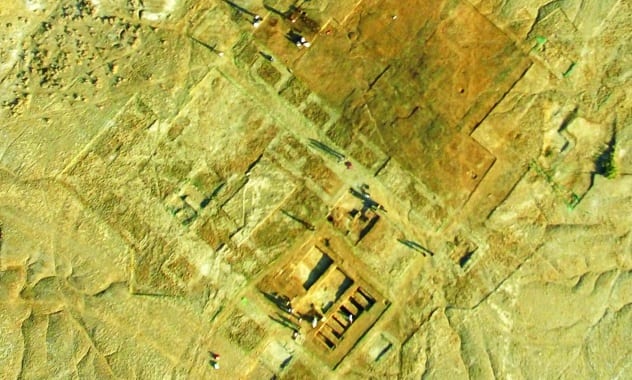 In March 2017, a British-Iraqi team of archaeologists discovered the ancient city of Tell Khaiber using drones. Until recently, the Sealand Kings, who ruled large territories of Bronze Age Iraq between 1730 and 1460 BC, were known only through scant written records composed by other rulers. Despite these enigmatic rulers’ domination over the swampy head of the Persian Gulf, researchers have never found archaeological evidence of them on the ground—until now.[9]

Tell Khaiber remains virtually undetectable from the ground. Centuries of sediment have left the settlement little more than a “imperceptible bulge” in flat, brown mud. However, drone photographs revealed the outline of the ancient settlements as well as a massive, mysterious structure at its core. A defensive wall ringed with close-set watchtowers enclosed the over 4,400-square-meter (47,000 ft2) structure. Tell Khaiber does not fit the model of a temple, barracks, or palace. Its purpose remains a mystery. 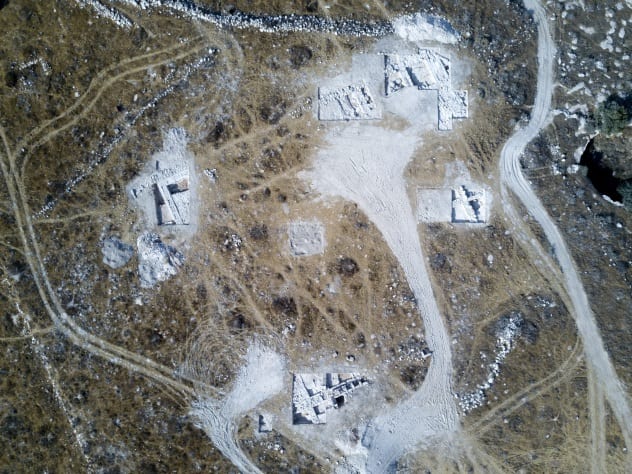 In November 2017, researchers discovered a mysterious structure in the Negev desert of Southern Israel using drones. Located in a former military training zone, the structure dates back 2,200 years to the Hellenistic period. Excavations uncovered walls, enclosed rooms, and underground baths. Many of the artifacts within bear images of bulls—a sacred symbol to the Idumean civilization.[10]

“If this was indeed an Idumean palace or temple, it would be a rare and exciting find. Similar structures in this country can be counted on the fingers of one hand,” noted the excavation codirectors. The Idumeans were a Semitic people from Southern Jordan who settled in the Shephelah foothills. When the Hasmoneans conquered this territory in 112 BC, the Idumeans were assimilated into the Judean population. Curiously, there is evidence of fire and intentional dismantling of the structure. Experts hypothesize it might have occurred during the Hasmonean conquest of the region.

A leading authority on occult music, Geordie McElroy collects spell songs and incantations for the Smithsonian and private collectors. Dubbed the “Indiana Jones of ethnomusicology” by TimeOutLA, he is also front man of Blackwater Jukeboxe.