Dessert is either the reason you ate your meal in the first place or an afterthought when you convince yourself that you have just enough room left for a fun and tasty indulgence. Desserts rarely cost what we pay for our meals and almost never require a bank loan to get. That hasn’t kept some of the world’s more creative patissiers from setting the bar a little higher.

Whether it’s to raise money for a good cause or simply for promotional purposes, some restaurants and their chefs have gone out of their way to create delicious but unaffordable dishes. Were you so inclined and had the means to do so, you could partake in any of these 10 most expensive desserts from around the world. 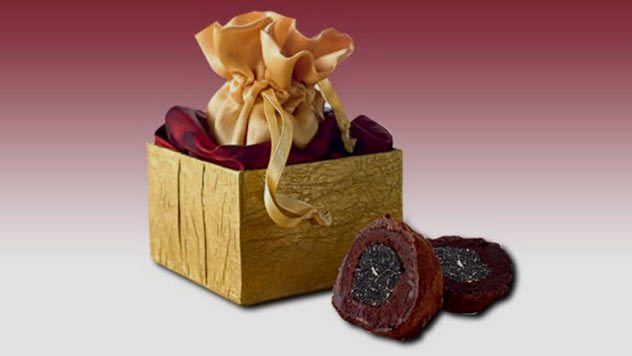 Chocolate truffles aren’t normally cheap, but there are some you can pick up for a lot less than La Madeline au Truffle from Knipschildt Chocolatier in Norwalk, Connecticut. A single truffle will cost $250, or you could go ahead and splurge for 0.45 kilograms (1 lb) at a cost of $2,600.

The company describes the truffle like this: “La Madeline au Truffe starts with a decadent 70 percent Valrhona dark chocolate, heavy cream, sugar, truffle oil, and vanilla as the base for the rich decadent ganache.”[1]

The dessert begins with a rare French Perigord truffle, which is surrounded by a rich ganache. It looks and sounds delicious, but much of the experience in eating one comes from the packaging.

They have created an ornate golden box for each truffle, but you can’t just walk in and purchase one. These are specially made to order, so you need to call ahead if you want to drop a car payment on a single truffle. David’s “Beyond Gourmet” Jelly Beans were created by David Klein, the man behind Jelly Belly Jelly Beans. But unlike his run-of-the-mill candies that are seen all over the place, these are a bit different.

The gourmet variety isn’t encumbered with any of those pesky artificial flavors or colors—they are all natural! Granted, that’s not enough to up the price tag to $500 a jar. There’s something else going on here. Although the dozen flavors are all meant to be savored when eaten, it’s the jar that really gets you on the price.

The original launch of the candies had each bean coated in 24-karat gold leaf inside a beautifully ornate crystal jar.[2] Fortunately, purchasing these candies has become somewhat more accessible to those of us who don’t want to drop $500 on the special packaging. It is possible to purchase a small sampler package without all that fancy gold or crystal nonsense . . . and it’s only $16!

THE MOST EXPENSIVE DESSERT: The $1000 Golden Opulence // Serendipity 3

On the 50th anniversary of Serendipity 3, a restaurant in New York City, the owner wanted to do something special. So they created the Golden Opulence Sundae. Unlike almost any sundae you would find elsewhere, this one requires 48 hours notice before ordering and costs a whopping $1,000, making it the Guinness Book of World Records’ most expensive sundae when it debuted. Despite the high price tag, the restaurant sells one per month, and by all accounts, it’s delicious!

The 48-hour notice is required so they can order the various ingredients from different locations around the world. The ingredients consist of chocolate truffles and three scoops of Tahitian vanilla bean ice cream covered in 23-karat edible gold leaf. It even comes with some Grand Passion Caviar. The whole thing is topped off with gilded sugar and flakes of gold.

When you’re done eating, you even get to keep the $350 Baccarat Harcourt crystal goblet in which it was served.[3]

If ice cream isn’t your thing and you still have $1,000 you want to transfer into something edible, the Golden Phoenix Cupcake may be for you! This salute to gold in the form of a cupcake can only be found in a lovely little bakery called Bloomsbury’s in the Dubai Mall.[4]

The dessert consists of strawberries dipped in gold, Italian chocolate, and Ugandan vanilla beans. The icing that frosts the cupcakes is covered in edible gold dust, and when it’s all said and done, the whole thing is dusted in gold.

Sadly, they don’t let you keep the spoon. But given the amount of gold eaten with this cupcake (thanks to the 23-karat edible gold sheets enveloping it), you probably aren’t missing too much. 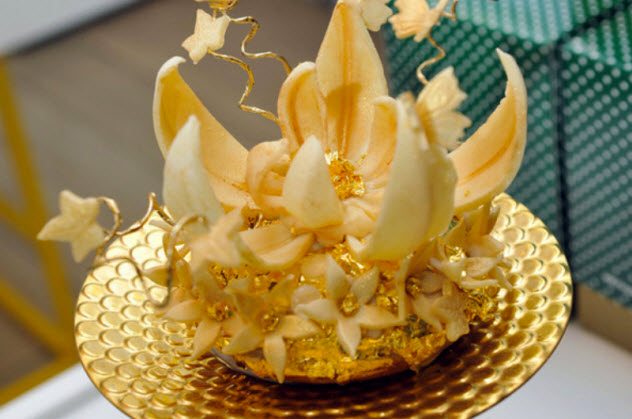 Krispy Kreme is well-known for being able to churn out thousands of doughnuts every day in their stores, but that doesn’t mean they can’t be fancy when they want to! Back in 2014, Krispy Kreme debuted what it called the “most expensive” doughnut in the world. It’s plain to see that this treat doesn’t come cheap—it is adorned with 24-karat gold leaf among other things.

The doughnut is also decorated with a gilded white chocolate lotus with a few edible diamonds and stuffed with Dom Perignon champagne jelly. According to Maxim, the doughnut was served with “a cocktail featuring raspberry and passion fruit syrup, Courvoisier Cognac, and more Dom Perignon 2002.”[5]

Unfortunately, these aren’t sitting in the display case of your local Krispy Kreme seeing as it was only created once. The company made the fashionably fancy doughnut in an effort to raise money for The Children’s Trust. 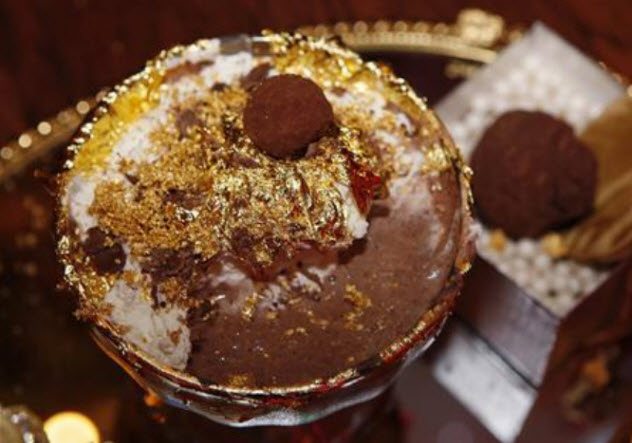 The Golden Opulence Sundae didn’t hold the top spot in the Guinness Book of World Records for long thanks to the delectable yet wholly unaffordable creation from the folks at Serendipity 3, who simply had to best themselves. The cost of the Frrrozen Haute Chocolate Ice Cream Sundae will set you back a new car: $25,000.

The dessert is far more than just simple ice cream—5 grams (0.2 oz) of 23-karat edible gold are mixed into the dish. To top it all off, they don’t bother with the standard maraschino cherry and instead opt for La Madeline au Truffle, which we already know goes for $250 on its own.

The dish is served in a goblet with a gold crown, an 18-karat gold bracelet with 1 carat of white diamonds, and a golden spoon. These beauties aren’t exactly on the menu and have to be ordered in advance.[6]

The truffle is brought in from France, while the cocoas are from multiple places around the world. The gold is flown in from Switzerland, so there is some time needed to get it all put together. But for someone willing to shell out $25,000 for dessert, it may be prudent to wait for the right ingredients. 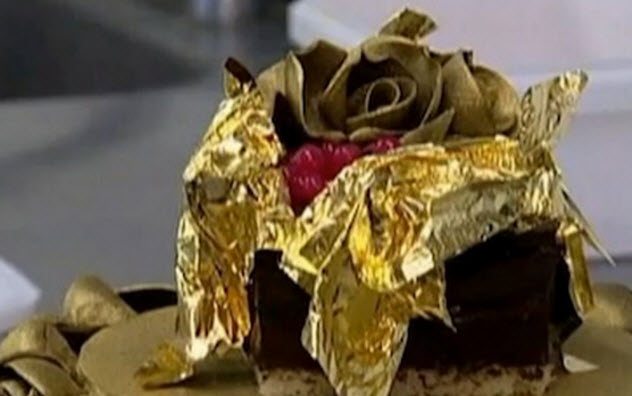 Most people who want pudding will get a six-pack at their local grocery store and maybe put $0.50 toward one dessert. Then there are those whose expense accounts have gone the way of sanity. They put forth $35,000 toward the most expensive pudding in the world.

It was created by chef Marc Guibert of the Lindeth Howe Country House Hotel in England for the sole purpose of being the most expensive chocolate pudding. The dessert’s design aims to replicate a Faberge egg, which it does thanks to a few additions to the normal recipe.

Besides some of the most delicious chocolates, caviar, and edible gold the chef could find, the dessert also comes with a 2-carat diamond. (You probably wouldn’t want to eat that.)

The edible bits consist of gold and champagne caviar, four different flavored Belgian chocolates, and, of course, a covering of edible gold leaf. Accompanying the pudding is a bottle of Chateau d’Yquem, which normally costs around $700 on its own. The pudding is made to order and requires three week’s notice (and probably something of a down payment).[7] 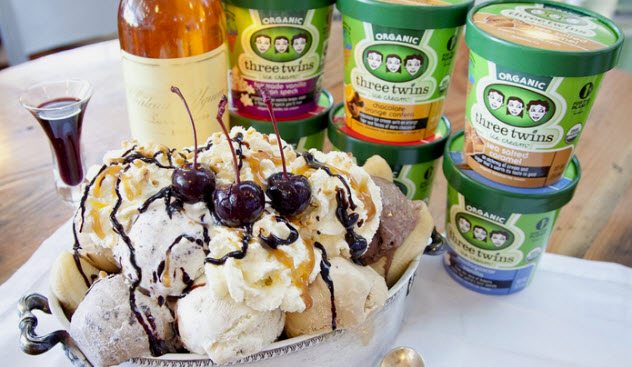 The “World’s More Expensive Most Expensive Ice Cream Sundae” doesn’t by itself cost as much as the previous sundae on this list, but it comes with a bit of a twist. The people behind Three Twins Ice Cream make a banana split, which typically costs $3,333.33. It consists of bananas and syrups made from rare wines, and it is served with a special ice cream spoon made in the 1850s. They will even get a cellist to play for you while you eat if you give them a day’s notice.

The reason that this Absurdity Sundae is No. 3 on our list has to do with the special arrangements made if you want to enjoy it “properly.” For just $60,000, they will fly you out to Mount Kilimanjaro where the company’s founder will hand-churn ice cream using glacial ice harvested from the mountain’s summit.

Of course, your airfare to Tanzania will be first class and you will be put up in five-star accommodations. You can even kick in an additional $25,000 if you want to bring a friend with you.[8] 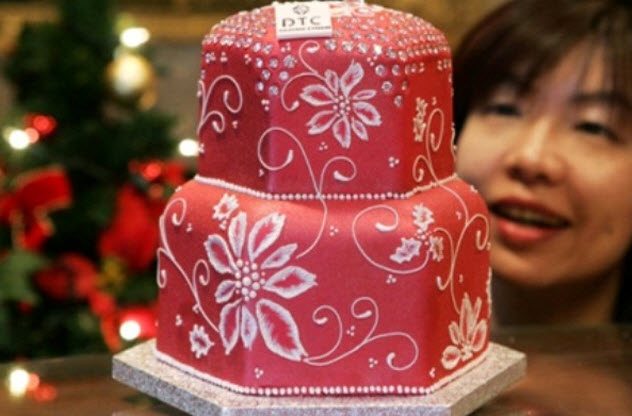 Every Christmas, it seems that you can’t walk into a store without seeing a fruitcake. These desserts, which few people seem to truly enjoy, are ubiquitous during the holiday season. But they don’t often cost more than a few bucks.

Then there’s the special cake created for Takashimaya Department Store in Tokyo. This fruitcake is valued at a measly $1.72 million thanks to the 223 individual diamonds studding the cake. The total weight of the diamonds is 170 carats, making this the most expensive fruitcake in the world . . . and it probably still doesn’t taste all that good when you bite into it.[9]

The Diamond Fruitcake took six months to design and an entire month to create. The cake is edible, but the chef has suggested that the diamonds aren’t for consumption. Despite the chef’s warning, it doesn’t look like anyone will be taking a bite because the cake was created as an art piece for the store’s promotion. Still, who wouldn’t want to try a cake that costs as much as your average mansion? If you’ve ever weighed the decision to purchase a yacht or a plate of strawberries and went with the latter, you only have to drop a measly $9.85 million at Arnaud’s Restaurant in New Orleans for a tasty treat! The French Creole restaurant has been serving strawberries for years. Fortunately, you can pick up their regular strawberry dessert for around $9. But for Valentine’s Day 2016, Arnaud’s decided to try something special.

Although the dish comes with locally grown strawberries, some additional ingredients account for the hefty price tag. Various expensive liquors and champagnes are added for flavoring along with a scoop of vanilla ice cream, whipped cream, and 24-karat gold flakes atop the dessert.

Still not satisfied with the price tag? Thrown in at the base of the plate in an ornate box is a 10.06-carat royal blue diamond engagement ring from MS Rau Antiques in the French Quarter.[10]

Jonathan is a graphic artist, illustrator, and writer. He is a retired soldier and enjoys researching and writing about history, science, theology, and many other subjects.