Rain, snow, sleet, and hail are common forms of precipitation. The type you’re accustomed to, and how often you see it, varies based on the climate you live in. But regardless of form, the precipitation we encounter here on Earth is made up of water.

Other planets, and moons, also experience varied forms of precipitation. Rainstorms and snowfalls that occur elsewhere in the universe are comprised of different elements than what we experience on Earth. This results in some very interesting phenomena, from ruby showers to gasoline downpours. 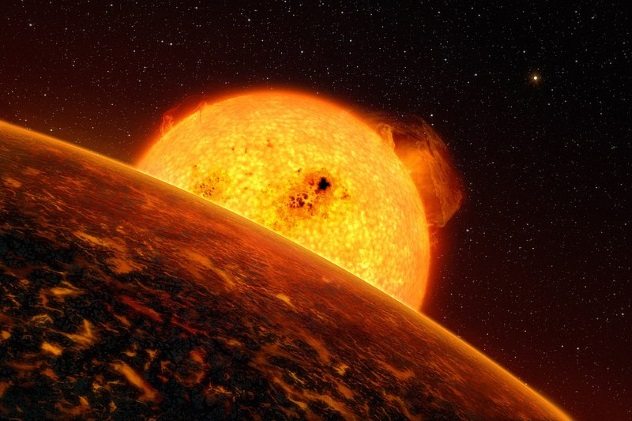 Because of COROT-7b’s proximity to its sun, the rocky planet is gravitationally locked, with the same side always facing its parent star. The sun-facing side of the planet experiences temperatures of approximately 2,327 degrees Celsius (4,220 °F). The sweltering conditions are capable of melting and vaporizing rock, which creates the planet’s unique form of precipitation.

COROT-7b is covered in oceans and lakes of lava. The molten rock vaporizes and rises into the atmosphere, where it condenses to form rock clouds. The rock clouds rain tiny, hot pebbles back into the lava oceans. The cycle then repeats itself, similar to the water cycle on Earth.[1] 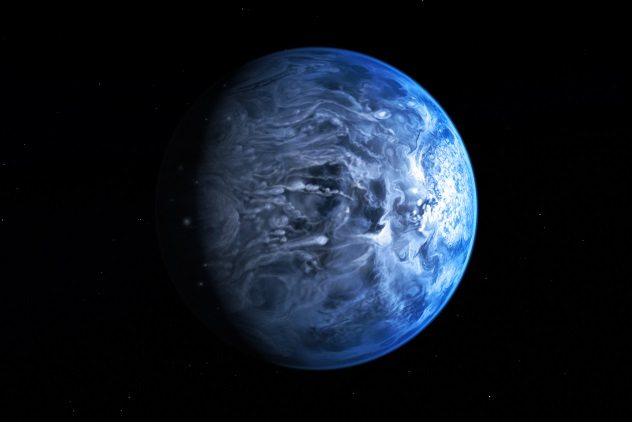 An exoplanet called HD 189733b was spotted by the Hubble Space Telescope in 2005. The blue giant falls into a category of exoplanets known as “hot Jupiters.” Hot Jupiters are large, gaseous planets that orbit their sun very closely, which results in extremely hot surface temperatures. HD 189733b experiences daytime temperatures of up to 930 degrees Celsius (1,700 °F).[2] For comparison, the average temperature on Jupiter is minus 148 degrees Celsius (–234 °F).

HD 189733b is located 63 light-years from Earth. Like Earth, the planet appears blue from afar, but that is where the similarities end. HD 189733b gets its color from the fierce glass rain that whips around the planet. Wind speeds on HD 189733b reach up to seven times the speed of sound, traveling 8,700 kilometers per hour (5,400 mph). HD 189733b’s atmosphere contains clouds that are laced with silicate particles. When these high clouds release the silicate particles, the extreme heat ensures that the glass is molten, and the harsh winds cause the rain to fall sideways. 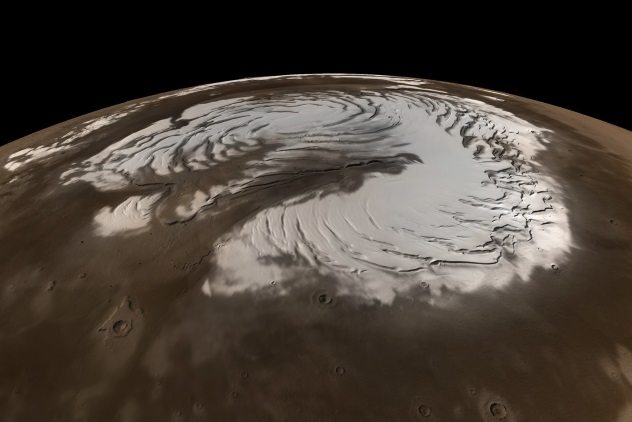 Mars has some serious snowstorms that occur during the middle of the night.

Our neighboring planet has clouds of water and ice that are extremely low, merely 1 or 2 kilometers (0.6–1.2 mi) above the surface of the planet. It was previously believed that precipitation from these clouds would drift lazily toward the planet’s surface, taking hours or days to reach the ground. Information gathered by the Mars Global Surveyor and the Mars Reconnaissance Orbiter proved otherwise. Martian snowfall can reach the surface of the planet in less than ten minutes.

The temperature drops considerably when the Sun sets on Mars, and vigorous winds create a blizzard-like snowstorm. These nighttime storms are referred to as “ice microbursts” and are comparable to small, localized storms that occur on Earth.

Some of the snowstorms on Mars are made of dry ice, specifically those near its south pole. Clouds form from frozen carbon dioxide. Flakes from these clouds fall thickly enough to accumulate, contributing to the carbon dioxide ice cap that covers the planet’s south pole.[3] 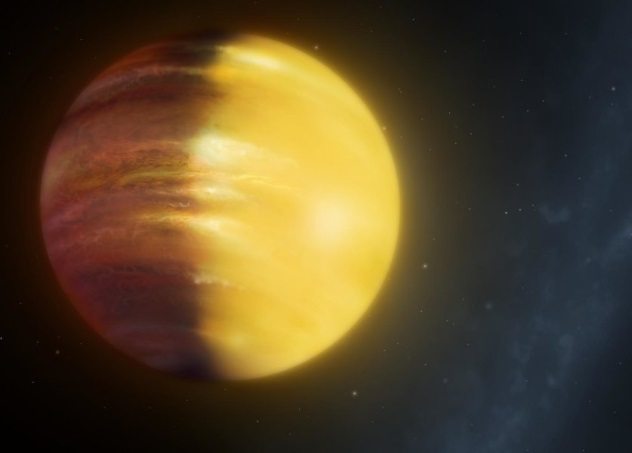 HAT-P-7b is an exoplanet located 1,000 light-years from Earth. The planet is 40 percent larger than Jupiter and orbits a star twice as large as our Sun. HAT-P-7b is very close to its massive star and tidally locked. The sun-facing side of the planet experiences average temperatures of 2,586 degrees Celsius (4,687°F). The dark side of HAT-P-7b is drastically cooler, and the difference in temperature between the two sides creates intense winds that circle the planet.

Clouds form on the cooler dark side of HAT-P-7b. Strong gusts blow the clouds over to the sun-facing side, although these clouds do not last long on the dayside of the planet before vaporizing in the extreme heat.

HAT-P-7b’s clouds are beautiful. They contain corundum, the mineral that produces sapphires and rubies on Earth. Rain from corundum clouds is undoubtedly dazzling as well, but astronomers must learn more about HAT-P-7b’s atmosphere in order to determine how corundum precipitation appears when reacting with other chemical compounds on its way to the planet’s surface.[4] 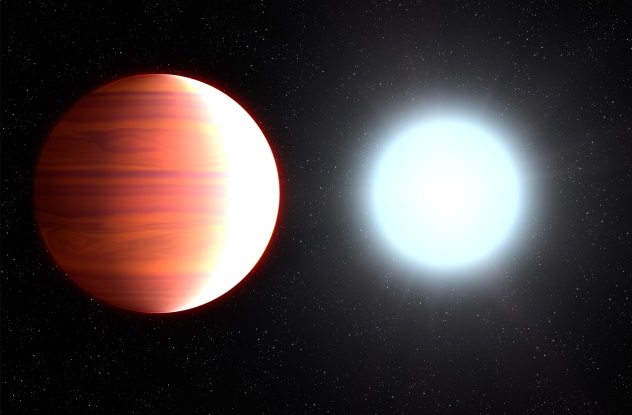 Kepler-13Ab is an incredibly hot planet located 1,730 light-years from Earth. The exoplanet snows titanium dioxide, an active ingredient in sunscreen. Ironically, the sunscreen snow only occurs on the dark side of the planet.

Kepler-13Ab is another hot Jupiter, closely orbiting its host star and tidally locked. Temperatures on the dayside of the planet reach 2,760 degrees Celsius (5,000 °F), making Kepler-13Ab one of the hottest known exoplanets.

Most Hot Jupiters radiate heat, making their upper atmosphere warmer than their lower atmosphere. Kepler-13Ab is unique in being the only hot Jupiter where the opposite is true. This is because the dayside of the planet lacks titanium oxide, the compound responsible for absorbing and radiating heat on other hot Jupiters.

Scientists discovered that titanium oxide only exists on the dark side of the planet. It is believed that strong winds brought the compound from the dayside to the nightside, where it cooled and condensed into clouds. The clouds release titanium snow, which is pulled into the lower atmosphere by Kepler-13Ab’s strong surface gravity.[5] 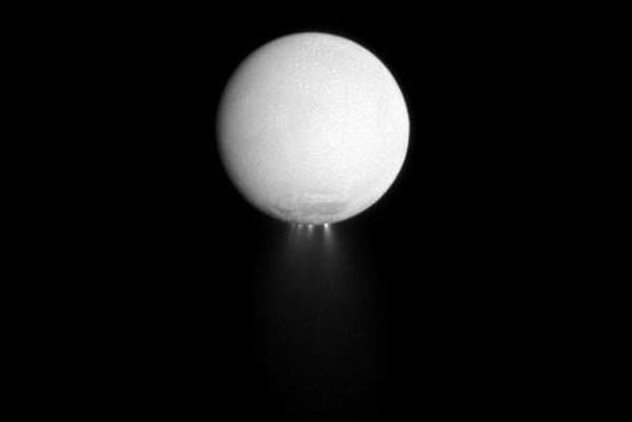 Enceladus, Saturn’s sixth-largest moon, created a 14-year mystery for scientists. The existence of water vapor was discovered in Saturn’s upper atmosphere, but it was unknown where it came from. The European Space Agency’s Herschel Space Observatory, the largest infrared space telescope ever launched, provided the answer in 2011.

Geysers are located on the southern pole of Enceladus. The geysers regularly erupt with icy water, sending approximately 250 kilograms (550 lb) into space every second. Much of it falls back onto the moon’s surface. Some is lost in space, some hits Saturn’s rings, and a bit makes it to the planet’s atmosphere.

Enceladus rains three to five percent of its water into Saturn’s atmosphere. This creates a water vapor ring around Saturn that the moon constantly replenishes during orbit.

Enceladus is the only moon in our solar system that influences the chemistry of its parent planet. The water that Enceladus introduces to Saturn’s atmosphere creates other compounds containing oxygen, such as carbon dioxide, and ultimately descends deeper into the planet, where it forms small clouds.[6] 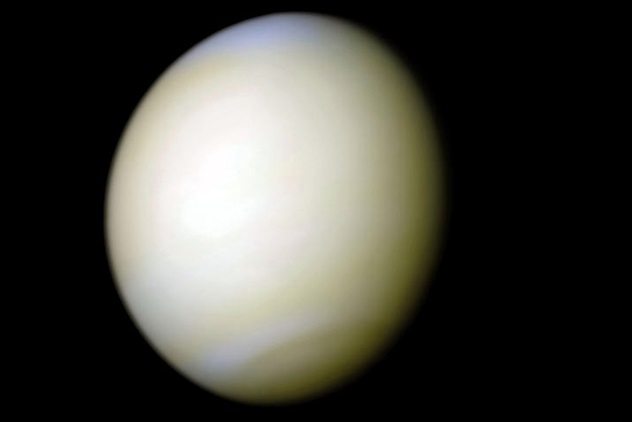 It was once thought that metal snowed on Venus. The planet’s mountains are covered by what appears to be a layer of frozen snow, though, of course, the scorching temperatures on Venus would never permit that. A closer look at the mountain caps revealed they were made of galena and bismuthinite, two types of metal. But the metal does not form these caps by falling from above. Venus has valleys where the metals vaporize and become a mist. The mist rises and settles on the tips of mountains, where it condenses. The metallic frost is formed by a rising fog, rather than a falling snow.

But Venus does experience a unique form of precipitation. Rainstorms of sulfuric acid occur regularly. 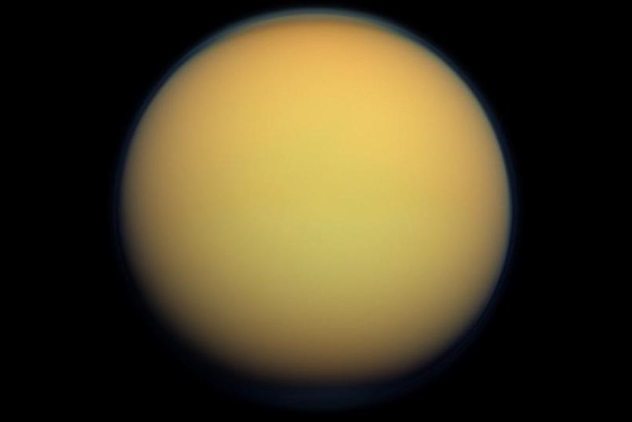 Titan, Saturn’s largest moon, is the only other place in our solar system besides Earth where liquid rains onto a solid surface. But on Titan, rain falls in the form of liquid methane.

The surface of Titan contains lakes and seas of natural gas. Hydrocarbon clouds provide the contents of the lakes and seas in the form of downpours that release large amounts of methane rain in very short periods of time. Titan’s rainfall is scattered in intensity, so some areas of the moon experience erosion and new lake formations, while other areas simply gain a few new dunes.

Titan’s monsoon storms are extreme but only occur once per Titan year. A Titan year is equivalent to about 30 Earth years, so it’s safe to say the moon has some dry spells.[8] When it does rain on Titan, the amount of liquid methane that falls at one time is comparable to the amount of water that Hurricane Harvey dumped on Houston in 2017. 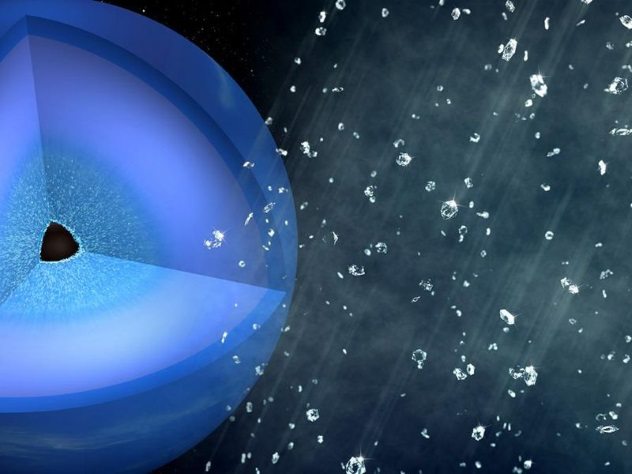 Neptune and Uranus may have the richest rain of all. Their unique precipitation occurs approximately 10,000 kilometers (6,200 mi) below the surface. It is here that showers of diamonds rain down toward the cores of these ice giants, forming diamond icebergs that float on oceans of liquid carbon.

Scientists recreated the effect in a lab on Earth. In place of the compounds formed from methane that exist on Neptune and Uranus, researchers substituted polystyrene, a suitable chemical alternative. An instrument called Matter in Extreme Conditions was used to simulate the intense heat and pressure that causes carbons deep inside these planets to form diamonds. When the instrument generated temperatures near 4,727 degrees Celsius (8,540 °F) and pressures that mimicked those believed to exist below the surface of Neptune and Uranus, tiny diamonds formed.

The diamonds were only a few nanometers wide because the conditions created in the lab only lasted for a very short period of time. The diamonds that form and then accumulate near the cores of Neptune and Uranus, where the conditions are continuous, would be much larger—up to millions of carats in weight.[9]

Even the Sun experiences precipitation in the form of plasma rain.

NASA’s Interface Region Imaging Spectrograph, or IRIS, is a solar satellite that observes the behavior of our Sun. IRIS has been able to capture images of solar flares and the ensuing phenomenon known as post-flare loops or coronal rain since 2013.

A solar flare is a powerful explosion of radiation. A large amount of magnetic energy is released, which heats the Sun’s atmosphere and propels energized particles into space. The solar material showers back onto the Sun’s surface as plasma, a gas containing separated positive and negative ions that is steered by complex magnetic forces.

Interestingly, the plasma rain rapidly cools as it approaches the Sun’s surface. The Sun’s outer atmosphere, the corona, is much hotter than its surface. Scientists are still trying to figure out the exact reason for this.[10]