These slightly xenophobic stereotypes about the French are widespread wherever English is spoken. And with good reason. France is a terrible country that looks down its nose at the rest of the planet while making a noise like “haw hee haw hee haw.”

Despite this horribleness, we found 10 fascinating facts about the country to delight and amaze you.

10 They Are Not Cheese-Eating Surrender Monkeys 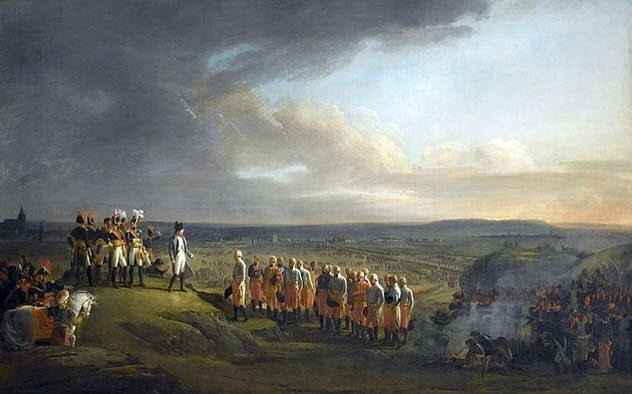 The French military actually has the best military record in Europe.[1] Out of 168 battles fought since 387 BC, they have won 109, lost 49, and drawn 10. About the allegations of cowardice, almost all jokes on the topic refer to World War II. More on that in a moment.

In the Great War (aka World War I), France lost 1.4 million people (with 4.3 million wounded) against 126,000 (with 234,300 wounded) for the US. Yet, we do not mock the Americans for being Johnny-come-latelies. Romania and Serbia lost, respectively, three and four times more men in World War I than the US.

While it is true that the French surrender came swiftly after the start of World War II, we must consider the following. Only the US and the USSR could have stood alone against the Wehrmacht in 1939—and casualties would have been huge. After the betrayal of Poland by the British, the Germans had a free hand—and the French took the punch like manly men.

9 The Most Popular Tourist Destination On Earth 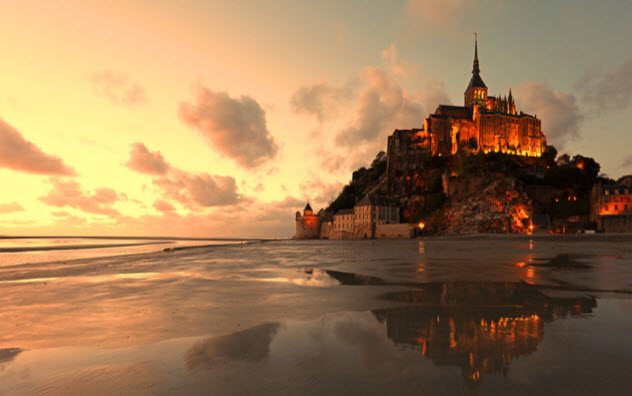 Despite a slight decline in numbers, France still tops the pile when it comes to tourism. Surprisingly, for a nation with such a romantic image on other continents, 70 percent of tourism is European. This is indicative of the high regard in which the nation is held by her neighbors. Beyond the obvious—Paris, Mont Saint-Michel, Chateau de Chambord, and Carcassonne—France surprises consistently.[2]

While there are the less attractive sights as in every nation—the motorways in France are hellish—France can spin you around and take you on epic adventures like few other nations. It’s not just the wine and cognac. It’s the feeling among other nations that some things the French do better than the rest us. And we want a piece for ourselves. 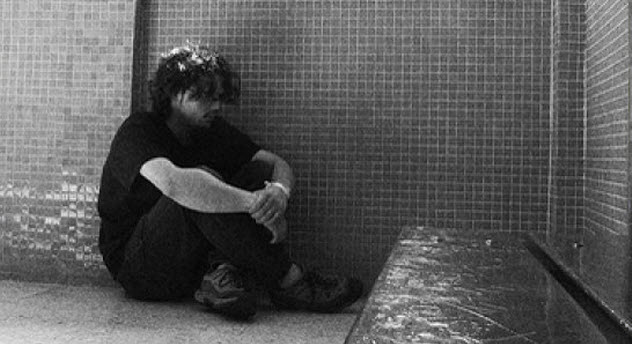 Something the French categorically are doing better than everyone is failing to get out of bed—because what’s the point? Some wags have suggested that the reason that one in five Frenchmen has had a medically diagnosed depressive episode is too much vin (“wine”) and boursin (creamy white cheese) and not enough cocaine.

It is unlikely that the French are depressed due to a lack of interest in recreational drugs alone.[3] The high levels of medicated people have been ascribed to developed nations having a better grasp of mental health issues. Westerners, in general, are more likely to talk about depression. The medical culture in France and other European nations is disposed to medication as a treatment.

We think it could be due to Frenchmen only having Ligue 1 soccer. It’s really awful, even with PSG (Paris Saint-Germain Football Club) and their billions of euros. Sacre bleu.

7 The Potato Was Banned In France For 24 Years 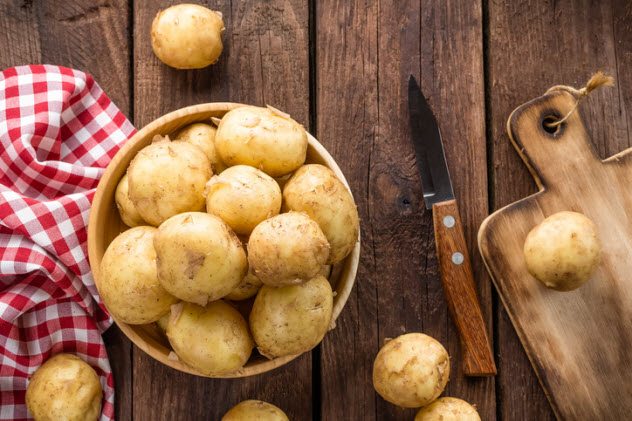 Miraculously, no wars began over the French and their refusal to invent french fries at their earliest possible convenience. Around 40 years passed between the introduction of the potato and the revolutionary decision to fry those bad boys in oil.

Well, partly the French did not consider the potato to be food at all. For some reason, our Gallic chums thought the humble potato aided the transmission of leprosy. As we all know now, the real culprit was witchcraft and early feminism.

One heroic Gaul, Antoine-Augustin Parmentier, fought for years to have his beloved tubers recognized as food.[4] Eventually, in 1772, with the patronage of Louis XVI, the potato was declared okay to boil, mash, stick in a stew, or even be made into lovely, big, golden chips.

6 Hilariously, France Once Had A National Flag That Was White 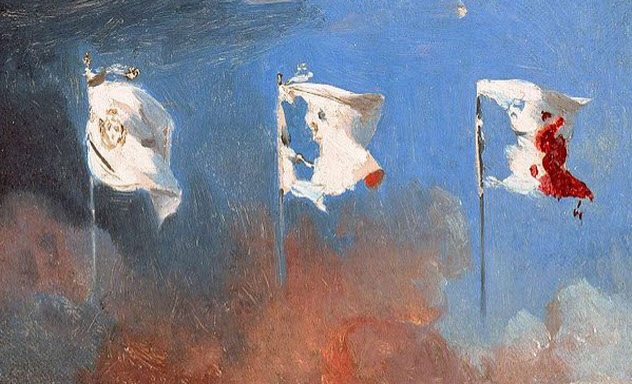 After the aforementioned Louis XVI lost his head in the most literal fashion, the actually not-short-for-his-time Napoleon took power. As we all know from history, Napoleon was good at war but bad at invading Russia in winter. Eventually, he was given the boot, and so began the Bourbon Restoration.[5]

Flying the white flag might not have been the wisest choice of standard, seeing as it had 2,000 years of usage as a symbol of giving up. And so it proved.

The Bourbon Restoration lasted a whole 16 years with their wild ideas of having a king. Then they waved their own standard in a predictable manner in the face of the revolution. Incidentally, this is the period covered by Victor Hugo in Les Miserables.

5 The Most Anti-Semitic Place On Earth? 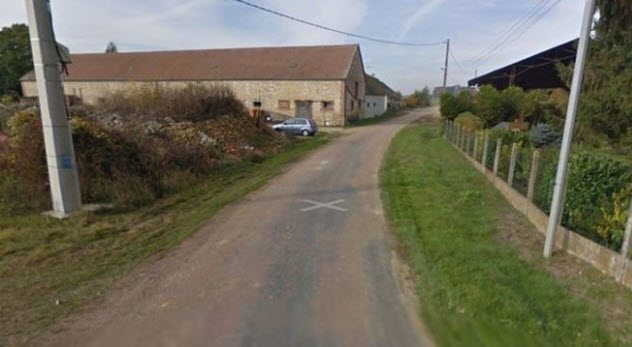 There are lots of places with rude names. In the US, there is a Beaver Bottom. Australia has Intercourse Island. In Iran, you can live in Shit. Not ones to be left out, the French had a town called “Death to Jews.”

La-Mort-Aux-Juifs was a tiny hamlet with a name dating back centuries. As the deputy mayor of Courtemaux put it, “No one has anything against the Jews, of course. It doesn’t surprise me that this is coming up again. Why change a name that goes back to the Middle Ages or even further? We should respect these old names.”

Luckily, we have moved on from the days when peasants believed in the blood libel, and we can happily report that nobody hates anyone for their religion anymore. At one time, the worst-named town in the world was Castrillo Matajudios (“Little Hill Fort of Jew Killers”) in Spain. But the Spanish town changed its name to Mota de Judios (“Hill of the Jews”) in 2015.

Fortunately, the municipal council of La-Mort-Aux-Juifs finally caved to national pressure.[6] In early 2015, the name La-Mort-Aux-Juifs faded into history and the area was divided between the hamlets of Les Croisilles and La Dogetterie.

How charming humans are.

4 The Louvre Was Built To Defeat Vikings 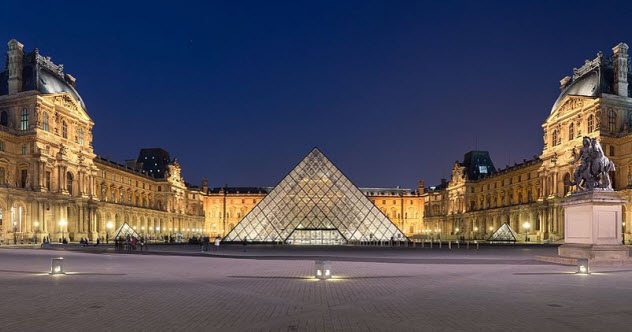 Back in the 12th century, France was beset on all sides by enemies. To the south, the Moors had conquered much of Spain. The Third Crusade was underway in the Holy Land, but the west of France lay under the dominion of Richard the Lionheart of England. To make matters worse, the Vikings, despite converting to Christianity, had not renounced their raiding.

What was King Philip Augustus to do with all his loot?

Simple. Build a giant castle in the middle of Paris. By the time work was finished in 1202, the Louvre housed the records and treasure of the royals for 70 years or more.[7] Though torn down long ago in favor of even bigger castles and, later, a gift shop where you can buy a key ring with a tiny picture of a girl smiling a bit, the Louvre was originally all about fighting.

The site became a base for generations of French kings to go in multiple directions to kill people. Tres bon (“Very good”).

3 Macron Is The Youngest President In History 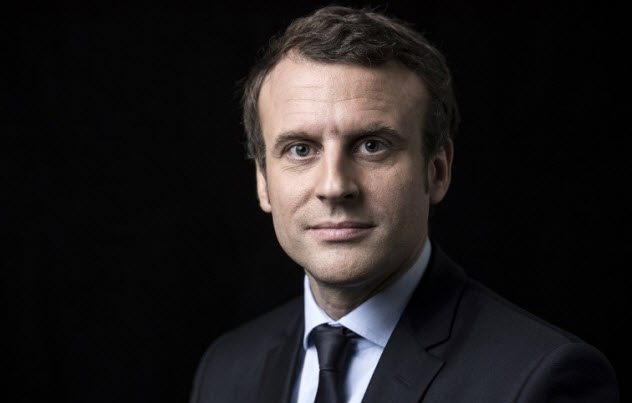 In 2017, Emmanuel Macron, 39, became the youngest president ever to take office in France and the first to be married to his own high school teacher, who is 24 years his senior. While that is considered creepy and weird by some, enlightened fans of Van Halen have declared it super hot.

Macron’s youth provides other barriers to be surmounted. After he criticized PiS, the ruling party of Poland, their Prime Minister Beata Szydlo (who still has it at 54) said: “Perhaps his (Macron’s) arrogant comments result from lack of political experience, which I can understand, but I expect that he will make up for this shortcoming and will be more restrained in the future.”[8]

On the other hand, young Emmanuel has quite a good relationship with the not-past-it-just-yet leader of the Schengen, Mutti Merkel, who is 63. What Macron’s wife thinks of that is hearsay, rumor, and libelous to speculate upon. 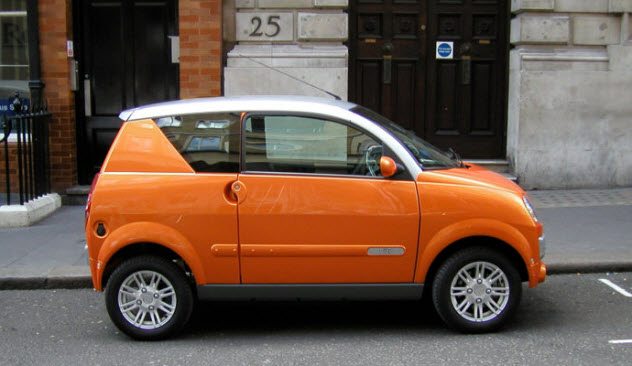 If you are 14 years old in France, you can drive a little car called the VSP (voiture sans permis). Literally, that means “car without a license.” These vehicles top out at 45 kilometers per hour (28 mph) and only have two seats. This means that, unlike in normal countries, the most famous lovers on Earth learn their skills in the front seat.

Historically, these vehicles have been popular with the elderly and the young living in the countryside. Even so, the VSP has a glorious history of bizarreness.[9]

Since the first “carts” hit the market in 1896, intrepid Frenchmen have done what men all over the world have done when faced with a vehicle. They found out how fast the carts could be driven and then set about racing each other and gambling on the results.

Ah, the glory of traditional living.

While the VSP has been an anachronism for decades, the format is experiencing a breath of new life as electric power replaces petrol. With such a light frame—not more than 350 kilograms (770 lb)—the efficiency of electric VSPs is unmatched. Vive la VSP!

1 The Inventors Of Modern Stilt Walking 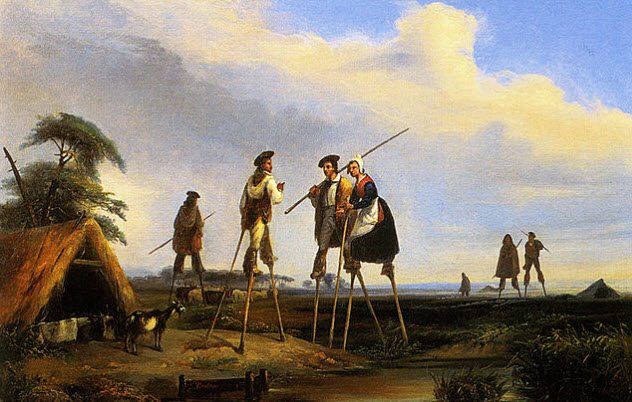 If, like us, you sometimes look at human inventions and think, “Wow, we are a weird species. Who came up with that?” then you, too, will enjoy the humble history of the stilt. Although famous today as an integral part of city performance art and clown shows, the stilt was, in fact, a highly practical invention—one to which no single culture can claim ownership.

The terrain of rural Gascony at the end of the 19th century was rough, to say the least. As Scientific American notes: “There were no roads of any kind, and the population, relying upon sheep-raising for a living, was much scattered. It was evidently to be able to move around under these very peculiar conditions that the shepherds devised and adopted stilts.”[10]

As far back as 1411, records show the Belgians fighting on stilts. The Chinese and ancient Greeks used them, too. However, as far as practical and recent usage in Europe, the French hold the crown for Best People Standing On Wooden Poles In Fields For No Reason.

The use of stilts has almost died out thanks to the encroaching roads and rails of so-called civilized man. The towns might have VSPs and fashion. But in 1891, Sylvain Dornon, a stiltwalker from the Landes region of France, walked from Paris to Moscow in 58 days. Clearly, stilts are best. Huzzah for stilts!

Read about some dark moments in French history on Top 10 Dark Moments In The French Monarchy and 10 Blunderful Moments In French Military History.