Unfortunately, the legal system is set up in such a way where it doesn’t always provide adequate justice when someone commits a crime. Good lawyers and legal loopholes make it possible for criminals to get away with their crimes—if they’re even caught in the first place.

The idea of karma is that a person’s actions, positive or negative, will accumulate and result in what will happen to them in the future. Even if we don’t prescribe to this belief system, most of us would hope that a criminal will somehow end up punished for their crime someday, no matter how long it takes for that to happen. Thankfully, the universe has answered our hopes and wishes because sometimes, it provides incredibly satisfying karma almost instantly.

10 A Punishment That Fits the Crime 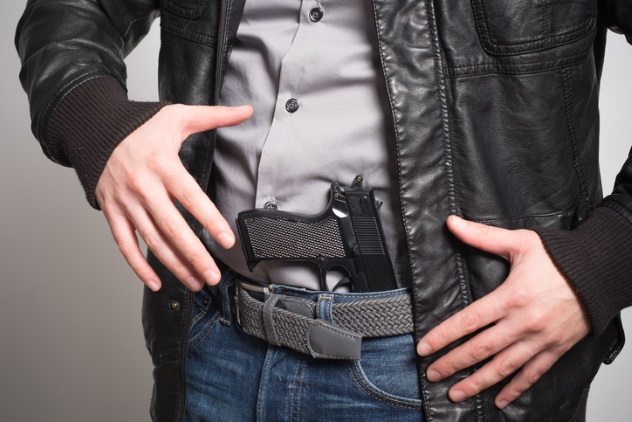 A 19-year-old man named Terrion Pouncy was living in Chicago in 2017 when he decided to rob multiple stores at gunpoint. He approached a hot dog vendor in the city because they usually deal in cash. One of the vendors was holding a bucket of hot grease when Pouncy held a gun to his head, demanding his cell phone, wallet, and all of the money in the cash box.

The hot dog vendor dropped the grease to reach for his wallet. The molten hot liquid spilled over Pounch, and the dollars flew all over the ground. He tried to holster his gun and bend over to pick up the money and accidently shot himself . . . in the penis.[1]

Pouncy survived, but he was held in police custody without bail as he awaited trial for multiple counts of armed robbery. He will definitely go to jail, and considering where he got shot, he should at least win an honorable mention for a Darwin Award, because the likelihood that he will pass on his DNA is now incredibly slim.

In January 2018, two California teenagers attempted to rob a 7-Eleven convenience store with a fake gun. Security camera footage captured the teens wearing hoodies to conceal their identities. The cashier put his hands in the air as they threatened him with the weapon and demanded the money from the cash register.[2]

It turns out that a security guard was sitting in a car in the parking lot, and he was armed with a real gun. Since the guard saw the gun pointing at the cashier, he walked inside and shot the teens in their arms. They told the guard that the gun was fake, to which he replied, “Oh well. Mine is real!”

The 16-year-olds didn’t die. In the video, one of them even asks, “Am a shot?” as if he couldn’t tell. They were brought to the hospital for their injuries. The teens were held without bail for the attempted robbery.

8 A Bad Taste In Your Mouth 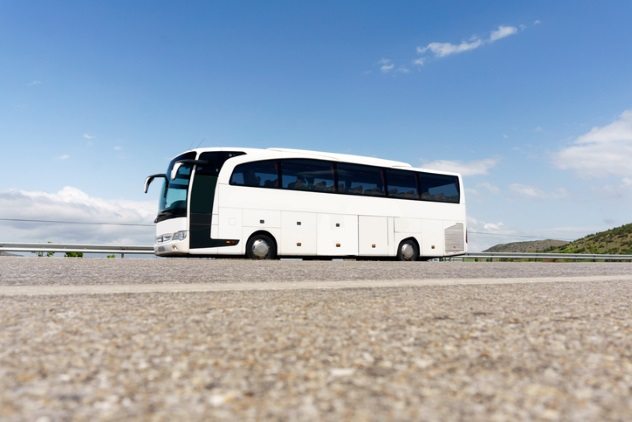 Gas prices have skyrocketed all over the world in the past ten years, but that doesn’t mean most people would resort to stealing. In case you aren’t aware, siphoning gas is a method of taking fuel out of the tank of a car by inserting a plastic hose and sucking on one end until the gasoline begins to pour out. Unless you’re in a post-apocalyptic world, siphoning gas is an awful thing to do, because it often leads travelers stranded with an empty tank of gas.

In 2016, a man in Australia spotted a large tour bus. He knew that these buses had large gas tanks, so he attempted to siphon the fuel. Little did he know that he’d inserted the hose in the sewage tank instead. So, when he sucked, he got a mouthful of human excrement instead. The police were called, but the owners of the bus decided they didn’t want their property back.[3] 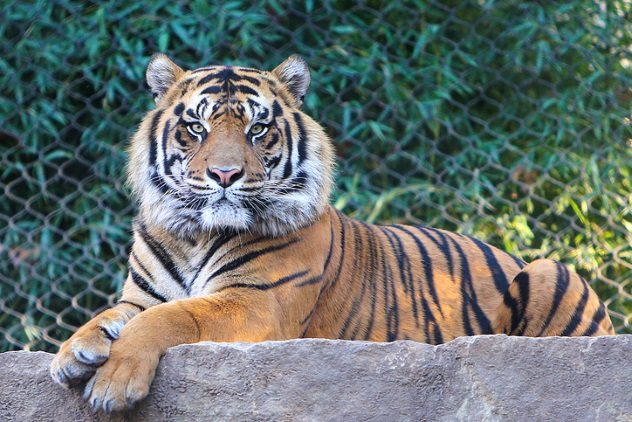 One night in 2005, a South African man robbed a couple who were out on a date. He held a knife to them, demanding that they give him their money. Security guards spotted him committing the armed robbery and started to chase after him. He needed to get away quickly with his loot, so he began running through the city. In the darkness, he climbed a fence and jumped over.

Without realizing it, he had just jumped directly into the tiger’s den of the Bloemfontein Zoo.

The next morning, a visitor at the zoo noticed something strange at the bottom of the tiger’s cage. It was the body of a dead man. Luckily for his family, who needed to bury him, the tiger was well-fed and decided to just kill him without eating his corpse.

Funnily enough, this was not the first time this sort of thing had happened at the Bloemfontein Zoo. In 1997, another criminal jumped the fence to the zoo, but he was apprehended by a gorilla. He tried to shoot the gorilla twice, but it bit him in the buttocks and pinned him up against the wall until the police could arrive.[4]

Drunk Man Runs From Cops, Gets Hit by Own Car

Drunk drivers are incredibly selfish, and they are responsible for a huge number of car accidents every year. In March 2018, a man was driving drunk in Fairfax, Virginia. He was spotted by police, and they put their lights and sirens on to pull him over. The driver panicked and tried to escape. He slowed the car down. Instead of putting it into park, he jumped out of the driver’s seat while the vehicle was still moving. He ran in front of his own car in attempt to flee, and the automobile hit him, knocking him into the ground. He probably goes down in history as the only person who has ever run over himself while drunk driving.[5]

The entire ordeal was captured on a police car’s dash cam. They arrested the drunk, and it turns out that this was the man’s third time being caught while driving under the influence. Since he already had a record, he could face up to ten years in jail, which will give him plenty of time to sober up.

5 Patience Is A Virtue

All of us have probably experienced an impatient driver cutting us off, and they almost never get caught by the authorities for their aggressive behavior. In February 2018, someone was recording their commute with a dash cam as they waited to merge on a highway in Pennsylvania. A line of cars was stopped at a yield sign, with a white SUV in the front of the line. They were waiting for cars to pass before they could safely merge.

One driver in a black vehicle was a couple cars behind in line. He was incredibly impatient, so he began honking for the cars to go, despite the fact that the highway was still full of traffic. The black car drove on the shoulder to cut off several cars and zoomed out onto the highway in front of the white SUV, which was still waiting.

It turns out that the SUV was an undercover police officer.[6] He turned his lights and sirens on and pulled over the aggressive driver immediately. The man who recorded the dash cam video screamed in jubilation, “Instant karma, motherf—er!” 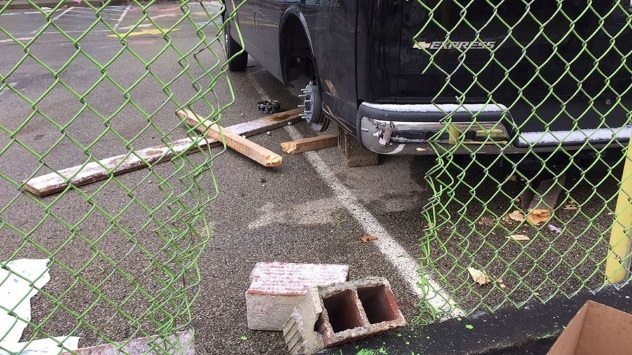 Replacing tires and wheels on a van can be incredibly expensive. Four tires alone cost at least $400, and the wheels themselves can bring the total cost well over $1,000. One December night in 2017, a thief living in Pittsburgh was so desperate for cash that he decided that he wanted to steal the tires and wheels from a Chevrolet Express van.

He jacked up the van with cinder blocks, since he was trying to pull this off in the dark in a parking lot. Unfortunately for him, the bricks did not hold up. They slipped out from under the van, crushing the thief under the vehicle, which weighed thousands of pounds.

The next morning, the owner of the van found the thief’s body crushed underneath the van. The would-be robber did not have a driver’s license or any form of ID on him, and the police could not immediately identify him.[7] 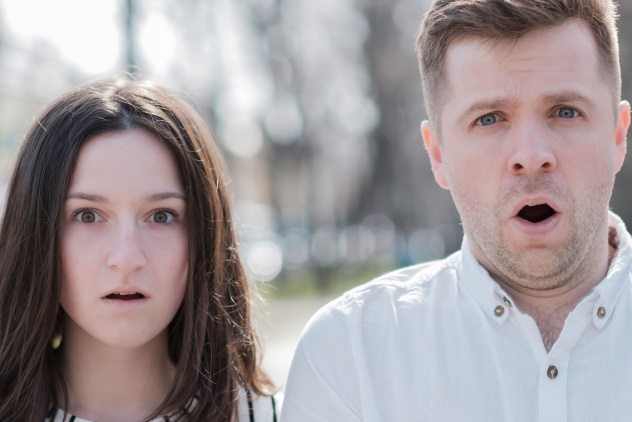 A pair of thieves in Seattle, Washington, thought they were sneaky by stealing everything they could carry and slipping out the rear fire exit door of a Costco. In March 2018, however, the security officer recognized the man, who he had witnessed carrying a knife and successfully slipping out the back door with stolen goods in the past. He knew that the man was back to strike a second time and called the police immediately.

This time, the 30-year-old man had a 21-year-old woman with him as his accomplice, and an 18-year old man was sitting in a car as their getaway driver. The man and woman were holding over $2,000 worth of laptop computers and vacuum cleaners. Little did they know that police officers had already arrived, and the back door had been barricaded with their cars.

As the couple burst through the fire exit, the police greeted the them with big smiles on their faces. The thieves were completely shocked to come face-to-face with the cops. They dropped the boxes and didn’t even try to escape. They were arrested immediately, and everything was captured on body cameras.[8]

Robber gets RAN OVER by car (instant karma)

Going to a 24-hour Denny’s can be a fun time with friends, but venturing out in the middle of the night also comes with the added risk of running into criminals. In March 2017, a group of four people were getting into a car to leave a Denny’s parking lot in Hawthorne, California, when an armed gunman ran up to them and pointed his gun at the driver, demanding their money.

The thief never anticipated that these people wouldn’t go down without a fight. One woman in the back seat opened the car door and bolted for the Denny’s so that they could call the police. The driver put the car in reverse and put his foot on the gas. The thief realized that things had already gone south, so he tried to run toward his accomplices in their getaway car, which did not stop for him.

The victim driver did a quick turn and ran over the thief at high speed. The thief was holding the gun as he ran, and the impact of being hit by the car caused him to pull the trigger, and he shot himself in the head. Somehow, the thief survived, and he was taken to the hospital in police custody. None of the customers or employees were hurt, and everything was caught on the security cameras.[9] 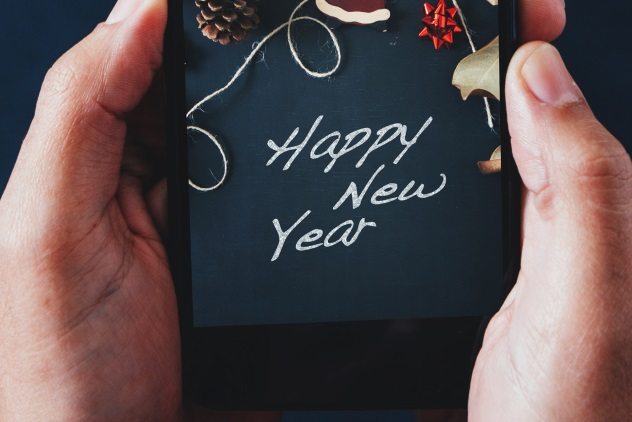 On December 31, 2010, a female suicide bomber was preparing a terrorist attack during the New Year’s Eve celebration in Moscow’s Red Square, where thousands of people gather in the streets each year around the Kremlin to watch a beautiful fireworks display. Along with two accomplices, this woman planned to push her way into a crowded area. Her partners would send a text message to her cell phone at midnight, which would trigger the explosion in the crowd, killing hundreds of people in close proximity to her. Just a few days earlier, the same terrorist group had killed 35 people at an airport, and they were trying to strike again.

As this woman prepared the attack, her cell phone carrier sent her a “Happy New Year” text message a few hours before midnight. This triggered the bomb early, and it exploded. The two accomplices were able to escape the explosion, but the authorities were able to identify them.[10]

Read more stories of the universe settling scores on 10 People Who Got Exactly What They Deserved and 10 Creative Ways Famous People Got Their Revenge.