With those big eyes and fluffy tails, it’s easy to forget that squirrels are part of the rodent family. Some people even wish they could have them as pets.

However, squirrels have a secret. They can actually be pretty aggressive and dangerous under the right circumstances. They’re all around us—up in the trees, scurrying past our feet, and hiding in plain sight. These 10 stories show what happens when squirrels decided to attack. 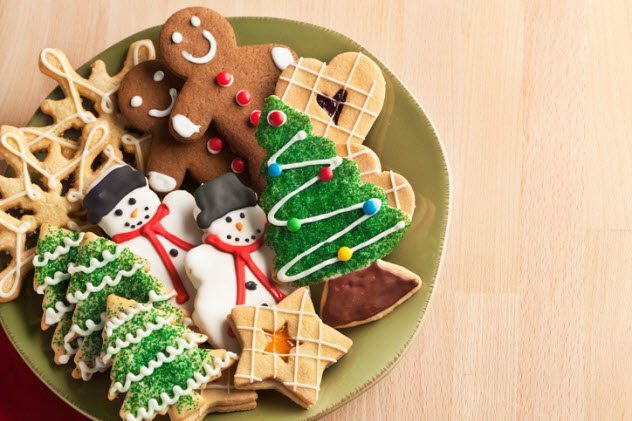 It is never good to leave food out in the open. In January 2018, a New York City resident may have expected to find cockroaches or ants crawling over the uneaten Christmas cookies that had been left out overnight. Instead, she came face-to-face with a squirrel that was now hyped up on sugar from eating all the cookies. The little critter was so aggressive that it stood by the door and would not let the woman leave her own apartment.

At some point, the squirrel ran on top of the kitchen radio and turned music on at full blast. The woman had to call the NYPD to show up at the house. They probably never expected that the squirrel would jump down from the ceiling, bounce off the counter, and lunge at a police officer.

It landed on his arm as blaring rock music played in the background. Then the animal ran all over the apartment, causing mass chaos. Eventually, the officer had to pull it out from behind the stove. Though it was biting down on his gloved hands, the policeman was able to release the squirrel back into the wild.[1] 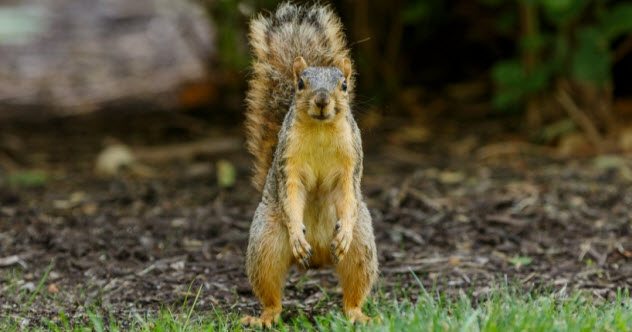 It’s not uncommon to see squirrels on a college campus. After all, there are usually a lot of trees and plenty of food dropped by students who are eating outside or between classes. However, if these little furry creatures did suddenly decide to turn on humans, there is no better place for them to attack than these very schools where they are known to congregate.

This is exactly what happened in 2017 at Indiana University–Purdue University Indianapolis. All across the campus, there were multiple reports of squirrels running up to students and biting their ankles as they walked by during the summer term.

The school’s website began posting public service announcements to students to let them know that they should not feed the squirrels like pets. Apparently, if squirrels become trained to expect food from humans, they get lazy and stop hunting for food on their own. Then, when the food supply suddenly stops like during summer break, they become aggressive every time they see a human.[2]

8 Attack In The Big Apple 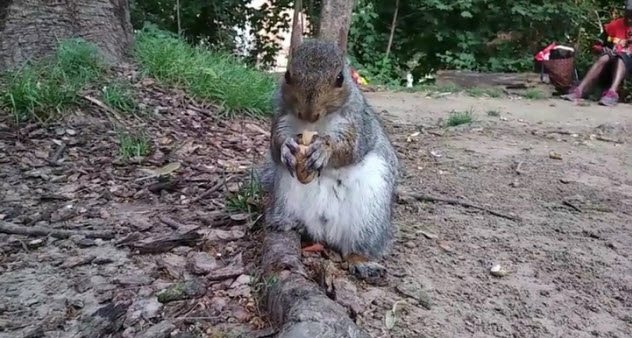 There is an understanding that terrorists target big cities for their attacks, and apparently, it’s no different when a rodent decides to seek out new victims. It was a warm summer in July 2017 at Prospect Park in New York City. In just one weekend, a squirrel attacked multiple people. Five of the incidents were reported to the police.

It was believed that the animal could be rabid. Local authorities warned people to watch out for squirrels by posting signs all over the park in multiple languages. They advised anyone who had been attacked by a squirrel to go to a local hospital immediately just in case they had contracted rabies.

The media was interviewing locals to ask if they were afraid of squirrel attacks, and most of them said they didn’t care. One even joked that he believed his dog could handle any squirrel attack. Little did he know that not even canines are safe from a squirrel’s wrath.[3] 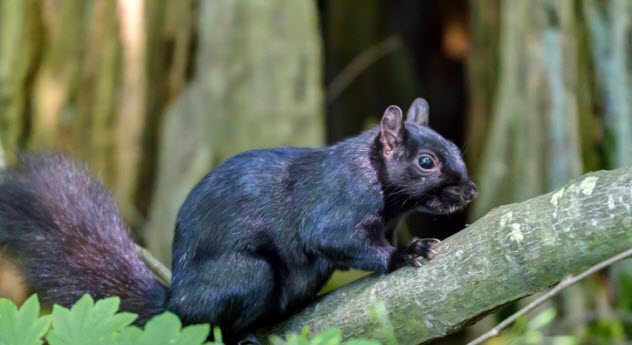 It’s very normal for dogs to bark at squirrels. Their simple existence is enough to drive a pup insane. Apparently, though, squirrels are not fans of being yelled at in another animal’s language. In 2005, a stray dog was barking at a group of black squirrels in a small village called Lazo in Russia.

When the dog approached their tree, several squirrels jumped down and began attacking it. Three local men witnessed the scene. They described watching the squirrels gut the dog and eat it alive. The men started running toward the scene to try to save the dog. The squirrels looked up, and when they saw the humans, they ran away carrying pieces of flesh in their mouths.[4]

Local authorities and scientists were baffled by the case, calling it “absurd.” If there had not been multiple witnesses to confirm the truth, it would be enough to brush it off as a tall tale. The only explanation they could come up with was that there was a pine cone shortage and the critters didn’t have enough to eat. 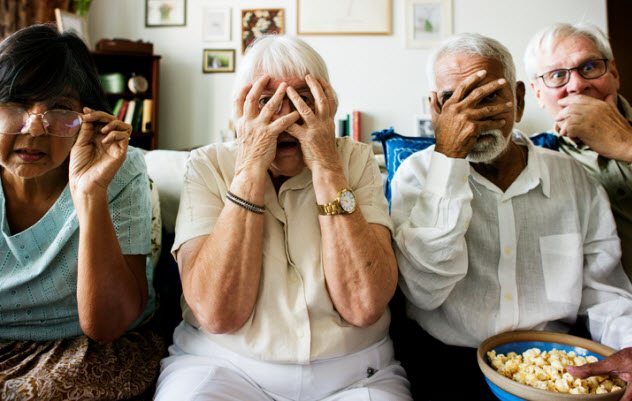 On the savanna, lions like to target the weak and elderly when they hunt because it’s easier to take down their prey. Apparently, squirrels think the same way. In 2016, a squirrel ravaged a retirement home in Florida.

A squirrel ran through the front door of the Volusia senior home and ran straight for the activity room where several elderly people were quietly seated playing chess, doing puzzles, and reading books. The squirrel began jumping on people, biting into their flesh, and scratching with its claws.[5]

Those who could move ran out of the room screaming, but a few of the immobile people were stuck without a way to escape. Someone was brave enough to grab the squirrel and throw it outside. Several people were bleeding by the end of it, and they had to call 911 for an ambulance to help treat the injuries and administer a rabies vaccine. 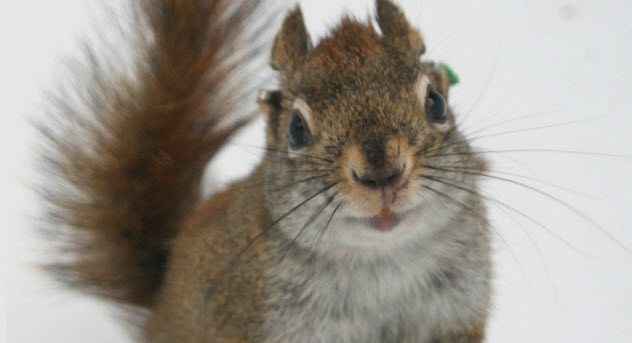 In 2014, Jessica Haines, a Canadian biologist from the University of Alberta, was studying the behavior of wild red squirrels. She was the first scientist to discover that red squirrels sometimes practice “sexually selected infanticide.” This only happens in animal species that are polygamous.

The gestation period for red squirrels is a mere 38 days. So a female might have more than one litter of pups in the same season. If a male has one litter of babies with a female, then another male can come along and knock her up soon afterward.

Squirrels don’t normally mind sharing, but this made at least one male incredibly jealous. When his baby mama gave birth to the second litter, he killed the newborn babies of his rival. Apparently, this is a tactic to ensure that his genes are passed down more often than the others. Producing strong babies increases his chances of mating again in the future.[6]

He may repeat the infanticide as long as it helps him to get what he wants. However, this is very strange behavior for a squirrel. As there was no shortage of female mates, scientists were puzzled as to why he did this.

Haines studied the squirrels for so long and gathered so many DNA samples of the same colony that she was actually able to identify the murderer. She monitors closely to see if he will strike again.

4 Granddad To The Rescue 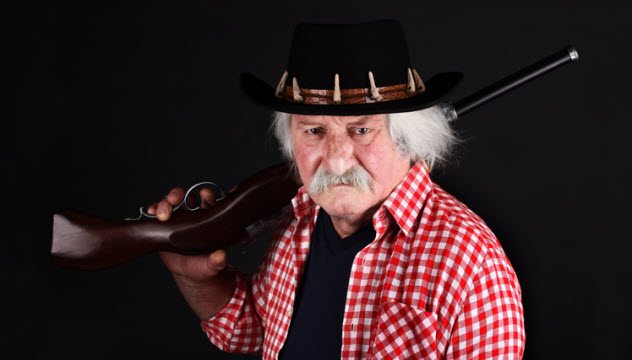 In Knutsford, England, a squirrel was on a vicious rampage and attacked several people in the neighborhood. It ran up to an unsuspecting two-year-old girl named Kelsi Morley. Like most toddlers, she thought it looked adorable and was happy that it came so close to her.

She bent down to get closer to it, and the squirrel bit her in the face. The little girl began screaming. Her mother tried to help, but the rodent’s fangs were still lodged in Kelsi’s forehead. The mother had to pin Kelsi down and yank the squirrel off because it refused to let her go.[7]

Bleeding and most likely scarred for life, Kelsi was rushed to get medical aid. They called the Royal Society for the Prevention of Cruelty to Animals (RSPCA) for help. But the RSPCA refused to do anything, saying that they only come out to help rescue injured animals, not people.

Kelsi’s grandfather had heard enough. He didn’t want the squirrel to live another day so that it could terrorize more people. He found the violent little creature and shot it with his gun. 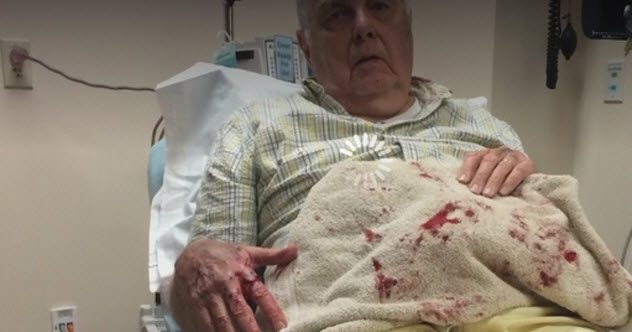 It was the day after Thanksgiving in Novato, California, and 87-year-old Richard Williams had his garage door open as he was doing some chores. A squirrel ran toward Williams at full speed and jumped on him, clawing and biting all over his body.

Williams battled with the squirrel, trying to pry it away, but it gashed its teeth into his arm, fingers, and legs to the point where he was bleeding profusely. Williams began yelling, and his wife came to help him. She grabbed a broom and swatted the squirrel away. That only made the animal angry, and it jumped on her instead. Williams grabbed the squirrel’s tail and slammed its body down on the concrete.

It turns out that a squirrel had attacked five other people in Novato over the course of two weeks. Local authorities believe that it must have been the same one. All the victims were given a rabies vaccination.[8]

Squirrels run across the road directly in front of cars so often that it’s easy to wonder if they are adrenaline junkies or if they are trying to cause an accident on purpose. In fact, this scenario was turned into a GEICO commercial in which the squirrels give each other a high five after causing a crash.

In 2015, a squirrel caused a multicar pileup after it dashed across the Island Highway in Nanaimo, British Columbia. A 53-year-old man slammed on his brakes, and a commercial food truck hit him from behind. Two more pickup trucks crashed as well.

The entire highway had to be shut down in the middle of rush hour as the debris was cleared off the road. Thankfully, none of the drivers or passengers was hurt.[9]

A man named Adam Pearl from Meridian, Idaho, has an unusual pet—a squirrel named Joey. For as long as Joey lived with Adam, they were best buds. Adam was gone from his house for a few days, but he left out plenty of food and water for Joey to survive while Adam was gone.

While Pearl was away, a burglar broke into the home. He grabbed a few easy-to-carry valuables and went into the bedroom to open the gun safe. Joey knew this stranger was up to no good and lunged at him, scratching and biting his arms until the burglar left the house.[10]

There was enough evidence for the police to catch the burglar, and he confessed to everything. Adam Pearl got his stolen items back, and Joey was rewarded with malt candy.

Shannon Quinn is a writer from the Philadelphia area. You can find her on Twitter.