Science fiction is the only genre that tends to focus on the future. This means that filmmakers are able to depict hopeful visions of what lies ahead, like in Gene Roddenberry’s Star Trek, or a world that has fallen apart.

One of the obstacles to making a great science fiction film, however, is showing a fully formed vision of the future. Sometimes, films are able to predict technology that end up becoming a reality, like invisibility cloaks. More often, though, the futures depicted in science fiction films end up looking remarkably outdated. This list will review ten of the most notable examples of graphics that, at the time of a film’s release, appeared cutting-edge but seem laughable in hindsight.

Copy of Back to the Future II Jaws 19 Scene

The first half hour of Back to the Future Part II takes place in an alternate version of the future—October 21, 2015, to be specific. Released in 1989, the film had to speculate about what the world would look like more than 25 years into the future. While it’s to the chagrin of many that Mattel hoverboards do not yet exist, many people who have seen the movie also remember the sequence when Marty McFly runs into a 3-D preview for Jaws 19, which is playing at the Hill Valley multiplex.

On one hand, the film was able to predict how popular 3-D technology would become in movies. On the other hand, the 3-D projection depicted looks low-quality today with its chunky polygons. In 1989, however, the technology impressed many moviegoers. The film’s art director, however, claims that even at the time, the production department could have achieved a much more finished-looking product and instead chose the graphic for its manic qualities.[1]

Released in 1987, the exact year RoboCop is set in has never been revealed. The reboot, however, was set in 2028. And the original film is at least set far enough in the future for its protagonist and as well as the Enforcement Droid Series 209 to exist. Looking back, the film was able to predict some things with great accuracy: Detroit is now a crime-ridden city and bankrupt, and law enforcement relies on computers in the form of aerial drones to fight crime.

There are some laughable graphics in the film for those who are tech-savvy, though. For example, RoboCop’s loading screen reveals that he is operated through MS-DOS 3.3. First released in 1981, the operating system MS-DOS went through eight versions until all development on the system stopped in 2000.[2] Today, DOS stands as a relic to many and nothing more than a long-gone symbol of personal computers in the 1980s and 1990s.

8 The Cutouts And Scale-Model City In Logan’s Run 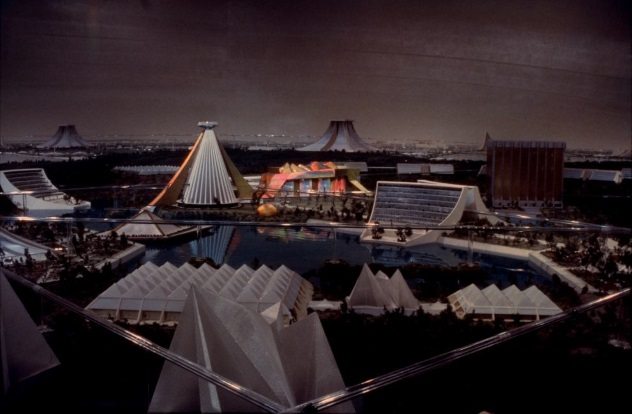 Released in 1976, Logan’s Run took place in the year 2274, at a time when the survivors of the human race live in an underground utopia controlled by a sentient computer. In some ways, Logan’s Run predicted the hookup culture that exists today and is popular with applications like Tinder. In the film, when people want to have sex, they use a computer to select their partner and, provided that the other party is willing, engage in consensual sex. Logan’s Run won an Academy Award for special effects.

Perhaps the most comical graphic involves the arrival into the domed city, which depends on cutouts and what is clearly a miniature model of the city. The film’s director has even commented on how comical the film’s effects look today but argued that the crew made the best they could out of the technology that was available at the time to show a city that was nearly 300 years in the future.[3]

7 The Pixelation In Westworld

Released in 1973, Westworld was a technical landmark of a movie, marking the first feature film to use digital image processes as well as the first film to pixelate photography. The plot revolves around visitors to a futuristic amusement park whose androids malfunction. The film ended up predicting much of the automation that is currently in development at amusement parks like Disney World and Universal Studios, but in doing so, the movie treated its audience to some laughable graphics.

Westworld was shot on a $1.25 million budget, and $20,000 of that budget was allocated to the two minutes that depicted the perspective of an android character in the film.[4] Because the production department lacked a color scanner, the processing for this sequence took approximately eight hours for every ten seconds. Today, pixelation is done routinely and inexpensively, which means that it is often used on cooking shows to mask surprise ingredients. Furthermore, work has been done on bionic eyes recently which makes this pixelated perspective even more comical.

6 The Outdated Microprocessor In Terminator

The Terminator series is recognized by many for always having cutting-edge technical effects. Released in 1984, the first Terminator film featured a cyborg sent from 2029 to 1984 to kill Linda Hamilton. In an era where robots can manufacture human skin, the future technology depicted in the film is looking increasingly possible.

Even though it was released in 1968, Stanley Kubrick’s 2001: A Space Odyssey managed to predict a world where electronics were small, inexpensive, and found nearly everywhere. Also, through clever direction and cel animation, the film was able to mostly avoid outdated graphics. The film’s sequel, 2010: The Year We Make Contact, however, did not fare as well.

While 2010 uses the best (but now outdated) graphics from the 1980s, most laughable is the film’s use of the older cathode ray tube (CRT) televisions. While CRT televisions were found in almost 90 percent of American households in 1960, these older-style televisions were outsold by the much thinner LCD televisions by 2008.[6]

Most people who have heard of the film would not expect Space Mutiny, which was released in 1988 and became a cult favorite on Mystery Science Theater 3000, to have great special effects or predict the future.[7] Set in the future, the film takes place on a starship during a mutiny. As a result, a crewman must fight to stop this mutiny to prevent the spaceship from being docked on a distant planet.

Perhaps most embarrassing is the sequence in the film which depicts vector graphics being used to show how the starships launched ballistics. Vector graphics were used in early arcade games like Asteroids during the 1970s but had almost entirely been replaced by more advanced effects by the mid-1980s. As a result, suggesting that starships years after 1988 used these graphics was a ridiculous idea. Considering these outdated elements, it should not come as a surprise that the spaceship combat footage for Space Mutiny came from the 1978 TV show, Battlestar Galactica.

Released in 1997, before researchers had completed the Human Genome Project, Gattaca told the story of Vincent Freeman, who was born naturally but has a younger brother who was “optimized,” or born through technological means. Vincent suffers from bad eyesight and a heart defect but wants to work for the country’s space program. He manages to fool the space program into thinking that he is an athlete perfect genes, where he succeeds in his position. The film ended up being oddly prophetic, now that technological advances have allowed researchers to predict educational goals and health risks based on a person’s DNA sequencing.[8]

While the film was nominated for an Academy Award for best art direction, what makes it laughable in hindsight is that technicians in the movie are able to quickly perform intricate analyses of a person’s DNA, but the technology used by Gattaca Aerospace Corporation lacks what are now considered everyday high-tech features, like sharp resolution and applications with touch screens.

Released in 1984, Sexmission is a Polish film that is probably the funniest entry on this list. In the film’s world of 1991, two friends volunteer for a hibernation experiment. Rather than being awoken three years later, however, the two pals wake up in 2044 to a post-apocalyptic world. The film has become very popular in Poland, with one 2005 poll revealing that Sexmission was the most popular movie in 30 years. While the film is a comedy, it was also in a way prophetic, considering that NASA announced in 2016 that it plans to begin using suspended animation for astronauts.

All of the computers in Sexmission use wireframe 3-D graphics, which were easily accessible in the 1980s and would certainly have been phased out by 2040. What’s particularly comical, however, is the use of ZX Spectrum graphics in one sequence. Released in 1982, the ZX Spectrum was an eight-bit personal home computer that was comparable to the Commodore 64.[9] The machine was completely discontinued in 1992, which means that it definitely would not have been in used in 2044.

For those who haven’t seen the film, Alien is about a crew on a commercial spacecraft (the Nostromo) who are awoken from cryogenic sleep by the ship’s computer (Mother), which warns of a distress signal on a nearby planet. After reaching the planet, the crew discover the remains of a humanoid creature as well as a group of eggs. After one of the eggs opens, a crew member is impregnated by an alien, which gestates, eventually bursts free, and attacks the rest of the crew. In 1979, when Alien was released, its crew won numerous awards for the film’s special effects.

In 1979, the all text output from Mother looked like cutting-edge technology. In the subsequent decade, however, computers developed at a very quick pace, making the 1979 version of Mother obsolete by the time Aliens was released.[10]

While Alien is probably the most popular film on this list, it is worth noting because it is one of the few franchises that attempted to answer the challenge that science fiction films are supposed to contain the graphics of advanced societies. The Alien prequel, Prometheus, tried to explain the reason why its technology was more advanced despite being set before Alien by suggesting that Mother and other technology on the Nostromo was purposefully out-of-date because this helped protect against hacking.

Read about more attempts by creative works to predict the future on 10 Intriguing Visions Of The Future From The Past and Top 10 Films that Predicted the Future.