The Rajneesh movement made its way to Oregon in 1981 and was led by Bhagwan Shree Rajneesh. The religious cult made national news after engaging in immigration fraud, busing homeless people to their commune, and perpetrating the largest bioterrorism attack in US history in an attempt to overthrow local government leaders.

The group had several disagreements with neighboring cities and the authorities before the community was disbanded in the mid-1980s. More recently, interest in the Rajneesh movement has been reignited by the Netflix documentary Wild Wild Country. Here are ten shocking facts about the Rajneesh movement.

10 Their Leader Was Bhagwan Shree Rajneesh 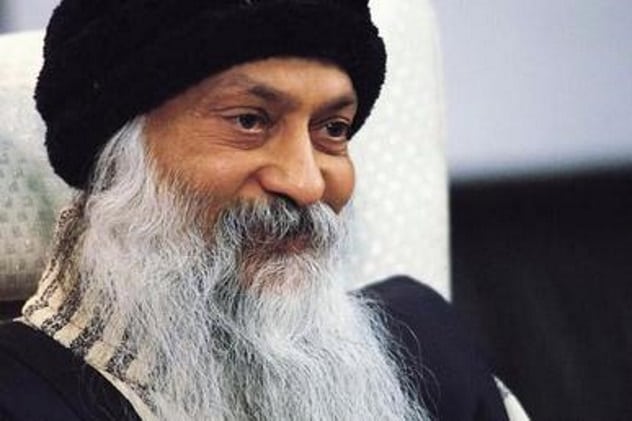 Bhagwan Shree Rajneesh, born in 1931, was a guru and meditation teacher from India. His success as a spiritual leader began in the city of Pune. He taught his disciples to live in the world fully without becoming too attached to it. He also taught dynamic meditation to help people experience the divine, and he had a progressive approach to sexuality.

In 1981, he moved to the United States, and a year later, he incorporated Rajneeshpuram. This was the new city in Oregon he planned to build for his followers. The spiritual leader attracted thousands of followers from around the world. Many of his devotees were highly educated and wealthy. Several years after opening the large ranch for his followers, Rajneesh was arrested on charges of immigration fraud. After his trial, he immediately left for India and changed his name to Osho. He spent the rest of his life in several countries before his death in 1990.[1] 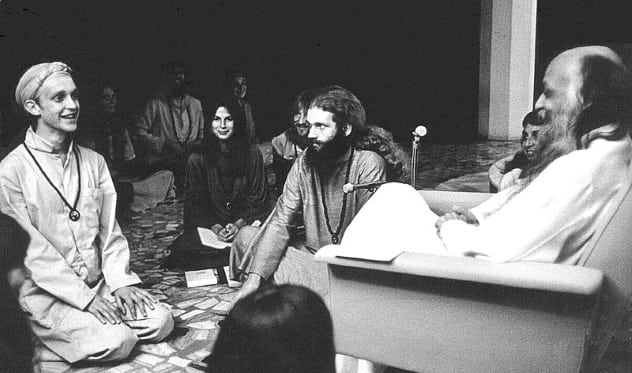 Many people were attracted to Rajneesh and his teachings largely due to the embrace of materialism and sexual hedonism. Rajneesh was a wealthy man himself, and he didn’t mind flaunting it. He often wore expensive watches to show his wealth. Many of his followers were already rich or had a higher education and were attracted to his wealth.

Rajneesh also taught that sex is a path to enlightenment. He believed sex is divine, and the primal energy of sex has the reflection of godliness in it. He said that in the moment of sexual climax, the mind becomes empty of all thought. The empty mind is like a void, and a vacuum is the cause of the shower of divine joy.[2] It’s obvious to see why Rajneesh attracted so many followers with teachings centered on wealth and sex. 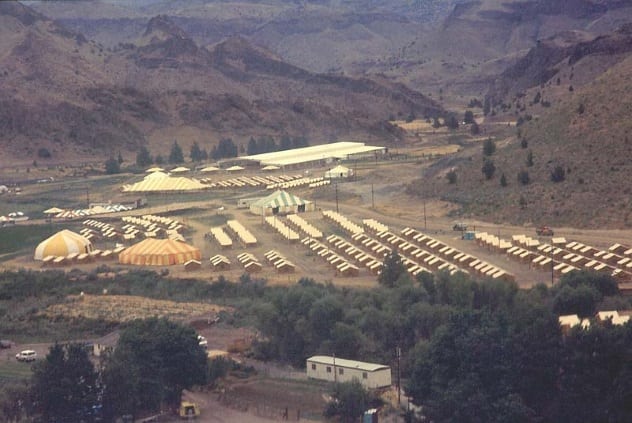 When Rajneesh moved to the US in 1981, he purchased the Big Muddy Ranch just outside of Antelope, Oregon. The community was named Rajneeshpuram, also known as Rancho Rajneesh, and was briefly incorporated as a city in the early 1980s. People from all over the world escaped here to create a utopia filled with spirituality and a free love atmosphere. The community was self-sufficient and had everything it needed.

Legal issues soon shook Rajneeshpuram as Rajneesh and several others found themselves in legal battles for criminal activities. The Rajneesh movement quickly collapsed, and Rajneeshpuram was evacuated.[3] Montana billionaire Dennis Washington bought the property to be used as a destination resort, but he ran into zoning issues later. The Washington family later donated the land to Young Life in 1996. The land is now home to Young Life’s Washington Family Ranch, which is a 64,000-acre Christian youth camp that features zip lines, an Olympic-sized pool, go-karts, a man-made lake, water slides, and an 8,200-square-meter (88,000 ft2) fitness center. 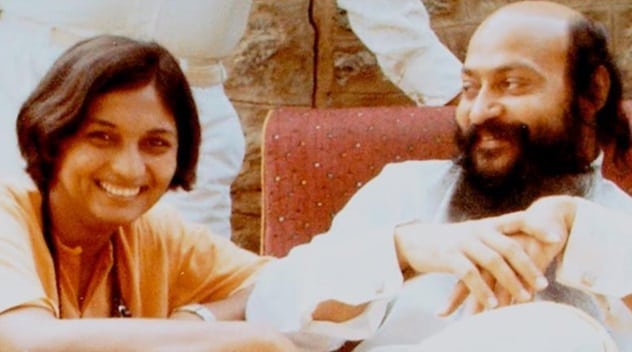 Rajneesh’s right-hand person and secretary was Ma Anand Sheela. She instantly became devoted to Rajneesh after meeting him when she was just 16 years old. She helped convince him to come to America and managed the commune while also being the president of the Rajneesh Foundation International. She was a fearless and ruthless leader in Rajneeshpuram and made many media appearances to troll the neighboring towns and those who hated the Rajneesh people.

She was looked at by many as someone who shouldn’t be crossed, but her crimes started catching up with her. In 1984, she attempted to influence a local election by using hundreds of homeless people and registering them to vote. After the plan failed, she arranged for Rajneesh scientists to contaminate food at local restaurants to make people sick before the elections.[4] She was also accused of wiretapping and attempted murder.

In 1986, she pleaded guilty to attempted murder, wiretapping, immigration fraud, and engineering a salmonella outbreak. She was released from prison early for good behavior, and she now lives in Switzerland, where she cares for 29 mentally disabled patients in her two care homes. 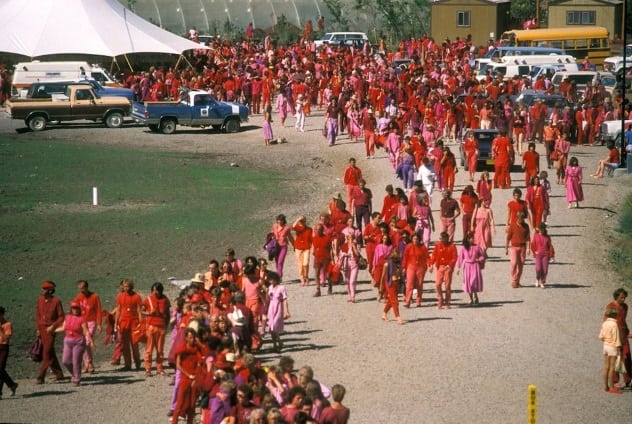 The Rajneesh people are responsible for one of the largest recorded marriage fraud cases in the United States. It is said that there were more than 400 sham marriages perpetrated by the Rajneeshees. The immigration fraud was believed to be headed by Ma Anand Sheela when they moved to America. The marriages were between US citizens and visiting foreigners. They were created to give the foreigners permanent residence in the United States and bypass American laws.

Authorities were aware of the possible illegal marriages, though, and the Rajneesh people could feel the pressure. The religious cult stayed in a legal battle with the US over the immigration fraud, but they eventually lost the fight.[5] Several people were arrested for immigration fraud, admitting that the marriages were a sham to allow followers to settle in Oregon with Rajneesh. Rajneesh also pleaded guilty to immigration fraud, was ordered to pay a $400,000 fine, and was not allowed to reenter the country. 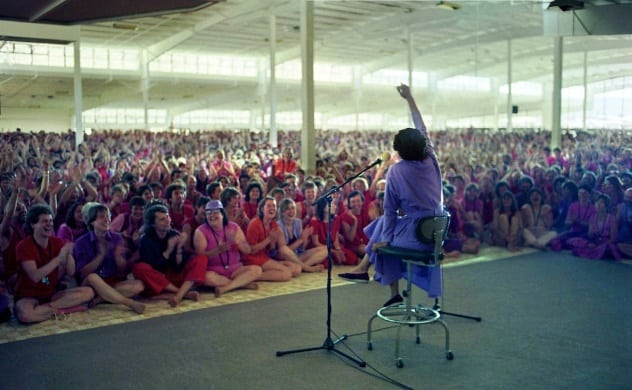 Thousands of homeless people were being bused into Rajneeshpuram to live and work in the commune. Followers claimed this was a massive new charity being performed by the group to give homeless people another chance at life. Critics of the group claimed the homeless were being shipped to the area to boost voting for members of the religious group. The leaders of Rajneeshpuram wanted to start getting members elected into government positions to give the group help with certain things, but they would need more people to vote for their members in order to get elected. This was the reason homeless people were being moved to the location and registering to vote.

The cult soon realized that many of the homeless were mentally ill and refused to vote for them or live with their ridiculous rules at Rajneeshpuram. The homeless people were told they would receive a ticket back to where they came from, but instead, they were dropped off at nearby cities, causing an influx of homeless people to these towns. Many of the homeless were even part of a $40 million suit against the Indian guru after learning they were used for voting.[6]

4 Responsible For The Largest Bioterrorism Attack In US History 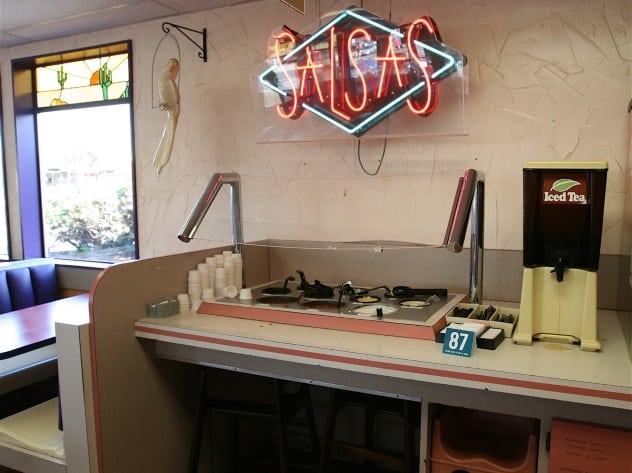 The people of Rajneeshpuram wanted to take over the local government, and another one of their crazy plans to do so would be more harmful than shipping homeless people in and out of their town. Since they didn’t have enough people to swing the votes their way, they decided they would take out their competition. After conducting an inspection of the ranch, Wasco County Executive William Hulse and Commissioner Raymond Matthew became ill. They had drunk ice water from the commune that had traces of salmonella in it.

Followers of the group didn’t stop there, though; they would also be responsible for the largest bioterrorism attack in the United States. Salsa bars, vegetable and salad bars, table-top creamers, and other foods at a dozen local restaurants and supermarkets were contaminated with salmonella. Nobody died, but more than 750 people were sickened due to the Rajneeshees’ actions. They had hoped that if enough people were sick during the election, they could throw it to get their leaders in. The plot didn’t work, though, because the locals were angry and turned out to vote against the Rajneesh people after suspecting it was them who caused the illness.[7]

The controversial guru was accused of brainwashing his followers. They would always wear certain colors and a portrait of Rajneesh around their necks. Dynamic meditation was performed every day by the Rajneeshees to get them out of their heads and bodies. There were four phases of the mediation that gave the followers the experience that their minds were leaving their bodies. This was believed to be part of the mind control that Rajneesh employed on the Rajneeshees.

Former members of the cult have even spoken out about how they believed they were brainwashed after arriving. Roselyn Smith claimed that she was part of a sophisticated program of mental manipulation. She remembered entering a four-day breath therapy group after arriving at the commune, and she said that by day three, she’d entered into a cathartic state that lasted for hours. She then went through a five-day intensive enlightenment group, a sensory deprivation tank, and a 14-day insight group. She said it took her years of expert counseling to regain self-confidence and self-worth after leaving the group.[8] 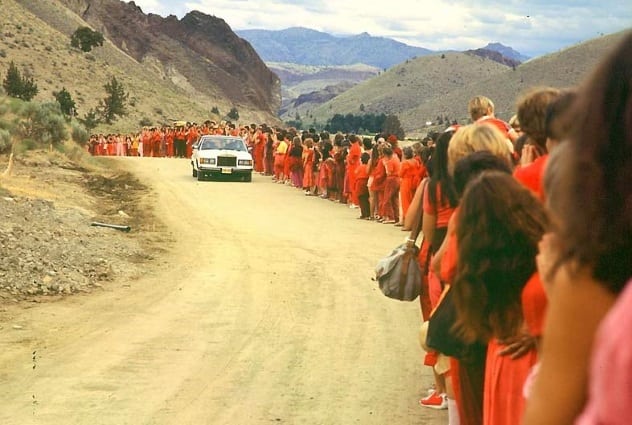 As stated earlier, Rajneesh embraced materialism and enjoyed the finer things. He owned a massive fleet of expensive cars which he would use for his daily “drive-bys,” which was a drive along the road of Rajneeshpuram while the followers would line the road clapping. Rajneesh once said, “Wealth is a perfect means which can enhance people in every way . . . So I am a materialistic spiritualist.”[9] 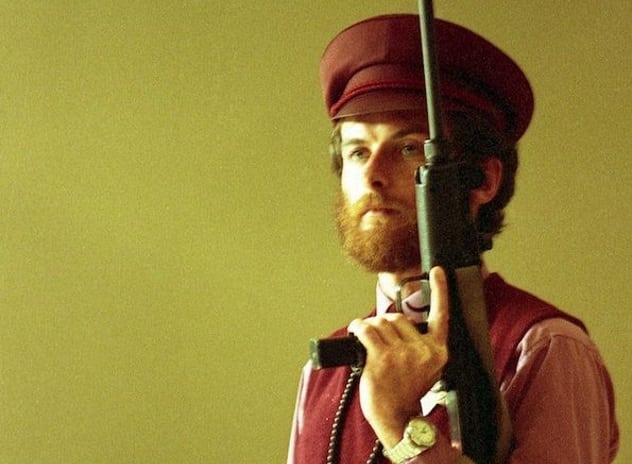 Devotees of the religious leader plotted to assassinate Oregon’s US attorney and its attorney general in order to prevent criminal probes against Rajneesh. The plan was uncovered by FBI agents investigating the followers.[10] The group decided to murder the US attorney and then assembled weapons and spied on him, but they never carried out the plot.

This was the end of the Rajneeshees in Oregon; Rajneesh had already been deported from the United States. Several of the other top members had fled the country as well. Sheela served time in prison and was eventually deported to Switzerland (where she could not be extradited). Seven cult members had been indicted in the murder conspiracy by 2006.

Read more creepy facts about cults on 10 Former Cult Members And Their Chilling Stories and 10 Doomsday Cults Of The 20th Century.

10 Brutal Facts About Growing Up In The Aztec Empire