The original Star Trek aired from 1966 to 1969. Today, some of its ideas are laughable, such as a computer dedicated entirely to library holdings. Other ideas are downright sexist, such as the miniskirts female officers and enlisted personnel must wear as part of their military “uniforms.” However, the starship’s transporter beam and deflector shields remain futuristic concepts, even by today’s standards.

The regular characters and the actors who played them also make the original series entertaining to watch, as much today as 50 years ago. Here are ten intriguing, little-known facts that make them even more interesting. 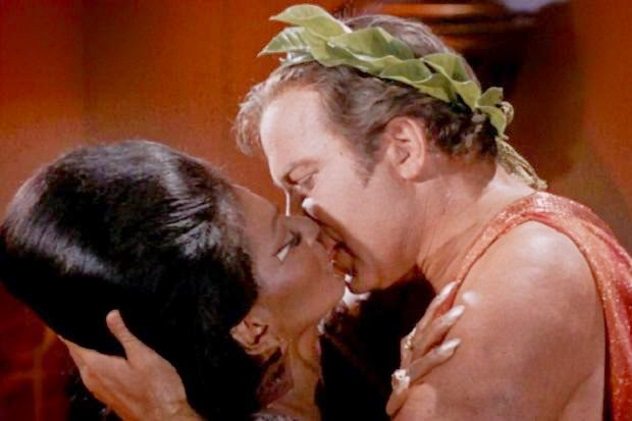 For many years, the kiss between Captain James Tiberius Kirk, of Iowa, and Lieutenant Nyota Uhura, of African descent, was thought to have been the first televised interracial kiss, but research has shown it is, in fact, the third.

Kirk and Uhura kiss in “Plato’s Stepchildren,” the tenth episode of season three, which aired in November 1968. They and several other members of the USS Enterprise‘s crew visit the planet Platonius in answer to a distress call, only to find that its inhabitants, the Platonians, have telepathic powers. For entertainment purposes, the Platonians use their abilities to make Kirk attempt to seduce Uhura. In the process, Kirk and Uhura exchange a passionate kiss.

According to the British Film Institute, doctors Giles Farmer (John White) and Louise Mahler (Joan Hooley), characters in the British prime-time soap opera Emergency Ward 10, exchanged an interracial kiss in 1964. However, their kiss was preceded by one between Lloyd Reckford, who plays a young black Cambridge student, and Elizabeth MacLennan, who portrays a white working-class girl, in the 1962 televised Grenada Play of the Week production You in Your Small Corner.

Unsure how the kiss between Kirk and Uhura might be received at the time, NBC executives ultimately decided to leave it in the episode. Although Kirk and Uhura’s kiss can’t be considered groundbreaking, it’s still seen as a “barrier-breaking moment,” and the Star Trek episode was watched by many more viewers than either of the earlier British productions.[1] 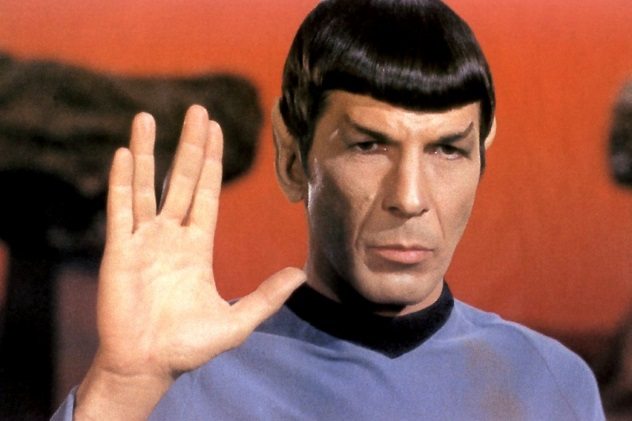 In “Amok Time,” Nimoy introduces the Vulcan salute when Spock meets the matriarch of his home planet, Vulcan. The salute is made with the open hand. The palm faces the person being greeted. The forefinger and the middle finger are held together, as are the ring finger and the little finger. However, a space separates the two pairs of fingers. Nimoy said he based the salute on a gesture that Jewish priests (Kohanim) made as they blessed the synagogue’s congregation during an orthodox High Holy Days service he’d attended as a boy.

The gesture represents the Hebrew letter shin, the first letter of Shekinah, the name of the feminine aspect of Divinity, which enters the synagogue during part of the ceremony and is not to be looked upon. Nimoy’s salute is often accompanied by the verbal greeting, “Live long and prosper,” his summary of a Jewish prayer echoing the Hebrew expression Shalom aleichem, meaning “peace be upon you.”

Nimoy also created the Vulcan nerve pinch, a technique in which by simply pinching a nerve in the neck and shoulder, Spock can render a human adversary unconscious. The script for the 1966 episode “The Enemy Within” called for Spock to “lunge out from behind one of the generators” and knock out an opponent. Thinking fisticuffs were more suited to the Old West than the 23rd Century, Nimoy instead employed the famous pinch that would become a trademark of the Vulcan’s fighting style.

He attributes director Leo Penn’s acceptance of the pinch partly to William Shatner’s acting ability. After overhearing Nimoy talking to the director about employing the technique, Shatner volunteered to help Nimoy demonstrate the pinch, and Shatner did such a convincing job of passing out on cue that Penn was convinced of the maneuver’s merit.[2] 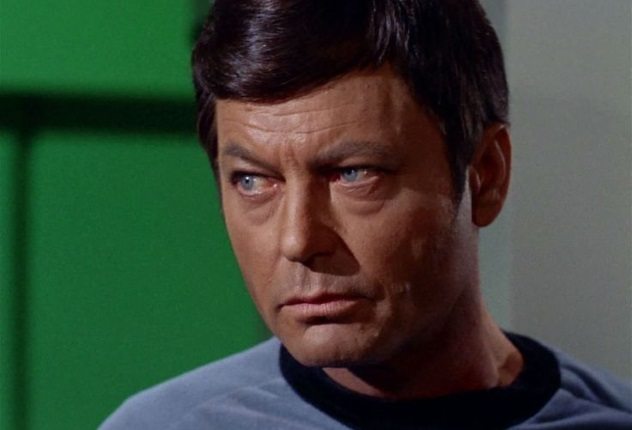 Although NBC rejected the initial Star Trek pilot, “The Cage,” the network encouraged Roddenberry to try again. With Shatner in place as Kirk and Nimoy signed to play Spock, Kelley agreed to come aboard the series as McCoy.[3] 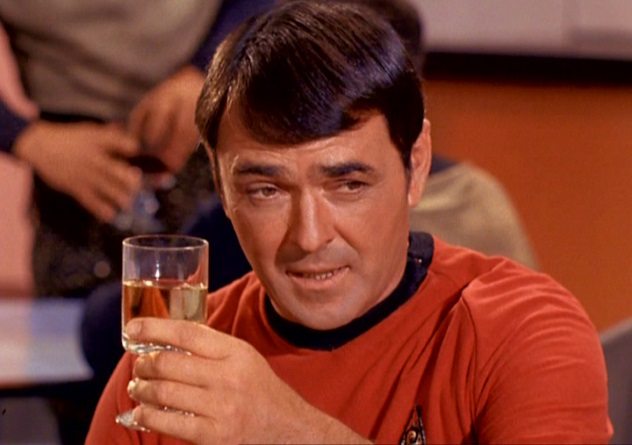 James Doohan, the actor who portrays Lieutenant Commander Montgomery ‘Scotty’ Scott, named the Enterprise‘s engineer after his mother’s father. A master of various accents, Doohan selected a Scottish dialect for Scotty because, in Doohan’s experience, Scotsmen make the best engineers.[4]

Although Scotty and Kirk seem to get along well on camera, Doohan said, “I like Captain Kirk, but I sure don’t like Bill.” He thought Shatner was “insecure” and self-centered and “hogged” the camera. 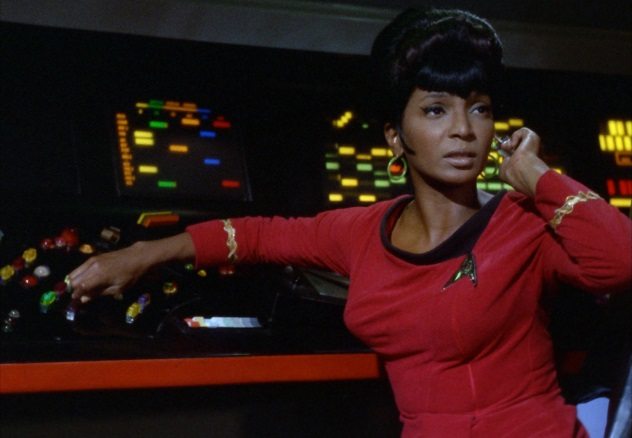 Roddenberry’s first choice of a surname for the Enterprise‘s communications officer was “Zulu,” but since the actress, Nichelle Nichols, is African-American, Roddenberry agreed a different name might be better, and he selected “Uhura.” In Swahili, uhuru means “freedom.” Roddenberry feminized the name by ending it with an “a.”

Unfortunately, despite the show’s embrace of multiculturalism and diversity, Nichols occasionally encountered racial hostility on the set, and when she discovered she was the only lead on the series who didn’t have a contract, she nearly quit. One of her fans, civil rights leader Dr. Martin Luther King, Jr., talked her in to continuing her role, praising her as a “wonderful role model.”[5] 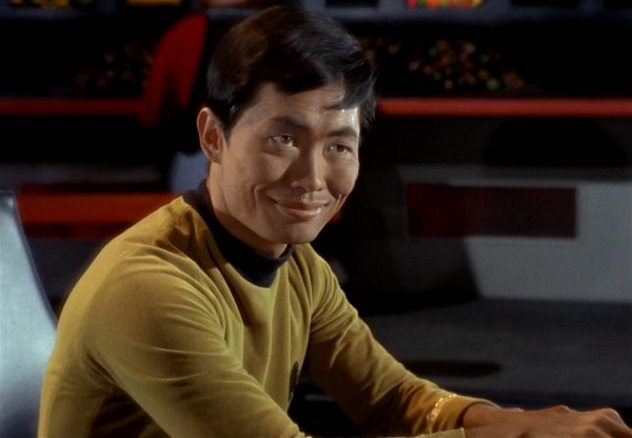 The surname originally intended for Lieutenant Uhura became that of Ensign Hikaru Sulu, instead. The Enterprise‘s Asian helmsman was played by George Takei. Roddenberry planned to expand and develop the character during the series’s second season, but Takei had agreed to appear in The Green Berets, alongside John Wayne. During the episodes from which Takei was absent, actor Walter Koenig took his place on the starship’s bridge.

When Takei rejoined the cast, he had to share a dressing room—and a script—with Koenig. Initially, Takei was jealous. He also feared that Koenig might replace him, and he took a dislike to the actor. In time, as Takei realized that he and Koenig had much in common, the two actors became good friends, even as they continued to appear side by side, Takei as the ship’s helmsman and Koenig as its navigator.[6] 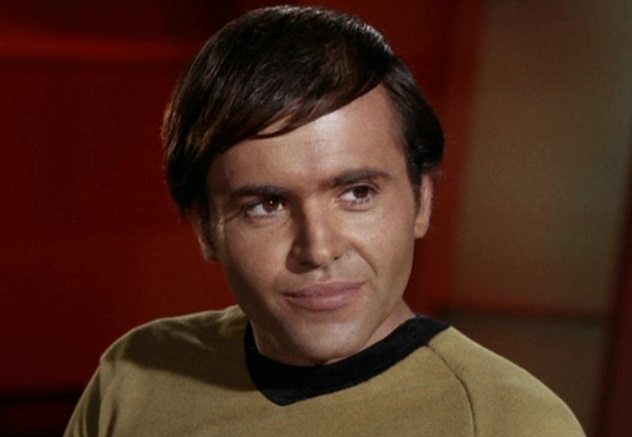 Walter Koenig was hired as a recurring cast member because Roddenberry wanted to add a younger character to the Enterprise‘s crew, someone who could attract teen viewers. Roddenberry saw the young actor’s character, Ensign Pavel Chekov, as a budding genius, albeit one hampered by his youthful exuberance, inexperience, tactlessness, his need to prove himself, and his fondness for women. Chekov’s addition to the crew would also allow Kirk to act in a fatherly role to the young Starfleet Academy graduate.

The appeal to a younger audience worked, and as Koenig began receiving a flood of fan letters from the younger viewers Roddenberry had targeted, Koenig was signed as a regular member of the cast.[7] 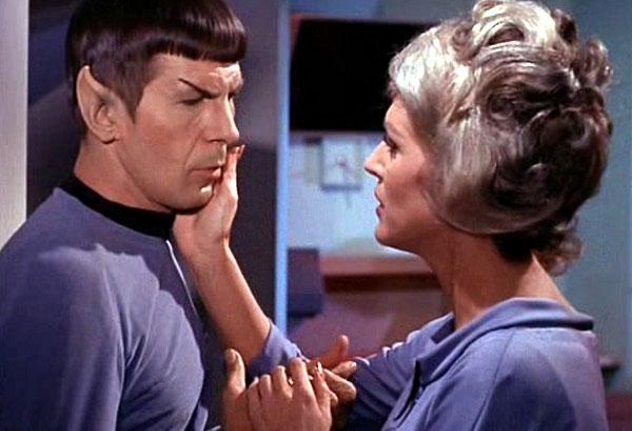 In the pilot episode of the original Star Trek, there was no Nurse Christine Chapel. Instead, Majel Barrett, the actress who would play Chapel, portrayed a different character. She was the unnamed first officer, known only by her position. NBC executives objected to a woman playing such a part and demanded that Roddenberry replace her with a man, which led to Leonard Nimoy playing Spock as Kirk’s second-in-command. Barrett said that Roddenberry “kept the Vulcan and married the woman [because] he didn’t think Leonard [Nimoy] would have it the other way around.”

Barrett, who would become Roddenberry’s wife after the original series’s cancellation, was given the role of Chapel, a character the actress herself did not especially like. She found the nurse “wishy-washy.” Chapel was in love with Spock, “who only comes into heat once every seven years,” she said. “Let’s face it, this broad’s a real loser.”[8] 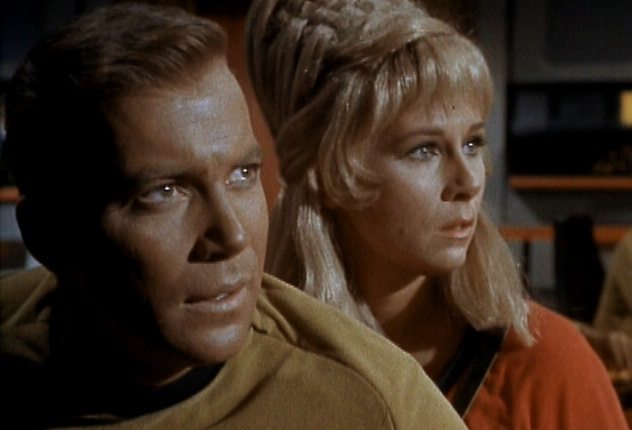 Although she was popular, Yeoman Janice Rand was written out of the series. According to Grace Lee Whitney, the actress who played Yeoman Rand, the reason she lost her role was that Roddenberry didn’t want Captain Kirk to have a steady romantic relationship with her or any other woman. In several of the episodes, romance seemed about to blossom between them, and Yeoman Rand was eliminated so that Kirk could maintain the relationship with the only “female” that mattered to him: the USS Enterprise herself.[9]

Later, Whitney and Roddenberry reconciled, and he hired her to star in Star Trek: The Motion Picture and several other Star Trek films. 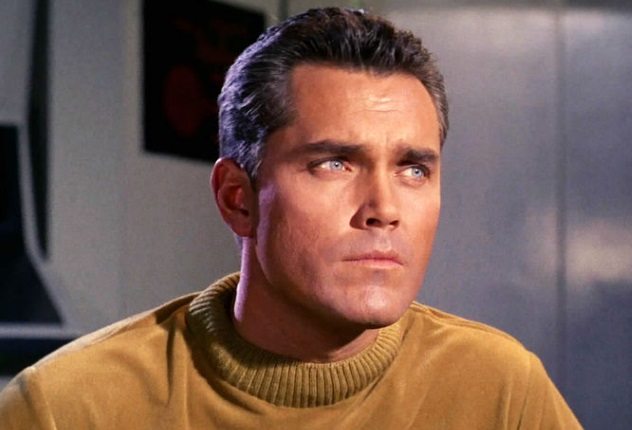 In the pilot episode, Christopher Pike, played by Jeffrey Hunter, commanded the Enterprise. When the pilot was rejected, Hunter notified Roddenberry that he no longer wanted to portray the starship’s captain, opting, instead, to pursue opportunities in making movies.

Pike reappears, much the worse for wear, in season one’s two-part episode “The Menagerie.” As the result of his having saved children from deadly “delta rays,” Pike was paralyzed and badly scarred. Now confined to a wheelchair, he’s unable to communicate except by using a machine to beep his responses to questions: one beep for “yes,” two for “no.” His situation suggests he exists in a state of “living death,” from which, at the end of the second part of the episode, he escapes into a realistic fantasy world in which he is once again mobile, well, and whole. Although Sean Kennedy plays the elderly Pike, his depiction as he was in his early days is provided by footage from the unaired pilot, “The Cage.”[10]

Roddenberry may have conceived the idea for “The Menagerie” by reviewing the script for “The Cage,” as the latter’s working title was “The Menagerie.” Used to create flashback scenes in the two-part episode, the pilot’s footage is incorporated in the new story about Pike’s heroism and eventual fate.

10 Lost Films That Were Recently Found