When we think of mummies, most of us immediately imagine Egypt. However, people have been finding ways to preserve the bodies of their dead across all continents for thousands of years.

Add to that the number of people who have been “accidentally” mummified by the natural conditions in which they died, and you’ll see that mummies can be found almost anywhere, not just in pyramids. The following mummies range from the fascinating to the downright bizarre, although you probably never learned about them in school. 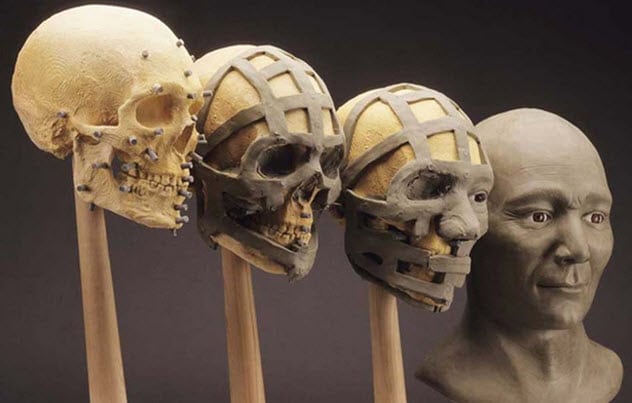 The Spirit Cave Mummy was discovered in Spirit Cave near Fallon in Nevada. In 1940, Sydney and Georgia Wheeler were exploring and excavating dry caves in the area when an unpleasant incident led to a fortunate discovery.

One fateful August day in 1940, Sydney injured his ankle while escaping from a rattlesnake and the couple took shelter in a nearby cave. Their day swiftly improved when they found that the cave contained not only 67 artifacts but also two bodies wrapped in tule matting. One body had been well-preserved by the heat of the cave.

The body belonged to a man about 45–55 years old. At the time, he was estimated to have died 1,500 years ago and was put into storage at the Nevada State Museum. It wasn’t until 1994 that modern technology was able to date his burial at 9,415 years ago, making him the oldest-known mummy in North America.

This sparked a major controversy as to who should own the Spirit Cave Mummy’s remains, with the Fallon Paiute-Shoshone tribe requesting that the remains be repatriated to them. Incredibly, sequencing of the mummy’s genome proved that he was closely related to modern Native Americans. His remains were handed over on November 22, 2016.[1] 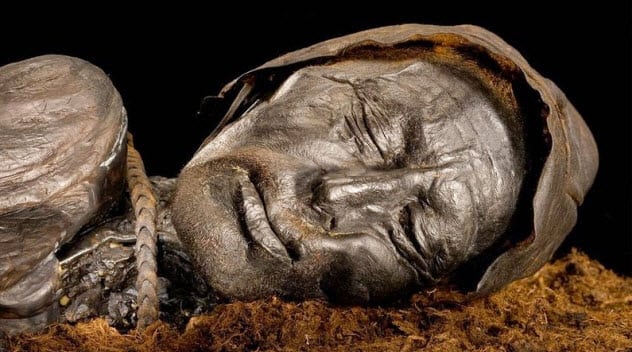 Another “accidental” mummy, known as Tollund Man, was discovered in Denmark in the 1950s. Estimated to be around 40 years old, he was found preserved in a peat bog where the acidic and deoxygenated conditions had kept his body and internal organs in good condition.

It was originally believed that this was the body of a local person who had been recently murdered. However, it was later found that he had died over 2,000 years ago.

For many years, some mystery has surrounded the circumstances of Tollund Man’s death. However, it seems that the cause of death determined at the autopsy in the 1950s was correct: Tollund Man was hanged.

Rope marks were found around his neck, and a forensic examination in 2002 discovered that his tongue was protruding, which is common in hanging deaths. Although the body decomposed after it was removed from the bog, the head was carefully preserved. You can see it attached to a copy of the body at the Silkeborg Museum.[2] 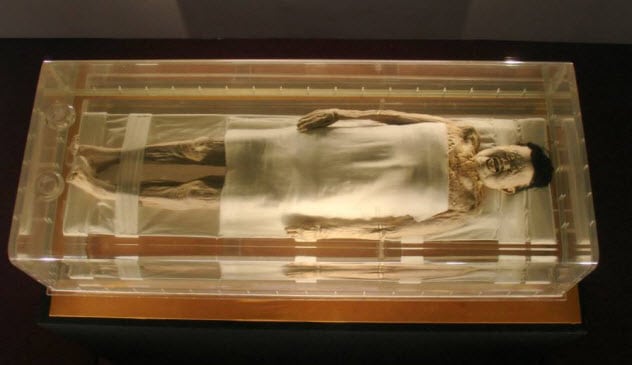 The mummified remains of Xin Zhui (aka Lady Dai) belonged to a noblewoman of the Han dynasty in ancient China. She died in 163 BC at roughly 50 years of age. Her tomb was discovered in 1971 during digging work to build an air raid shelter near Changsha. She was discovered in an elaborate and lavish burial chamber with over 1,000 precious objects.

Xin Zhui’s discovery is hugely significant because she is one of the most perfectly preserved mummies ever discovered in China. In fact, her skin is still supple and her muscles in such good condition that her joints are still able to bend.

The major organs and her circulatory system are also in excellent condition. Scientists were even able to extract small amounts of blood from her veins and identify her blood group: type A. Incredibly, even her eyelashes and nasal hair remain intact, and she still has distinct fingerprints.

For this reason, Xin Zhui’s cadaver is still being used by researchers at the Hunan Museum who are trying to find the perfect way to preserve human bodies.[3] 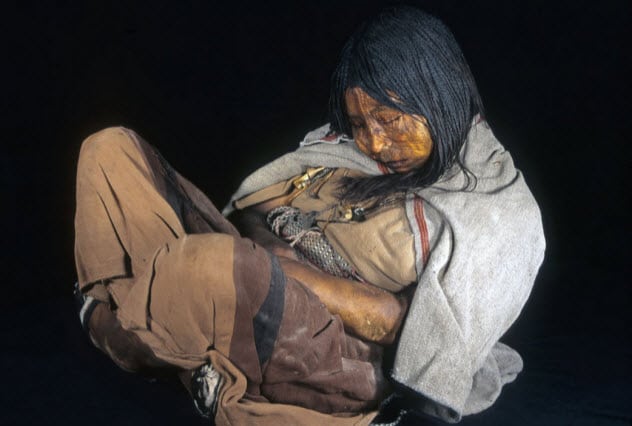 In 1999, the perfectly preserved body of a teenage girl was discovered at the top of Mount Llullaillaco in Argentina. Known as La Doncella (“The Maiden”), the girl was discovered in a cross-legged position alongside two younger children, a girl and a boy. Their bodies were some of the best-preserved mummies ever found, kept in good condition by the altitude and the fact that they were frozen by the icy conditions at the mountain’s summit.

The circumstances surrounding the death of La Doncella are tragic. It is believed that she died 500 years ago as part of an Incan sacrifice. Children would sometimes be sacrificed as part of significant rituals by leaving them on mountaintops to freeze to death.

As horrible as this sounds, it was considered to be an honor, reserved only for the most noble of children. The shape of La Donacella’s head suggests that she was indeed noble as the shape of her skull had been altered by traditional head wrappings. Huge amounts of alcohol and coca leaf were also found in her body.[4] 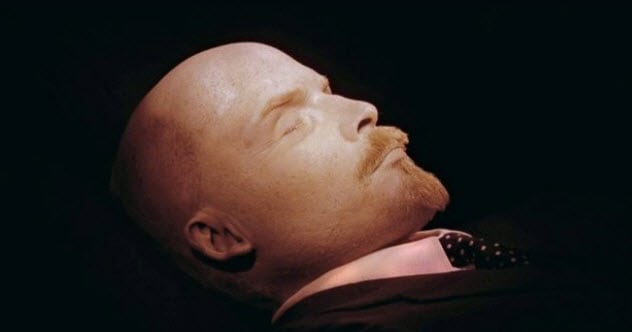 Although Vladimir Lenin died in January 1924, his body is still publicly displayed in a pyramid-shaped tomb in Moscow’s Red Square. The revolutionary leader had requested that his body be buried, so he was only meant to be displayed on a temporary basis.

Although the question of what to do with the body comes up every now and then, Lenin remains on view for the time being. Monitored carefully by scientists, he is kept at an ideal temperature and humidity in an airtight glass container to prevent his corpse from decomposing.

Cryptically, the exact method used to preserve Lenin’s body is classed as a state secret. However, scientists have revealed that the process involved removing all the bodily organs, injecting embalming fluid into the veins, and soaking the body in embalming fluid for around six months.

With split opinion in Russia on whether it is right to continue to display Lenin’s body, it is unclear how much longer he will remain in his mausoleum before being buried.[5] 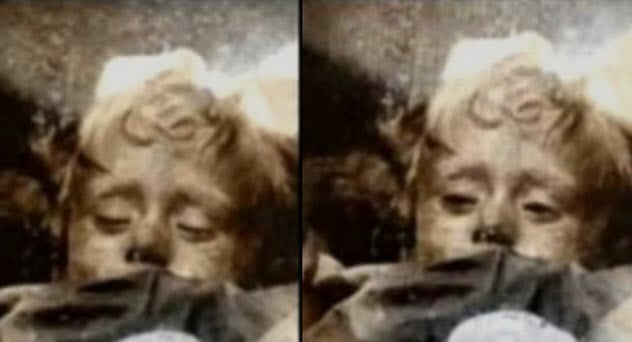 Perhaps one of the saddest stories on our list is that of Rosalia Lombardo. She died in Palermo in 1920 at just two years old, falling victim to pneumonia. Mario Lombardo, her father, was an official and was so grief-stricken that he commissioned the renowned embalmer Alfredo Salafia with preserving her tiny corpse. She is so perfectly preserved that she is often called “The Sleeping Beauty.” Her body is kept in a glass coffin in the Capuchin catacombs in Palermo.

Rosalia’s mummy gained a spooky reputation when observers claimed to have seen her eyes open and shut at various points during the day. It is even said that her irises still have bright blue pigmentation.

However, this frightening claim was debunked. It was found that the effect was created by the varying light coming through the windows of the catacombs as her eyes are actually in a constant half-closed state.[6] 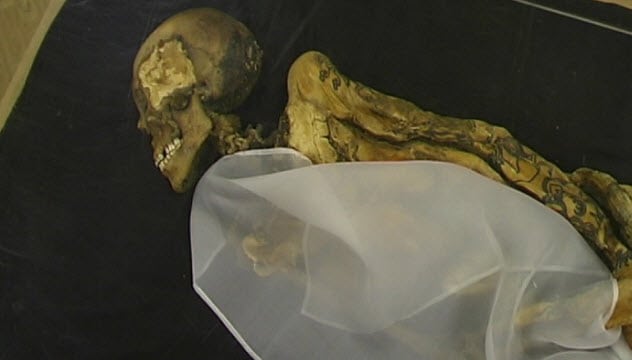 Dating from the fifth century AD, the Ukok Princess shows that tattoos stay with you for life—and beyond. Her remains were discovered preserved by the freezing Siberian conditions, and she was surrounded by six horses.

Although she may not have been a real princess, this suggests that she was almost certainly a person of high status. Food items and ornaments were also found alongside her corpse, and some witnesses say that there was even a container of cannabis.

Although her internal organs are long gone, her bones and some of her skin remain. Incredibly, the intricate tattoos down both of the woman’s arms have been beautifully preserved. These show elaborate images of animals and mythical creatures.

It is thought that these tattoos were an important part of people’s identities, showing familial links. They may also have been intended to be useful after death, helping individuals to find each other in the afterlife.[7] 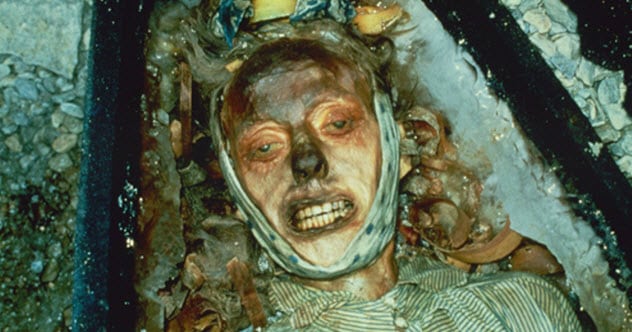 Poor John Torrington is yet another example of how the conditions where you’re buried can turn you into a perfect mummy entirely by accident. He was a petty officer on the Franklin expedition to the Arctic Circle when he succumbed to lead poisoning at just 22 years old.

He was buried alongside three comrades in the icy conditions of the tundra. Come the 1980s, excavators got quite a shock when it was decided that the time had come to dig up the remains.

When they opened the coffins, they were greeted by blocks of ice. When these thawed, they found the perfectly preserved faces of John Torrington and his ill-fated companions looking right back at them. The only deterioration was a slight shriveling of the lips and eyelids.

Although parts of his face are blue, this isn’t due to the freezing conditions in which he perished. Instead, his skin has been stained by the pigment in the blanket in which he was buried.[8] 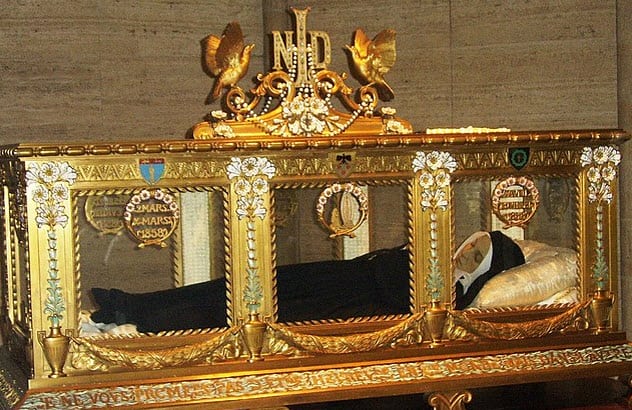 Another relatively modern mummy, Saint Bernadette grew up in France during Victorian times. As a teenager, Bernadette claimed to have witnessed the Virgin Mary appearing to her on numerous occasions at Lourdes.

A shrine was built there, and so started a series of miraculous healings credited to the spring water at the site. Although many of these miracles have since been debunked, many people claim to have been healed by the water at Lourdes to this day. Bernadette herself died in 1879 of tuberculosis, and she was made a saint.

Her body was exhumed on no fewer than three occasions and was pronounced by the church to be “incorrupt.” In other words, it was fairly well mummified, although there were some areas of decay.[9]

This was not helped by the accidental mishandling of her body during the exhumations, which almost certainly contributed to further deterioration. For this reason, it was decided to cover her face and hands in a layer of wax to hide the worst of the decay. She can still be seen at the Chapel of Saint Gildard in Nevers. 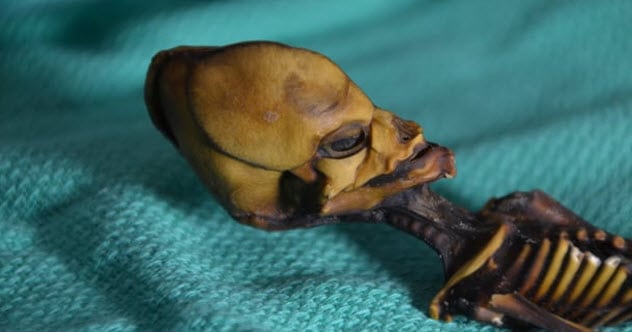 Perhaps the most bizarre of all the mummies on our list, the tiny Atacama “alien” mummy has one of the most tragic stories. The remains are only 15 centimeters (6 in) long and were found in the Chilean Atacama Desert.

Although humanlike in appearance, the little mummy had various dramatic malformations, including fewer ribs than usual and a distinctive, cone-shaped skull. This led to wild speculation about its origins, with many people believing it may even be proof of alien life.

However, examination of the Atacama mummy’s genes has shown that it was a human female child with genetic abnormalities that caused her unusual and striking appearance. Sadly, it appears that she was probably a stillborn fetus, and it is estimated that she died around 55 years ago.[10]

Although her story has a sad ending, it is hoped that information learned from studying her genes may help other people with genetic conditions in the future.

Read more intriguing stories about mummies on 10 Facts About Ancient Egyptian Mummies You Didn’t Know and 10 Mummies With Mysterious Stories To Tell.