Food is perhaps one of the most important things in our lives. While some look at it as just a means with which to continue living, others look at it as an art, a reason to broaden their culinary horizons.

Whether they view food as nourishment, exploration, or a medium for socialization and bonding, few people spare much thought for where the items in their fridge came from or what history may be behind them. They’ve simply always been around, right? Here are ten common foods and their origins. 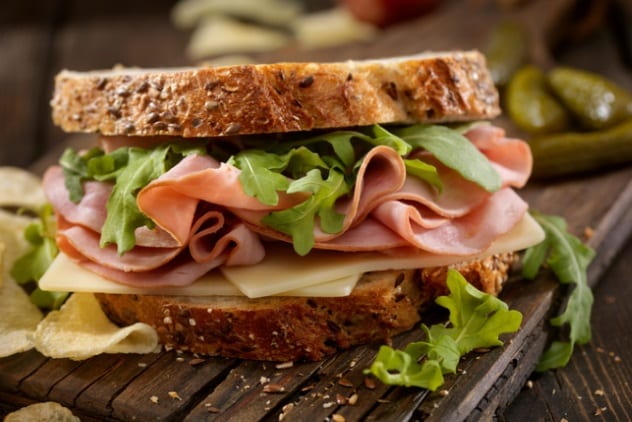 Perhaps the most famous, and maybe most contentious, food origin story, the “invention” of the sandwich has traditionally been credited to John Montagu, the fourth earl of Sandwich. Montagu, an 18th-century British aristocrat, is said to have had a tremendous gambling problem, one so severe that he often refused to get up from the card table for hours.[1] He then called to his chefs, asking them to put some beef between two slices of toasted bread. Culinary history was never the same.

Whether or not that anecdote is true, where did Montagu get his inspiration? Perhaps the answer can be found in the Mediterranean, where the earl often traveled. Turkish and Greek cooks often served mezze platters, groups of appetizers where different foodstuffs could be “sandwiched” between (or on) layers of bread. Another possible answer can be found in the first-century-BC Jewish religious leader Hillel the Elder, whose eponymous foodstuff, known as the Hillel sandwich, consisted of a number of different spices, nuts, and fruit placed between two matzos. When it comes to the origins of the sandwich, much like how many licks it takes to get to the center of a Tootsie Pop, the world may never know. 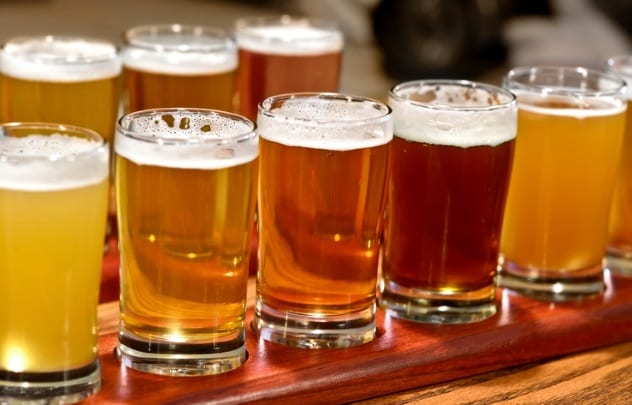 While the first known alcoholic beverage came from China, a 9,000-year-old recipe of rice, honey, and fruit, the first drink we could reliably call beer originated in ancient Sumeria.[2] Ceramic vessels dating back to 3400 BC have been found with beer residue still detectable. In addition to that, a recipe was found in a hymn to Ninkasi, the Sumerian goddess of beer, dating back to 1800 BC. (The hymn reads like an instruction manual on how to create beer, in addition to the recipe.)

Beer was said to be as popular as it was in ancient Sumeria because it was seen as a safer alternative to drinking water, which was often contaminated by the waste of their farm animals. Some scholars actually attribute the Neolithic Revolution, the wide-scale transition of humans to an agricultural life rather than a hunter-gatherer one, to our ancestor’s unquenchable thirst for beer. One researcher found that nearly all ancient societies which consumed beer often attributed the creation to a female goddess. 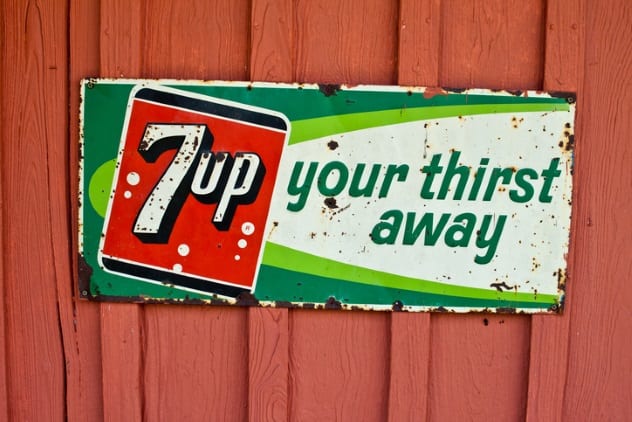 In 1890, Charles Leiper Grigg moved to St. Louis, Missouri, in order to work in the advertising field. Various business partnerships introduced him to the soda industry, a field to which he decided to dedicate his life. His first invention was an orange-flavored drink called Whistle, and his second was another orange soda called Howdy. However, neither could compete with the behemoth known as Orange Crush.

Eventually, he decided to switch his focus to lemon-lime flavors, a decision which would change Grigg’s life forever. Originally known as Bib-Label Lithiated Lemon-Lime Soda, 7 Up originally contained the mood-altering drug lithium.[3] Created in 1929, the soda contained the chemical up until 1950, when research began to show it had potentially dangerous side effects. As for the name, many people erroneously believe it had something to do with the number of ingredients or the original size of the bottle, which was seven ounces. However, the truth has never officially been resolved, as Grigg took the secret to the grave. The most probable explanation is that he saw cattle branded with a mark which looked like “7UP,” and he decided he liked it. 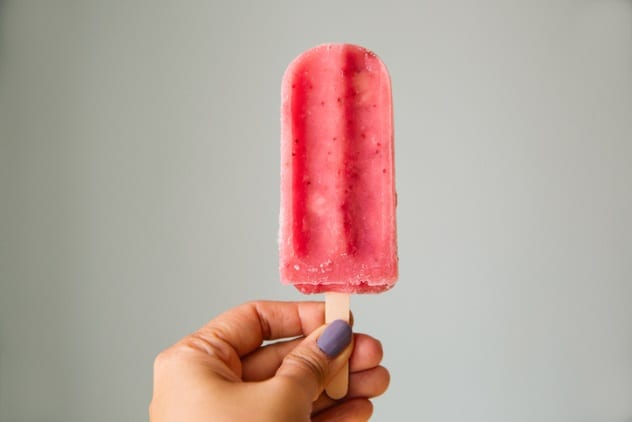 In 1905, in the city of Oakland, California, a young man named Frank Epperson is said to have left a glass of water on his porch overnight. Also inside the glass were powdered soda mix and a wooden stick with which to stir the mixture. When he grabbed the glass in the morning, he found it was frozen solid.[4] For years, Epperson delighted his friends and family with the concoction. Someone eventually convinced him to file a patent for his idea, which he finally did in 1923.

Up to that point, he had referred to them as “Eppsicles,” but his children convinced him otherwise, telling him to use the name they had used: “Pop’s ‘sicles.” Immediately successful, they debuted for five cents apiece. A few years later, Epperson sold his patent to the Joe Lowe Company. Since then, they’ve reached a level of ubiquity reached by various other trademarks like Band-Aids or Kleenex, in that all ice pops are referred to as Popsicles, whether or not they’re the genuine article (at least in the US). 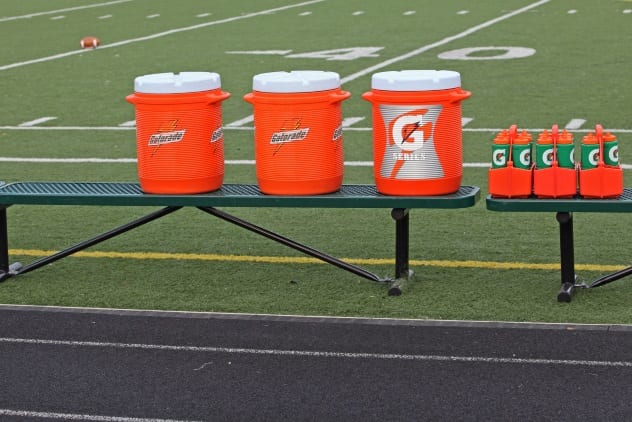 During the early summer of 1965, an assistant coach at the University of Florida noticed his players were incredibly susceptible to heat-related ailments.[5] To remedy this problem, he turned to researchers in the University of Florida College of Medicine. They found that the players were losing electrolytes through their sweat and that the carbohydrates they used for energy were not being replaced. Their solution was to invent a carb-based beverage to account for those losses.

Initial testing went awry, as the prototypes “tasted so like seawater that players promptly threw it up.” Lemon juice was quickly added, at the behest of the creator Dr. Robert Cade’s wife. Since the University’s mascot was the Gator, Cade called his invention Gatorade. (It was initially going to be called “Gator-Aid” but they decided the “Aid” suffix made it sound too much like a medicine.) The first year it was used, the football team went 7-4, results which were attributed to the energy they received from the drink. Subsequent seasons were even better, with the Gators winning their first Orange Bowl the following year. 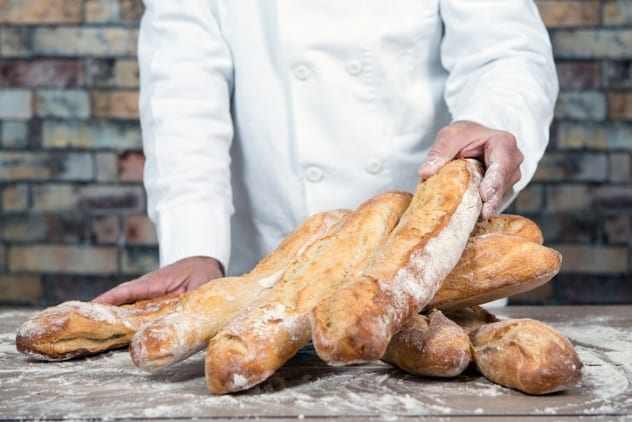 One of the most stereotypically French foods, surpassed perhaps only by escargot, the baguette is a long, thin loaf of bread. The word translates as “wand” or “stick,” and is a reference to the traditional shape of the bread. Though the usage of the word “baguette” to refer to the bread only dates back to 1920, the bread itself dates back much further.

Of all the theories regarding its creation, one of the more probable involves the Austrian officer August Zang, who is also credited with introducing Vienna bread and the croissant to France.[6] Zang also brought the first steam oven to France in the early 19th century. The most improbable theory is that Napoleon Bonaparte asked his chefs to come up with bread his soldiers could fit down their trouser legs. 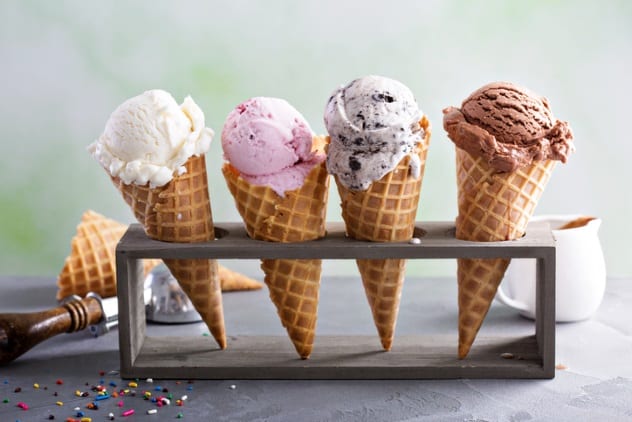 The first ice cream cone ever produced was created by an Italian named Italo Marchiony in 1896. (He was even granted a patent for an ice cream cone machine in 1903.) However, the man who popularized them was a Syrian named Ernest Hamwi, whose brush with fame began at the 1904 World’s Fair in St. Louis.

The Hamwi story is as follows: He was selling waffle-like pastries known as zalabia and was located right next to an ice cream vendor.[7] Due to his booth’s popularity, the ice cream vendor quickly ran out of dishes with which to serve his treats. Thinking quickly, Hamwi rolled one of his wafer-like waffles into a cone shape and gave it to the ice cream vendor. After that, ice cream was never the same. Hamwi later capitalized on his fame and created the Missouri Cone Company, which he opened in 1910. 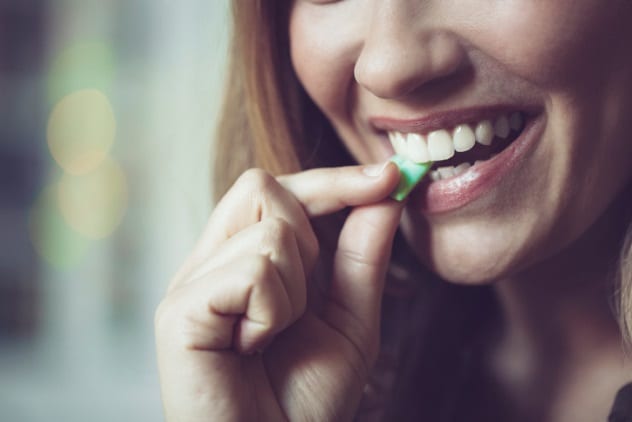 For the idea of chewing on a natural material, we turn to the ancient Greeks, who chewed upon mastic gum for centuries; mastic gum was created from the resin of the mastic tree. (There is some evidence that earlier Europeans were chewing birch bark tar, though the reason for said chewing is up for discussion.) The modern chewing gum can trace its origins back to Native Americans, who practiced the chewing of spruce tree resin, which they taught to European settlers.[8]

A man named John Curtis decided to commercialize the process in the late 1840s. He boiled resin and then cut it into strips to sell. (To keep the pieces from sticking together, they were coated in cornstarch.) However, spruce tree resin had a number of problems, chief among them being that it didn’t taste very good. The next step in the evolution of chewing gum came from Mexico, where the Aztecs (and Maya before them) had chewed on chicle, a substance derived from the sapodilla tree. This became the main ingredient in chewing gum, until it was replaced by synthetic ingredients by the mid-1900s. 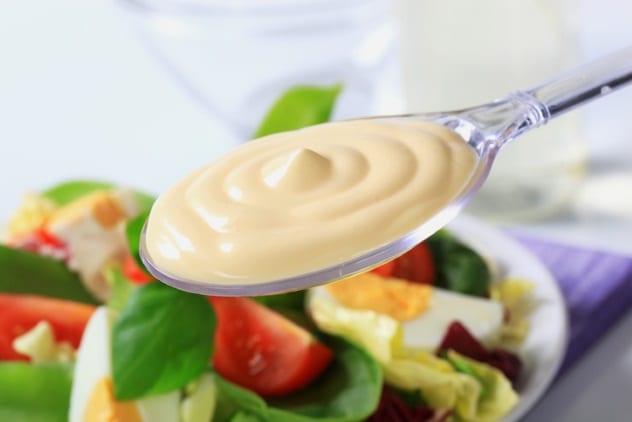 Though its origins are debatable, the most probable is that mayonnaise was a creation of the Catalan-speaking residents of Port Mahon, on the Spanish island of Menorca. (There, it was known as salsa Mahonesa.) Other arguments are made for a French origin, with some giving it to the chef of the French commander of the forces which took Port Mahon in 1756, during the Seven Years’ War.

Later, revisionist historians felt a “Frencher” origin was needed and claimed mayonnaise was originally called bayonnaise, after Bayonne, a famous French food town.[9] In his 1808 Manual for Hosts, cookbook author Alexandre de La Reyniere said that bayonnaise “refers to a town where nothing’s renowned for its good food.” Perhaps both towns just came up with mayonnaise independently of each other, as it probably evolved from aioli. 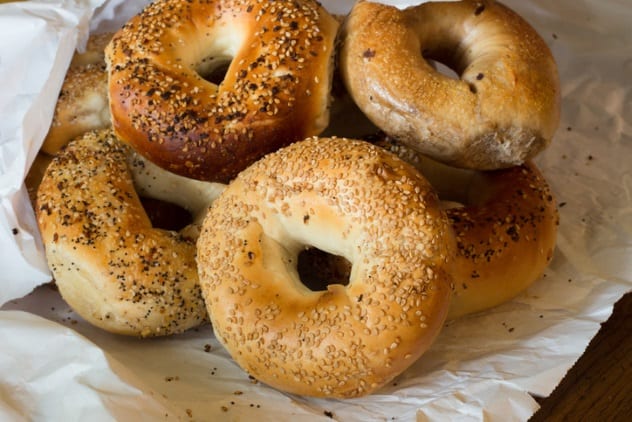 More likely than not, the modern bagel can attribute its origins to Poland. Written records talk about a Polish round roll with a hole in the middle known as an obwarzanek, which evolved from German breads brought to the country by immigrants during the 14th century. They became increasingly popular after Queen Jadwiga gave up fancy breads for Lent and chose to eat obwarzanek.

They really took off in the 17th century, once King Jan Sobieski allowed people other than the Krakow bakers to bake the bread.[10] The foodstuff’s association with Judaism also stemmed from this time, as Poland was one of the first countries in Europe to treat Jews with what passed as respect in those days. (Some local bishops still told their parishioners to abstain from eating Jewish-made bagels, as they were alleged to contain poison.)

Read more about the origins of various foods on Top 10 Foods That Were Invented By Complete Accident and 10 Foods That Aren’t From Where You Think.