From storybook snowcapped mountains to the poles, Earth’s cold spots make for an interesting experience. Ski antics and monster sightings aside, ice fields can produce things that scientists have never seen before, clues about history, and even far-reaching disasters that are born in the Arctic.

Tourists travel to remote places to witness fantastic events, while icebergs and shelves behave in ways that scientists cannot explain. But the frozen depths can also hold some of the most terrifying discoveries and disappearances in the natural world. 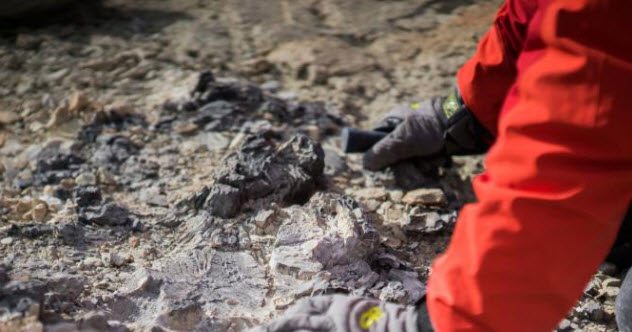 Today the world’s largest desert, Antarctica’s frozen fields kept a piece of important history. When it was still attached to the mega-continent called Gondwana, Antarctica was green and humid.

Then, millions of years ago, a mysterious extinction swept 90 percent of all species off the planet. Known as the Permian extinction, scientists suspect a volcano is to blame but do not know the details of the disaster’s progression.

When five new fossil forests were recently discovered in Antarctica, they were unlike any other found before. What little scientists know about the Permian smash comes from marine fossils. But for the first time, the event could be studied on land. The forests grew before, during, and after the catastrophe.

The discovery is new, unearthed late in 2017, and requires more study to understand how these ecosystems weathered the great extinction. In time, the gnarly wonders may help explain what drove the extinction on land and settle the debate on how long it lasted. Current views swing between 15 million and 20,000 years.[1] 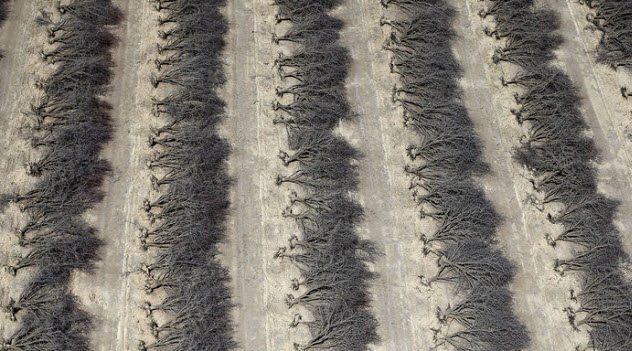 The 2012–16 California drought was so bad that fish baked to death and boats sat at the bottom of dry lakes. Such brutal extremes have long been linked to carbon dioxide’s role in toasting the planet. The more it rises, the more global warming causes cranky weather.

In 2017, scientists kept CO2 constant in a simulated world and fooled around with the poles. They found something surprising. The California drought could have been caused by ice vanishing from the Arctic Ocean.

When ice dropped below a certain amount, the region failed to adequately reflect the Sun’s heat. Within 20 virtual years, it dialed up the temperature near the equator’s northern waters. This, in turn, drove rainy weather past California and into the Pacific Northwest.[2]

This was similar to an atmospheric ridge that hung in the north Pacific during the drought and also swung storms away and to the north. The effect that Arctic melting has on distant southern weather is a newly identified atmospheric process. Wholly independent of global warming, it could bring more frequent repeats of the 2012–16 drought as Arctic ice continues to melt. 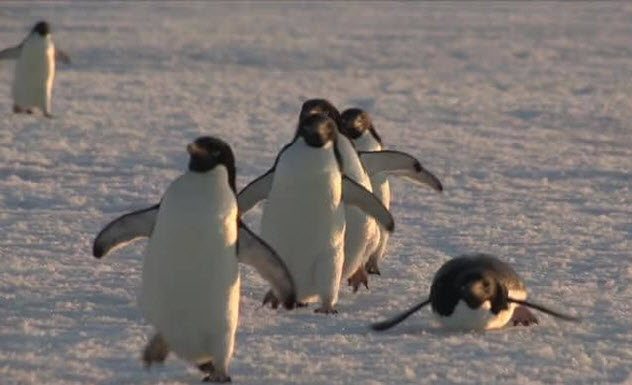 Not many floundering species get the chance to bump up their numbers almost overnight by 1.5 million. In 2018, scientists announced the discovery of a mega-colony of penguins in Antarctica’s Danger Islands. They were a noisy bunch of Adelie penguins, a medium-size species that has lost over 70 percent of its global flock.

The new throng unexpectedly turned up during a satellite survey of the islands’ first bird census. When the data was first analyzed, researchers thought the numbers were faulty. But when they went onshore, it was hard to unsee the 750,000 breeding pairs that greeted them. It was the highest cluster in the region and the third- and fourth-largest colonies in the world.

Global warming continues to mow down their numbers elsewhere, but the nine islands are relatively stable and will remain so for some time. In addition, the remoteness and dangerous sea ice prevent human interference. The busiest island is Heroina Island where perhaps one ship docks every year.[3] 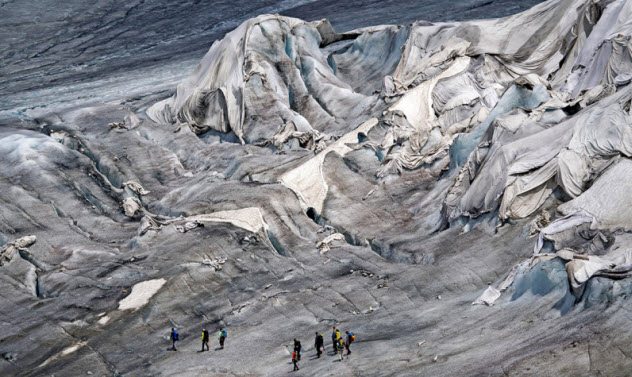 Strange as it sounds, there are glaciers in the Swiss Alps that get tucked in every summer. One of them is the impressive Rhone Glacier. When the time comes, a team hikes through several mountains. Their luggage includes food, tools, and enormous white blankets.

Soon, the glacier disappears beneath the covers in what looks like a really strange local custom. Instead, it is an attempt to stop the melting. Though any white surface, such as the sheets, will reflect the Sun’s heat, it cannot fight it off completely. The glacier’s retreat will slow down but not cease completely as hoped.

On a warm day, it still shrinks 10–12 centimeters (4–5 in). The reason that the Swiss carpet their natural wonders is not entirely environmental. The disappearing glacier is threatening a real and profitable tradition. Since 1870, tourists have flocked to the area to visit the artificial ice grotto carved every year. From the beginning of this cold attraction, Rhone has already retreated 1,400 meters (4,600 ft).[4]

6 Mystery Of The Ross Ice Shelf 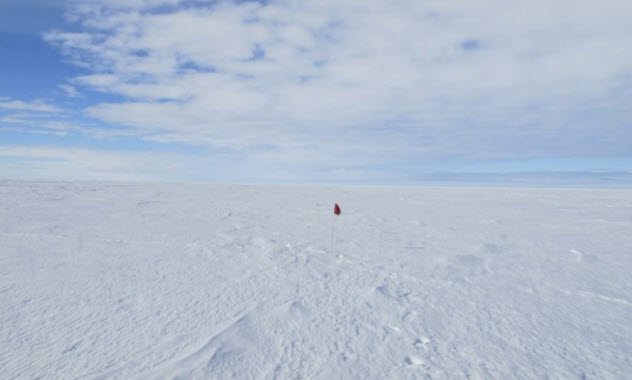 Every family has an oddball. When it comes to the clan of melting structures in Antarctica, the strange kid is the Ross Ice Shelf. At first, it posed as normal, warming just like the rest. In 2017, scientists noticed pieces falling off and believed that it was indeed melting. A team then boarded the biggest floating shelf in the south to drill a hole for testing.

The results floored the researchers. Unexpectedly, the Spain-sized shelf was busy freezing. It was not the only thing that could not be explained. The inside surface of the shaft should have been smooth from being drilled with boiling water. Instead, the interior was made up of jagged ice crystals.

This unusual shelf is a good thing in a world facing a catastrophic rise in ocean levels. Indeed, if Ross and four other southern ice shelves disintegrate, ships would travel up to 3 meters (10 ft) higher than they used to.[5] 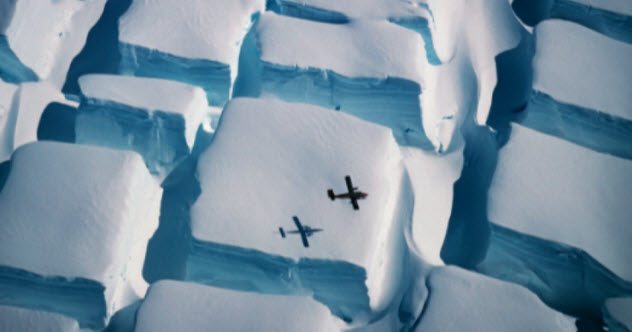 It was the photograph that walked away with the first prize at the 2017 Royal Society Publishing Photography Competition.

In 1995, an ecologist snapped the huge blocks from the air near the English Coast of the southern Antarctic Peninsula. The ice blocks resemble sugar cubes arranged in a pattern not normally seen in nature. What people see, in fact, is an illusion.

The ice is there, but the cubes do not rise as the three-dimensional blocks that won the prestigious competition. Far from being stationary towers, the ice is on the move—and fast.

The floating sheet is being stretched in two opposite directions, and these forces are behind the strange grid. The horizontal lines result from the side-to-side pulling. Vertical cracks form from top-to-bottom stress. The deep troughs then run through each other and produce the squares.[6]

Also mysteriously avoiding the melting trend is the Perito Moreno glacier. Located in a national park in Argentina, it does more than just defy global warming. A massive arch grows for 2–4 years before collapsing into the water below. Then, from white and blue ice, a new bridge starts growing and the whole cycle repeats.

The moment the structure falls is such a spectacle that tourists hold vigils in March just to witness it. The reason why it keeps falling down is due to an interesting process.

The Perito Moreno glacier does experience some melting, which then drains into the lake below the arch. As the water level rises, the lake hollows out the glacier. This tunnel weakens the structure’s integrity until it eventually disintegrates.[7] 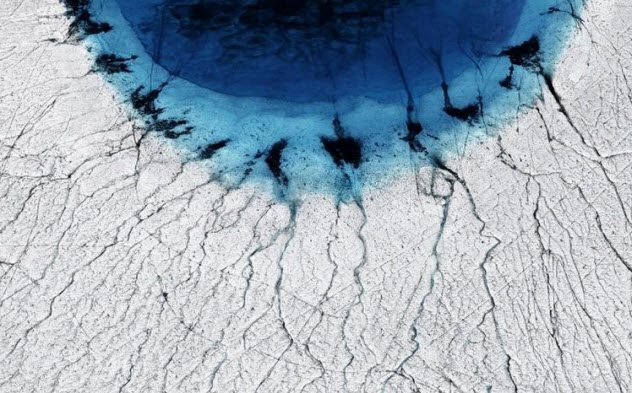 In 2006, scientists witnessed an astonishing sight. In barely two hours, a lake drained away into the earth. This was no puddle. The lake in question held 45 billion liters (12 billion gal) of water.

The unusual phenomenon repeats each summer in Greenland. Every year, melting snow spawns thousands of lakes. They only remain stable for a few weeks before suddenly vanishing. The thirsty culprit is a vast sheet of ice below. As soon as temperatures rise, a network of cracks opens and then swallows huge lakes at astonishing speeds.

In 2018, researchers announced that the trend had taken a worrying turn. The underground web was increasingly gulping lakes inland, even those thought to be too far away to be affected. Once again, rising temperatures are to blame. As summers get hotter, the fissures spread.[8]

It becomes a game of dominoes. One lake’s water drains in a powerful surge and weakens the neighboring lake beds. New cracks form, and more lakes fall and destabilize their neighbors. One such chain reaction lasted five days and drained 124 lakes. Most of the water ends up in the ocean and is responsible for annually raising global sea levels by 1 millimeter (0.04 in). 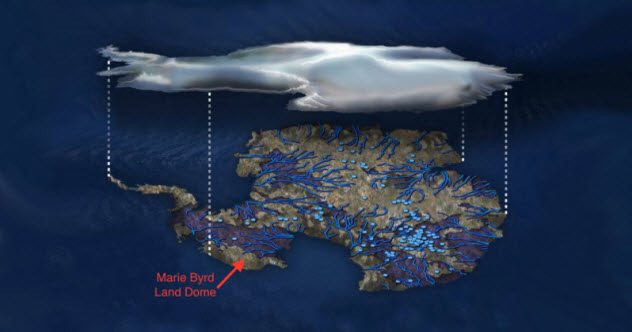 A patch of Antarctica is warmer than it should be. For a long time, it was suspected that a magma plume was responsible. In 2017, it was confirmed. After studying the abnormal heat readings and physical changes in the land, scientists realized that the plume was gigantic and strained against a thin crust.

Located at West Antarctica’s Marie Byrd Land, the fiery column is nowhere near the border of a tectonic plate, which is normally where magma gathers. The plume sits below 2 kilometers (1.2 mi) of ice and is not a recent formation.

Remarkably, it began 50–110 million years ago. This makes it older than the human race and the West Antarctic Ice Sheet. As such, it has always been a part of the region’s geology and cannot be blamed for the recent melting experienced by the sheet.[9] 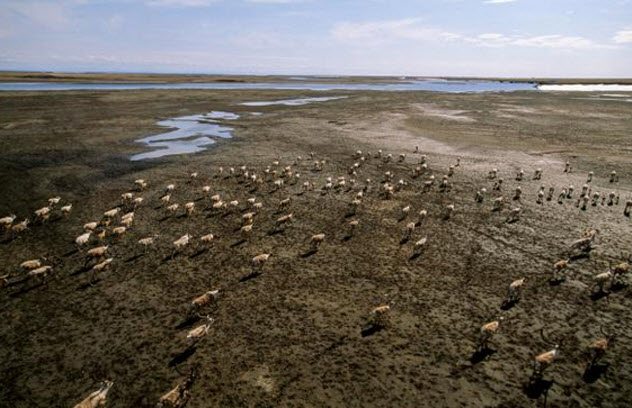 The dangers of global warming do not only affect melting ice and rising oceans but also what the melting releases into the seas. Recently, mercury was detected deep inside the Arctic’s ice. Tons of it.

Mercury is a poisonous heavy metal, but what made it so scary was that the melting permafrost could release the toxin. Inevitably, some will pollute the food chain. Mercury accumulates in fish and animals and, if consumed by humans, could have dire effects.

Before this discovery, scientists thought permafrost held little to no mercury. The sobering truth came when calculations estimated around 56 million liters (15 million gal) of the stuff. This makes it the biggest mercury stockpile in the world.[10]

It appears to have been deposited over thousands of years by currents and winds. While frozen in the depths of the Arctic, the toxin remained harmless. But thawing ice means that some will seep into the ground and get absorbed by plants and bacteria. Part of the mercury will also end up in the water and atmosphere.

Scientists are not sure when this disaster will strike or how much mercury could spill into the food cycle. Nevertheless, they agree that the event will have global repercussions for humans.

For more fascinating stories about frozen places, check out 10 Intriguing Mysteries Of The Arctic and 10 Fascinating Wonders Of Antarctica.