If anything happened in the news over the last few days that might put a smile on your face, you will probably find it on this list. For the weirder stuff that is likely to bemuse or astound you, check the offbeat list as well.

We have quite a few touching animal stories this week. There’s talk of a hero pit bull, an elusive black leopard, and the adorable pairing of a beagle and a possum. Then there’s also the oldest-known wild bird in the world which became a mom for the 30-something time. 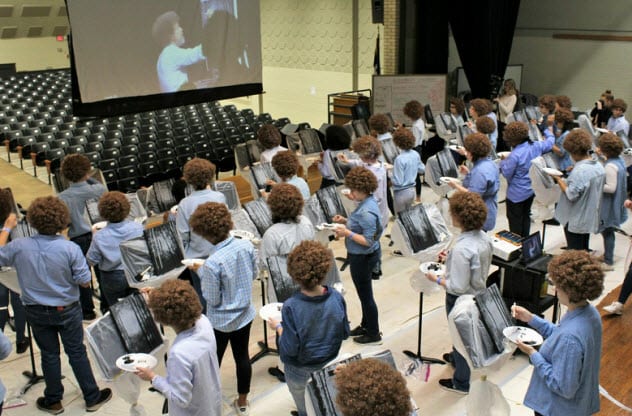 Ross started presenting The Joy of Painting in 1983. The show ran for 11 years on PBS, and its host became well-known for his Afro, his calm and soothing voice, and his overall friendly demeanor. It was a far cry from the two decades that Ross had spent in the Air Force as a mean sergeant who screamed at cadets to “scrub the latrine.”

Bob Ross died in 1995. He has experienced a resurgence in popularity over the last few years as the Internet made his show easily accessible and a new generation was exposed to his wholesomeness.

That’s how art teacher Brady Sloane from Madison Middle School in Abilene, Texas, got the idea for a Bob Ross flash mob to reward Advanced Placement students who were stressed out over grades and projects.

Around 50 kids donned wigs and button-down blue shirts and grabbed their palettes of paint to create some “happy little accidents.”[1] 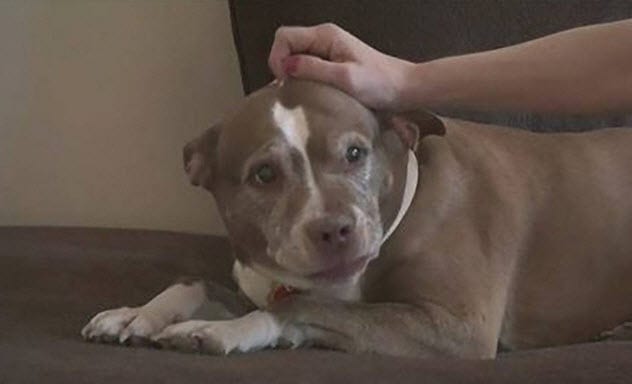 Sadie the 11-year-old pit bull escaped her home and brought police back to her house where they detected a gas leak.

One afternoon, residents of a quiet neighborhood in Westchester County, New York, were disturbed by a commotion caused by one dog roaming the streets and barking loudly. Eventually, someone called the authorities. When police showed up, Sadie took off.

Making sure they were still following her, the dog led officers through several streets all the way back to the house where she lives with Serena Costello and her four-year-old daughter. There, police were quickly able to smell gas. They called in the fire department who detected a leak in the basement.[2]

According to authorities, the leak could have caused an explosion. Sadie’s early detection likely saved her and her family. This was the first time in 11 years that the pit bull had run away from home, and the inside of the house showed signs of her determination. There were bloody claw marks as Sadie had to dig out a blocker under a sliding glass door to make her exit. 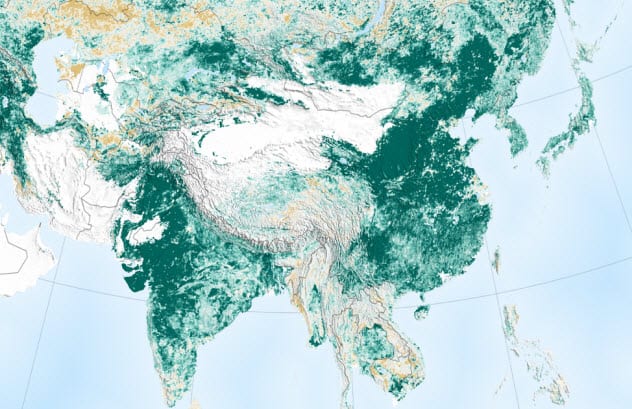 A new study from Boston University published in the journal Nature Sustainability used data from NASA to show that the planet is greener now than it was 20 years ago.

Most environmental news seems to be doom and gloom, so it’s good to learn about something positive every now and then. Research showed that the Earth has seen a 5 percent increase of green leaf areas compared to the early 2000s, or roughly 5.18 million square kilometers (2 million mi2) of added greening per year.[3]

This insight comes to us courtesy of the Moderate Resolution Imaging Spectroradiometer (MODIS). It is a NASA instrument which has been aboard two satellites orbiting our planet since the mid-1990s. It can provide information regarding Earth’s vegetation down to a level of 500 meters (1,600 ft) on the ground.

Perhaps even more surprising are the main sources for the greening of the planet: China and India. Both countries have seen significant increases in vegetation thanks to ambitious foresting programs and intensive agriculture. 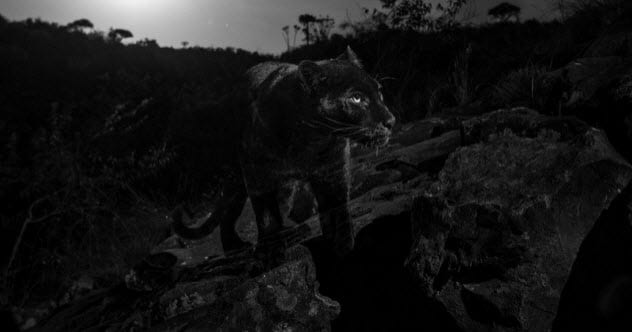 A wildlife photographer snatched a photo of the exceedingly rare wild black leopard, possibly for the first time in over 100 years.

British shutterbug Will Burrard-Lucas traveled to the Laikipia Wilderness Camp in Kenya after hearing reports of sightings of the elusive creature. Such tales are not unheard-of throughout Africa, but the last time someone managed to obtain confirmed photographic evidence was in 1909 in Addis Ababa, Ethiopia. The chances of Burrard-Lucas being the one to obtain a new snapshot were remote, to say the least.

Nevertheless, the wildlife photographer went to Africa and set up his camera traps. The first few days yielded no results. But one morning, he was scrolling through photos taken the previous night and saw a pair of eyes surrounded by darkness.[4] He had managed to capture multiple images of a leopard whose coat is sooty black due to a pigment adaptation called melanism.

Around the same time, a team of researchers from San Diego Zoo Global traveled to the wilderness camp and managed to capture video footage of a black leopard. Their study discusses both their findings and Burrard-Lucas’s photos.

The claims that these images are the first in over a century have been controversial. A Kenyan newspaper photographed a black leopard in 2013. But study lead author Dr. Nicholas Pilfold says that the animal was not wild and was brought from America as a cub. Another picture from 2007 has recently resurfaced in light of recent events. If genuine, it would predate them all. 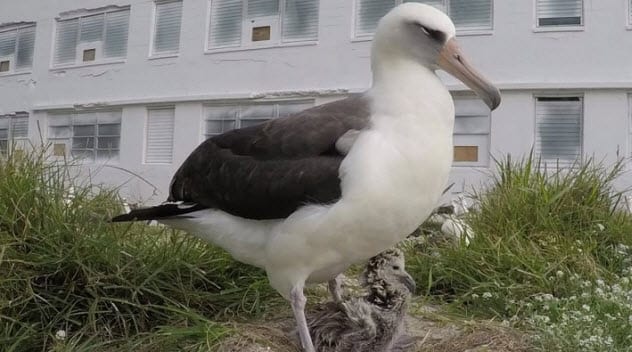 The world’s oldest-known wild bird has become a mother again at age 68. Wisdom the Laysan albatross laid an egg back in December, and it hatched earlier this month.

Laysan albatrosses mate for life and only lay one egg per year at most. Since 2006, Wisdom and her partner, Akeakamai, have visited the wildlife refuge center on Midway Atoll in the North Pacific Ocean during mating season.[5]

According to US Fish and Wildlife, she has raised at least 31 chicks and now has No. 32 to look after. The baby albatross will spend five to six more months in the care of mom and dad before flying out to sea, where it will spend most of its life.

The average life span of the Laysan albatross is 50 years, but Wisdom is at least 68 years old. She was banded in 1956 when she first came to the breeding site on Midway Atoll. As she was ready to mate, scientists estimated that Wisdom was five to six years old. But she could have been older. 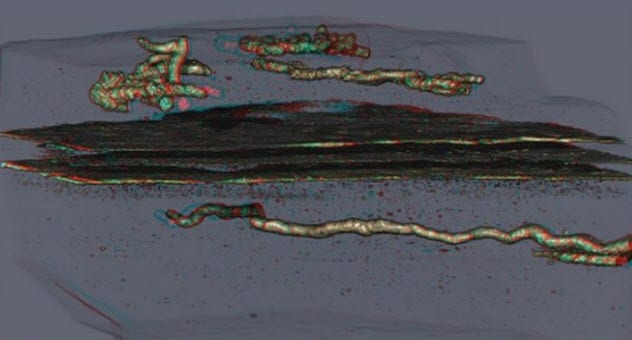 There have been many notable discoveries in recent times, but scientists are currently excited over a trail of mucus. That’s because this trail is around 2.1 billion years old and represents the oldest-known evidence of mobility.

Researchers made the discovery in the Franceville basin in Gabon. The area is a black shale province and contains remarkably preserved fossils. A few years back, scientists found there what they believed to be the earliest signs of multicellular life informally referred to as the “Gabonionta.” Now they have uncovered fossilized tracks which show how these primitive marine life-forms moved through the mud.[6]

The tricky part was examining the fossils without destroying them as the tracks were only a few millimeters wide. Scientists used X-rays to image them and then recreated them in 3-D.

They were surprised to find that the tracks were both horizontal and vertical. The horizontal ones were to be expected as the ancient creatures pushed themselves through sediment. However, vertical tracks suggest that the Gabonionta had a more complex system of mobility than expected. 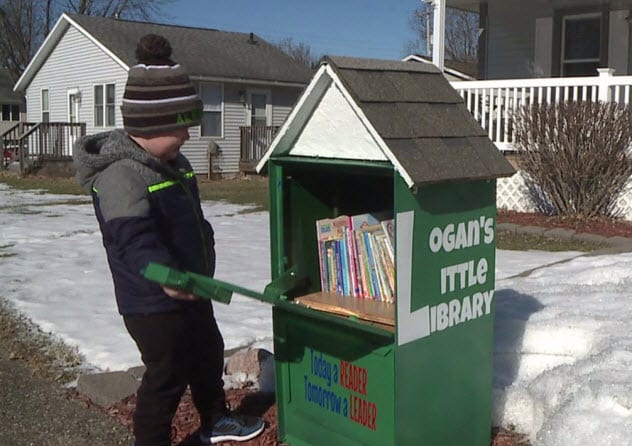 Some kids set up lemonade stands in their yards, while others might prefer tree houses. Logan Brinson opened a library.

Logan is just five years old, but he loves to read. Unfortunately, his tiny village of Alpha, Illinois, did not have a library, so he decided to start one himself. Last summer, he and his parents met with town officials and proposed to organize a lending library.

That’s how Logan’s Little Library came to be.[7] Installed in front of the Brinsons’ home, the library is a small, wooden, green-painted house which contains a few dozen books. They are available to readers of all ages as long as they only check out one book at a time.

Logan’s initiative proved to be quite popular with the residents of Alpha. They are now planning to open a second lending library near the gazebo in the town center.

An animal odd couple won over the hearts of Australians after Molly the beagle adopted a baby possum named Poss.

Molly was feeling distraught after losing her litter of puppies during birth, but a new friend jumped into her life. The little marsupial hopped onto the beagle’s back and made herself at home. Molly was a heartbroken mother without her pups, while Poss was a baby most likely abandoned by her own mom. They found each other at the perfect time and formed a symbiotic relationship.

At the moment, the pair is inseparable, which is particularly tricky as Poss is nocturnal. Whenever she feels like a midday nap, Molly stays close by, waiting patiently for her adopted baby to wake up. The beagle’s owners, Elle and Sara Moyle, announced that they have also adopted Poss and will look after the possum for as long as she wants to stay with Molly.[8] 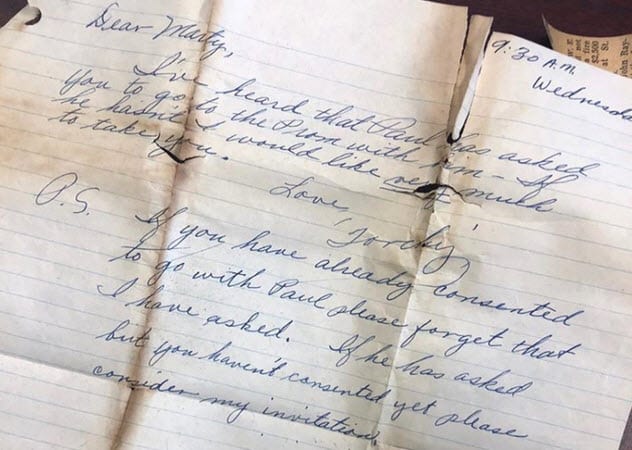 Eighty-two-year-old Martha Ina Ingham was recently reunited with something she undoubtedly never expected to see again: her old handbag from high school. Among other items were letters which told the story of two boys who both wanted to take Marty to the prom.

Back in 1954, Marty was a student at Jeffersonville High School in Clark County, Indiana. The school was closed down in 1971 but was only recently marked for demolition.

Construction workers were removing cabinets from one of the science classrooms when they found the handbag. Inside were items you would expect a teenage girl to carry, such as lipstick and ID cards. There was also a letter from a boy asking Marty to the prom in case she hadn’t already said “yes” to another boy named Paul.[9]

School officials enlisted the power of social media to see if they could track down the former student and return her handbag. Fortunately, Jeffersonville is not a big city. Two days later, they announced triumphantly that Marty had been found. Now all we’re waiting for is an update to let us know whom she took to the prom.

1 A Rose For Valentine’s Day 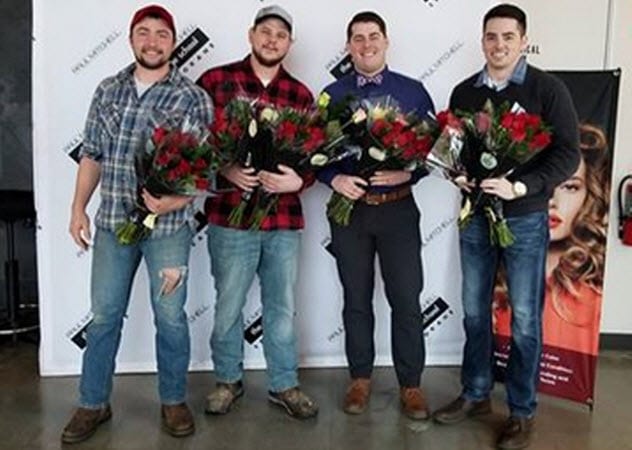 For the past eight years, Seth Stewart and his friends have spent Valentine’s Day delivering roses to widows, military wives, and single women around Spokane, Washington, so they wouldn’t feel lonely.

It all started when Seth and one of his brothers bought two dozen roses to give to their single friends on Valentine’s Day. The community heard of their small act of kindness, and the next year, they received requests.

The tradition got bigger and bigger over the years. In 2019, Stewart hired a group of drivers to deliver more than 550 roses. Now there is a dedicated “Rose Rush” Facebook page to send requests. All roses are free of charge, and every requested recipient gets one. People can even include a personalized message.[10]

No matter how big the operation gets, Stewart has his own personal list of women who have had an impact on his life. He delivers flowers to them personally, and his first four customers are always the same: his mom and his sisters.