European history is littered with stories of executions for various reasons, and beheading was a rather prominent means of putting the condemned to death. It’s a real wonder that anyone survived, considering the frequency of public executions in the 14th, 15th, 16th, and 17th centuries.

There are many a tale of those who quite understandably panicked, begged, struggled, or fought as they were dragged step by step to the executioner’s scaffold, but what about those who met their fate well? Read on to discover ten people who met their makers in one of the cruelest fashions imaginable but managed to stay brave and dignified to the end. 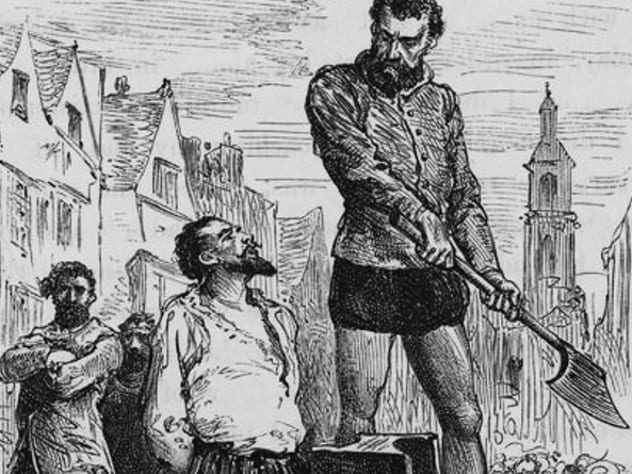 Poor Sir Walter Raleigh was probably dealt a harsh execution sentence in 1618. After being pardoned by the king in 1617, he traveled to South America to search for new land. One of the conditions of Raleigh’s pardon was that he avoid getting involved in any hostilities. Unfortunately for him, one of his commanders attacked a Spanish outpost, and when news got back to England, the Spanish ambassador demanded some form of retribution. King James I had little choice but to have Raleigh executed.

According to reports of the execution, Raleigh said to his executioner, “Let us dispatch,” after being shown the ax that would be used to hack off his head. Other reports suggest Raleigh did not want the crowd to see any sense of fear from him, saying, “If I appear to tremble, I beg that you don’t put it down to cowardice on my part.” After lying his head on the block, he shouted, “Strike, man, strike!” to his executioner.[1] The bravery shown by a man who was largely innocent cannot be denied, and Raleigh’s death remains one of the most unjust executions in our dark history. 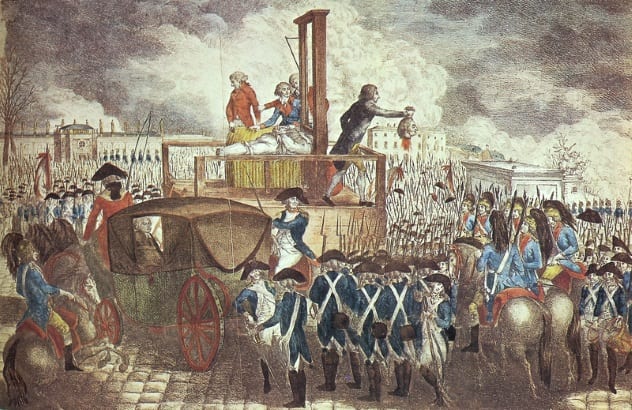 Louis XVI was executed in 1792 as a result of the French Revolution and the abolition of the monarchy in France. His wife, Marie Antoinette, was also famously beheaded as a result. The execution of Louis is not as notorious as the beheading of the young Marie Antoinette, but he was as brave as possible in the face of what must have been terrifying events. According to reports, Louis took his punishment courageously. The last thing he said to his friend Malesherbes was that he would need to control his tears in front of the sea of onlookers.

Reports from the time indicate that Louis exonerated those who had condemned him to death and hoped that his execution would not be a stain on the history of his country.[2] By all accounts, Louis appeared calm and resigned to his grisly fate. After his head was cut off by the guillotine, onlookers were said to have dipped their handkerchiefs in the king’s blood. 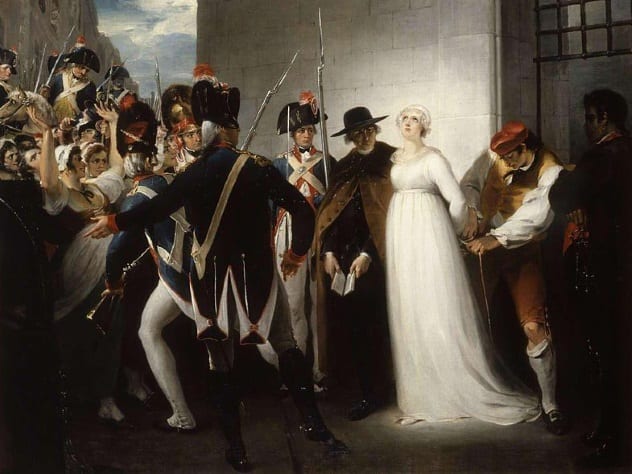 After the overthrow of the monarchy and the execution of her husband Louis XVI in 1792, Marie Antoinette was found guilty of high treason and sentenced to death in 1793. Among the crimes she was accused of were instigating mass orgies and incest with her own son, a crime she vehemently denied. She was relatively young at the time of her death, being only 37 years old. According to reports, Marie Antoinette wore a white dress and endured an hour-long journey on a cart as she was transported to the Place de la Revolution. The crowd is said to have jeered her on this journey.

By all accounts, Marie Antoinette maintained her composure and accepted her cruel fate. Her last words are recorded as being an apology for stepping on her executioner’s toes accidentally, translated as, “Pardon me, sir, I did not do it on purpose.” She was guillotined shortly after. She died having never confessed her “crimes” and wrote in a letter to her sister that her conscience was clear.[3]

7 Charles I Of England 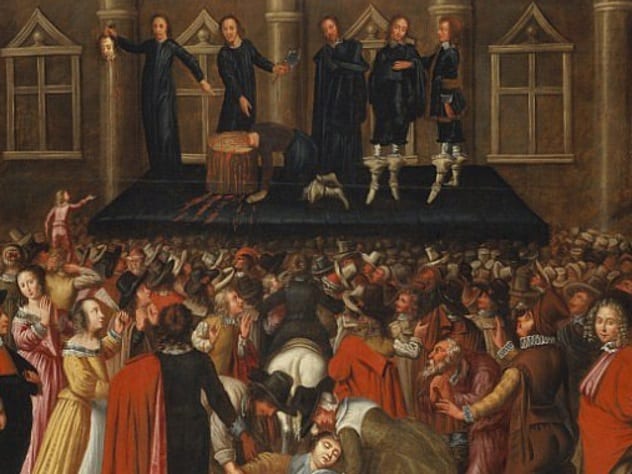 During an 11-year period between 1649 and 1660, the UK existed as a republic state, rather than the traditional monarchy. The monarchy was abolished at the end of the English Civil War, and the sentence for the reigning monarch Charles I was death. The crime was treason. During this period, the leader of the republic was Oliver Cromwell.

On the day of his execution in 1649, Charles asked for an extra shirt to wear so that he would not be cold and therefore shiver. After making his way to the executioner’s block, Charles made his final speech. He then said a final prayer and signaled his executioner to make the fatal blow.[4] According to reports, the executioner only took one stroke to execute him. This was unlikely during the time, with some beheadings taking multiple strokes.

Charles’s son, Charles II, ascended to the throne in 1660, when the monarchy was reestablished. Charles II ordered many beheadings upon restoration, including the deceased Cromwell’s body, which was posthumously decapitated. 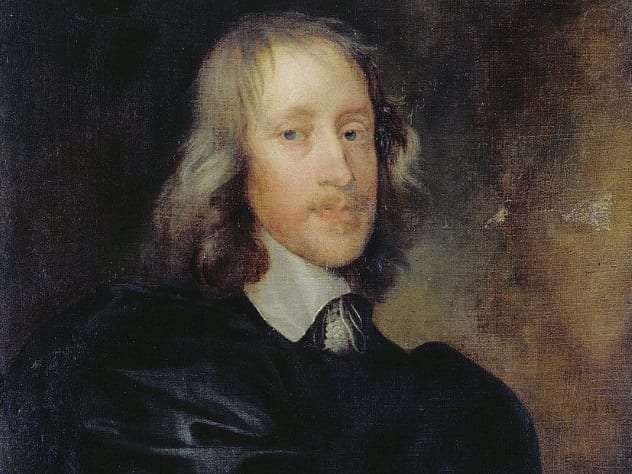 Sir Henry Vane the Younger was a politician during the events of the English Civil War and worked alongside Oliver Cromwell at the time of Charles I’s execution. It is said that he did not approve of the execution. However, upon the restoration of the monarchy and ascension of Charles II to the throne in 1660, Henry Vane was in a critically dangerous position. Although the king granted clemency, Vane ended up being found guilty of treason and sentenced to death.

It took over two years to fully sentence him, as the king’s original grant of clemency made his case more complicated. He was spared the grisly fate of being hanged, drawn, and quartered, instead being given a beheading. While on the execution scaffold, he gave an impassioned speech citing his innocence and loyalty to the king. He even blessed Charles II. According to reports, he showed no cowardice or lack of composure and took his fate well.[5] Perhaps it was a little unjust, considering that he had been against Charles I’s execution a decade earlier. 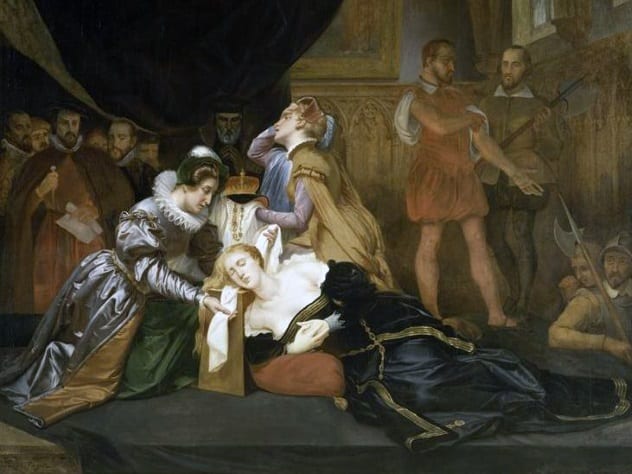 Mary, Queen of Scots, was the queen of Scotland between 1542 and 1567, before she fled Scotland after a scandal involving the murder of her husband. It is believed that Mary was implicated in the murder. After spending years in custody in England, her cousin, Queen Elizabeth I, found Mary guilty of plotting to murder her so that she could ascend to the throne of England. The plan was backed by Catholics, as they wanted to remove the Protestant Queen Elizabeth from power. Mary was caught by an English spy who deciphered one of her letters, thus proving her guilt.

Mary was executed in 1587. According to reports, Mary was courteous while on the executioner’s scaffold and forgave her executioners, who were kneeling and asking for forgiveness. After disrobing (just her outer garments), Mary leaned down onto the executioner’s block, and her final words are recorded as being, “Into thy hands, O Lord, I commend my spirit.”[6] It was said that the first stroke of the executioner’s ax did not strike cleanly, as he was forced to swing again to deliver the decisive blow. It was also noted that when he held up her head afterward, it fell to the ground, and the executioner was left holding a wig. 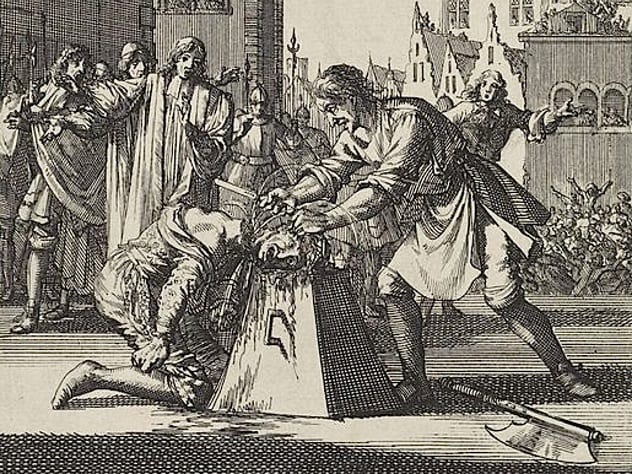 James Scott, First Duke of Monmouth, was actually the son of King Charles II. However, he was born illegitimately, so he was never considered for ascension to the English throne. After his father died in 1685, he led an unsuccessful rebellion against King James II, Charles’s brother. After being caught, he was immediately found guilty of treason and sentenced to death. King James listened to pleas of mercy from his nephew, but they were to no avail.

Prior to being beheaded, Monmouth requested that his executioner finish him with one blow. Unfortunately for Monmouth, the executioner took between five to eight strikes. It is said that Monmouth was moving in the meantime, so it is likely he was still alive until the final blow.[7] The excruciating nature of this death cannot be imagined. By accounts from the time, a knife was used to finish Monmouth. The execution was carried out by a man named Jack Ketch, who is now infamous for the botching. Having faced what is by far the most gruesome execution on this list, Monmouth seemed to have been tough to the very end. 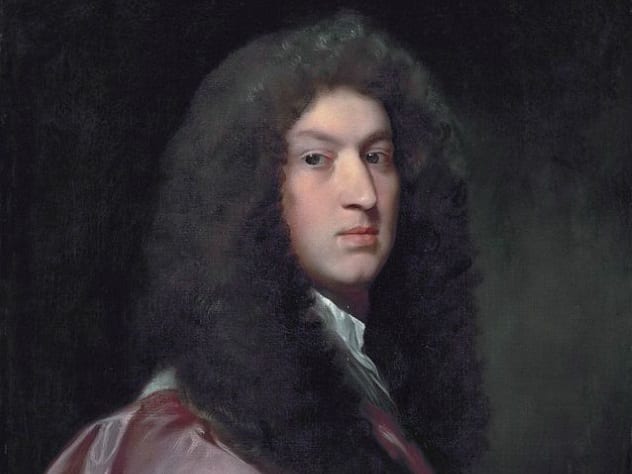 Lord Russell was an English politician during the reign of Charles II. He advocated the return of a Catholic king in James II and was ultimately found guilty after his involvement in the Rye House Plot. This plot was an attempt to ambush Charles II and murder him. After receiving what was an unusually fair trial for the time, Russell was eventually sentenced to be hanged, drawn, and quartered. This was later upgraded to a beheading.

In 1683, William Russell became another victim of the infamous executioner Jack Ketch. By all accounts, the execution was a real disaster, and Russell’s neck had to be hacked at multiple times. After the first blow, Russell was said to have turned to Ketch and retorted, “You dog, did I give you 10 guineas to use me so inhumanely?”[8] Ketch later issued an apology and claimed that Russell “died with more gallantry than discretion.” After the botched execution of Russell and later Monmouth, Ketch was almost himself hanged for such epic public failures.

Robert Devereux was a notable favorite of Queen Elizabeth I and regularly butted heads with Sir Walter Raleigh. By all accounts, he was an arrogant, impulsive man with a flair for the outrageous. After being sent away to Ireland and leading a miserable command in 1599 (in which he made no advancement with a large English army), he was placed under house arrest. He then attempted a coup d’etat against the queen and the government, which failed. He was immediately found guilty of treason and sentenced to death.

Devereux begged to be executed in private rather than in front of a watching crowd; his request was granted. He was executed in the courtyard of the Tower of London in 1601. Devereux said quiet prayers and put his head on the block, spreading out his arms in a sign of contentment. After three strokes of the ax, he was no more. For such a cocksure man, his execution was quiet. Notably, Sir Walter Raleigh watched the execution and would face his own 17 years later.[9] 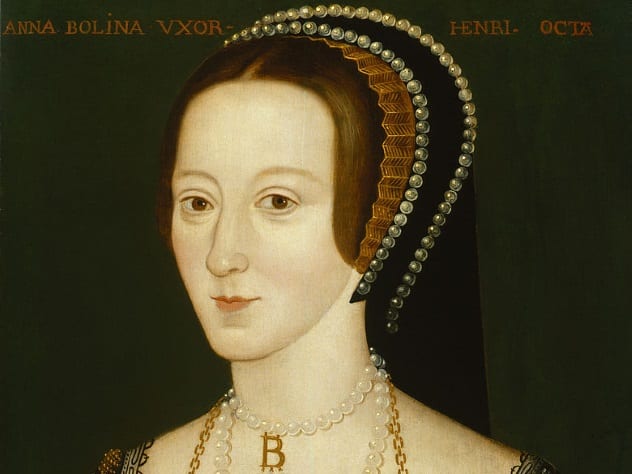 Perhaps the most famous of Henry VIII’s six wives, Anne Boleyn was sentenced to death in 1536. The charges against her were given as adultery, treason, and incest. However, it is well-known that the king had grown tired of her and her inability to bear him a son. After her trial, her sentence was set as a beheading, rather than the traditional burning at the stake for women. Henry VIII arranged to have an expert swordsman come from France.

Prior to her execution, she had shown “joy in death” and was reported to have sworn on multiple occasions that she had never been unfaithful to the king. Upon arriving at the scaffold, Anne Boleyn made a short speech, which was said to have moved the crowd in attendance. She asked them all to pray for her and largely accepted her fate. Her last words prior to the fatal blow are noted as being, “Jesus receive my soul; O Lord God have pity on my soul.”[10] The expert swordsman beheaded the former queen with a single blow.

Read more accounts of condemned souls meeting their fate on 10 Famous Writers’ Gruesome Accounts Of Public Executions and 10 Executions As Told By The Executioners.