You’ll find quirky and unusual restaurants anywhere in the world. From fine dining to fast food, they all try to create a unique experience that will keep their patrons coming back. Most are in traditional shop fronts or purpose-built buildings. With many antiquated buildings being redeveloped, it certainly isn’t unusual to find a restaurant or cafe in an old heritage building or even a disused bank or church.

However, you’ll be amazed at the truly innovative places in which some eateries can be found. Their locations are so unique that they have actually caught on and become growing trends for unusual dining. Some are ingenious, others are a little creepy, and then there are some which are downright hilarious. 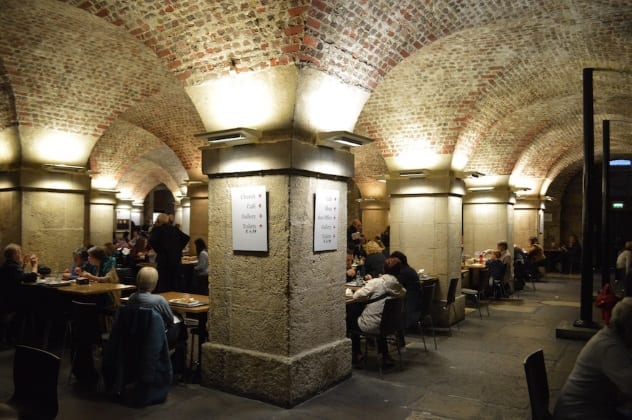 The dark depths of church crypts were traditionally used as burial places. However, in modern times, the coffins in many of these crypts have been relocated, leaving dark, cavernous empty spaces. Parishioners have found inventive ways to use these areas. Many of them have been repurposed as storage, homeless shelters, even army barracks during wars.

However, you’ll be amazed to know that many of these former burial grounds have been transformed into restaurants and cafes. In fact, cafes in crypts seem to be becoming something of a worldwide trend.

Sydney, Paris, and London are among the cities which have successful eateries operating from former church crypts. St Madeline’s in Paris operates a charitable restaurant, providing cheap meals for the elderly and homeless from the dining area beneath the church. The crypt cafe in Sydney’s St James church has grown in popularity from a small courtyard cafe to fine dining in the crypt.

St Martin-in-the-Fields on the corner of London’s Trafalgar Square even has old tombstones lining the floor of their Cafe in the Crypt (pictured above). Artifacts such as an old whipping post and church sculptures are on display as a bit of a talking point, just in case dining in a church crypt isn’t enough to start a good dinner table conversation.[1] 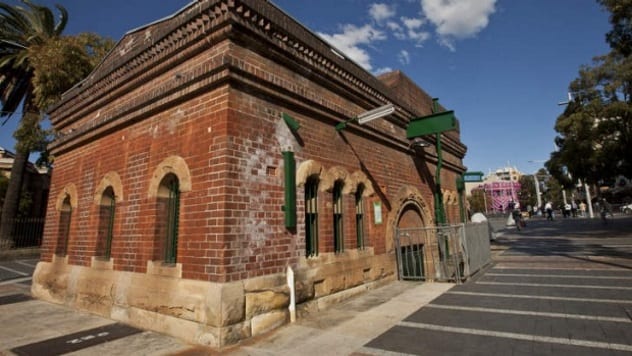 A toilet block is also probably one of the last places you would expect to find a restaurant or cafe. Yet they are another class of disused buildings which are becoming increasingly popular venues for culinary establishments. Buildings that were once seedy, filthy, and covered in graffiti have been given makeovers to become trendy eateries.

A popular burger outlet in Berlin retains the unmistakable tiling from the building’s former days as a public convenience. Maintaining the building’s character, napkins are even dispensed from a toilet roll holder.

In the UK, converting disused water closets into trendy cafes and bars is becoming quite common. A number of smaller towns are turning these old facilities into restaurants in lieu of demolishing the buildings.

In Sydney, the city council has been investigating turning old toilet blocks into cafes. Many of these former restrooms are located in publicly convenient locations, so they make ideal, if not interesting, venues for an eatery.[2] 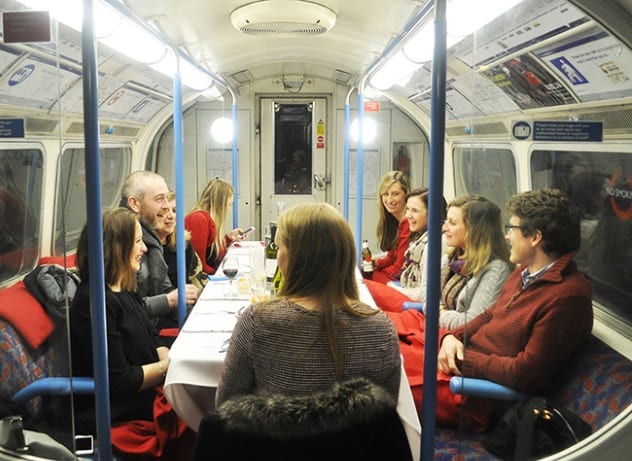 Photo credit: Do It In London

Most modern cities have labyrinths of dark tunnels lurking beneath their streets. Some were used as train and tram routes; others served as war bunkers or drainage channels. They all tend to be dark, creepy places that few would really like to visit.

However, the value of these underground caverns is being recognized, sparking a trend for subterranean restaurants and bars. You might expect to find a coffee shop, fast food bar, or vending machine at the station. But now, restaurant owners are delving a little deeper to provide a unique dining experience.

In Sydney, a project to expand the city’s rail system was abandoned during the Depression years. A pair of St James station tunnels have largely sat idle since then. Inspired by tunnel restaurants overseas, plans are now underway to redevelop these dank tunnels into a complex of bars and restaurants.[3]

In London, you can dine in a decommissioned tube carriage (pictured above), located in an underground tunnel. The original decor of the 1967 carriage has been retained. Diners can enjoy a four-course menu on the carriage, and ticketed events are held on specific dates each year. In Paris, plans are also underway to turn disused Metro tunnels into hip restaurants and bars. 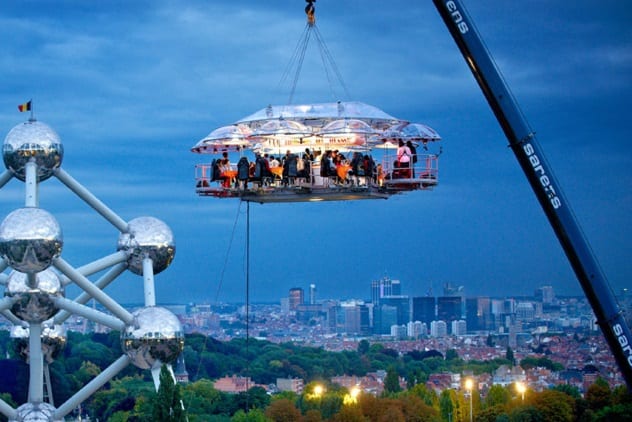 Photo credit: Dinner In The Sky

Fancy dinner on a flying dining table? Yes, that is actually a thing, if you are not afraid of heights.

In 2006, a Belgian communications agency teamed up with an amusement park company, and they came up with a bizarre dining concept, Dinner In The Sky, which has taken off around the world. Up to 22 diners sit on a platform which is then hoisted 50 meters (164 ft) off the ground to enjoy a midair feast.[4]

The concept of a flying feast has taken off, and diners in over 40 countries have enjoyed a sky-high meal. It sounds like an exhilarating dining experience, but just don’t drop your napkin. 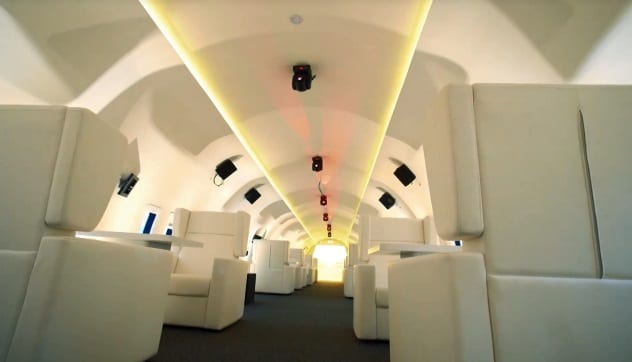 Photo credit: Facebook/Plane In The City

Airline food is renowned for being unappetizing, so a plane is not exactly the place you would look for gourmet cuisine. However, disused airplanes are being repurposed as restaurants. Some offer fine dining experiences, while others provide wacky themed restaurants.

In Malaysia, diners can enjoy a three-course meal in a converted Boeing 737 (pictured above). True to the airline theme, menus range from Economy to Business and First Class.[5] Similarly, in Colorado, you can enjoy a meal on a former US air force jet, while in Costa Rica, you can dine beneath the wings of an abandoned military plane. 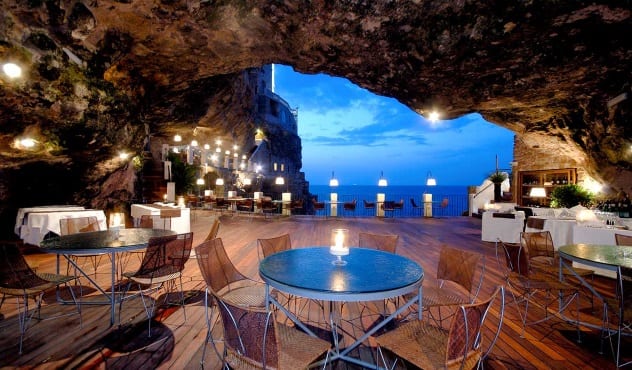 You probably think of stalactites and stalagmites when visiting a cave, or even perhaps diving to discover underwater treasures. Caves have always been popular venues for picnics and parties, and established cave restaurants are a growing trend.

The Grotta Palazzese cave restaurant in Italy is believed to date back to the 1700s, as evidenced by its depiction in a watercolor from 1783. Today, it offers a fine dining experience with a view of the Adriatic Sea.

Along China’s Yangtze River, diners step along an acrophobia-inducing 30-meter-long (100 ft) walkway secured high up a cliff to access a mountain cave where they can enjoy an unusual dining experience.[6] Many Asian holiday destinations are also following the trend for subterranean dining, with luxury cave restaurants popping up near many popular resorts. 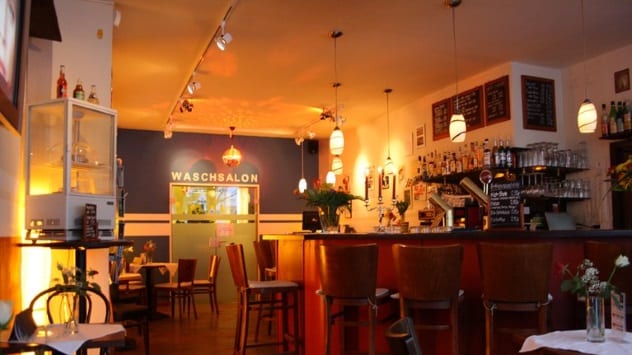 Sunday afternoon at the laundromat is an onerous chore for many of us. However, at least one cafe fad is helping to ease the boredom of wash day.

Restaurants, cafes, and bars in laundromats are now a thing. A number of ingenious laundromat owners around the world are making good use of the time their patrons waste while their weekly laundry goes through its cycle. Gone are the days of vending machine coffee and snacks while you wait for your wash to finish.

The concept first became popular in Germany, where laundromat owners initially began offering barista coffee and snacks to their patrons. The idea soon took off across Western Europe, spreading to the US and Australia. Many these laundromats resemble swish nightclubs and restaurants. Some offer fast food and coffee, others have established bars, and even live entertainment and dance parties are not uncommon among the whirling washtubs.[7] 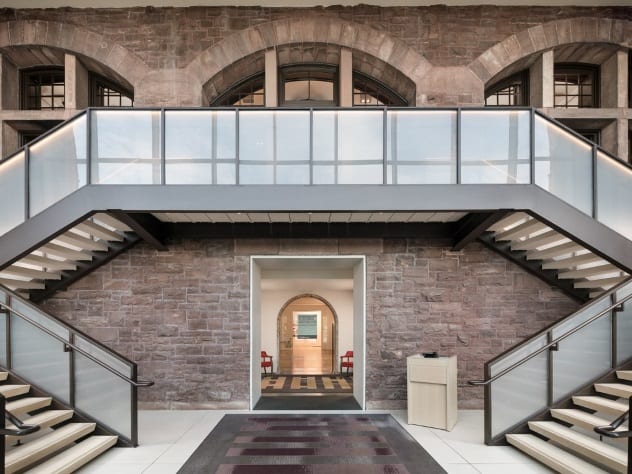 Gone is the dark heyday of institutionalized mental health care, and many large insane asylums now sit abandoned. The very history of these buildings creates a creepy, dark atmosphere. However, their size, architecture, and locations often make them ideal for redevelopment as luxury hotels and restaurants, which is why across the world, many of these grand old buildings have made the transition from hospitalization to hospitality.

New Mexico and New York both feature historic asylums redesigned into luxury hotels and restaurants. An 18th-century asylum in Edinburgh is among many similar buildings in Europe now providing ideal romantic weekend getaways. In Tasmania, a restaurant has been established in the dormitory of one of the region’s oldest asylums.

The thought of dining in a former psychiatric institution may be off-putting to some, but the project is a great example of repurposing old buildings.[8] 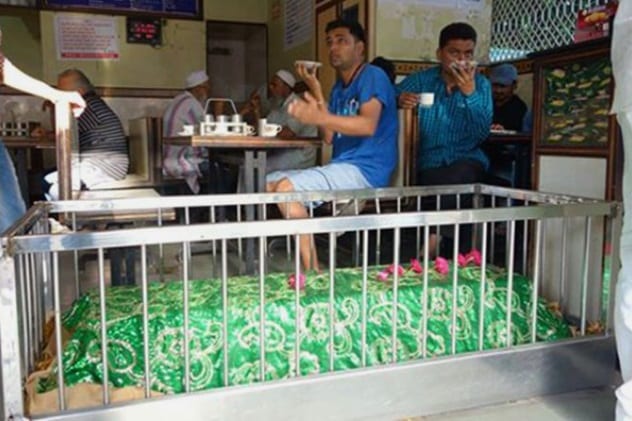 Cemetery restaurants are not unremarkable. Many larger cemeteries have cafes where visitors and mourners can stop for refreshments. Restaurants often surround big graveyards to cater to visitors. However, one restaurant in India is perhaps a little too close to the dearly departed for most people’s liking.

The New Lucky Restaurant in Ahmadabad, India, is located on the site of an old Muslim graveyard. Rather than disturbing the dead, the tables are set up surrounding the graves.[9] Metal fences surround the raised coffins, beside which diners enjoy their graveside coffee and curry. Ever thought of climbing a tree for dinner? Quite a few diners do just this for a particularly unique restaurant experience.

In Costa Rica, you will find a restaurant and cafe built around the branches of a massive ficus tree (pictured above), which you can access by simply climbing the stairs. In Thailand, however, you can be hoisted up into the treetops in your own private dining pod. Food is served to you via a series of cables from the ground below. Meanwhile, in Queensland, Australia, you can enjoy dinner in the treetop canopies at a local spa resort.[10]

Hopefully, the local wildlife in the trees know a little dinner table etiquette.

Lesley Connor is a retired Australian newspaper editor who provides travel articles for online publications and through the travel blog.

Read about more unique and prominent restaurants on 10 Iconic Movie And TV Restaurants That Are Actually Real and Top 10 Bizarre Restaurants.