With their offers of eternal life, churches can seem like timeless places that are recognizable the world over. Yet people have always shaped their places of worship according to the style of the time and the fashion of their culture.

Churches are as varied as the people who build them—and some of them can seem very strange to most of us. Here are 10 fascinating churches from around the world which may not be like your local parish house of prayer. 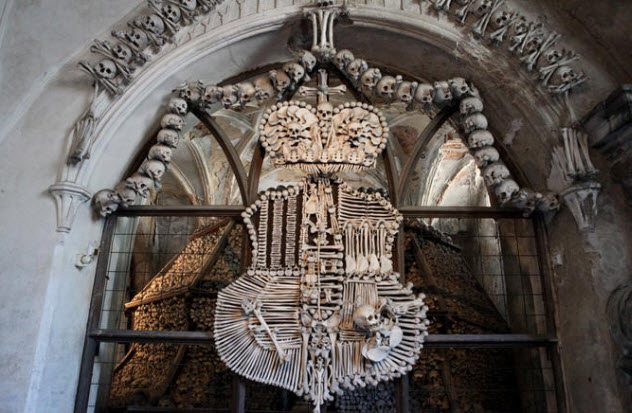 An ossuary is a place used for the storage of bones. It can be as small as a wooden box or as large as a city. In the catacombs beneath Paris, there are the bones of an estimated six million people who died in the city over the centuries. To store so many bones in one place, they have been neatly organized along the walls. At the ossuary in Sedlec, the bones are put to a more artistic use.

Sedlec Ossuary at Kutna Hora in the Czech Republic takes the form of a small chapel. The church is decorated with the bones of the people who wished to be buried there.

How did their bones come to be artifacts of interior decoration?

Legend has it that a monk in the 13th century returned from the Holy Land with some soil. He scattered this saintly soil around the graveyard. Impressed by this link to the Holy Land, people wanted to be buried there. Too many, as it turned out. With nowhere left to bury the bones, they were integrated into the chapel. The current decoration was created in 1870.

In each corner of the church sits a pile of bones 3 meters (10 ft) high and 4 meters (13 ft) wide. A vast chandelier of bones and skulls hangs from the ceiling. Cups and urns made from bones fill niches on the wall. Perhaps most impressive is the coat of arms of a noble family made from bones. It contains the image of a raven plucking the eye from a decapitated head—all depicted in bone.[1] 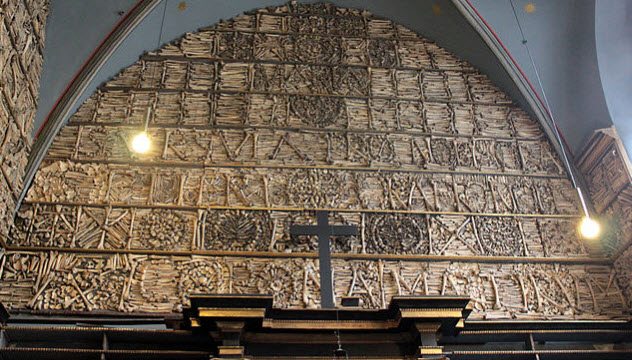 Sedlec may be the most famous bone-based church in the world, but the largest mosaic made from human body parts is found in the Basilica of St. Ursula in Cologne.

According to legend, Saint Ursula was a British princess sometime around AD 300–600. Being religiously minded, Ursula set out on a pilgrimage around Europe. As she was a princess, she could not travel alone, so she took 11,000 virgins with her.

Their ship was miraculously blown from Britain to Rome in a single day. From there, a less friendly wind blew them off course to Cologne. At this time, the Huns were ravaging Europe. Ursula was captured and martyred, along with her 11,000 companions.

The relics of Saint Ursula were housed in a basilica built in Cologne. But in the Middle Ages, a pit full of bones was discovered. These were thought to be Ursula’s 11,000, and they were moved into the basilica. They now line the walls of the Golden Chamber in artistic whirls and zigzags[2].

Unfortunately, it was discovered that the bones of the supposed 11,000 female virgins actually appear to be the bones of men, babies, and even large dogs.

8 Chapel Of The Holy Cross In Sedona 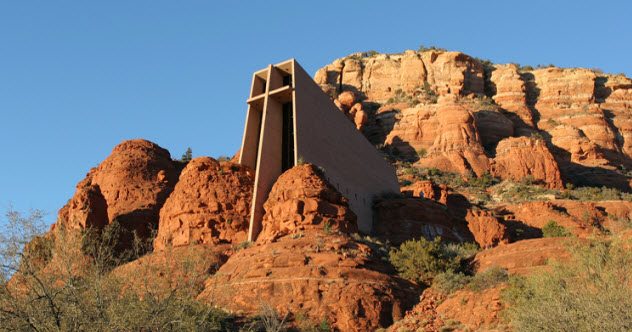 Although church architecture had remained remarkably stable for ages, the 20th century saw the unleashing of new ideas in design. Churches in the New World took on creative forms. In Sedona, Arizona, the Chapel of the Holy Cross is built into the red cliffs.

The Chapel of the Holy Cross was built in the 1950s by a local who was inspired by the Empire State Building to create a modern church. It juts out from between two mounds and overlooks a desert in a national forest. The huge windows give a view of the magnificent landscape.[3] However, it is more than modernist architecture and sightseeing which draw the crowds.

According to believers in New Age things, the chapel is located on an energy vortex. They believe that the boundaries between worlds are thin in the area of the chapel and this helps with spiritual healing. Others say that it is just a pretty spot for reflection. 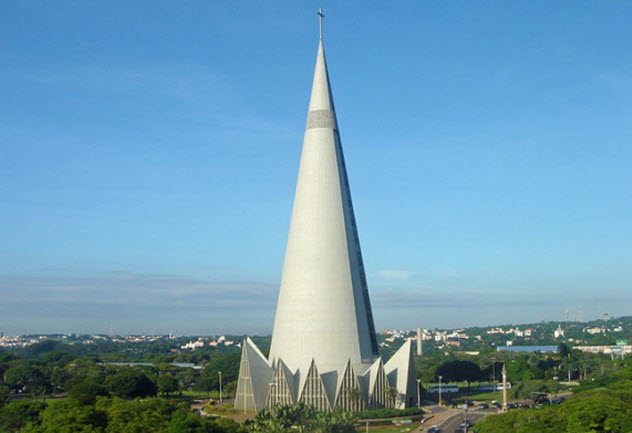 The aim of the design of the church was to bring people closer to God. Falling from the top would certainly speed you on your way to the Almighty. Between the inner and outer walls of the cathedral are 598 steps which lead to a viewing platform that looks down over the city. Those climbing the steps will pass the resting places of people who have chosen to be buried in the walls of the cathedral.[4]

The first stone of the cathedral was a piece of marble taken from Saint Paul’s Basilica in Rome after being blessed by Pope Pius XII. From such traditional beginnings came the construction of a church that was inspired by the Russian Sputnik satellite.

6 Reading Between The Lines 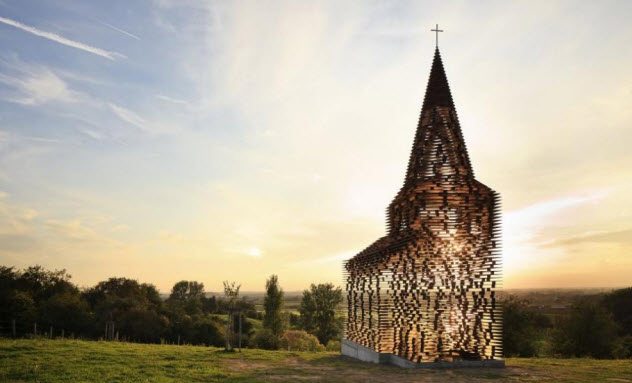 Many European cities have a complex relationship with their churches. As Western Europe becomes ever more secular, churches struggle to fill their pews. But their structures still dominate many central cities.

To address the dichotomy between the omnipresence of churches and their seemingly increasing irrelevance, architects Pieterjan Gijs and Arnout Van Vaerenbergh built a modern church. Called Reading Between the Lines, the church is both there and not.

You can visit the church in Borgloon, Belgium. Seen from the same height as the church, it appears as if the building is not there. Constructed from 100 layers of thin steel stacked up, it allows people to see the landscape through the other side. When viewed from underneath or at an angle, the church appears solid.[5]

The church is not used for regular worship but is more of a piece of art. Anyone is allowed to worship the god of his choice inside. 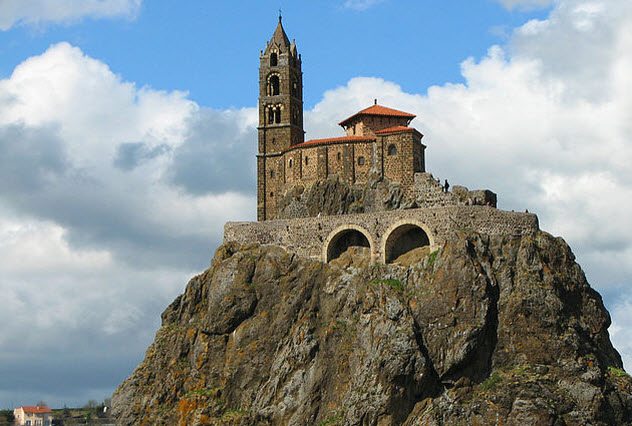 Saint Michael of the Needle has a common type of church structure. The unusual aspect is the needle, or spur of rock, upon which the chapel sits. It is a volcanic plug. Dominating the skyline of Le Puy-en-Velay, Auvergne, France, the rock has been used for worship for millennia. Prehistoric peoples set up shrines on it, as did the Romans. The chapel was erected in AD 962.

A local bishop, Godescalc, and the deacon Trianus went on a pilgrimage to Spain. Upon their return, they decided to construct a chapel in commemoration of their trip. Apparently not tired enough, they climbed to the top of the rock to do it. This climb of 82 meters (269 ft) is made by following a trail of 268 steps carved into the rock itself.[6]

Looking down on this lofty church from another volcanic mound nearby is a huge statue of the Virgin Mary. It was made from the melted-down remains of Russian cannons captured at the Battle of Sevastopol. 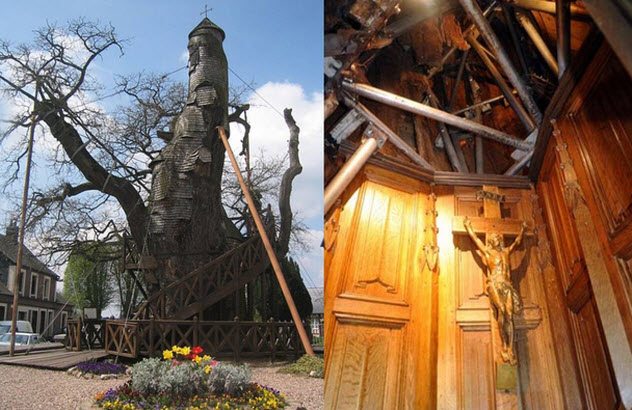 Elsewhere in France, there is an ancient church which eschews the use of stone at all. Chene chapelle (“Chapel Oak”) is located in Allouville-Bellefosse in northern France. The whole church is built inside an enormous oak tree.

A spiral staircase surrounds the tree and leads to two separate tiny chapels. Although trees have been used for worship in many places, this tree’s holy use came about in a unique way.

The oak tree is at least 800 years old. According to local legend, however, the tree is as old as the kingdom of France itself and William the Conqueror prayed under its branches before he left for England. In the 17th century, the tree began to be used as a chapel after lightning hit it.

The lightning ignited the wood inside the tree, burning it away. This left a hollow but still-living tree. Taking this as a divine sign, the local abbot and priest had the shell of the tree converted into a chapel.[7]

When atheist revolutionaries threatened to burn down the tree, locals rescued it by renaming it a “temple of reason” to fit with the beliefs of the French Revolution. 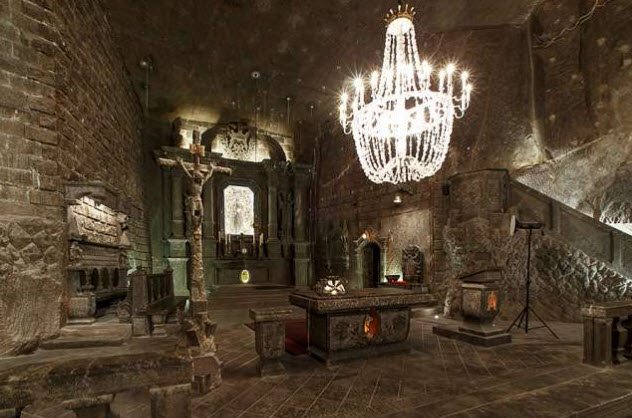 Mining has always been a risky business. With the threat of being buried alive an ever-present danger, it is no wonder that miners have wanted to have God on their side before they set off for work. In the Wieliczka salt mine in Poland, the miners carved chapels directly out of the rock salt.

The salt mine has been dug out since at least the 13th century. As the work area moved forward, so did the chapels. New ones were carved for the workforce as they advanced. No one knows how many chapels were constructed over the centuries as many were probably demolished for their salt.[8]

Now the mine contains at least five major chapels. The newest chapel is dedicated to Pope John Paul II, who visited the mines several times, and includes a salt sculpture of the former pope.

Located hundreds of feet underground, these chapels are still used for worship, although they are also a popular tourist destination. Weddings in the depths can be arranged. 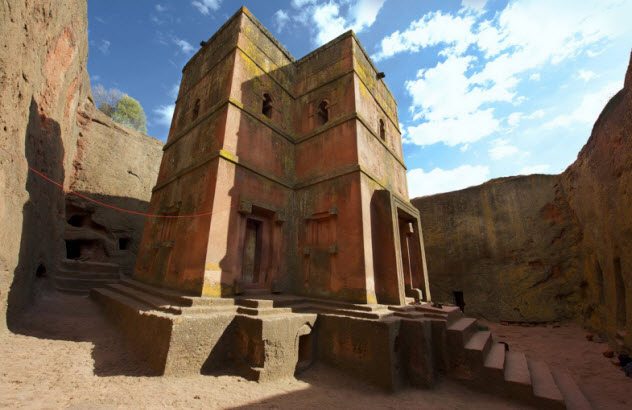 At Lalibela in Ethiopia, there are the largest monolithic (carved from a single rock) temples in the world. Instead of constructing their churches upward, the people decided to plunge their churches into the ground. At Lalibela, 11 churches were built that way.

No one knows the exact age of the churches. Legend has it that they were built by King Lalibela in the 13th century on the orders of an angel sent by God. Experts say that they may be hundreds of years older. The largest of the 11 churches, all of them underground, is 10 meters (33 ft) tall.[9]

These enormous churches have complex doorways, windows set in the walls, and drainage systems. Despite the simple tools available at the time, the whole construction is supposed to have been completed in 24 years.

The entire complex of churches is now a UNESCO World Heritage Site. Although they have historically been a site for pilgrimage, they are now a popular tourist destination. 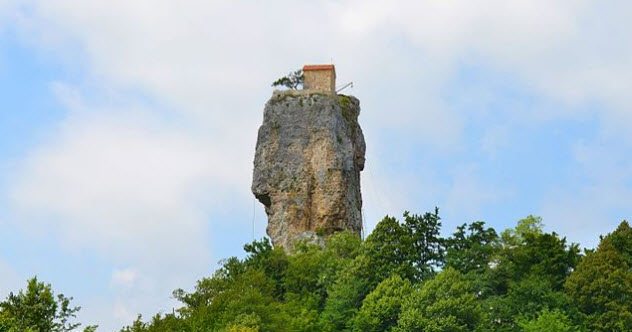 Christian monks have always tried to separate themselves from society to focus completely on God. To get the solitude they desire, monks have gone to deserts, islands, and other inaccessible places.

In Georgia, they also climbed a rocky outcrop known as the Katskhi Pillar. Pagans had used the 40-meter-tall (130 ft) pillar for their worship, but this stopped when Georgia converted to Christianity in the fourth century. In the seventh century, a small church was constructed on top of the pillar.[10]

Monks and priests had used the top of the pillar for their worship for centuries. By the 18th century, however, no one knew how to ascend the pillar so the ruined churches could only be seen from far below.

The pillar was first climbed in the modern period in the 1940s. Exploration of the top of the pillar revealed hermit cells used by monks. There was also a wine cellar, suggesting that life was not entirely without fun up there.

In 1993, a lone monk returned to the top of the pillar. Maxime Qavtaradze moved into an old fridge there, living in the domestic appliance because there was no other shelter. Now a chapel has been constructed there as well as a cottage for the monk. Supplies are winched up to the monk, but he is able to get up and down via a slightly rusty iron ladder to visit a monastery at the base.

Read about more churches you just have to see on Top 10 Most Stunning Roman Catholic Basilicas and Top 10 Haunted Churches And Cathedrals.