The history of the US dollar predates the United States itself. It goes back to the Revolutionary War when all thirteen colonies issued a single currency to fund the war against Britain. The current dollar was first issued during the Civil War. Several other currencies were introduced before, during, and after the war, and some even coexisted alongside the current dollar.

Interestingly, the present-day US currency has some bills that are rarely seen or even heard of. Ever heard of the $100,000 bill? Maybe not. Well! Here are ten old-timey bills and currencies of the US. Mind you, some are still legal tender even though they are out of print.

Silver certificates were issued in the US between 1878 and 1964. They were used like regular money and were originally redeemable for their face value in silver coins. However, between June 1967 and June 1968, they could be exchanged for silver bullion and thereafter, regular bank notes. They remain legal tender and can still be traded for current bank bills. In fact, silver certificates closely resemble bank notes, except that their fine print reads “one dollar in silver payable to the bearer on demand.”

Interestingly and unknown to many, two versions of the $1 silver certificate issued in 1886 and 1891 are the first American paper money to ever feature the portrait of a woman. The woman was Martha Washington, the wife of George Washington and the first, first lady of the United States. Martha Washington silver certificates are valued among collectors. An 1891 version in perfect condition sells for about $1,500.[1] 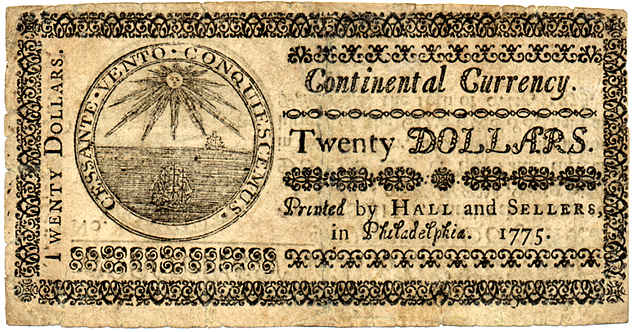 The Continental Currency was issued on June 22, 1775, at the beginning of the Revolutionary War, when the thirteen colonies that would later form the United States agreed they needed a unified currency to prosecute the war against Britain. The money was called “Continental” because it was issued by the Continental Congress, which was the highest governing body during the war. It consisted of delegates from all thirteen colonies.

The currency was backed by nothing other than the promise that it would be repaid from the funds generated from future taxes. The public had no trust in the money, and it led to inflation so bad that even George Washington complained about one wagonload of Continental Currency not buying one wagonload of supplies. Britain worsened the effect of the inflation by releasing counterfeit notes into the US.

The value of the Continental Currency varied from colony to colony. People even coined the idiom “not worth a Continental” to describe the worthlessness of an object. The money became so unstable that it crashed in May 1781.[2] The failure of the currency put the newly formed United States in heavy debt at the end of the war. It was even one of the reasons why the US abandoned the idea of a confederation for a stronger central government. The US itself avoided issuing paper money until the Civil War.

In 1933, President Franklin Roosevelt ordered all US citizens to surrender all gold coins, gold bullion, and gold certificates in their possession. This was at the height of the Great Depression when people hoarded their gold and refused to accept paper money. In fact, paper money became so worthless that barter (the exchange of goods for other goods or services) became the preferred medium of exchange.

With most citizens separated from their gold, they were forced to spend the paper money. The federal government itself printed more money including a new $100,000 bill that featured the portrait of Woodrow Wilson, the 28th president of the United States.

There was a catch though. The bill was not legal tender since it was not intended for general use. It was specially made for branches of the Federal Reserve to use in high-value transactions. It remains the highest single bill denomination ever printed in the US.[3]

The US federal government issued its first paper money when the US Civil War broke out in 1861. Before then, the federal government used gold and silver in its transactions while more than 8,000 banks independently issued and controlled all the paper money in circulation. The war seriously depleted the US treasury and caused widespread inflation. In response, Salmon P. Chase, the Secretary of Treasury, suggested that the government introduced a single paper money to replace all the paper monies issued by the banks.

This led to the introduction of Demand Notes, which are the first true paper money issued by the United States government. The Continental Currency mentioned above does not qualify as the first paper money because it was released before the formation of the United States. The government issued $10 million worth of Demand Notes, which was redeemable for gold or silver. However, it never caught on since people hoarded their gold and silver coins.

In 1862, the US Congress passed a law ordering the production of a new currency that was not redeemable for gold or silver. This led to the creation of the US dollars used to date. Demand Notes were taken out of circulation as this new paper money was introduced. At first, the paper money suffered from constant inflation and deflation as its value rose and fell depending on the victories and losses of the Union.[4] 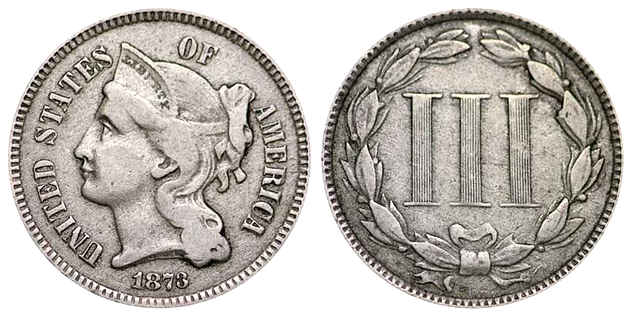 As we already mentioned, Americans hoarded valuable coins during the US Civil War. To address this, the Treasury issued fractional currency notes in denominations of between one and fifty cents. Most Americans hated the fractional money, which they called “shinplasters” because of the extra thin paper used in its production. The paper was compared to the thin paper doctors used to make plaster casts.

In 1865, the Treasury announced plans to issue more fractional currency. However, Congress ordered that the three-cent fractional currency, which was originally a silver coin and was valued because of its use in making change and paying for postage (which cost exactly three cents) should not be made with shinplaster but with a mixture of nickel and copper.

The three-cent nickel was proposed by Congressman John Kasson, who was famous for previously disapproving the use of nickel in coins. Kasson did hate the idea of using nickels in coins, but he hated the shinplasters more, so he approved the nickel coin as the lesser of two evils.

The 1,000 dollar bill is one of the rarest legal tenders in the US. It has been out of print since 1946 but is still acceptable by banks in exchange for $1,000 equivalent in credit. Banks are expected to remit all $1,000 bills deposited at their branches to the Federal Reserve, which ensures they do not go back into circulation. However, people with $1,000 notes prefer hoarding them since their rarity has made them worthier than their face value.

The US federal government printed its first $1,000 bill during the US Civil War even though the thirteen colonies that formed the United States had issued a $1,000 bill as part of the so-called Continental Currency. The Union used the money to purchase items like ammunition, which it needed to use to fight the war.

After the war, the $1,000 note and other similarly high valued bills were relegated for use in large-scale transactions like interbank transfers and property deals. It was last printed in 1946 but remained in circulation until 1969 when President Richard Nixon ordered the Federal Reserve to recall all high valued bills over fears that they would be used for money laundering. Besides this, the $1,000 bill was expensive to print since only a few were produced at a time.[6]

The $10,000 bill is the highest legal tender ever printed in the US. Unlike the $100,000 note, it was intended for everyday use, and like the $1,000 bill, it remains a legal tender even though they were both taken out of circulation in 1969. The $10,000 note features the portrait of Salmon P. Chase, who served as President Abraham Lincoln’s Secretary of Treasury. Chase also served as a senator and governor of Ohio and Chief Justice of the United States.

However, it was his role as Secretary of Treasury that earned him a place on the $10,000 bill. As we mentioned earlier, it was he who proposed the creation of a single, federally controlled paper money. The $10,000 bill was used for large transactions like settling interbank transfers and was not commonly used in public. Estimates point that there are less than 350 in circulation today. They are a huge collector’s item, and a crisp bill could fetch up to $140,000. A rough one could fetch $30,000.[7]

The Double Eagle was a $20 gold coin issued between 1907 and 1932. It was taken out of circulation in 1933 when President Franklin Roosevelt banned American citizens from owning gold. 445,300 gold coins postdated 1933 had been minted by the time President Roosevelt issued the Executive Order and were never released. They were melted down and converted into bullion in 1937.

However, some of the 1933 gold coins escaped being melted. No one knows how the coins were smuggled out of the US Mint, but it is speculated that a cashier called George McCann switched about twenty 1933 Double Eagles for earlier versions. That way, no one would notice the difference in weight.

A jeweler called Israel Swift is known to have been in possession of nineteen of these coins, and he sold nine to private collectors. One was sold to King Farouk of Egypt. The coin reappeared when King Farouk was deposed in 1952 but disappeared again when whoever was in its possession realized that the Secret Service was still trying to recover it. The Secret Service only got hold of it forty years later when it launched a sting operation against Stephen Fenton, a British coin dealer who was in its possession.

The coin sold for a record $7,590,000, which includes a 15 percent buyer fee and an additional $20 for its face value. Joan Langbord, one of Swift’s heirs uncovered ten more coins in September 2004. She sent them to the US Mint for authentication, but the Secret Service immediately seized them.[8]

Treasury Notes could be redeemed for gold or silver coins, depending on the preference set by the Secretary of Treasury. A 500 dollar bill was also planned but was never issued. Only sample copies were printed.

The bills issued in 1890 and 1891 look similar but there are a few ways to tell them apart. One difference is the type and size of seal used. Another is the design of their reverse sides. 1890 bills have a rich dark green reverse while 1891 bills have a plain green and white reverse. Both versions are collector’s items although the 1890 edition is rarer and more expensive.[9] 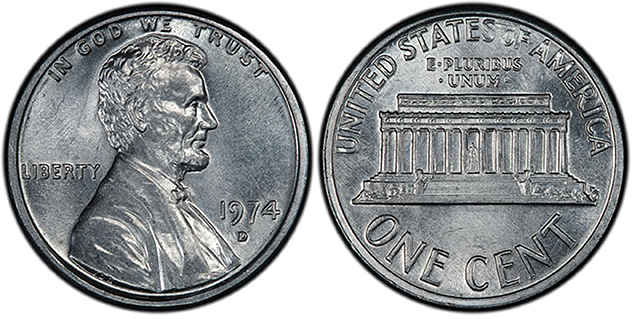 Copper got so costly in 1973 that the US Mint started looking into an alternative metal to use for its coins. After an extensive test, it settled for aluminum. In 1974, the US Mint transported uncut aluminum alloys from its Philadelphia mint to its Denver mint, where it was cut to shape and returned to Philadelphia for stamping.

The Denver mint was not supposed to stamp any coin but an assistant superintendent went on to make the only 1974 aluminum cent created at the Denver mint. It is a one cent denomination and was marked “D” to show that it was made in Denver.

In 1974, the Philadelphia mint stamped about 1.5 million aluminum coins and shared some samples among members of the Congress. However, Congress refused to authorize the aluminum coins for several reasons including the fact that a representative of the vending industry claimed that aluminum coins would not work with their machines.

The US Mint melted the aluminum coins, but at least fifteen remain unaccounted for to date. These unaccounted coins are part of those held by Congressmen who did not return their sample coins. As for the illegally made “D” coin, Harry Edmond Lawrence, the son of the assistant superintendent, returned it to the US Mint after the death of his father.[10]

Read more amazing facts about money on10 Banknotes With Hidden Images And Symbols and 10 Curious Coins And Coin Tokens From History.