Sabine Hossenfelder is not a household name, but a recent article of hers has stirred up a host of debate among some scientific specialists. In her piece, published by the magazine New Scientist, the journalist and theoretical physicist argues against investing an enormous sum of money in a new particle collider. Research organization CERN has announced plans to build a €21 billion supercollider, a proposal that Hossenfelder says does not justify its hefty price tag.[1]

Her article has split opinion among theoretical and particle physicists. Many agree with Hossenfelder’s well-reasoned conclusion. Others argue that investment is needed for the evolution of cutting-edge technology; without fresh areas of work, the research will simply dry up.

Whether or not the high-cost supercollider will be built remains to be seen. However, in the midst of this forward-thinking debate, we must not lose perspective on the here and now. The Large Hadron Collider, CERN’s main boast, opened only a decade ago. In that time, we have witnessed the discovery of gravitational waves, the Higgs boson, and various quantum mechanical phenomena.

These bold leaps forward have only been possible due to a wealth of state-of-the-art technology. The following are all incredible feats of engineering that have helped to revolutionize our understanding of the world around us. 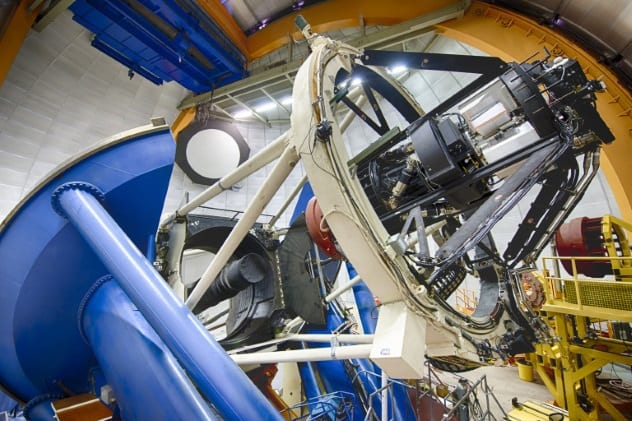 What is dark energy? The brief answer is that nobody is really sure. In a sense, dark energy is the antithesis of gravity, exerting a negative, repulsive pressure that is believed to accelerate the expansion of the universe. The elusive energy form is said to account for around two thirds of the total mass-energy of the universe, the rest being mostly dark matter.

That said, the mystery of dark energy may not be a mystery for much longer. A group of researchers at the Cerro Tololo Inter-American Observatory is exploring dark energy in an attempt to understand the universe at a fundamental level. Situated high in the Chilean Andes, their Dark Energy Camera (DECam) captures high-definition images of the cosmos. It is one of the most sophisticated digital cameras on the planet.

It took scientists from six different countries over a decade of designing and testing to come up with DECam. The project has mapped out roughly an eighth of the sky in exceptional clarity, while also cataloguing 300 million galaxies. Experts are currently in the process of analyzing the images.[2] 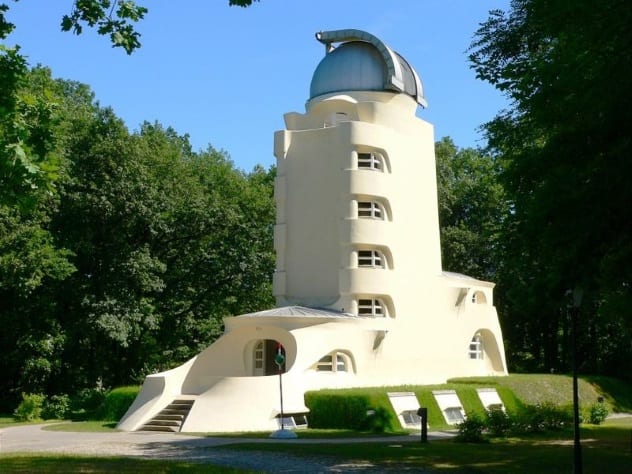 As extravagant to look at as it is scientifically vital, the Einstein Tower in Potsdam, Germany, has spent nearly a century studying the Sun. The observatory was opened in the 1920s with the aim of validating Einstein’s then-recently published theory of relativity. Housed in the tower is an unconventional style of telescope, immovable and bolt upright, that measures spectral shifts in solar rays.

Even more bizarre than the theory it was commissioned to verify is the building itself. The Einstein Tower is a renowned example of expressionist architecture that brought its creator, Erich Mendelsohn, to fame. Observatories are generally fronted by bland, purely functional exteriors, but Mendelsohn’s vision was far more avant-garde.

The outcome of this outlandish approach to architecture is a curvaceous, science fiction-esque structure that juts up out of the German landscape. The building’s namesake, Albert Einstein, is said to have disapproved of the futuristic design.[3] 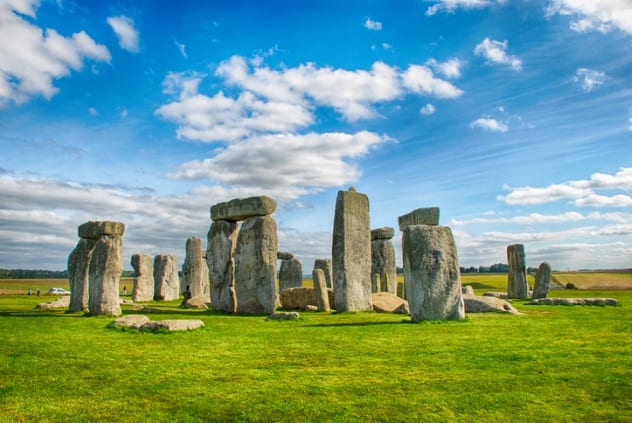 By modern standards, it may be a prehistoric artifact, but when the rocks were first erected on Salisbury Plain some 5,000 years ago, Stonehenge was state-of-the-art technology. Historians have found strong evidence to suggest that the stone circle was a primitive sort of observatory used to monitor the sky.

In fact, some claim that the builders of Stonehenge must have used Pythagoras’s theorem, two millennia before the Greek philosopher was born. The original henge is said to have been surrounded by 56 wooden posts. Ancient astronomers would have used these to map out solar and lunar eclipse cycles.[4] 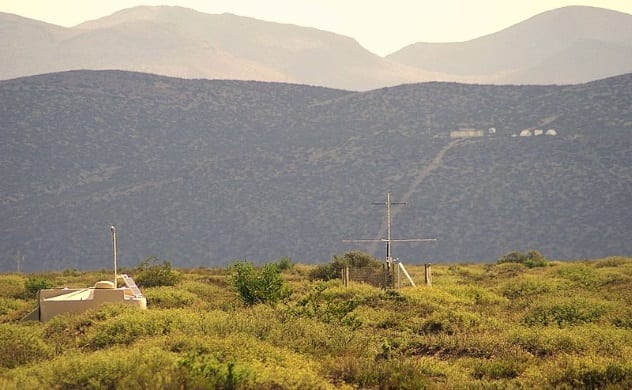 Cosmology is brimming with mysteries. How did our universe come into being? What is it made of? How do you explain its unusual expansion?

One such mystery is cosmic rays. Our planet is being bombarded by a continuous stream of high-energy particles, hurtling toward Earth at close to light speed. This barrage of subatomic particles is a phenomenon known as cosmic rays. The lower-energy rays are known to be born out of stars dying in our Milky Way galaxy. Far less is known about the higher-energy rays. Thought to originate from far-off galaxies, their exact source has eluded scientists for decades.

Cosmic rays are also extremely rare. On average, a square kilometer (0.39 mi2) will be hit by just one high-energy particle per century. To combat this issue, researchers have constructed an enormous detector that spans for miles across Argentina. The Pierre Auger Observatory covers a detection area of around 3,000 square kilometers (1,200 mi2)—roughly 30 times the size of Paris. Completed in 2008, the observatory picks up the cosmic rays after they have struck the atmosphere and showered down to Earth in a cascade of various secondary particles.[5] 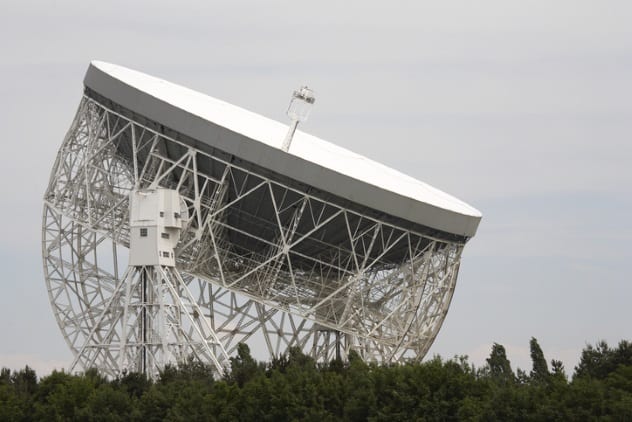 In a rural village in the heart of England, a renowned radio telescope has spent the last 60 years examining the cosmos. Found at Jodrell Bank, an observatory run by the University of Manchester, the Lovell Telescope is one of the most powerful radio telescopes ever built.

Its standout feature is the fully steerable white bowl, 76 meters (250 ft) in diameter, that adorns two motor-powered towers. This enormous bowl acts like a giant satellite dish, collecting and focusing radio waves from sources in the sky to be transformed into electrical signals.

Still the third largest of its kind over half a century since it was first assembled, Lovell has played a pivotal role in furthering our understanding of astronomy. The theories now being explored by Lovell were virtually unimaginable when it was first opened.[6] 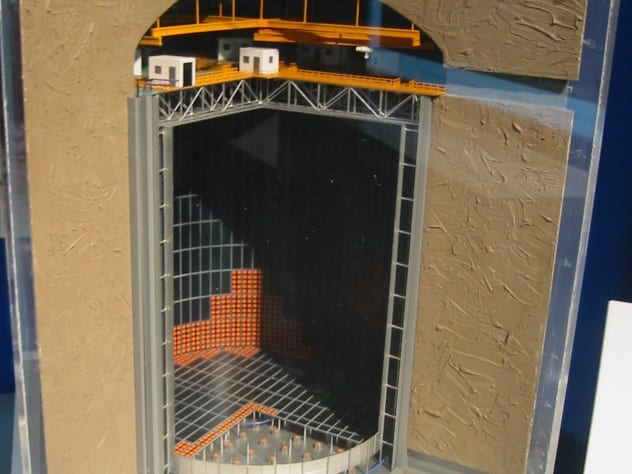 Neutrinos have been at the heart of a number of fascinating scientific discoveries in recent years. The minuscule subatomic particles are thought to be among the most abundant in the universe and also one of the most difficult to detect. In 2015, Takaaki Kajita and Arthur B. McDonald were awarded the Nobel Prize for Physics after demonstrating that neutrinos change their intrinsic properties as they travel.

This fluctuation requires the particles to have some mass, contrary to the long-held belief that neutrinos are massless. Particle physicists now have to reassess their understanding of the nature of matter. It will likely lead to an expansion of numerous scientific theories.[7]

Kajita’s groundbreaking discovery was only possible due to Super-Kamiokande (model pictured above), an enormous underground detector tank filled with 50,000 tons of water. As neutrinos sprint through the tank, the vast majority of them leave no trace, but a few emit dazzling bursts of Cherenkov light (the optical equivalent of a sonic boom). By analyzing the bursts, researchers are able to examine the properties of the neutrinos themselves. 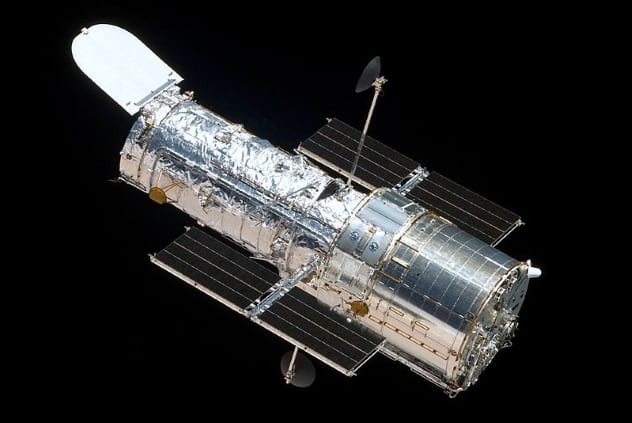 Orbiting 547 kilometers (340 mi) above our heads, the Hubble Space Telescope has been described by NASA as the most important step forward in astronomy since Galileo introduced his telescope in 1610. In April 1990, when Hubble was first launched and deployed; having a permanent telescope outside of the Earth’s atmosphere was seen as revolutionary. Almost three decades later, the technology remains right at the cutting edge of modern science.

Unlike traditional ground-based telescopes, Hubble surveys the depths of space unimpeded by Earth’s dense, distorting atmosphere. The telescope’s sophisticated cameras can view astronomical occurrences with better clarity and consistency than any observatory on the planet.

The steady stream of observations being fed back from Hubble has entirely altered our understanding of the universe around us. On average, around 150 scientific papers per day will cite research that in some way incorporates Hubble data. The telescope has enabled astronomers to explore all manner of topics in great depth, from supermassive black holes to dark energy. It’s a mammoth achievement, especially for a satellite that is only the size of a large bus.[8] 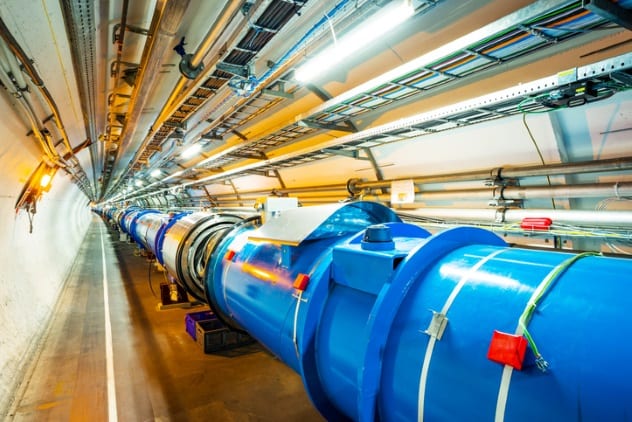 CERN’s Large Hadron Collider (LHC) is, for the moment, at least, the most powerful particle accelerator ever built—although, as addressed at the start of the article, developers are currently debating whether to build another almost four times larger.

Inside the 27-kilometer (17 mi) magnetic ring, two beams of particles are thrust together at close to light speed. Researchers in Geneva have been smashing subatomic particles into one another since 2009. In 2012, after the LHC had been in operation for a only a few years, they made global headlines by confirming the existence of the Higgs boson.

It was initially hoped that the LHC might also be able to shed light on string theory and dark matter. As time passes on, with no evidence found, this is looking increasingly unlikely.

In order for the ring to maintain its magnetism, coils of superconducting cable need to be chilled with liquid nitrogen, which keeps them at a frosty minus 271.3 degrees Celsius (–456.3 °F). At these extremely low temperatures, the cable has an incredible ability to conduct electricity perfectly without losing any energy.[9] 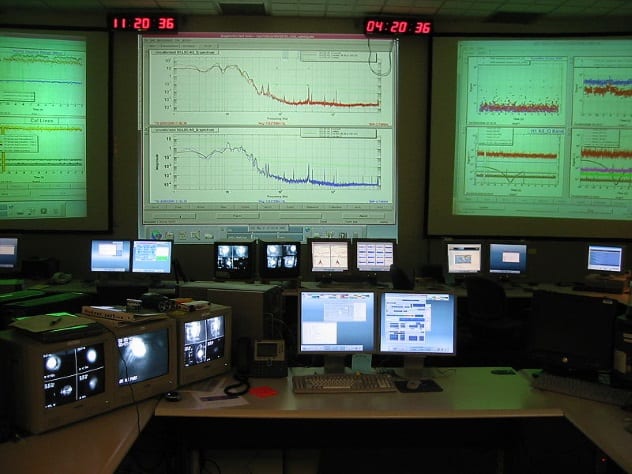 Gravitational waves are distortions in the fabric of space and time that radiate from high-energy interstellar bodies. They emanate from accelerating objects and spread through the cosmos like ripples across a pond. The largest waves stem from massive, turbulent events like a supernova explosion or two black holes colliding. There is even believed to be some gravitational radiation still lingering from the birth of the universe.

Albert Einstein first imagined these celestial ripples in 1916 as part of his general theory of relativity. However, their existence was not proven until 1974. For the first gravitational wave to actually be detected, researchers at the Laser Interferometer Gravitational-Wave Observatory (LIGO) in Louisiana had to construct a style of high-precision instrument known as an interferometer. Interferometers are able to take minuscule measurements by comparing two near-identical beams of light. They are often used to determine small changes in position.

While interferometer technology has existed since the late 19th century, LIGO’s are the most sensitive ever built. The twin detectors are made from two 4-kilometer (2.5 mi) steel vacuum tubes and measure fluctuations thousands of times smaller than a proton.[10]

The first gravitational waves to be sensed by LIGO came from two black holes crashing into each other almost 1.3 billion years ago. This momentous achievement earned three of LIGO’s researchers the 2017 Nobel Prize in Physics, along with mass acclaim from the media and their peers. 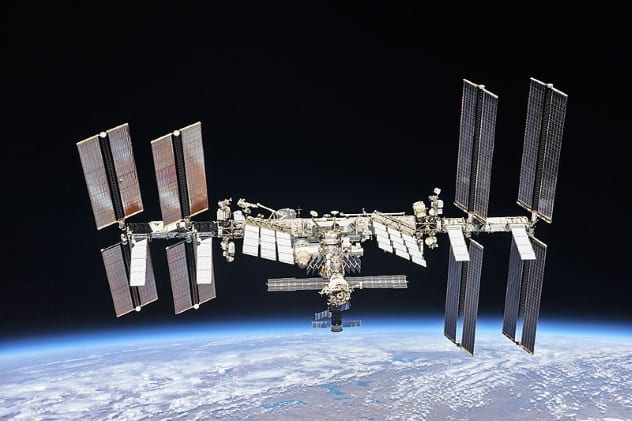 Around the same size as a football field, the International Space Station (ISS) is the largest artificial structure that we have ever put into space. Since November 2000, the station has been continuously inhabited, hosting over 200 individuals from 18 different countries. In a day, the distance traveled by the ISS is the equivalent of flying to the Moon and back.

Onboard the ISS, research projects are conducted into a wide array of various topics. On one mission, the crew was tasked with burning small, spherical droplets of fuel as part of a study into flames in microgravity. Another grew large crystals of protein in the name of medical research.

What’s more, the ISS is mounted with an exceptionally sensitive particle detector known as the Alpha Magnetic Spectrometer (AMS). Unlike the Pierre Auger Observatory, this instrument is able to measure cosmic rays before they fragment in the atmosphere. Data from the AMS may help enlighten cosmologists as to the source of cosmic radiation, while also supporting some theories on the composition of dark matter.[11]

Read about more amazing technological feats on 10 Futuristic Technologies Of ‘Avatar’ That We Already Have and 10 Implausible Technologies From Fiction That Are On Their Way.