The great white shark is a powerful beast. Even so, it has its fair share of enemies and freak accidents. Humans remain a constant danger, but there are times when sharks get themselves into trouble. They choke on chow, jump into boats, and botch hunts.

Sometimes, they have little control over what preys on them. There is a mysterious brain fungus, and orcas treat them like a snack. The lucky few encounter the good side of people—when the public and experts do everything they can to rescue a shark that came in second. 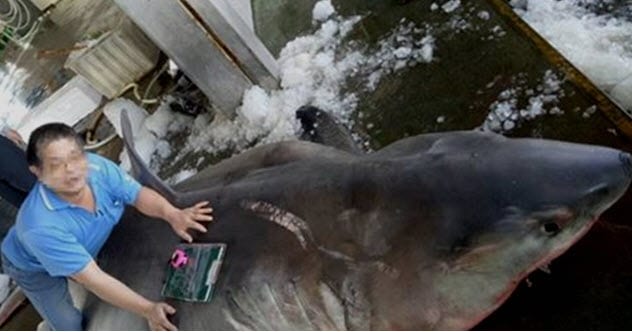 Early in 2019, a pregnant white was caught under mysterious circumstances near Taiwan. The fishermen claimed that it was an accident, but she produced a sizable profit at the local market. A taxidermy company bought the carcass for nearly $2,000.

While she was being sliced open at the fish market, the butcher pulled 14 pups from her two wombs. This was a record for the species. The mother herself was a looker. At over 4.7 meters (15 ft) long, the enormous specimen was very close to giving birth when she was caught.[1]

For scientists, the capture was bittersweet. Great whites are classed as a vulnerable species, and the loss of a pregnant female is a big one. But the rarity of the catch, a pregnant great white, was worth its weight in gold for research. The photographs that documented the mother and the pups provided material to study, especially on the condition and feeding habits of the young. (They ate unfertilized eggs in the wombs.)

In 2015, a great white felt like having seagull for lunch. It noticed such a bird sitting on the sand at Cape Cod. Delighted, the shark made a rush for it and promptly beached itself.

Shocked beachgoers watched the 2-meter-long (6.6 ft) predator sail into trouble. It got stuck in a shallow puddle where sympathetic individuals applied CPR from a distance, so to speak.

Great whites must filter water through their gills constantly. They do this to breathe the oxygen in seawater. Thanks to a bucket line, the shark was repeatedly doused by volunteers. Although it kept breathing, the juvenile male only had a limited amount of time to survive this way. Luckily, the harbormaster arrived before it was too late and towed the youngster back out to the sea.

A marine biologist happened to be nearby when the animal beached. Before it was released, the man tagged the shark with a tracking device. It may have missed out on lunch, but at least the shark encountered a rescue mob and will now do his bit for science.[2] 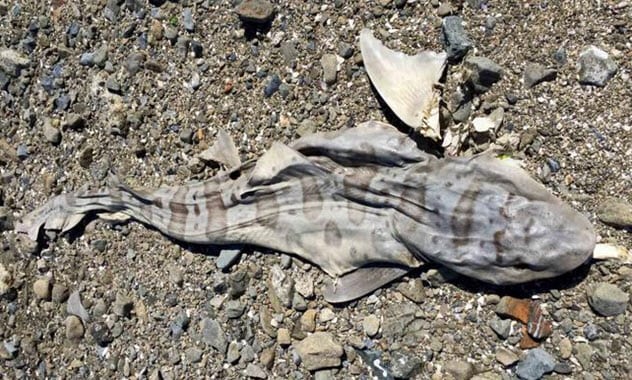 Shark strandings are often a seasonal thing. However, in the last few years, so many sharks perished that researchers knew something was terribly wrong. Mark Okihiro, a California fish pathologist and shark death expert, examined hundreds of sharks from different species. Most of the mysterious deaths pointed to a brain infection, something unheard-of in sharks a few years ago.

In 2017, a great white shark landed on Okihiro’s table. Beachgoers noticed the young shark in shallow water near Santa Cruz. They put it back in deeper water, but the animal was clearly disoriented and died shortly afterward.

Okihiro found that an infection had caused a fatal brain hemorrhage. By then, the researcher expected to find signs of meningitis. Displaying similar symptoms, the previous sharks were determined to have died from the meningitis-causing Carnobacterium. But there was no sign of it in the great white.[3]

Soon, hundreds of sharks of different species died the same way in San Francisco Bay. Eventually, Okihiro identified a fungus as the killer. However, the exact nature of the fungus and why it is so deadly to sharks remain elusive. 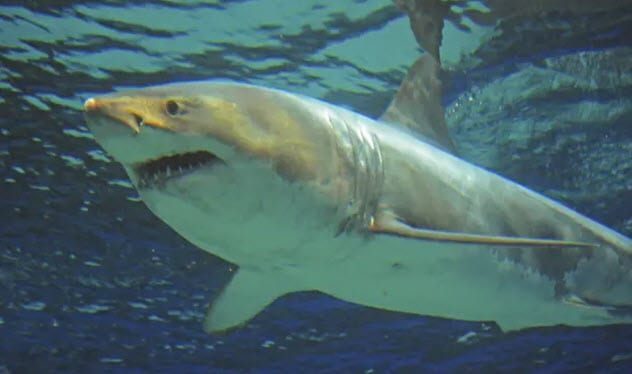 In 2016, the Okinawa Churaumi Aquarium gave in to nagging visitors. Located in Japan, the aquarium had received persistent requests to display a great white shark. When a shark was accidentally netted near the southwest coast, the institution took it home.

The great white shark is not a goldfish. It is an exceptionally difficult species to maintain in a captive environment. It needs to be constantly on the move to harvest oxygen from the water and to regulate its body temperature.

The aquarium proudly announced that it was successfully keeping the 3.5-meter (11.5 ft) male alive. Three days later, he was dead. The shark had refused all food since its capture. Even so, it appeared healthy and cruised around with the aquarium’s other sharks.

At one point, the male suffered some sort of collapse, sinking to the bottom of the tank. He passed away after the staff tried to resuscitate him with oxygen. The aquarium said they would investigate the cause of death, but activists were certain that the stress of the capture and captivity was too much for the shark.[4] 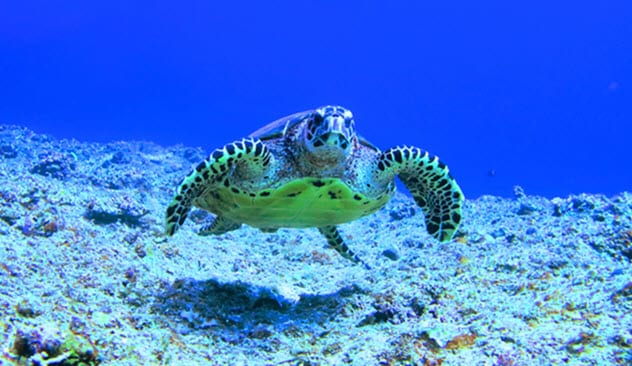 In 2019, a fisherman heard his fellow catchers joke over the radio about a shark. They said it was swimming around with a giant turtle in its mouth and could not spit it out.

At first, Greg Vella did not take them seriously. He continued with his job as a tuna wrangler near Japan. However, the following day, he saw the evidence for himself. Caught in some netting was a large great white. Inside the predator’s mouth was a giant turtle.

By this time, the shark was dead, having apparently choked on its awkward meal. There was also a chance that the great white had died for another reason. Feeling ill, it may have regurgitated the last thing it ate. It was not clear what had happened, but the incident was uncommon.

Turtles of this size are big because they are survival experts. Normally, sharks avoid them. For the persistent predators, turtles have a special maneuver—turning themselves in such a way that their shells make for an impossible swallow. Yet this one got chowed. Kudos to the shark, but it may have ended both their lives.[5] 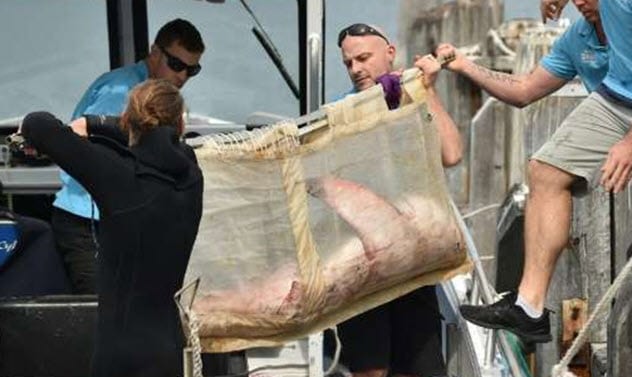 In 2017, a shark went on an adventure. Unintentionally perhaps, but the juvenile great white surely experienced a unique trip. It involved rocks, an ocean pool, an aquarium tank, and a boat ride.

In September, the 1.8-meter-long (5.9 ft) predator was found thrashing on the rocks on Manly Beach in Sydney. Experts from Manly Sea Life Sanctuary decided to move him to a nearby ocean pool. This was to allow the shark to recover from its stranding ordeal.

While there, the sanctuary’s life science manager jokingly told some kids that the predator’s name was “Fluffy.” A lot of people were present to hear it, and the name stuck.[6]

After resting for a few hours, Fluffy spent the night at the aquarium. He was not alone. Throughout the night, divers remained in his tank to make sure that he did not injure himself in the confined space. The next day, the shark enjoyed a boat ride into deeper waters to lessen his chances of stranding again. 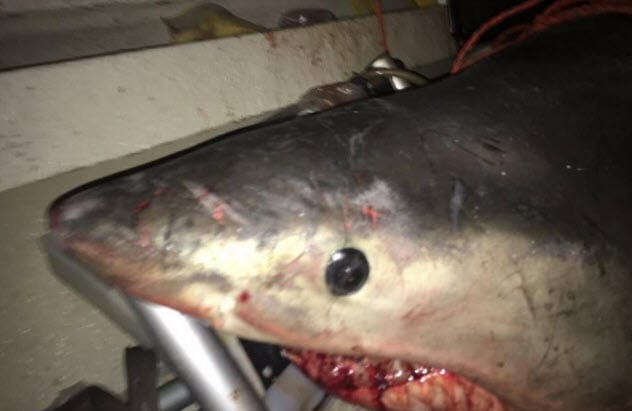 In 2017, Terry Selwood planned to fish for snapper off the north coast of New South Wales, Australia. Instead, a great white shark jumped into his boat. The creature’s fin brushed against Selwood’s arm and tore off the skin. Small surprise as sharkskin consists of scales that look like tiny teeth. The shark also reportedly knocked him over.

It was not a pleasant experience for the predator, either. It was around 3 meters (9 ft) long, while the boat was scarcely bigger. The shark was stuck and eventually died. After Selwood was picked up by marine rescue, the great white had to be removed with a forklift.

Shark experts said the jump was not an attack on Selwood. The leaps seen on documentaries are provoked. The filmmakers drag meat at high speed to get the sharks to leap.

Selwood himself was not in the water. He claimed that no fish were near the surface, the only reason that sharks typically breach. It might have followed Selwood’s bait. Two other explanations include jumping in for an unknown reason or being hooked and reeled in like a regular fish. Without a necropsy (animal autopsy), this incredibly rare incident might never be explained.[7]

3 Orcas Snack On Them 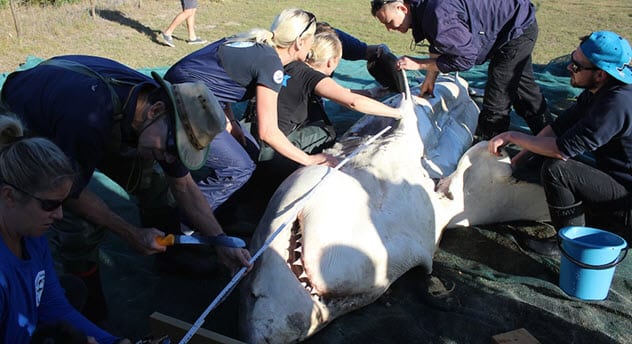 Great white sharks are mighty predators, but they quickly clear out when killer whales arrive. The reason is grisly. Orcas love to snack on shark livers. This behavior has been recorded off the coast of Australia and San Francisco. Both species also live off the western coast of South Africa. In 2017, three great whites were found on the beach there within four days.

Necropsies showed that their livers were gone. A few weeks later, a fourth shark was found in the area minus its liver, stomach, and testes. It was a big guy, measuring 4 meters (13 ft) long. Like the others, he had been eviscerated and left for dead by another predator.

Although nobody had witnessed the killings, the wounds and the short time between the deaths are consistent with orca predation. There are reasons why a shark’s liver is a delicacy. First, the thing is enormous. Second, it is packed with fat. This nutrient-rich liver is like an energy bomb and could be why orcas love it. Killer whales have a high metabolism and need dense nutrition to function.[8] 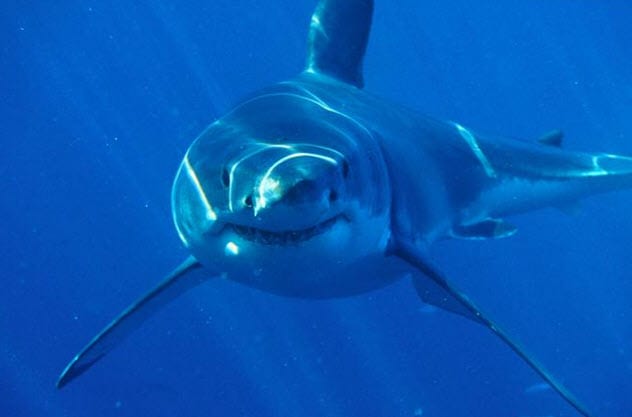 Researchers attached a tag to a great white in 2003. Then the female was released near southwestern Australia. The tag was meant to record depths and temperatures. In 2014, it was found on the beach 4 kilometers (2.5 mi) away from where it was originally attached to the shark.

The shark was gone. When the data was reviewed, it suggested a dramatic incident. Around four months after the tag was attached, the shark made a sudden dive. She reached a depth of 580 meters (1,903 ft). The temperature shot up from 8 degrees Celsius (46 °F) to 26 degrees Celsius (78 °F).

Clearly, the shark’s abrupt downward move was an attempt to flee something. The rise in temperature was likely the stomach temperature of whatever was brave enough to eat the almost 3-meter-long (9 ft) great white. 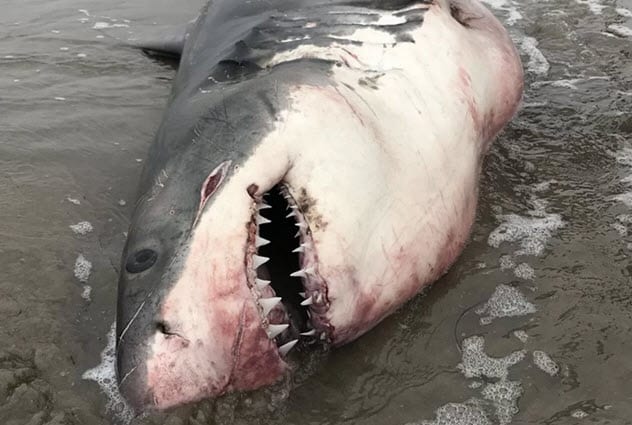 In 2018, a shark was found on California’s Beer Can Beach. At first, the reason for the 2.7-meter-long (9 ft) predator’s death was unclear. In fact, a news crew reported that the great white appeared uninjured.

The California Department of Fish and Wildlife (CDFW) did a necropsy and found .22-caliber bullets inside the animal. The wounds were not obvious, but one bullet had severed the spinal cord and killed the shark.

California law requires a special permit to hunt this vulnerable species. Since that had not been done, CDFW opened a criminal investigation. A few days later, an anonymous tip named the commercial fisherman who had shot the shark.

Investigators followed the advice on where to find the boat. During an inspection, they found several fishing violations on board. When questioned, Vinh Pham blamed another crew member for the shooting, but officers found the firearm in Pham’s truck. Tests matched the bullets to the rifle.

Eventually, Pham confessed. His reason for shooting the shark? It annoyed him that the creature had swum too close to his nets. Pham was convicted in 2019, fined $5,000, and placed on probation for two years.[10]