A lot of strange stuff happened this week. Don’t worry if you missed it because this list is here to catch you up. You can also click here to take a look at last week’s happenings.

This week, we examine two bizarre crimes, one of them involving an avocado grenade. We also learn about our ancient ancestors’ penchant for making “Cheerios” and smoking cannabis. Lastly, if you are a multimillionaire, you can start planning your space vacation aboard the ISS.

10 All Aboard The International Space Station 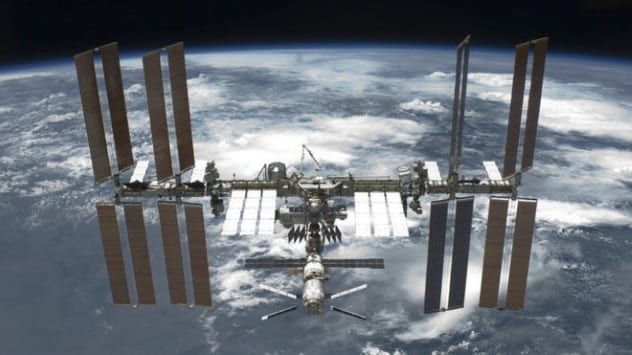 According to Robyn Gatens, deputy director of the ISS, there will be up to two missions per year which will carry multiple private astronauts to the station for up to 30 days at a time.

As you might expect, a space vacation will still be incredibly expensive, so it will not be available to your average Joe anytime soon. “Booking” the ISS will cost $35,000 per night, and this does not take into account the greatest expense, which is journeying to and from the station.

NASA says that private companies like SpaceX and Boeing will be in charge of traveling arrangements. They will also be responsible for the composition of the crew on each flight, as well as ensuring that the space tourists meet the medical and training criteria for such a journey. It is probable that these companies will charge private customers around the same as NASA astronauts for a two-way trip to the ISS, which is around $60 million per flight.[1] 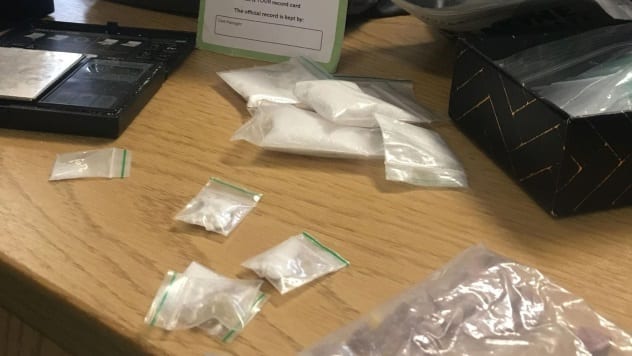 Police from Manchester, England, took to social media to thank a considerate drug dealer who left behind his stash alongside his name and address.

In the online post, cheeky authorities announced plans to reunite the hapless individual with the backpack that he forgot on the Bury line while traveling on the tram. Inside his rucksack were 25 tablets, large amounts of white powder and white rocks, and some scales.[2]

Fortunately for police, it should prove relatively easy to get in touch with the owner of the backpack because he also left behind his Community Payback card, which had his name and address. 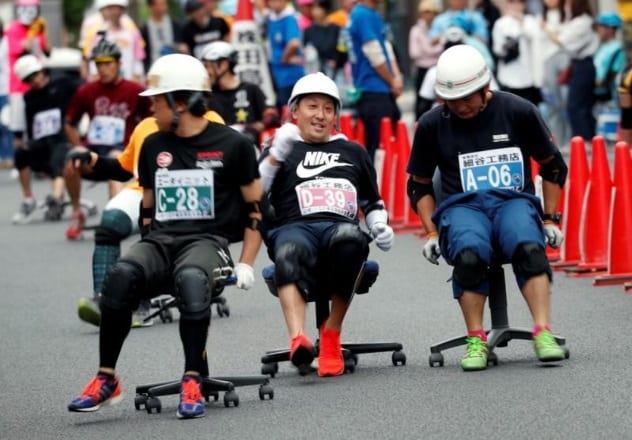 The small Japanese city of Hanyu kicked off the annual Isu Grand Prix, where competitors form teams of three and take part in endurance races while sitting in office chairs.

Inspired by Le Mans and Formula One, Tsuyoshi Tahara created the first event back in 2009. It proved to be pretty popular, and now, ten years later, 55 teams participated in the Hanyu Grand Prix, traveling from as far away as Wakayama, 600 kilometers (372 mi) to the south. Moreover, this was just the first of ten events that will take place across Japan this year.[3]

The teams used ordinary office furniture and had two hours to complete as many laps as possible of a 200-meter (656 ft) course. Although they were free to employ any method of propulsion they wanted as long as it used their own force, all racers relied on their legs to push the chairs backward. Many teams used a Le Mans-style rotation to keep each other fresh.

Last year’s winners, Kitsugawa Unyu, took first place again. Their prize was 90 kilograms (200 lb) of rice, which the racers struggled to lift due to fatigue. 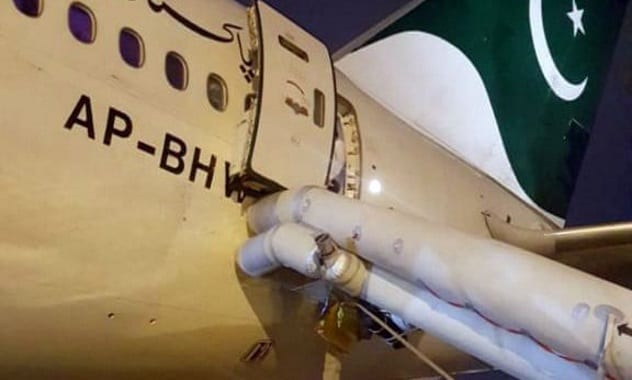 A flight from Manchester to Islamabad was delayed for almost eight hours after a passenger opened the emergency exit because she thought it was the toilet.

The Pakistan International Airways (PIA) flight was sitting on the runway, getting ready to depart, when the confused passenger had to use the restroom. She reached for the wrong door and triggered the emergency evacuation slide. Now, because the evacuation capacity of the plane had been reduced, 38 people had to voluntarily disembark and take a later flight.[4] And, of course, the mix-up had a domino effect that caused several other departures to be delayed at Manchester Airport.

Pakistani officials blamed the incident on a shortage of airline staff, which allowed the emergency exit to be opened. 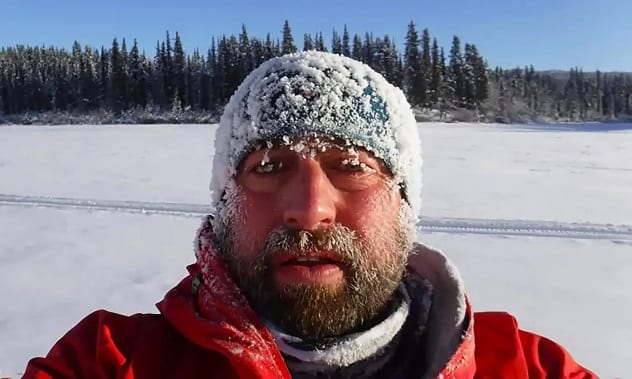 The Downtown Hotel in Dawson City, Yukon Territory, Canada, recently received a peculiar delivery: two human toes. Normally, this would be cause for concern, but the proprietors “couldn’t be happier.” That’s because the digits will be used in the hotel’s infamous “sourtoe cocktail.”

It is a tradition that started almost 50 years ago. Travelers who go to the hotel and visit the Sourdough Saloon can order the drink and join the “Sourtoe Cocktail Club.” Basically, it is an amputated toe floating in their alcohol of choice, typically whiskey. The rule is that the lips must touch the toe while drinking; otherwise, it doesn’t count.

The original toe is long gone, and the hotel relies on donations. They recently received two digits from Nick Griffiths, a British endurance athlete who lost three of them to frostbite during the Yukon Arctic Race.[5] His plan was to travel to the hotel with his toes, but his trip was delayed by months of rehab. Eventually, he got tired of keeping his toes in jars inside his bedside drawer and mailed them to Canada. He kept one as “insurance.” 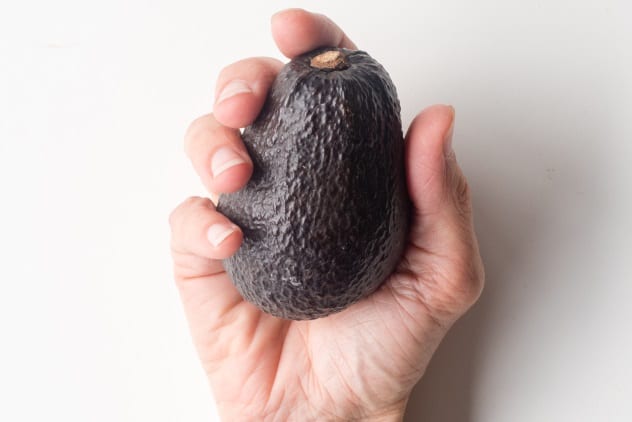 A man was arrested in Israel after robbing two banks and walking away with NIS 28,000 ($7,800). His weapon of choice was an avocado.

The 47-year-old robber first targeted a branch of Postal Bank in a shopping mall in Beersheba in mid-May. He walked up to the teller and presented her with a misspelled note demanding all the money in the drawer. He was holding a small, round object in his right hand and threatened to “throw this grenade” if she didn’t give him the money. The teller complied, and the robber successfully pulled off his first heist.

Although he hid his face from the cameras, police identified the man by looking at cell phone geolocation data from both robberies.[6] Although they have not released his name, authorities have arrested the man and confirmed that he has served time for robbery before. They also specified that the “grenade” he used in the crimes was an avocado painted black.


4 A Trip To Davy Jones’s Locker 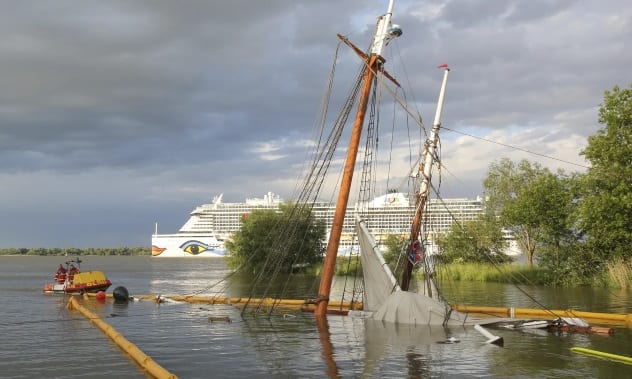 It is possible that the Elbe No 5 will never sail again. Shortly after its restoration, the 19th-century schooner collided with a container ship and sank.

Originally built in 1883, the Elbe No 5 was a 37-meter (121 ft) wooden vessel which guided larger ships into Hamburg port. During the 1920s, it was sold to American Warwick Tompkins, who used it as a houseboat. It came back to Hamburg in 2002.

Over the last nine months, the ship underwent extensive renovations, including a new stern and outer wooden planks, totaling around €1.5 million. Work was completed at the end of May, and the Elbe No 5 resumed duties as a tour vessel around Hamburg’s harbor.

This new gig did not last long, as the Elbe No 5 smashed into the Astrosprinter, a Cyprus-flagged container ship. Ostensibly, the cause of the accident seems to have been a failed tack that steered the wooden vessel directly into the path of the large ship.[7]

Forty-three passengers went into the drink. Fortunately, multiple rescue boats were in the vicinity, as they were attending to a minor accident nearby. They managed to save everyone with no fatalities but could not prevent the Elbe No 5 from sinking.

3 The Witches And Cheese Thieves Of Cambridge 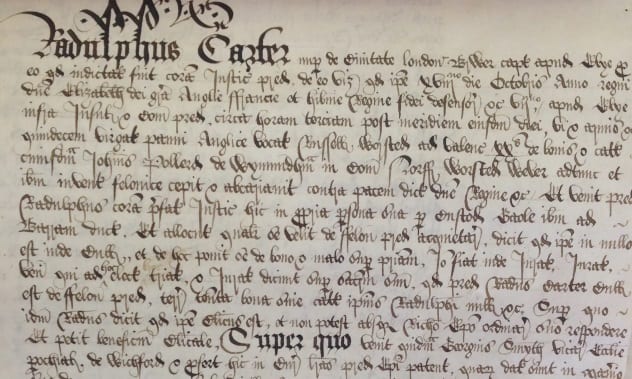 People will soon be able to get a unique glimpse into the past courtesy of the Cambridge University Library, which is cataloging for the first time hundreds of years’ worth of crimes that took place in Cambridgeshire and were tried at the assizes court on the Isle of Ely.

Before England had a permanent Crown Court, it had assizes. These were periodic courts which were presided over by visiting judges from London. Cambridge archivists are currently going over almost 270 files and rolls which detail the crimes in the diocese of Ely between 1557 and 1775. They hope to be finished by September 2020 and that they will be able to put the information online.

For many of the people mentioned in the documents, these are the only surviving records that can attest to their existence. Archivist Sian Collins enjoys the work because “many of these people, long dead and forgotten, [ . . . ] will now have a small piece of their story told.”[8]

The crimes range from petty to gruesome. A man named William Sturns, for example, was accused of stealing “three cheeses,” but he was found not guilty. At the other end, a woman named Cecilia Samuel was hanged for drowning her newborn baby. Other crimes were simply apropos of their time, such as Margaret Cotte, who was accused of causing the death of Martha Johnson through witchcraft. Somewhat surprisingly, she was found not guilty in 1577. 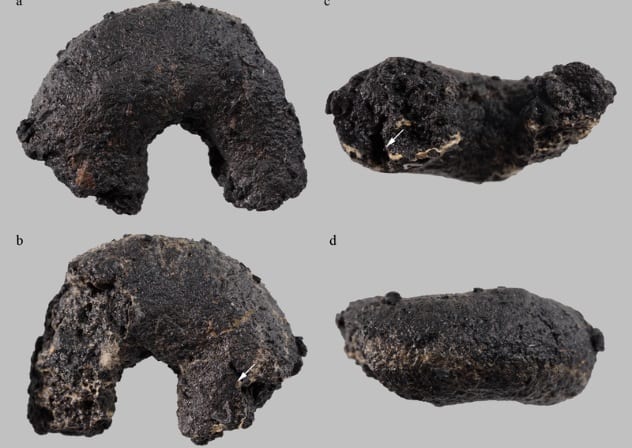 Austrian archaeologists have found 3,000-year-old “cheerios,” although their purpose is still a matter of debate.

Back in 1978, scientists excavated a Bronze Age site in Austria called Stillfried an der March. It contained 100 grain storage pits, and inside one of them, archaeologists found tiny, charred organic rings about 2.5 centimeters (1 in) in diameter.

Recently, researchers used radiocarbon dating and electron microscope imaging and discovered that the rings were made from a paste which consisted of ground wheat and barley mixed with water.[9] However, it does not seem that they were ever baked, or they were only baked at very low temperatures, just enough to dry them out.

Scholars are a bit puzzled regarding the purpose of the cereal bits. They could have been used as food, but their size and shape made them extremely time-consuming to prepare, especially since they wouldn’t have been terribly appetizing.

Instead, researchers believe it is more likely that they were used in a ritual. Inside the same storage pit where the cereal was found, there were also ring-shaped loom weights made out of clay. These were often placed in graves to take into the afterlife, so the organic “Cheerios” could have served as smaller imitations. 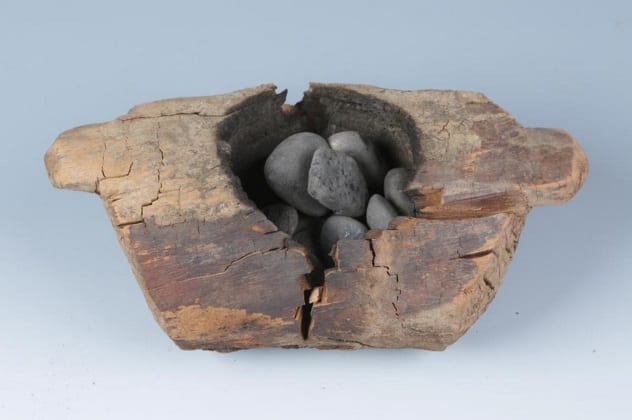 About 2,500 years ago, the ancient Chinese used to get high at funerals. Researchers believe they have uncovered the oldest evidence of cannabis-smoking in the world.

The proof comes in the form of ten wooden braziers recovered from Jirzankal Cemetery in the Pamir Mountains in China’s Xinjiang region. They contain stones with burn marks, while incense burners were found in the same area. Both the braziers and the burners had traces of marijuana chemical residue.[10] Also present were various artifacts used in ancient funerals and sacrificial ceremonies, suggesting that the smoking of cannabis was part of the funerary rites.

To detect the remnants of organic material, scientists used a technique called gas chromatography-mass spectrometry. They detected a higher level of THC than what is typically found in wild cannabis plants, suggesting that these particular plants were selected for their psychoactive potency.

We do have evidence of cannabis in use as far back as 4,000 years ago, but that was as a source of hemp rope and textiles and for oil seed crop. Archaeologist Yimin Yang from the University of Chinese Academy of Sciences believes this is the earliest unambiguous evidence of cannabis being used for its psychoactive properties.