Bonnie Parker and Clyde Barrow were two of the most notorious outlaws during the “public enemy era.” Alongside other members of the Barrow Gang, they robbed banks, fired guns, stole cars, and even committed murder. It was a true crime story that captured the nation during the Great Depression, and they were among the first celebrity criminals. Despite the blood on their hands, they won the hearts of many, as they were inseparable up until their gruesome deaths on May 23, 1934.

Even today, they are still romanticized by Hollywood, with interest in their crimes renewed since the release of Bonnie and Clyde, starring Warren Beatty and Faye Dunaway, in 1967. Yet, the real story of their infamous lives will always remain more shocking than any fictional account.

10 Bonnie Was Already Married To Another Criminal 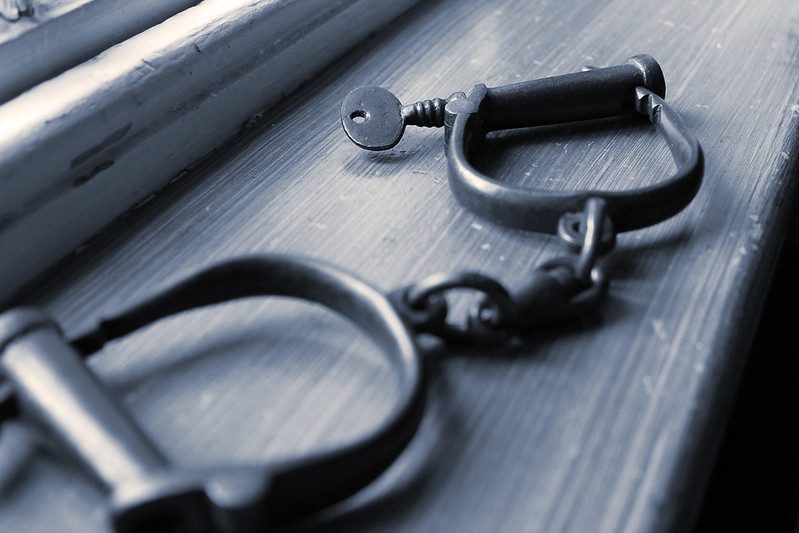 Born on October 1, 1910, in Rowena, Texas, Bonnie grew up in West Dallas. Before she met Clyde, she was married to her high school sweetheart, Roy Thornton. Bonnie was just shy of 16 years old on September 25, 1926, when she walked down the aisle after dating Thornton for just over a year. Due to his constant infidelity, the couple eventually separated but never divorced. Bonnie continued to wear her wedding ring and had a tattoo on the inside of her right thigh with two hearts labeled “Bonnie” and “Roy.”

In 1933, Thornton was imprisoned for armed robbery. The next year, Bonnie was killed. Thornton told the press that he was glad she went out that way. He was quoted as saying, “It was much better than getting caught.” In 1937, he was killed alongside another inmate at Huntsville State Prison as they attempted to escape.[1] 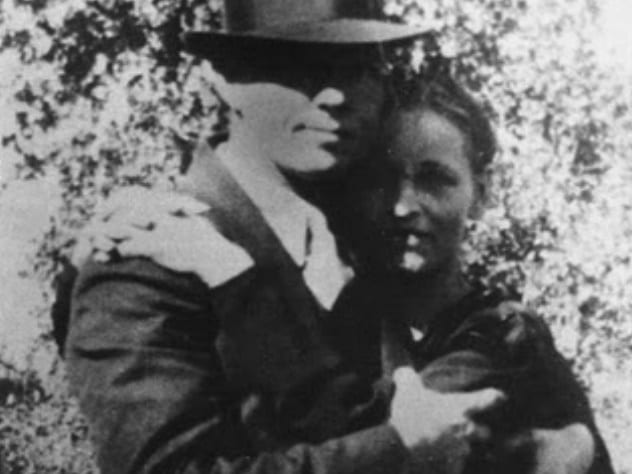 Clyde was born on March 24, 1909, in Ellis County, Texas, into a struggling farming family. During his teenage years, he was arrested with his brother, Marvin “Buck” Barrow, for handling stolen goods, namely turkeys. The brothers moved onto more serious crimes: breaking into safes, robbing stores, and stealing cars.

In January 1930, Bonnie was 19 years old and Clyde was 20 when they met. They fell madly in love, but after they’d spent just a few weeks together, Clyde was arrested for several criminal charges, including auto theft, and sent to Waco, Texas. A heartbroken Bonnie decided that Clyde was her soul mate, and she smuggled a gun to Clyde in prison. This enabled him to escape with several cellmates.

He was quickly recaptured and sentenced to 14 years behind bars. This time, he was sent to the notoriously harsh Eastham State Farm.[2]

8 Clyde Chopped Off His Toes In Prison 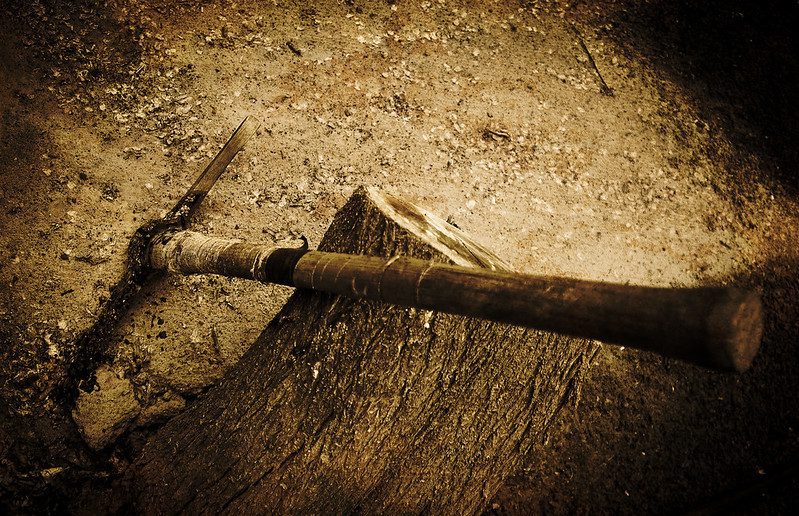 Life was tough at Eastham State Farm, as prisoners were handed heavy manual labor as punishment. Clyde was also repeatedly sexually assaulted by another inmate. In a desperate attempt to be transferred to another facility, he severed his left big toe and second toe with an ax. The mutilation wasn’t necessary, as a week later, he was paroled after his mother successfully petitioned for his release.

Clyde left prison a hardened man. As a fellow inmate said, he went from a “schoolboy to a rattlesnake.” In the book Running with Bonnie and Clyde by John Neal Phillips, his sister Marie said, “Something awful sure must have happened to him in prison because he wasn’t the same person when he got out.”[3]

Following his release, Bonnie was encouraged to cut all ties with Clyde, but their romance continued to blossom. In August 1932, Clyde was drinking with two associates in Stringtown, Oklahoma, when they were approached by a sheriff and his deputy. Clyde and one of his men opened fire and killed the deputy in cold blood. The sheriff was wounded. Clyde would spend the next two years on the run.

7 The Photos That Made Them Famous Were All Staged 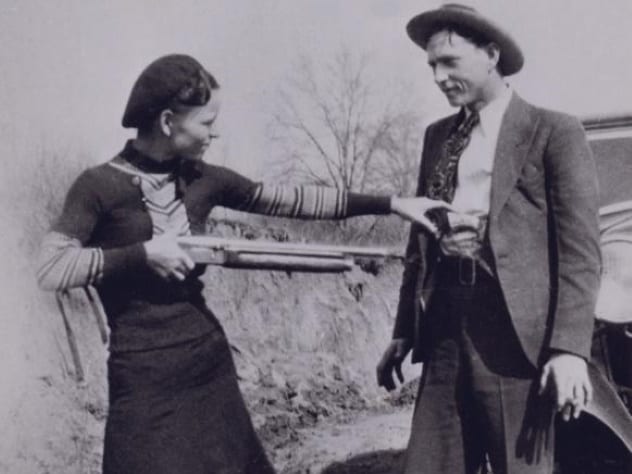 Formed in 1932, the Barrow Gang was made up of Bonnie, Clyde, Clyde’s brother Buck, his wife Blanche, W.D. Jones, Henry Methvin, Raymond Hamilton, Joe Palmer, and Ralph Fults. They were known to have killed 13 innocent victims during their crime spree between Texas, New Mexico, Oklahoma, Arkansas, and Missouri.

Bonnie loved to pose for photographs in which she would often be pictured smoking a cigar or wielding a gun. Former House of Representatives speaker Jim Wright, who grew up at the time of the couple’s crime spree, said, “You still would have to envy them a little, to be so good-looking and rich and happy.”[4]

However, the pictures were staged. They were not that wealthy, and Bonnie was the navigator, not the gun-toting moll the public recognized. This shameless self-promotion, however, turned them into one of the most romanticized couples of all time. 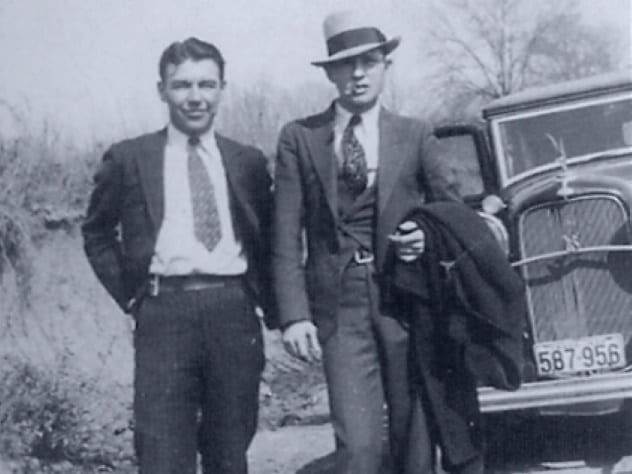 Bonnie and Clyde are known as two of the most notorious bank robbers of all time, yet in reality, they didn’t actually get away with a lot of cash. In two years, they robbed no more than 15 banks and often took as little as $80. On the run and with nine gang members to support, the haul was barely enough to go around. They were even known to break into vending machines to make up the extra money.

Go Down Together: The True Untold Story of Bonnie and Clyde author Jeff Guinn revealed that their crimes weren’t always about the money. He explained, “True, they robbed banks and shot it out with lawmen, killing some in the process. But in 1933, bankers and law enforcement officials, widely perceived to have no sympathy for decent people impoverished through no fault of their own, were considered the enemy by many Americans. For them, Clyde and Bonnie’s criminal acts offer a vicarious sense of revenge. Somebody was sticking it to the rich and powerful.”[5]

5 Bonnie Foreshadowed Her Own Death In A Poem 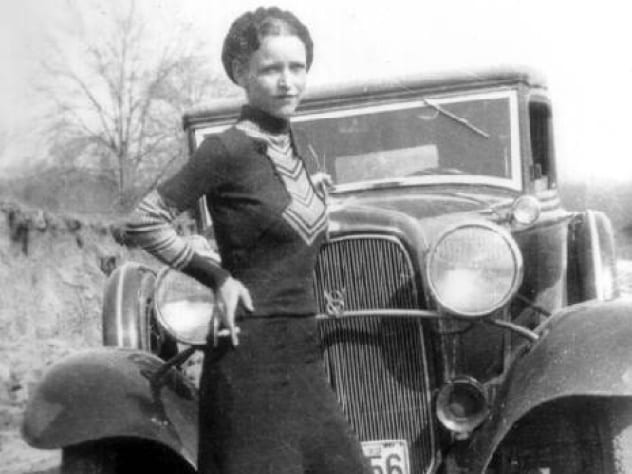 In July 1933, the gang broke into the National Guard armory in Enid, Oklahoma, and stole five automatic rifles and 10,000 rounds of ammunition. They were heavily armed and more lethal than ever before. On Easter Sunday the following year, the gang opened fire on two police officers named E.B. Wheeler and H.D. Murphy. Tragically, it was Murphy’s first day on the job, and he was just two weeks away from his wedding. It was time for authorities to ramp up their efforts in capturing the couple.

Bonnie enjoyed writing poetry in her journal. One poem foreshadowed her own death; she likely realized that time was running out, as authorities were determined to successfully capture the gang. She wrote:

Some day they’ll go down together
they’ll bury them side by side
to few it’ll be grief
to the law a relief
but it’s death for Bonnie and Clyde.[6]

4 Clyde Lived And Died Beside His Saxophone 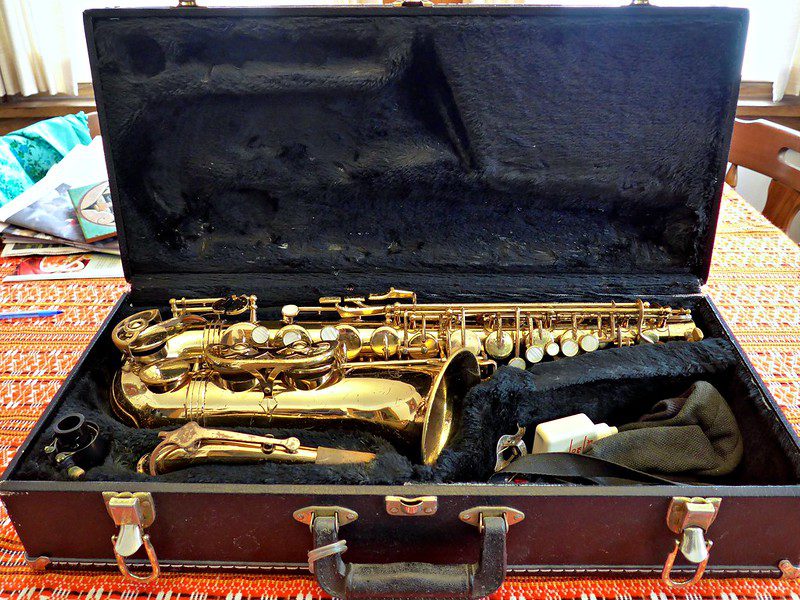 Clyde was a talented musician who could have been a household name for very different reasons, but he chose the wrong path. His youngest sister Lillian Barrow recalled, “[He] undoubtedly enjoyed bringing happiness into the lives of others sentenced by poverty to the West Dallas campgrounds. It was also during this period that Clyde took his natural music ability a bit further when he discovered saxophone.”[7]

On May 23, 1934, Bonnie and Clyde were gunned down during a police ambush as they drove down a road in Bienville Parish, Lousiana. Six members from Texas and Louisiana police departments enlisted the help of gang member Henry Methvin’s father—he stood by the side of the road, and when the couple recognized him, they pulled over.

The police opened fire on the stolen Ford V8, and Clyde was instantly killed by a shot to the head. The police emptied 130 rounds of ammunition into the car, shooting the couple more than 50 times each. Bonnie and Clyde died together alongside his precious saxophone, which he always kept in the car. 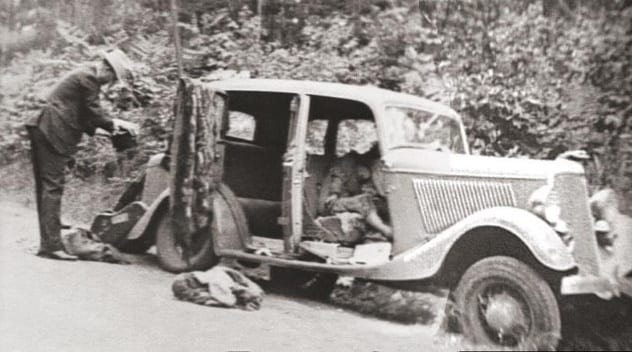 When news spread that two of the most well-known outlaws had been killed, locals began collecting “souvenirs” from the grisly scene. When the coroner finally arrived, he saw that, “Nearly everyone had begun collecting souvenirs such as shell casings, slivers of glass from the shattered car windows, and bloody pieces of clothing from the garments of Bonnie and Clyde. One eager man had opened his pocket knife, and was reaching into the car to cut off Clyde’s left ear.”[8]

The population of the Northwest Louisiana town jumped from 2,000 to 12,000, and the beer price had doubled within hours as people gathered to hear about the final moments of Bonnie and Clyde. Henry Barrow had arrived to identify the body of his son and then wept in a chair. Undertaker C.F. “Boots” Bailey later revealed that he had difficulty embalming the bodies due to the number of bullet holes. 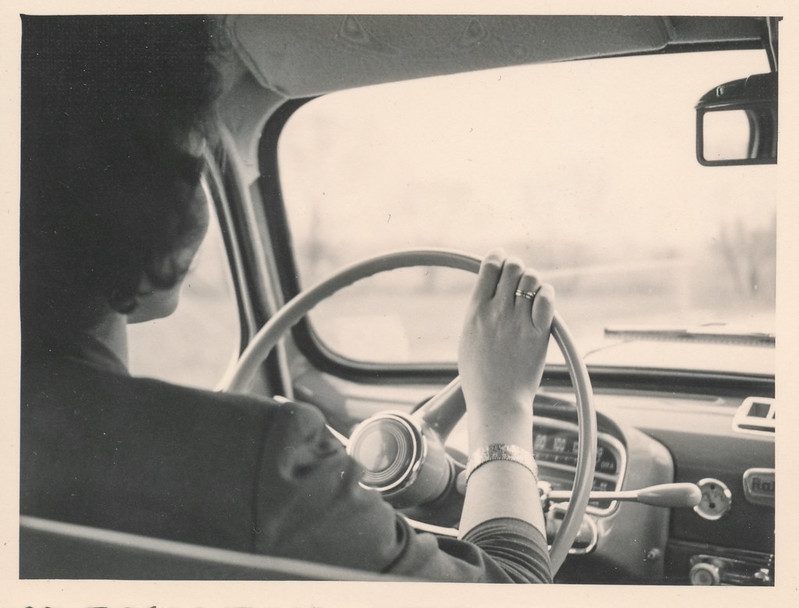 Following the death of Bonnie and Clyde, the US government put more than a dozen of their family members and close friends on trial as their alleged accomplices. Prosecutor Clyde O. Eastus was convinced that Clyde’s mother, Cumie Barrow, was the real ringleader of the Barrow Gang. In court, he pointed directly at her and announced, “She is the ringleader in this conspiracy!”

Cumie did admit that she regularly met with her son and Bonnie to provide them with food, clothing, and shelter. According to a log on her wall at home, she met with the couple 20 times between December 1933 and March 1934. Cumie had previously defended her son and believed he never hurt anyone. She told Dallas’s Daily Times Herald, ” ‘Son,’ I said, ‘did you do what they say in the papers?’ And he said, ‘Mother, I haven’t never done anything as bad as kill a man.’ ” She stressed, “Clyde . . . isn’t a . . . murderer.”[9]

Cumie was sentenced to 30 days in jail.

1 Their Wish To Be Buried Together Was Denied 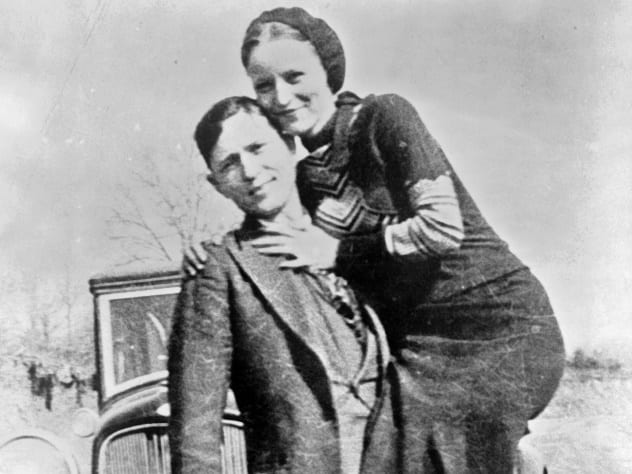 Inseparable during their final years, Bonnie and Clyde’s last wish to be buried next to each other was not granted. Bonnie is buried at Crown Hill Memorial Park in Dallas, and Clyde is buried 14 kilometers (9 mi) away at Western Heights Cemetery. Bonnie’s niece, who is her last living blood relative, said, “Their desire was to be buried side by side. I think that’s the way that it should be. They made a spot next to Clyde for Bonnie back then. It’s still there.”

The reason behind their separate burials was that Bonnie’s mother had never approved of her daughter’s relationship with Clyde. Bonnie’s niece explained, “I can’t blame my grandmother for saying no at the time.” She added, “You would be surprised how many times we are approached by those who ask why weren’t they buried together? Why can’t they be buried together?”[10]

A memorial dedicated to the police officers who killed Bonnie and Clyde remains standing at the last stop at which the couple was alive together before they were gunned down.