When the topic turns to terrible television series, we often find ourselves walking a tightrope of wet tissue. Some would argue for Cop Rock (1990), Steven Bochco’s musical police drama.

Others contend that the undisputed winner is The Flying Nun (1967–1970), which featured diminutive Sally Field as Sister Bertrille in a Puerto Rican convent. Thanks to brisk island winds and her starched cornette, she defied the laws of aerodynamics.

See Also: 10 Failed TV Shows That No One Should Have Approved

But certain shows are light-years beyond the average syndicated coprolite produced by the world of television. In fact, their horrendous quality approaches the sublime. 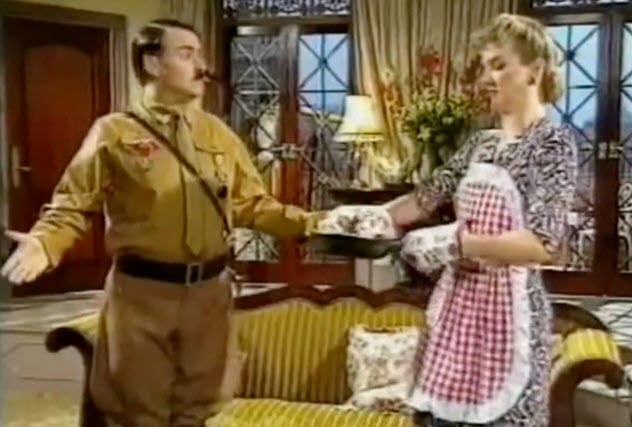 Purporting to be a recently rediscovered “lost sitcom” from the 1950s, this British series was an effort by writer and producer Geoff Atkinson to parody American sitcoms “that would embrace any idea, no matter how stupid.” Atkinson captured the dullness of his intended target right down to the inane theme music and obligatory applause greeting every character’s entrance.

The premise of the series, set in 1937, has Adolf Hitler and Eva Braun as a typical suburban couple living in Berlin. Much of the comic misadventure arises from their next-door Jewish neighbors, Arny and Rosa Goldenstein.[1]

However, the Holocaust and the estimated 70–85 million total deaths from World War II proved tough material for punch lines. This horribly inappropriate sitcom was canceled after one episode. 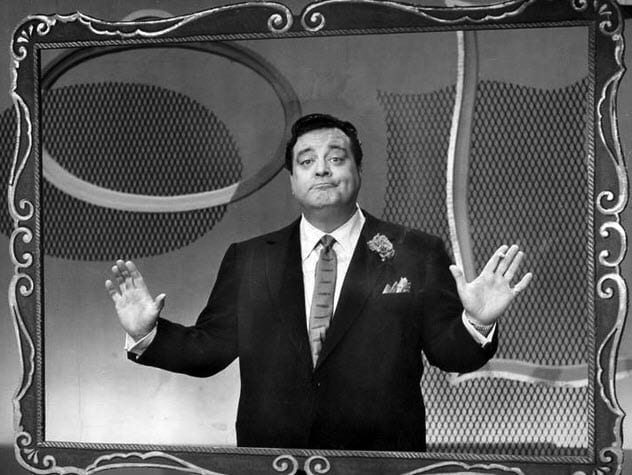 Jackie Gleason (1916–1987) was an extraordinary talent, as shown in his classic TV sitcom The Honeymooners and his performances in memorable films like The Hustler (1961), Requiem for a Heavyweight (1962), and Soldier in the Rain (1963).

However, no career of any longevity can escape the scarring of a major debacle. For Gleason, it came on the game show You’re in the Picture.

The format of the show involved a panel of four celebrities inserting their heads into holes cut out in life-size pictures depicting well-known song titles, historical events, or popular expressions. Unable to see the illustrations, the panel would try to guess the content of the pictures based on questions directed at Gleason.

Part of the problem was the illustrations themselves. While one tableau depicted the popular song “Itsy Bitsy Teenie Weenie Yellow Polka Dot Bikini,” another represented “The Burlesque Beef Trust Girls,” a vaudevillian chorus line of beautiful women. That last one left the celebrities and home viewers scratching their heads.

Still, the major problem was Gleason. For all his talent, he lacked the folksy demeanor of Garry Moore or the comic sensibilities of Groucho Marx. Critics roasted the debut episode unmercifully, with Cecil Smith of the Los Angeles Times calling it “an insult to the audience.”[2]

The criticism was not lost on Gleason. Those who tuned in for the second episode found Gleason sitting on a bare stage where he spoke directly to the camera:

There’s nothing here, except the orchestra and myself. [ . . . ] We have a creed tonight, and the creed is honesty. [ . . . ] Last week, we did a show that laid the biggest bomb—it would make the H-bomb look like a two-inch salute.


8 The Secret Diary of Desmond Pfeiffer
1998 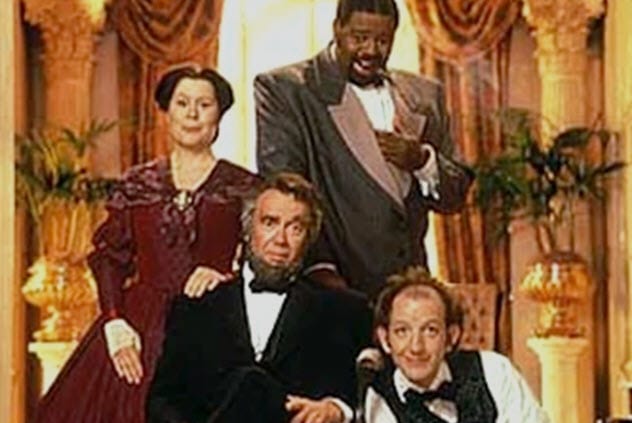 Efforts by American television executives to refashion successful British series for U.S. audiences have produced some spectacular successes. However, UPN’s The Secret Diary of Desmond Pfeiffer, although inspired by BBC’s Blackadder the Third, managed to provide viewers with a first-class window seat on the Hindenburg.

Through a series of misadventures, Pfeiffer (Chi McBride), a black British aristocrat, finds himself employed as Abraham Lincoln’s manservant. However, Lincoln and the members of his cabinet are such twits that they couldn’t win a game of checkers if they were playing against a dead hamster. So the business of beating the South, saving the Union, and ending slavery is left to Pfeiffer.[3]

Even before the show aired, the network drew criticism for trivializing the issue of slavery. Protests organized by the NAACP were held in front of Paramount Studios.

For the show’s creators, Barry Fanaro and Mort Nathan, the issue wasn’t race. Instead, it was sex and politics with an eye toward Bill Clinton’s presidency, then in his second term.

UPN both debuted and dropped the series in October 1998. In 2002, TV Guide ranked The Secret Diary of Desmond Pfeiffer as the 11th-worst TV series ever. 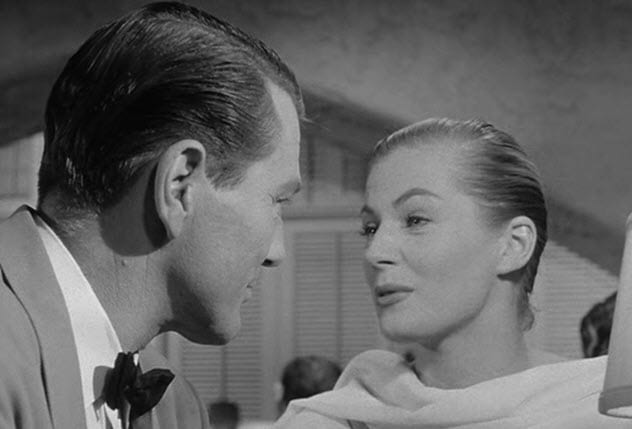 Adapting cinematic blockbusters for television audiences seems a surefire way for producers and networks to hedge their bets in the battle for market share. However, except for rare successes like M*A*S*H (1972–1983) and Buffy the Vampire Slayer (1997–2003), it usually doesn’t work out well.

Case in point: the two attempts at repackaging the 1942 film classic Casablanca for American TV sets. The first undertaking was an effort by Warner Bros. Studios to gain a foothold in the “new” medium of television.

During the 1955–56 season, the studio broadcast three different series in rotation under the heading of Warner Bros. Presents. The concept was dubbed a “wheel program.” Two series were based on films produced by the studio—Kings Row and Casablanca.

In the 1955 Casablanca TV series, the role of “Rick,” played by Humphrey Bogart in the film, nearly went to a rising young star named Anthony Quinn. But the studio refused his salary demands. Instead, “Rick” was played by Charles McGraw, who is best remembered today as the contrarian fisherman in the diner from Alfred Hitchcock’s The Birds (1963).

Returning to Casablanca, the decision was made to “update” the action to set it in the “present day” of the 1950s. As a result, the ruthless Nazis of World War II became the ruthless communists of the Cold War.[4]

Casablanca (1955) was canceled after its first season.

It took almost 30 years for Warner’s second attempt at relocating Rick’s Cafe Americain to TV screens in the United States. The second series returned the action to the early days of World War II, and this time, care was taken in the casting.

The role of Captain Renault was ably filled by Hector Elizondo, Ray Liotta tended the bar as Sacha, and Scatman Crothers played the piano as Sam. David Soul, who had become a TV icon in Starsky and Hutch, was cast as the brooding Rick.

Still, the NBC series never succeeded in freeing itself from the shadow of the original movie, and the show was pulled after three episodes. The last two unaired episodes were burned off during the summer.[5] 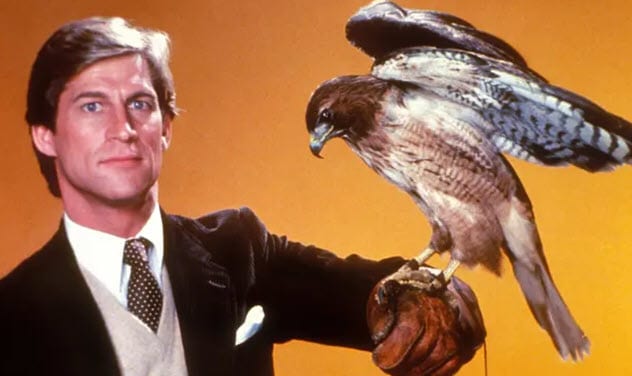 Due to budget constraints in the eight episodes that aired before the series’s cancellation, Chase’s shape-shifting was limited mainly to a sizable black panther.[6]

Considered one of the worst science fiction shows of all time, Manimal had the dubious honor in 2004 of being ranked by the British trade magazine Broadcast as the fifth-worst television program ever exported by the U.S. to the UK. It was beaten out by Baywatch, The Anna Nicole Show, The Dukes of Hazzard, and Wild Palms.

Despite its infamy, or perhaps because of it, there have been persistent rumors of Manimal receiving the big-screen treatment as a possible Will Ferrell project.

My Mother The Car Pilot Opening/Closing Theme and Credits

The NBC series My Mother the Car fit right in. When attorney David Crabtree (portrayed by Jerry Van Dyke, Dick’s brother) goes shopping for the family’s second car, he finds himself inexplicably drawn to a dilapidated “1928 Porter” touring car.

After purchasing the aged jalopy and driving it home, he is thrown into a stammering, wide-eyed fluster when the antique auto begins speaking to him via its dashboard radio. The Porter turns out to be the reincarnation of Crabtree’s deceased mother, Gladys. And that was pretty much the comedic benchmark for the show.[7]

Car enthusiasts were quick to point out that Van Dyke’s four-wheeled costar, for which Ann Sothern provided the voice, was actually a Model T touring car.

The sitcom took a detour to cancellation after a single season. 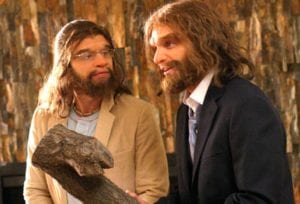 We are used to seeing Hollywood pictures revamped and rebooted for the small screen as TV series. These programs are interrupted by commercials filled with slogans and mascots pitching their products and services to the American consumer. Occasionally the characters in these commercials trade their humble 30-seconds for an expansive 30-minute sitcom.

This was the journey taken by the cavemen made famous in a series of commercials for GEICO insurance, which gave rise to the series Cavemen. The cavemen were first introduced in a 2004 commercial which claimed that Geico’s website was so easy to use, “a caveman could do it.” The success of that 15-second spot spurred GEICO to air additional commercials featuring two cavemen who took offense at GEiCO’s slogan. The commercials were so popular that the ad agency pitched the idea for a sitcom.[8]

Set in San Diego, Cavemen showcases the lives of three—you got it— cavemen: Joel (Bill English), Nick (Nick Kroll), and Andy (Sam Huntington). Living among homo sapiens for the first time, they face racial prejudice and pressure from the rest of society. Even though they are ordinary guys with regular jobs and girlfriend troubles, their comments about and efforts to experience the modern world fall short, leaving behind few laughs and further cemented stereotypes.

ABC canceled the series after only six episodes.

Walter Hathaway (Jack Weston) and his wife, Elinore (Peggy Cass), help out family friend and theatrical agent Jerry Roper (Harvey Lembeck) with an unusual problem. Soon to be off on an overseas tour, Jerry needs to find a home for his “kids.”

So, Walter and Elinore eagerly sign on as foster parents to Candy, Charlie, and Enoch. The fact that these children are chimpanzees doesn’t seem to matter in the least.

Directed by Steve Binder, the Star Wars Holiday Special is the tale of Chewbacca and Han Solo trying to return to Chewbacca’s homeworld, Kashyyyk, in time to celebrate “Life Day” (their version of Christmas). In this universe of schmaltz, Harrison Ford, Mark Hamill, and Carrie Fisher find themselves in the same galaxy as Diahann Carroll, Art Carney, Bea Arthur, and Harvey Korman.

For the first time, we meet Chewbacca’s wife, Malla; his son, Lumpy; and his aged father, Itchy, back on Kashyyyk. Some of the original Star Wars characters are seen in archival footage of the movie. But it is the injection of the veteran television personalities that adds a surreal gloss to the whole enterprise.

It starts when Saun Dann (Carney), a family friend, arrives with Life Day gifts in hand. Itchy receives a computer disc that offers a performance by Diahann Carroll singing “This Minute Now.”

Other weirdness follows, including Korman as a four-armed alien cook. There are additional musical interludes, including a music video by Jefferson Starship. The special concludes with Chewbacca back in the arms of his loved ones as Princess Leia (Fisher) gives a short speech on the meaning of Life Day. It ends with her singing a celebratory song.

The special was called “the worst two hours of television ever” by David Hofstede, author of What Were They Thinking?: The 100 Dumbest Events in Television History. George Lucas denied any involvement with it.[10]

For more lists like this, check out Top 10 Worst Television Spinoffs of All Time and Top 10 Terrible TV Movie Adaptations.

Top 10 Face-offs in Fiction To Make You Cry