Stars made almost all the matter we enjoy today, so you could say they’re important. Either by exploding in nuclear hellfire or by smashing into each other, various stellar bodies created the elements that make the Internet—and the people who invented the Internet—possible.

Stars do all sorts of crazy things. Like belch massive clouds of gas, outshine entire galaxies in a second, eat their companions to regain life, and bend the laws of physics in other awe-inspiring ways.

10 A Star Belches Before It Explodes

Supernovae usually fade after weeks or months, but fast-evolving luminous transients (FELTs) “flash in the pan [and] then disappear” in a few days.

Like the 1.3-billion-light-year-distant KSN2015K which went off 2.2 days before reaching peak brightness and then faded away after three weeks. This is just one-tenth as long as would be expected from a type Ia supernova, whose newly gained radioactivity gives it a brilliant glow.

But a year before KSN2015K’s kaboom, it released a puff of gas, or stellar belch. When it finally exploded, its ejected star guts slammed into the spreading burp cloud and lit up the sky with a quick but magnificent flash.[1] 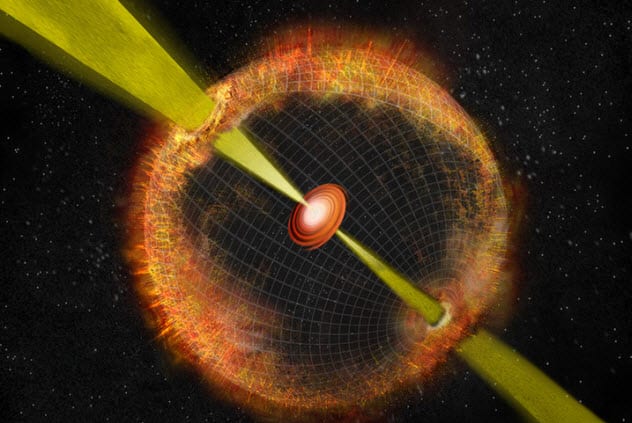 In the early 1990s, astronomers spotted a stupendously bright radio source that rivaled the strongest in the universe. The mysterious signal then faded over the next 23 years. It was the first discovery of an “orphan” gamma-ray burst (GRB), or the afterglow of the baddest explosions in the cosmos.

Regular GRBs last about a minute and are thought to occur as neutron stars or black holes collide or as stars collapse into black holes. But this long-duration event shows that a GRB can also happen at the other end of the time spectrum.[2]

It originated from a chaotic star-birthing (and deathing) region 284 million light-years away that was full of energetic bursts and deadly magnetars. It’s one of these magnetars, the corpse of a star 40 times more massive than the Sun, that likely caused the GRB. 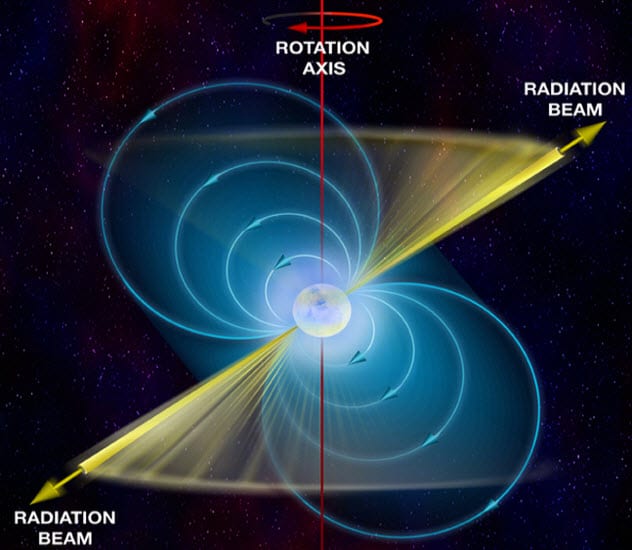 About 28,000 light-years away in the constellation Sagittarius resides a globular cluster called Terzan. Hidden inside is a neutron star that spins 716 times per second.

In other words, this thing that’s approaching the mass of two Suns, all squashed down into a ball 32 kilometers (20 mi) across, is spinning twice as fast as your blender.[3]

The 716-hertz neutron star, PSR J1748-2446ad, is at its size limit. If it were any larger, its insane spin would fling pieces of itself into its own orbit.

7 A White Dwarf Revives Itself By Eating Its Friend 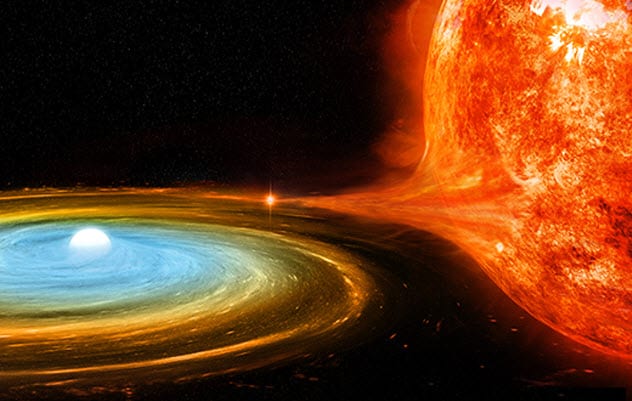 X-rays can be soft or hard. Soft ones require several-hundred-thousand-degree gas, but hard ones come from cosmic furnaces that achieve tens of millions of degrees.[4]

Now there are weird supersoft X-rays coming from a white dwarf. Fusion was one possible explanation, but ASASSN-16oh isn’t fusing anything. Instead, the X-rays are probably produced by the impact shock of matter as the white dwarf siphons material from its partner star.

It will continue to gorge on its sibling until it overeats and supernovas both stars to death.

6 A Neutron Star Scorches Its Companion 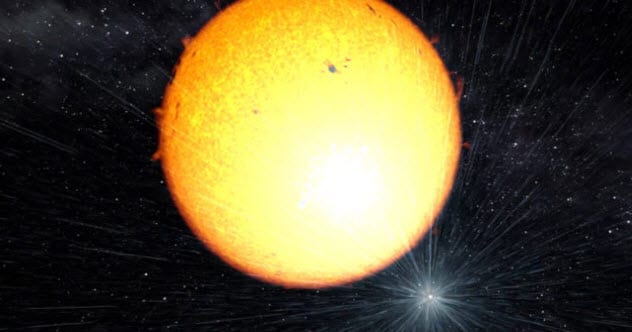 Neutron stars can only become so massive, but astronomers have recently discovered a body that pushes these specs. The former most massive neutron star, PSR J0348+0432, weighed 2.01 solar masses.

And it has a cute little companion star of only 0.33 solar masses. They’re so close that they swing around each other in just 4.14 hours as big brother PSR blasts its tiny buddy with intense radiation that leaves one side in constant shade and the other glowing with radioactivity.

5 A Star Births Its Partner 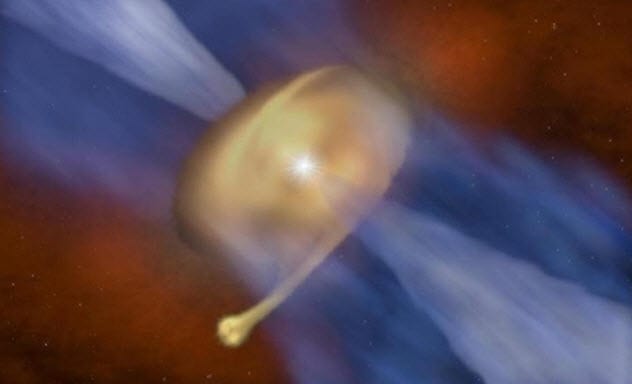 Researchers found a disk around star MM 1a. They looked inside and found not planets but a whole baby star, MM 1b.

By analyzing the frequency of light from the disk and measuring the radiation, astronomers ascertained that MM 1a is an impressive 40 solar masses while fledgling MM 1b is a measly half a solar mass.[6]

That’s some discrepancy. It probably occurred because the gas-and-dust disk was too massive and its beastly gravity tore it into fragments.

But the big MM 1a is so beefy that it ensures a short life span for the entire system because massive stars live short lives before exploding magnificently in supernovae. 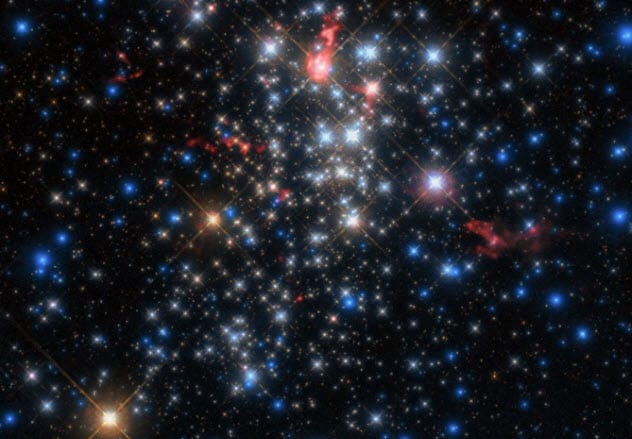 Comets streak across the sky, and some stars do the same thing on a larger scale. Like the giant, ultrahot stars in Westerlund 1, a 12,000-light-year-distant stellar cluster inside the Milky Way.

Comets earn their tails when they’re hit by the solar wind, the stream of charged particles blasting from the Sun. So they always stretch away from the Sun.

Star tails behave similarly. But they stretch away from the center of the cluster as they’re pulled like cotton candy by intense radiation from the many supremely brilliant adolescent stars.[7] 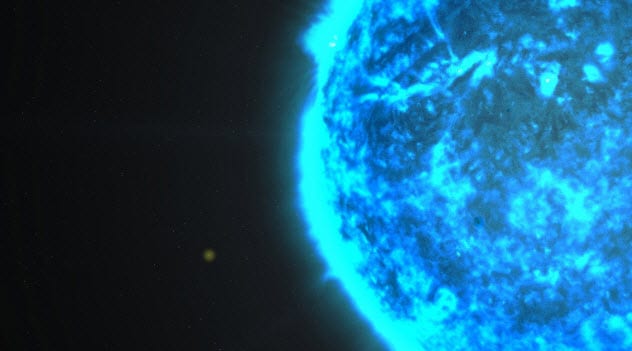 Blue Large-Amplitude Pulsators (BLAPs) are odd stars that don’t behave like their friends. Instead, these BLAPs are smaller than their blue-ness would suggest. Crazier still, they rapidly dim and then brighten.

A gravitational lens survey has picked out about 12 BLAPs from a litter of about a billion observed stars, and they’re unlike anything else.

As they pulsate, they vary in brightness by up to 45 percent and do it all on time spans of 20 to 40 minutes. That’s the equivalent of the Sun freezing and then boiling us, all during a standard-length TV show.

Scientists aren’t sure how BLAPs work, but they may be a weird type of merged binary star. Alternatively, they could have been much puffier blue stars that somehow lost their outer layers.[8]

2 A Dead Star Gets A Halo 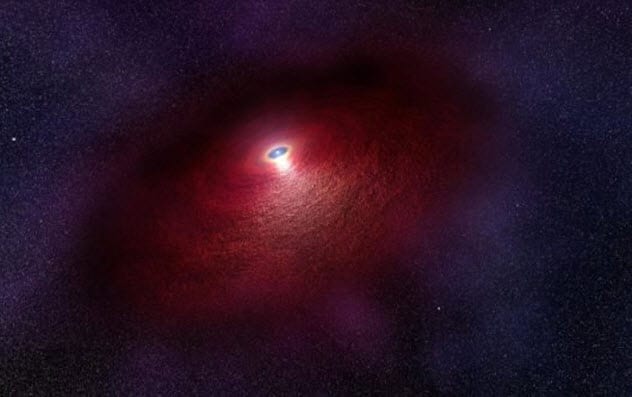 Neutron stars blast out X-ray and radio emissions, so those are the wavelengths that researchers observe.

But a weird new neutron star, RX J0806.4-4123, is so mysteriously hot that it’s emitting a significant infrared signature all the way out to 200 AU, or five times the (average) Sun-to-Pluto distance.

And it’s probably a sight to behold. The unexpected heat could be from a giant disk of material that was thrown out by the supernova explosion and then fell back in around the neutron star.

Another equally unprecedented possibility is that the star’s magnetic field is flinging charged particles into space. As the whole thing moves through the universe, the particles create shocks when they smash through interstellar dust and gas.[9] 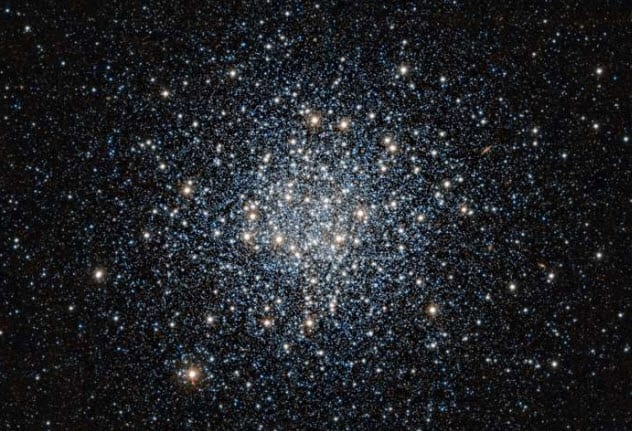 Star clusters gradually break down as material seeps away, but scientists have found a more sudden, violent mode of dissipation. A neutron star can find itself speeding away through space at hundreds of kilometers per second after being booted from its gas cloud.

Simulations show that, even though neutron stars only account for 2 percent of a star cluster’s mass, this “natal kick” can provide the impetus for a cluster to break apart four times faster than normal. So these tiny but massive monsters can dictate the future course of innumerable stars and groups of stars throughout the universe.[10]

Ivan writes about cool stuff for the Internet. You can contact him at [email protected].

Read about more stellar facts and mysteries that will amaze you on 10 Stellar Facts About NASA’s Mission To The Sun and 10 Unsolved Stellar Mysteries In Our Galaxy.