It’s amazing that Australians are so laid-back when their whole country is infested with animals that can kill a human being quicker than a person can crack open a Foster’s beer and say, “Crikey!” These deadly animals traverse the land looking for prey or lie in the depths of the ocean waiting to pounce on an unsuspecting fish or human. You might not be able to see them coming, but here’s a look at the animals and places of which you should be wary in Australia. 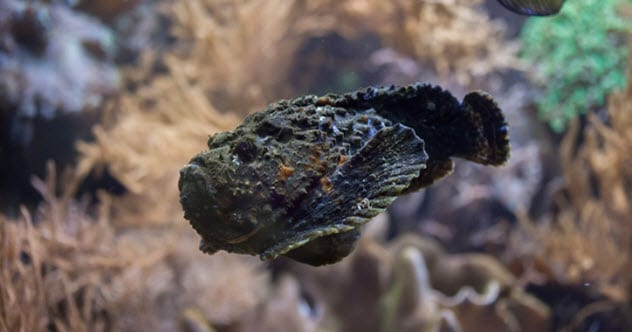 You wouldn’t think that a fish would be that deadly. Most of us keep them in a bowl in a room and give them names like Nemo or Bubbles. This isn’t the case with the stonefish, which is considered to be the deadliest fish in the world.

Its name comes from its ability to camouflage itself within a coral reef (or, in this case, the beautiful Great Barrier Reef). In fact, the stonefish can come in a range of colors depending on its habitat.

Although it mostly eats other small fish, you may end up swimming with the fishes if it comes into contact with you. The fish’s dorsal fin has spines that are sharp enough to pierce the soles of boots (as well as skin). These spines contain venom sacs. If they pierce human skin, it may cause intense pain[1] that lasts for several hours.

But it gets much worse: You would then experience shock, hypertension, paralysis, and finally death. Doesn’t sound like the kind of thing you’d want to catch on the end of your fishing pole! 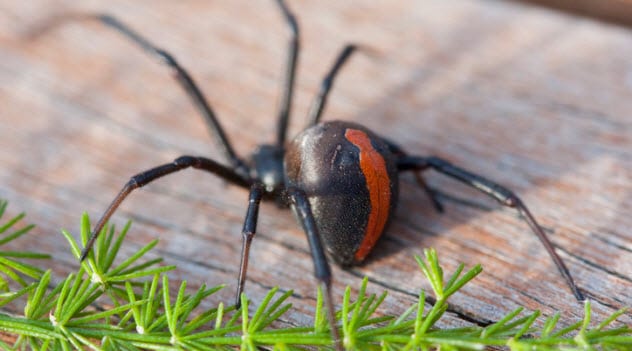 Here’s the first of the eight-legged freaks appearing on this list, and it has to be one of the coolest-looking ones. Redback spiders are located throughout Australia. The creature’s name comes from the bright red stripe[2] that covers the abdomen of the female spider as something of a warning.

The bite of the spider can cause a range of symptoms including muscle rigidity and twitching, vomiting, labored breathing, rapid heart rate, hypertension, weakness, and sweating. The venom may also cause death unless it is quickly treated with antivenom. The fact that these spiders are found throughout Australia means that you’ll be double-checking every single thing that’s red. 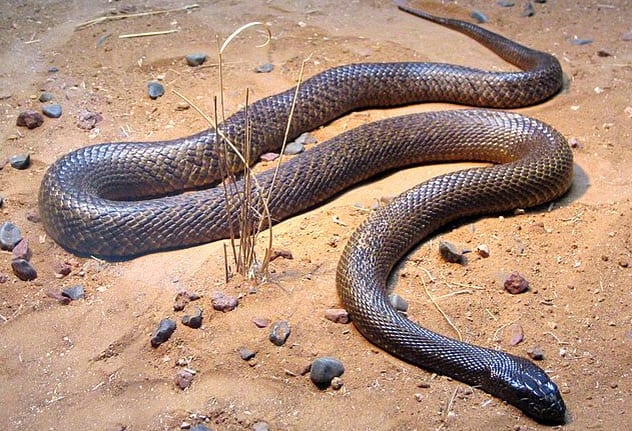 Native to Australia, the inland taipan is a brown snake that blends in with the desert environment in which it lives. These snakes can grow to more than 2.5 meters (8.2 ft).

The venom within the snake’s 12-millimeter (0.5 in) fangs can kill almost 100 men[3] with a single drop! With just one bite, they can slow down a man’s heart rate gradually and increase the possibility of a stroke. The only saving grace is that these snakes are largely found in less populated areas. But that doesn’t really make it any better. 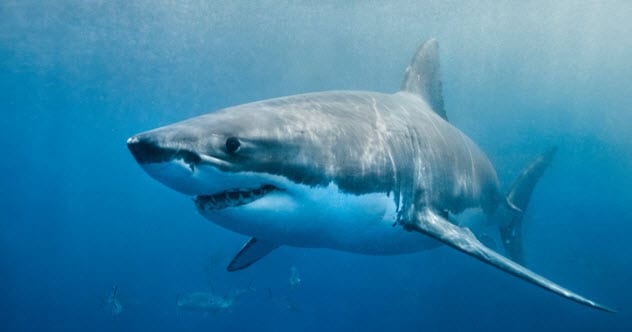 The great white shark makes us look into the black darkness of the ocean and take a big gulp thinking of how many are circling around us. Too many times we’ve watched Jaws and thought we’d never go near the ocean again.

Great whites can grow over 6 meters (20 ft) long and weigh up to 1,800 kilograms (4,000 lb), big enough to kill multiple people. There have been almost 700 unprovoked attacks[4] involving great whites in Australia. Around 200 of these attacks were fatal; almost 400 caused injuries. Their teeth are basically a set of over 100 custom-made knives that can rip you in half quicker than you can put a shrimp on the barbie! 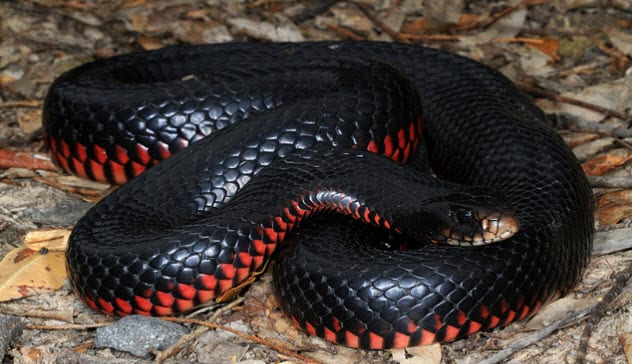 It seems to be a recurring theme that the color red signifies a deadly animal in the Land Down Under. The red-bellied black snake, which lives on the eastern coast of Australia, can grow up to 2 meters (7 ft) long.

With its black exterior, the snake blends into the night[5] when hunting both us and its normal diet of frogs. But the snake’s bright red belly shows in the night like a nightclub’s neon lights. The venom from its bite can cause skin cells to die off. It can also cause kidney failure and death if not treated quickly with antivenom. 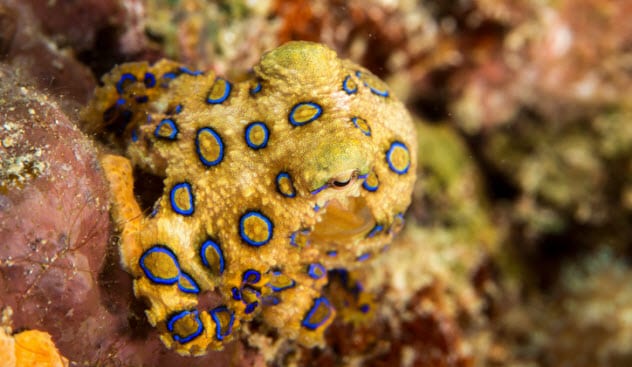 The blue-ringed octopus is a sea animal that seems like it’s straight out of an Alien film or Pirates of the Caribbean. With its beak and long, tentacle-like arms, this octopus is most likely to be seen while it’s lying around not doing much.

But when it senses danger, it lights up like fireworks on the Fourth of July with blue rings and lines along its body. If those warning signs aren’t visible and you come into contact with its venomous bite, then you will suffer muscle weakness, respiratory failure, and probably death. There is no known antivenom.[6] 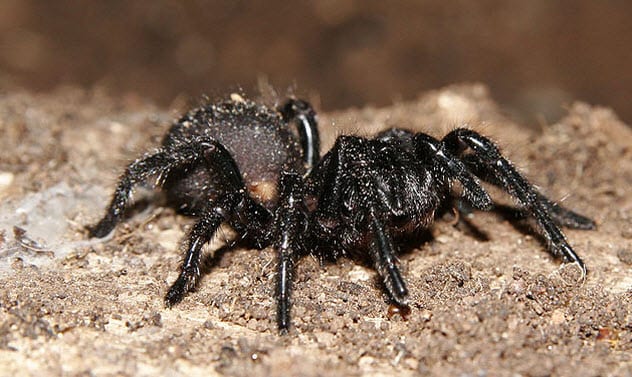 The funnel-web spider is the nastiest arachnid in the world. Although there are multiple species, the Sydney variant won’t be getting any invites to family gatherings from its cousins due to how much deadlier the Sydney spiders are.

Funnel-web spiders can grow to 1–5 centimeters (0.4–2.0 in) in length and can be a variety of colors from black to brown. The venom from the hairy spider’s massive fangs attacks a person’s nervous system,[7] causing foaming around the mouth and random muscle spasms. If left untreated, the spider’s bite can cause death.

If that isn’t bad enough, this all happens within two hours. So we all will probably be checking underneath our beds every night from now on. 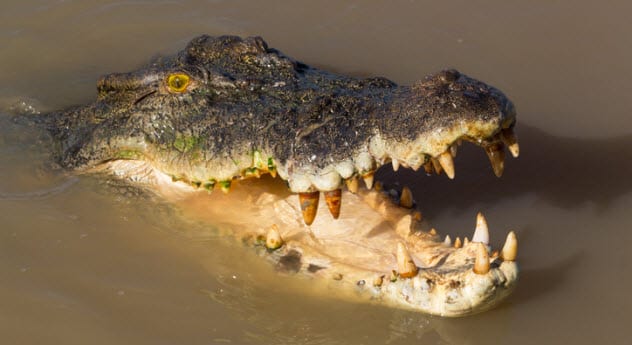 There is nothing subtle about the killing prowess of the saltwater crocodile (aka saltie). With over 100,000 crocodiles skulking throughout Australia’s saltwater rivers, the number of salties is continuing to increase, which is a bit scary.

Salties can grow to around 7 meters (23 ft) long and can weigh up to 1,000 kilograms (2,200 lb), a lot more than any of us are looking to deal with when we go for a late-night swim. With 68 large teeth, these animals trap people in their jaws and then complete what is known as a “death roll.”[8] This spin maneuver is used to drag down the prey while tearing a hole in it.

One-third of crocodile attacks have resulted in death in Australia since the species became protected in 1971. 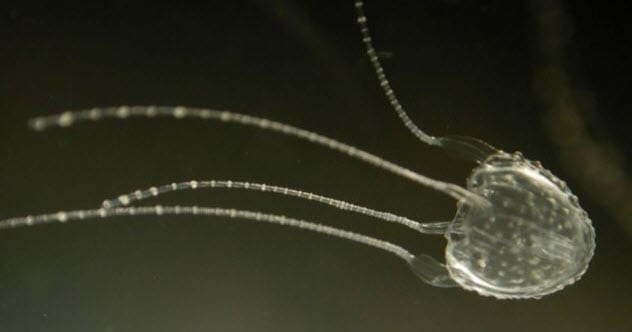 When people think of the word “deadly,” their first thought doesn’t jump straight to something that is usually depicted as just relaxing in the water doing its own thing. But if you come into contact with an Irukandji jellyfish, you’re going to regret it.

The Irukandji jellyfish, which is named after the indigenous people of that area of Australia, has stingers that release a venom which causes the Irukandji syndrome.[9] This syndrome causes anxiety, nausea, vomiting, pain in all limbs, and breathing problems. It also interrupts the electrical impulses that are sent through your heart.

All of this occurs within 20–40 minutes of being stung, so there isn’t much time to react. The only thing saving people from this venom, which is 100 times deadlier than that of a cobra, is that the Irukandji jellyfish is about the size of a human fingernail. 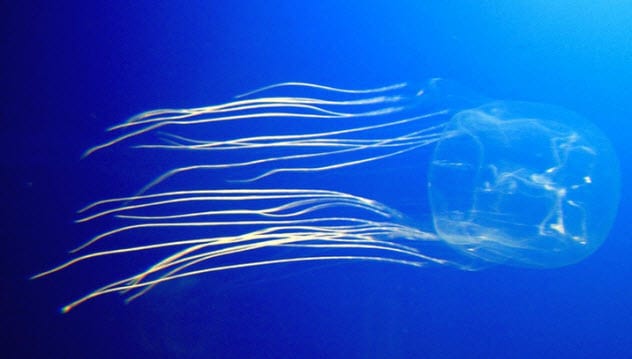 Chironex fleckeri, a box jellyfish also known as a sea wasp, is present throughout the coastal waters of Australia. This animal’s stingers discharge venom with immense power when it pierces a prey’s skin. The sting may instantly lead to symptoms such as hypotension, pain, necrosis, cardiovascular collapse, and finally, cardiac arrest.

Although this sounds like the Irukandji jellyfish, the smallest type of box jellyfish, the Chironex fleckeri is much different. It can grow to the size of a basketball,[10] which means that this jellyfish can push even more venom into the nervous system of its prey.

Chironex fleckeri is deadlier than some of its cousins because there is almost no time to treat the symptoms after someone is stung. Victims can die in minutes. Many people die at the hospital while being treated or even in the ambulance.

Nick is a newly graduated Modern History major who loves to learn new things and share them!