Everyone knows or at least has heard of Game of Thrones by now. We all have our favorite characters and stories, some of which seem so real and others so far-fetched that there is no way they could be true.

But guess what? A lot of them are true.

Are you that one person who says, “What is Game of Thrones?” Then we encourage you to break out your inner child and watch this show full of fairy-tale princes and princesses and all the happy endings that come with it. 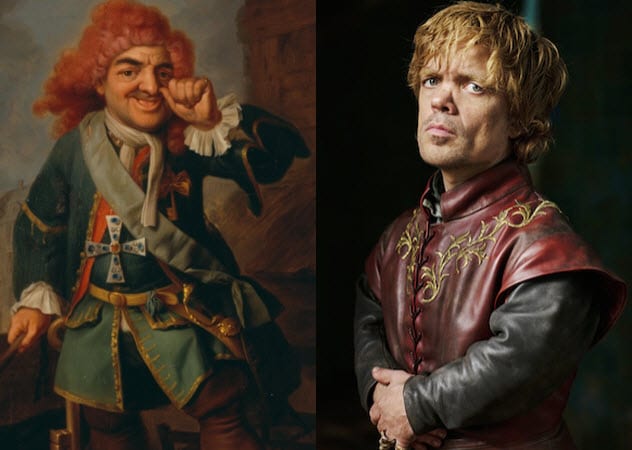 Everyone’s favorite Game of Thrones (GoT) character, Tyrion Lannister, has the healthiest dose of wit in the show, matched only by his love of wine. “I drink and I know things. That’s what I do,” said Tyrion, giving the most succinct description of himself.

The real-life Tyrion was much more fortunate to be born in a time of peace. Instead of fighting enemies of the king, he entertained the king as a court jester of Heidelberg. While this may not seem much like Tyrion, Perkeo was given another court job right up Tyrion’s alley. Perkeo was made master of the Tun, essentially putting him in charge of all the wine.

This was Perkeo’s dream job as he was said to drink nothing but wine, except for a single glass of water that supposedly killed him. Aside from anecdotal stories that sound like Tyrion fan fiction, Perkeo also indirectly shared a namesake[1] with Tyrion: The part of Italy from which Perkeo came was South Tyrol. 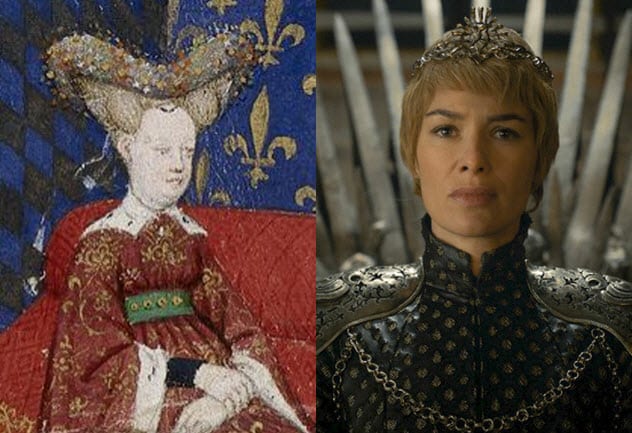 Queen Isabeau and Cersei Lannister shared many things. Both became queens regent when their husbands were unable to rule. Neither was all that well-liked by the people they governed, and most of all, these women had extramarital relationships.

Everyone knows how lovable Cersei Lannister[2] is in GoT . . . well, at least to one man, her loving brother Jaime Lannister. Some might say their love goes way too far, and let’s be honest, it does.

While this was a well-kept secret until the events in GoT kicked off, the real-life Queen Isabeau was not able to keep her actions hidden so well. In fact, she had a reputation for promiscuity, primarily with her brother-in-law. Maybe it wasn’t quite the incestuous problem the Lannisters had. But as we shall see, it led to a similar problem for Isabeau and Louis d’Orleans. 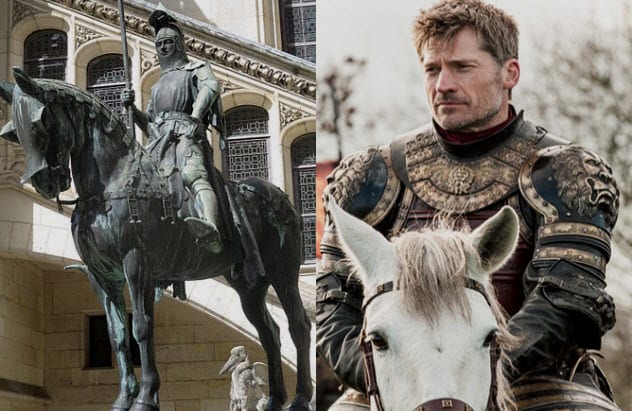 Louis d’Orleans has his own contribution to GoT‘s real-life history. Not only did he have a propensity for sleeping with the queen, he also had his hand cut off. Although he wasn’t the twin brother of the queen, their relationship was still scandalous.

It was even used as a reason for someone outside the royal family to try to take the throne. Charles VII was rumored to be the love child of d’Orleans and Isabeau and not a true heir of Charles VI. This would disqualify Charles VII from taking the throne.[3]

7 Sigurd The Mighty And Khal Drogo 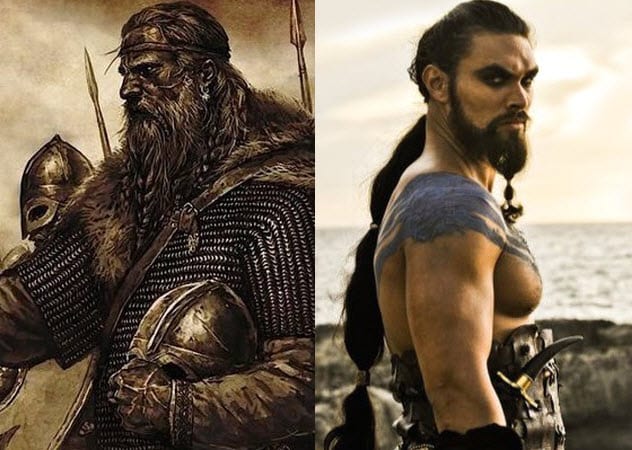 There is a lot to love about Khal Drogo—manly to a fault, certified badass on the battlefield, lover of horses, and that awesome hair. He leads a warrior people, and that same awesome hair means that he’s never lost a battle.

It could be argued that Drogo’s real-life counterpart is Genghis Khan or even Miyamoto Musashi, who literally won his first duel against a fully trained, fully grown, fully armed soldier while just a boy of 12 who was armed with a stick. But the defining feature of the late Drogo is his death.

In case you haven’t seen GoT, the great and mighty Drogo dies of a boo-boo. A small nick from a man Drogo kills gets infected. Enter Sigurd the Mighty, the unfortunate mirror of this odd death. Although Drogo’s infection was from a small chest scrape, Sigurd the Mighty may have had a slightly odder death.

After defeating his enemy in battle and chopping off his head, Sigurd decided to take the trophy home.[4] Saddled up in his horse, Sigurd scraped his leg on the dead man’s tooth and it was all over. The infection festered and killed the mighty Kha . . . uh, Sigurd.

6 Joan Of Arc And Brienne Of Tarth 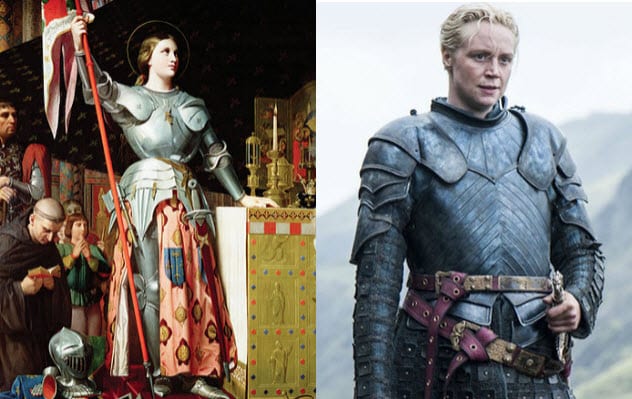 At first glance, it’s fairly easy to draw comparisons between Joan of Arc and Brienne of Tarth. Physically, the only thing strikingly different between the two is size. Although Brienne stands quite tall and Joan of Arc was estimated to be only 157 centimeters (5’2″), they do don similar attire.

Joan of Arc was known to wear men’s clothing and armor. She also cut her hair short and had the similar distaste for drunkenness, womanizing, and swearing that Brienne displays. Either by choice or circumstance, both women are also virgins, which earned both the nickname of “The Maid.”[5]

Now that the High Sparrow has come to an end, though, it seems unlikely that Brienne will meet with the same religiously inspired end as Joan. 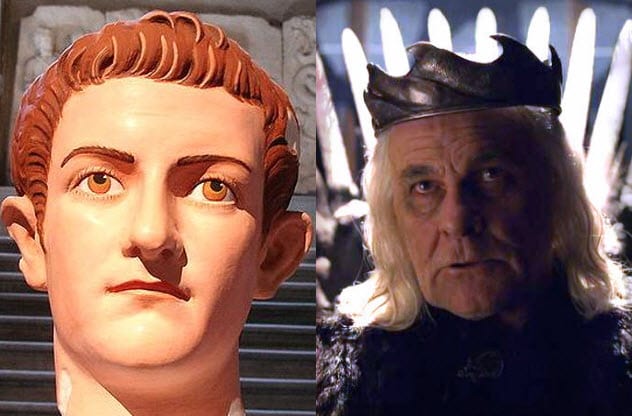 The careers of these two men mirrored each other very closely. First, both men took the kingship by right of their bloodline and were seen as relatively good at the beginning. For each, the title of “The Mad King” was earned.

The transformation in Caligula was sudden and sadly dramatic. He fell ill with a high-grade fever that many thought would take his life. It was then that he became, as one historian put it, “insane.” Among other things, Caligula ordered the deaths of people just for the fun of it. He also slept with other men’s wives and bragged about it to show his power and possibly to provoke a response so that he could kill the wronged husbands.

Like all the Targaryens, Caligula had a penchant for incest (and all manner of sexual depravity). In the end, both men were so much trouble that they just had to die. Each met his end on the wrong end of a blade[6] handled by his own guardsman. 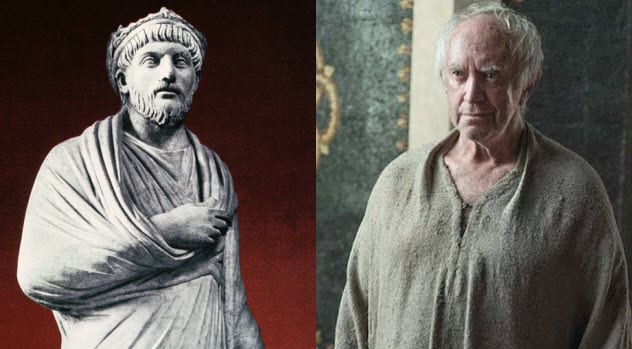 Almost everyone knows the High Sparrow. For a while, we marveled at how he was able to outmaneuver some of the most calculating characters in GoT. He fought back against the establishment with a grassroots movement from the people but was obviously in a position of obtained power. He also sought to restore the faith in the “Seven” in response to people’s lack of belief and the Lord of Light.

Emperor Julian was much more lax with punishments as he allowed a certain level of religious freedom. He did, however, join several different sects and seek to restore the old Roman gods to the seat of state power.

Julian gained favor with his people for the actions he took to restore the old gods. Well over half the empire’s people were still pagans even though the emperors no longer were. Like the High Sparrow, Julian probably changed the old religion just a tad to suit his needs and make it the driving force of his nation.

The Faith and the State should work as one is echoed in both sentiments. While “The Seven” does mirror the church of the Middle Ages, the idea of leaving “the one true god” in GoT to restore a pantheon of deities[7] rings a little close to home.

3 Wei Zhongxian And Varys The Eunuch 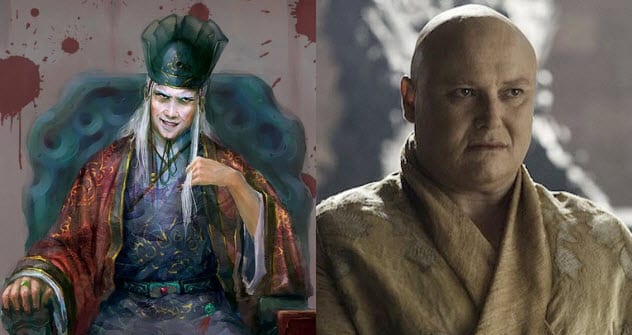 Varys the eunuch is one of the true manipulators in GoT and one of the characters who is not in a struggle to rule directly. He is able to achieve immense amounts of power via connections and extensive spy networks.

For all his accomplishments, though, he is still known to most in the GoT universe as “the eunuch.” It’s a defining feature for him, and despite the extent of his power, he pales in comparison to Wei Zhongxian, his real-life counterpart.

The backstories of Wei and Varys have a lot in common. Both were born poor and became eunuchs for monetary reasons. Afterward, each one worked in the palace and gained significant clout[8] in the court. While their monetary reasons differ—Wei was indebted to gamblers and Varys was sold—both did the most with what was left.

Wei was able to coax a little more out of his situation by using his sway over a young emperor to become a de facto ruler. In addition, Wei was officially head of a secret police network that rivals what Varys managed to muster.

However, Varys’s fate was infinitely better. He was able to flee the palace he served after the king’s death. Unfortunately for Wei, his influence diminished after his emperor unexpectedly died an early death. Ultimately, Wei committed suicide.

2 The Janissaries And The Unsullied 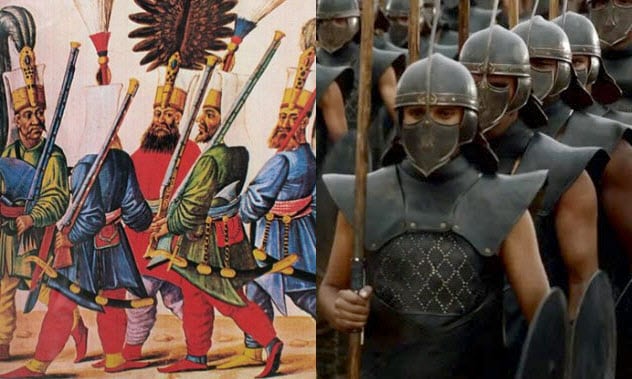 They are an elite fighting force, indomitable and strong, made up of conscripted young slaves. They are stripped of their past identities and given new ones by their new masters. They are also trained in several forms of hand-to-hand combat. A rarity for their time, they are a standing army numbering in the thousands, and they are evident to any fan of GoT as the Unsullied.

However, to a historian, a completely different fighting force would come to mind: the Ottoman Janissaries.

Although many people see a correlation between the shields and spears of the Unsullied and those of either a Roman legion or the Spartans, neither of these last two units incorporated a 100 percent conscription rate of slaves. The Janissaries, however, did.

To strip these fighters of their past lives, the Ottomans would demand tribute of young boys from Christian nations, raise them as Muslims, and have them swear allegiance and their lives to the sultan. The Janissaries were unquestioningly loyal[9] and became family to one another.

They were also one of the first armies to engage in the widespread use of firearms. Still, we would gamble that the Unsullied’s firepower (dragon) outmatched that of the Janissaries (muskets). 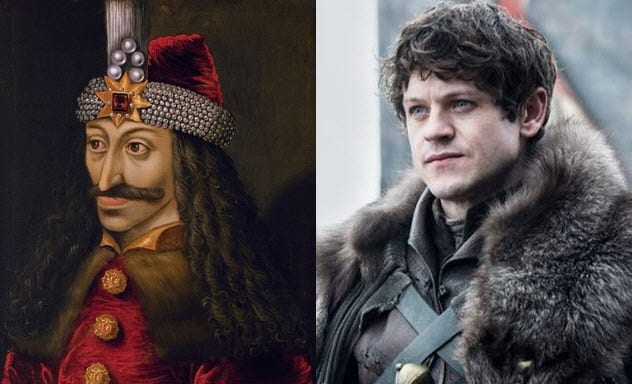 Vlad Dracula shares characteristics with many characters in GoT. He shares the birth by exiled nobles of Jon Snow, the family dragon title of the Targaryens, and the living with the father’s enemy as insurance of Theon Greyjoy. However, there is no one more akin to Dracula than Ramsay Bolton.

Sure, Dracula wasn’t illegitimate in the same way as Ramsay, but they did share a penchant for the horrifying torture of their enemies. Vlad Dracula’s contemporary name and another popular moniker was Vlad the Impaler. It doesn’t take a lot of imagination to guess why.

While Dracula impaled and possibly ate his victims to some extent, Ramsay flayed his targets. Impalement in the Middle Ages and flaying one’s enemy were fairly similar. These methods inflicted slow, agonizing deaths and were very much mental warfare tactics.

A mostly unknown similarity is their battlefield tactics.[10] At times in either man’s campaign, each was faced with an enormous army marching straight for him that would easily lead to defeat in a head-to-head battle. Instead, both men led night attacks on their enemies’ camp with resounding success.

While Ramsay’s attack effectively cut the supply line of the Baratheon march, Vlad’s assault struck fear and confusion into the enemy. Donning Ottoman garb, Vlad and his men sacked a small portion of the Ottoman camp. When the sleeping men woke up, they commenced to maul each other with a flurry of swords, pikes, and hammers. Convinced that they were fighting the enemy in Ottoman clothes, they battled their own men until it was nearly morning.

John loves just about anything odd and offbeat and will likely root for the “bad guys” in most stories and movies.