Although many execution methods, such as burning to death, are centuries old, capital punishments were not well-documented throughout most of history. While the famous “eye for an eye” tenet of the Code of Hammurabi was explicit in its punishments, there are no records of who actually received those punishments. Each of these individuals is the first recorded execution of his or her kind, whether it was the brutal punishment received or the age, gender, or location. 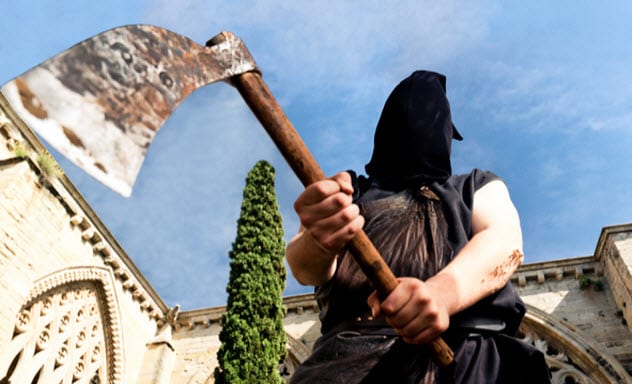 Priscillian was a priest who practiced extreme self-discipline and abstention. He was also a Manichaean, which was against the doctrine of the Christian church. Manichaeism is a religion founded by Mani, a Persian man who viewed himself as a prophet right up there with Buddha and Jesus. The religion states that life on Earth is the worst and true knowledge of the soul is the only way to save it.

Needless to say, Emperor Maximus of the Roman Empire cried heresy and Priscillian was beheaded. Not only was he the first person recorded to receive this punishment, but it was also the first time that the government and church got together to accuse someone of heresy.[1] This practice continued for a long time and was used whenever religious or political rebels needed to be dealt with. 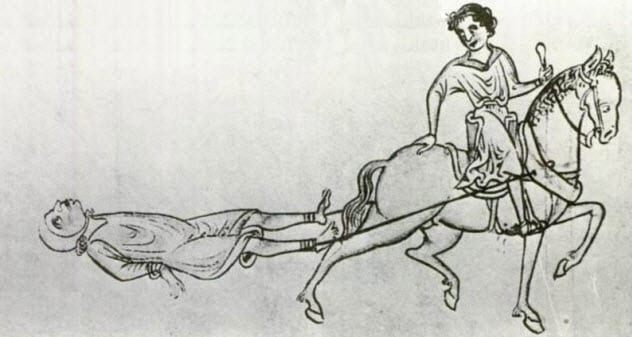 Accused pirate William Maurice has the unfortunate title of being the first recorded person to be hanged, drawn, and quartered. In fact, the punishment was specifically designed for him.

Remember that scene in Braveheart where that other William (Wallace) was on the table? There was screaming, and we knew that some kind of horrific torture was happening, so bad that they couldn’t even show it on-screen. Yeah, he was being disemboweled and castrated. And that’s not even the worst of it. (Well, maybe it is—or when they burn the entrails and genitals in front of the shocked but still alive person.)

To be hanged, drawn, and quartered is a lengthy process of torture that the townspeople really seemed to enjoy, so much so that many men after Maurice received the same punishment.

The “drawn” part actually comes first. Poor Maurice was dragged by horses to the execution table, where the disemboweling happened. Then he was beheaded.[2] His body was tied to four horses that were headed in opposing directions (the quartering part), and the body parts were then displayed around the town.

8 Unnamed Men In The Netherlands
1321 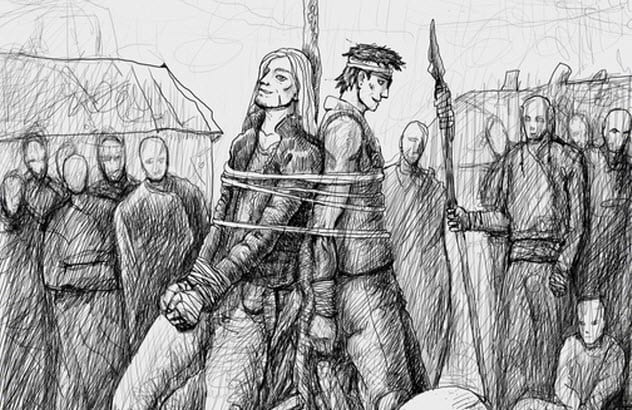 Not much is known about this case, only that the unnamed men were accused of sodomy and received the punishment of death by fire. The two men lived in Egmont near Amsterdam and were the first recorded to be punished for these acts in the northern Netherlands.[3] 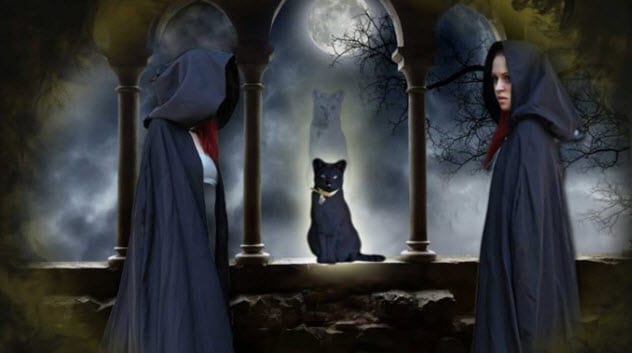 In Chelmsford, England, Agnes Waterhouse was an accused witch hanged for the death of her husband, her neighbor William Fynne, and some assorted livestock. Agnes’s daughter, Joan, and friend Elizabeth Francis were also on trial, but only Agnes was found guilty.

Apparently, Elizabeth turned Agnes onto witchcraft when she gave Agnes her cat, named Satan. The cat showed Agnes his power by killing a pig and teaching her the finer points of sorcery. Agnes was able to turn the authoritative cat into a toad, but that didn’t stop her use of witchcraft.

Blood did not seem to be thicker than water in the Waterhouse family because accused daughter, Joan, testified against her mom to save herself from the same fate.[4] 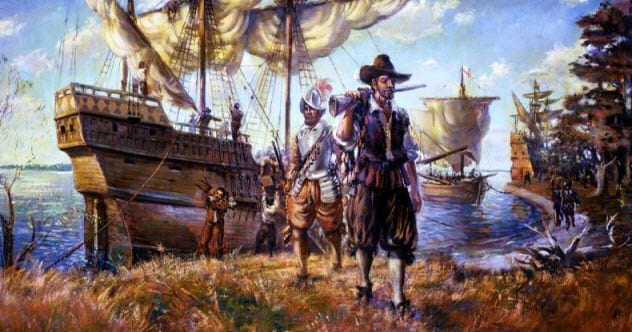 Captain George Kendall was one of the members of the first council in the Jamestown colony in Virginia. The councilmen had a difficult time getting along before they even arrived in the New World and imprisoned John Smith aboard the Susan Constant with the intention of hanging him in the near future.

Smith survived and was one of the council members who tried and convicted Kendall. His original crime is unknown but was bad enough to get him kicked off the council and imprisoned aboard the ship Discovery. The ship was used because no prisons had yet been built in Jamestown.

A crafty blacksmith who was to be hanged for threatening to beat up the president of the council avoided the gallows by accusing Kendall of being a spy for the Spanish. Kendall was the first Virginia colonist to be sentenced to death and killed by firing squad.[5] 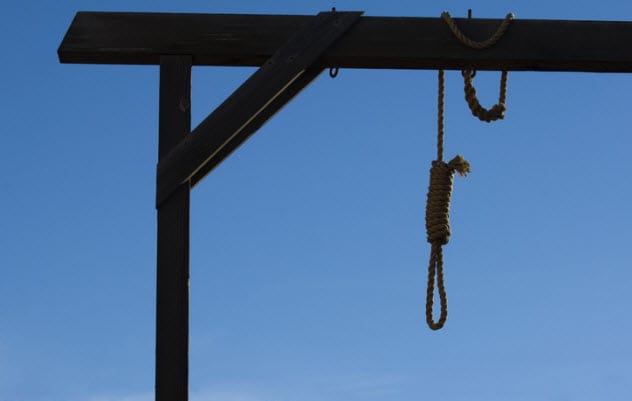 Less than 15 years after the trial and execution of George Kendall, Jane Champion, another Virginia resident, was accused of murder and became the first woman in the American colonies to be executed. It is not known whom she murdered or why the murder was committed, but she was tried and found guilty. Her sentencing was death by hanging.[6] 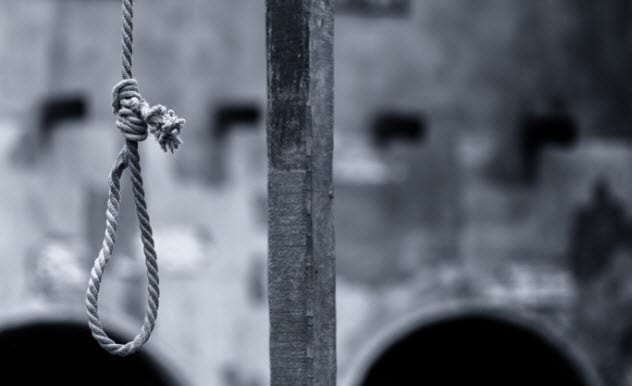 The English in 1708 were quite serious about hanging people for their crimes, no matter what the crime or the age of the person committing it. This lack of compassion, in addition to their issues with theft, led to the hanging of seven-year-old Michael Hammond and his 11-year-old sister, Ann.

King’s Lynn resident Michael is the youngest recorded person to be hanged for a felony offense, and his crime was reportedly stealing a loaf of bread. There’s no denying that stealing is wrong, but no one seemed to take into account during his trial or public hanging that the thief was only a young child.[7] 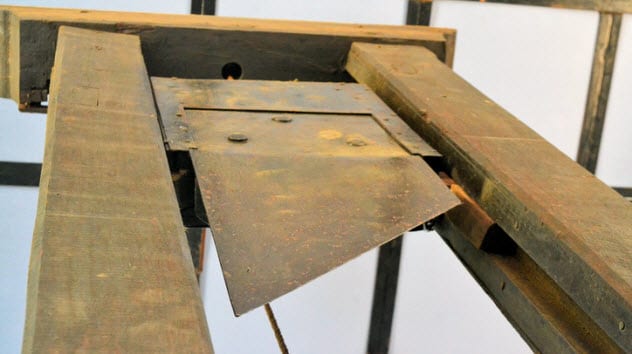 While hanging was still all the rage in England, Dr. Joseph-Ignace Guillotin was devising a more humane punishment for convicted felons in France. After testing out the invention, the guillotine, on various animals and human corpses, it was decided that the blade beheaded the test subjects cleanly enough that it was ready to use on a live person.

Convicted of robbery and murder, Nicolas Jacques Pelletier was the first person to die by the device. His head was chopped off cleanly and landed in the supplied wicker basket while the crowd jeered their disapproval at this new humanitarian method.

Although a good deal of the blood was immediately soaked up with sawdust, the guillotine lacked the brutal, slower death of its predecessor methods. Despite the onlookers’ general disapproval of the device, the guillotine was the execution method of choice in France until 1977.[8] 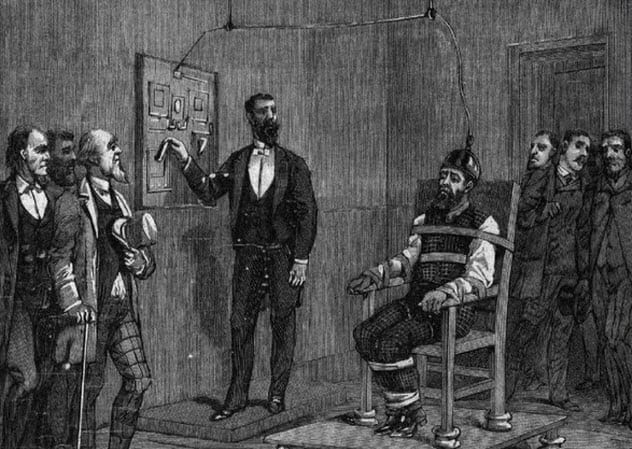 William Kemmler was serving time in Auburn Prison in New York for butchering his lover with an axe when he was chosen to be the first person to die by electrocution. Designed by the prison electrician, Edwin Davis, the electric chair delivered its current through electrodes positioned on the head and back of the felon.

When it was used on Kemmler, the shock lasted 17 seconds before failing. A second shock for approximately two minutes was required to kill Kemmler.[9] Despite the initial mishap, the execution was viewed as an overall success because it took less time than hanging. 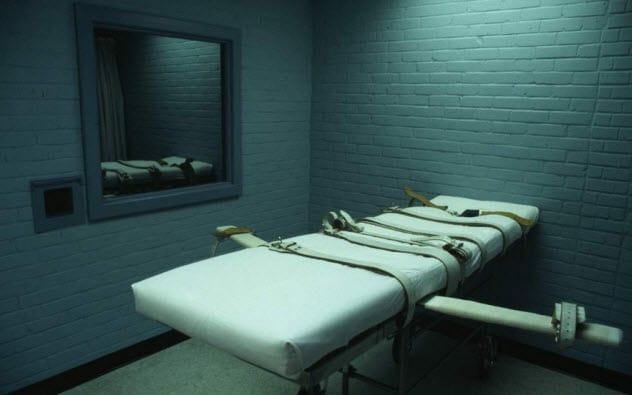 Charles Brooks Jr. and Woody Lourdes were imprisoned after stealing a car during a test drive and fatally shooting the mechanic riding with them in 1976. Lourdes was sentenced to 40 years in prison, while Brooks was the first person to die by lethal injection.

Neither man ever identified who actually shot mechanic David Gregory in the head, but it was Brooks who got the permanent sentence. Surrounded by 20 witnesses in a Texas prison at 12:09 AM on December 7, 1982, Charles Brooks Jr. was administered the barbiturate sodium thiopental. After reportedly moving and gasping, Brooks was pronounced dead at 12:16 AM.[10]

Catherine Jones is a high school teacher and adjunct college professor with a love for reading and writing.