Humanity has yet to be contacted by any life from beyond our planet. Ignoring Area 51 truthers and UFO sightings, we have received zero messages from any life—no ETs, no Ewoks, nothing.

Given the incredible advances in technology in the past 100 years, there is a good chance that aliens who became spacefaring civilizations even a few hundred years before us would be unimaginably more advanced than we are now.

We have thought of many different ways to transmit messages across the cosmos. So if super-advanced aliens wanted to communicate with us, here are some ways they could do it. This is what first comes to most people’s minds when they think of communicating with aliens. Receiving messages in this form is the subject of many books and movies, like Contact or Independence Day, and it is a good start.

After all, we’ve been playing around with radio waves for over a century, and we’ve become rather good at it. Plenty of serious scientists and organizations, like SETI, are investing their time in listening for alien communications in radio waves.

We have even had a possible detection in the late 1970s with the famous WOW! signal, a sudden radio emission from a nearby star cluster that still has no definitive explanation all these years later.[1]

However, there are a few fatal problems with this method. Radio waves thin out as you get farther from the source. So the messages we’ve been sending for the past century are basically indecipherable after a few dozen light-years.

We could overcome this with larger radio dishes, but many engineering problems come into play if we start to make truly massive dishes. Theoretically, a super-advanced civilization could make up for these problems by virtue of their technological might, but they would probably choose something cooler from the list below. While radio waves become crazy hard to decipher at cosmic distances, lasers could be a more reasonable way to communicate. The integrity of the signal is kept for much greater distances than radio waves, and it will look very distinct to us here on Earth.

You can target individual celestial bodies, so the message-sending process is nice and efficient, unlike radio waves which expand outward in a sphere. Sufficiently advanced civilizations could send messages like this to systems hundreds of light-years away. And the bright laser flash would be easily detected by us here on Earth.

The question is: What frequency of light should we use when transmitting the laser signal?

If the civilization is advanced enough, they could send massive gamma ray blasts into space. They will last the longest and could really stand out. Of course, that takes incredible amounts of energy. But we’re assuming the aliens have access to that.

A potentially more realistic scenario for current humans is to use infrared or microwave lasers because they simply require less energy. Heck, we’re already doing it.[2] 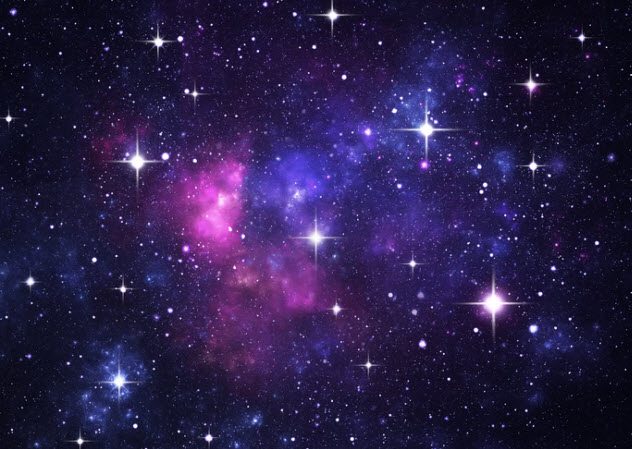 You’ve probably heard of the Kepler Space Telescope. It’s a NASA telescope that searches for planets around other stars by watching the dip in the star’s light as an exoplanet passes in front of the star.

But what if a slightly more advanced civilization than our own puts a gigantic rectangle into orbit around the star? Or a triangle? Or an oddly shaped 1,258-gon (1,258-sided geometric figure)? We would just have to figure out what this would look like in the data collected by the telescope, which is totally doable.[3]

The alien civilization doesn’t even have to be that advanced. In a few hundred years, we could very well be capable of such a feat. Just make the object incredibly thin, out of carbon fiber or something like that, and assemble it in parts in orbit.

These things would have to cover the area of a large planet to be detectable. But again, advanced aliens shouldn’t have difficulty putting something like this together.

Personally, I’m cool with aliens sending us some geometry problems. 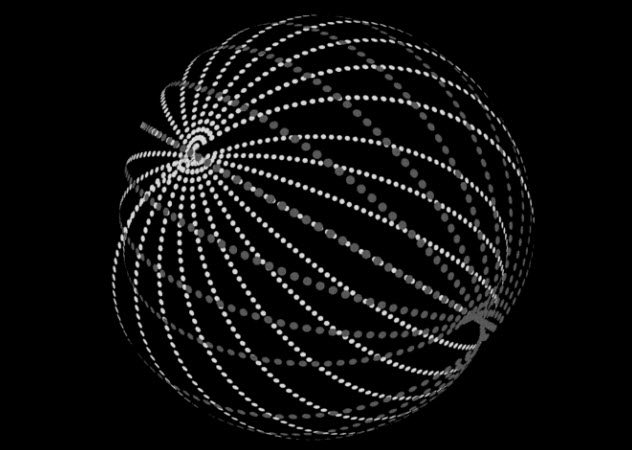 This is similar to the last entry except that the civilization is more advanced and the primary goal isn’t to contact us. Instead, the aim is to collect the entire energy output of a star.

Here’s the idea: Instead of just putting up big metal shapes into orbit, why not put up billions of large solar panels to collect a star’s energy?[4] It sounds crazy. But at the rate of our technological progression, humans could accomplish this in a few hundred or thousand years.

The alien civilization could alter the starlight to send us some kind of intelligent-looking message. This could even be easier to detect than the effects of a geometric shape because of the absolutely massive dips in starlight.

The aliens then could use the energy collected from the star to power massive versions of some other items on this list, like radio dishes. This is the point where the alien civilization starts to get frighteningly more advanced than we are. If this type of activity is detected, maybe it isn’t the best idea to send the aliens a message in response.

6 Playing With The Cosmos 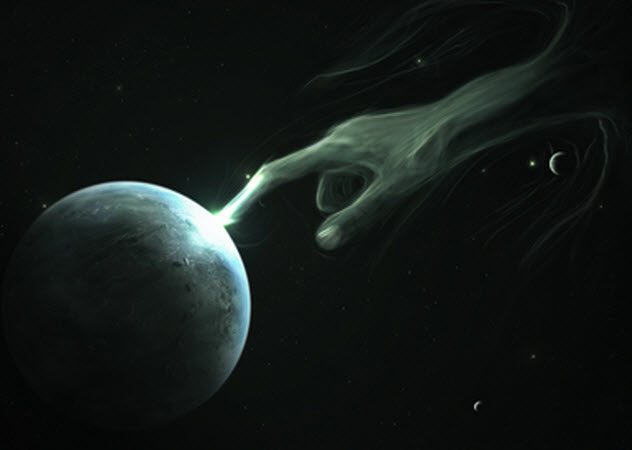 A civilization millions of years more advanced than us could very well be able to control the movements of celestial objects within their galaxy, right? So they could just mess with nearby stars and other celestial bodies to get our attention. Accelerate things to near the speed of light, then slow them down, then do it again and again and again. Eventually, someone has to notice.

Then you can rapidly change the star’s brightness or some other property of the body you’re moving to send us some kind of message—maybe some prime numbers or the digits of pi or something. The energy required to do this would be enormous, and the technology to do so we can only imagine in science fiction.[5]

Every night, astronomers peer into the universe looking for something out of the ordinary and this would be a great way to get our attention. Obviously, these kinds of abilities would seem basically godlike to us. Humanity has recently developed the ability to detect gravitational waves (rapid changes in the curvature of space-time). Back in 2015, the scientists at the Laser Interferometer Gravitational-Wave Observatory (LIGO) experiment announced that they had discovered ripples in the fabric of space and time, marking the first time that humans had discovered these waves.

So an advanced civilization could just play around with a few neutron stars or black holes in a way that sends a strange and clearly intelligent signal to our detectors. They can control the frequency and amplitude of these waves to embed some information and send us a message.

Obviously, this would involve incredible technological prowess.[6] The cool thing is that our sensors can detect these waves from billions of light-years away, so aliens who do this anywhere nearby in the universe will be detected.

These distortions in the reality of the universe are small, changing the distance between things by less than the diameter of a proton. But if aliens really wanted to get our attention, they could scale up these waves so that we could clearly get the message.

Or the aliens could make the waves so big that they conveniently kill all living things that would resist them (like humans) from harvesting the Earth for resources.

4 Bombard Us With High-Energy Particles Earth receives tons of radiation on a daily basis. But if aliens could increase that amount and then vary it to send us a message, we could detect it.[7]

Send a bunch of crazy high-energy cosmic rays, so much so that it increases our radiation exposure by a few percent and scientists would notice it. Alternate the amount of particles to encode a message.

Of course, this might not be the most eco-friendly option. But hey, super-advanced aliens probably don’t care about the biological integrity of a few billion ape descendants.

There is no known way to do this on a large scale. We also don’t know how to target it. In fact, this probably isn’t the smartest or most efficient way to go about communicating with extraterrestrials. But if they’re capable of such a feat, why not? If they’re advanced enough, they could totally do it. Erase large things in a way that would get our attention and then use another method to send an actual signal. They could send in swarms of nanobots to disassemble things into elementary particles or use black holes as a nice little way to delete things from reality. Fun stuff, huh?

A more reasonable civilization may alter the rate of decay of some cosmological object, perhaps making a red dwarf star (a type of star that can burn for trillions of years) burn out in a comparatively short time. Scientists have never observed the death of a red dwarf star, simply because the universe has only existed for a tiny fraction of such a star’s expected life.[8] We don’t actually know if wormholes are physically possible. And if they turn out to be possible, we don’t know of any way, natural or otherwise, to create one.

At this point, things are just getting crazy. Maybe aliens could insert a wormhole somewhere close by, Interstellar style, and use that to send in physical things that relay their radio transmission or something like that.[9]

Perhaps they could use the wormhole to send in a fleet of their spacecraft to make contact. Or maybe they could send in those disassemblers from the previous entry, erase us from the universe, and collect all the materials from former Earth.

1 Change The Laws Of Physics 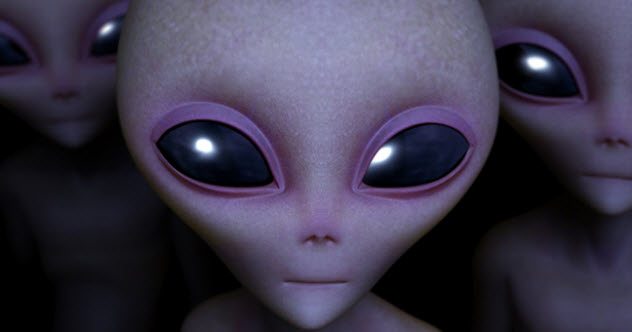 When we look out into the cosmos, we assume that the same laws of physics apply everywhere and that they are permanent and unchangeable. We think that this is true, but what if this isn’t the case?[10]

Incredibly advanced aliens could manipulate physics to make some of the other methods above easier and more doable. Or maybe they could signal their presence or send us a message by altering things, like the charge of the electron.

When you control the laws of physics, you control basically everything. Our puny ape brains can barely comprehend the parts of the universe we do understand, so this kind of technology would probably make our heads explode.

Come to think of it, they could just erase large things from existence in a different way. Instead of destroying us from the universe in a flaming ball, they could simply remove our ability to exist. After all, they control the laws of physics!

Read about other bizarre ways that aliens may—or maybe already did—contact us on 10 People Who Claimed To Have Sexual Encounters With Aliens and 10 Bizarre Ways Scientists Believe Aliens Will Contact Us.