The human body is a pretty amazing thing. The average adult human has 640 muscles, 206 bones, 12 organs, and so much more that all grows from a tiny, microscopic blob inside someone else. But while the human body can grow some incredible things, including other humans, doctors occasionally find some very unexpected things growing in there as well. Below are just ten examples of some of the terrifying and unexpected things found growing inside of humans. 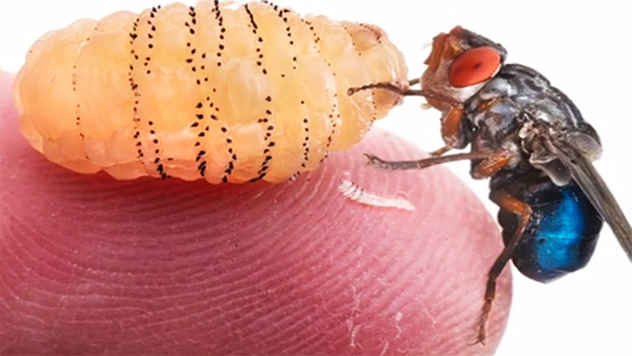 There are a lot of different potential causes to a swollen eye: allergies, infection, getting a little too fresh with the wrong person. While a swollen eye is not the most worrying of symptoms, it can be quite annoying and inconvenient. So when a 17-year-old Peruvian boy noticed his eye had been slowly swelling for a few weeks, he went to the doctor to find out why.

The cause of the boy’s swelling turned out to be a 3 cm (1.2 inch) botfly larva that was growing inside his eye.[1] Dermatobia hominis, or the human botfly, is implanted into humans by infected mosquitos, where it lives and grows for eight weeks before emerging. They are usually harmless but can occur essentially anywhere on the body, as it is our body heat that insulates them. In the case of the Peruvian boy, doctors were able to remove the whole larva by using basil leaves to tempt it to poke its head out, before seizing it with a pair of tweezers. The boy was awake for this uncomfortable procedure, which you can watch here. 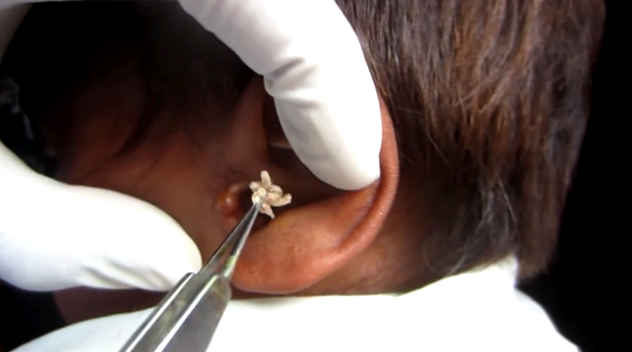 As horrifying as the thought of a maggot wriggling around inside your body is, it pales in comparison to the thought of hundreds of maggots wriggling around inside you. That is the situation a man from India found himself in when he went to visit Dr. Vikram Yadav. The man, who remains unnamed, visited Dr. Yadav complaining of a buzzing sound in his ear. When Yadav looked inside, he saw a throbbing white mass, which he identified as a maggot infestation.[2]

The maggots were most likely laid there by a fly when the patient was sleeping. To get them out, Dr. Yadav first suffocated them, which caused them to make for the exit. When they got near enough, he removed them one by one, and used anti-parasitic medication to prevent any more eggs from hatching. But if you think this man was an unfortunate, rare case, think again. Maggots in the ear are not uncommon in poor, elderly, or infirm people, and the situation is common enough to even have its own medical term: aural myiasis.

8Something on Your Mind 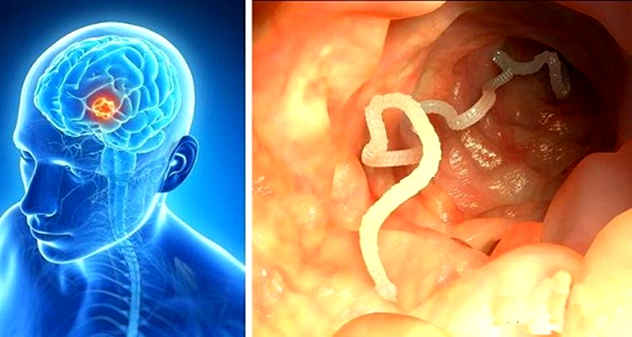 Headaches can be caused by any number of benign things, from drinking too much caffeine to staring at a computer screen for too long. But as you have probably already guessed, there was a much more sinister cause for the 50-year-old Chinese man in this case.

The unnamed man checked himself into a hospital in the UK after experiencing incessant headaches. When the usual tests turned up nothing, he was given an MRI. Although doctors did notice an abnormality, they could not find anything until a full four years later, at which point they informed the man that he had a tapeworm swimming around his brain the whole time.[3]

The tapeworm, eventually identified as Spirometra erinaceieuropaei, is a rare type of tapeworm from Asia that is seldom found in humans. As it moved through the man’s brain, it triggered different elements of his mind, leading to symptoms that included not only the headaches, but also seizures, strange smells, and random flashbacks. It was eventually removed surgically, and the man’s symptoms disappeared. 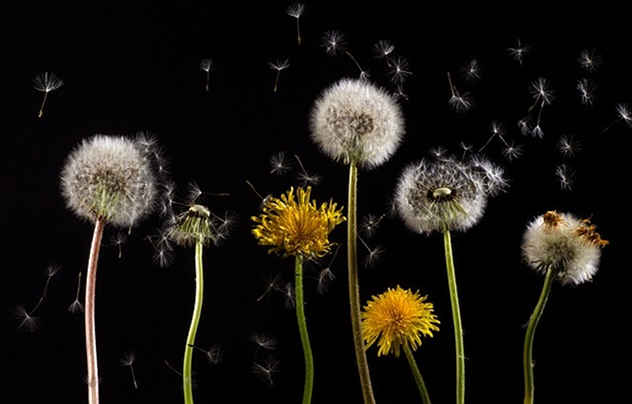 Children grow a lot in their first few years of life, but doctors in China were shocked to find out just what one 16-month-old patient was growing. The girl, named only as Ranran, was brought to a Beijing hospital after her parents noticed that she was continually crying and scratching at her ear. Her mother had seen an object inside the ear canal but was unable to remove it herself.

After examining the strange mass in the little girl’s ear, doctors realized that she had a fully-grown dandelion inside her.[4] Her parents said that a seed had fallen in there about four months ago, but they did not take any notice until she began crying. Doctors theorized that the warm, humid environment made it possible for the plant to grow, and they were able to safely remove it before it caused any permanent damage.

6Did You Try Nuking It? 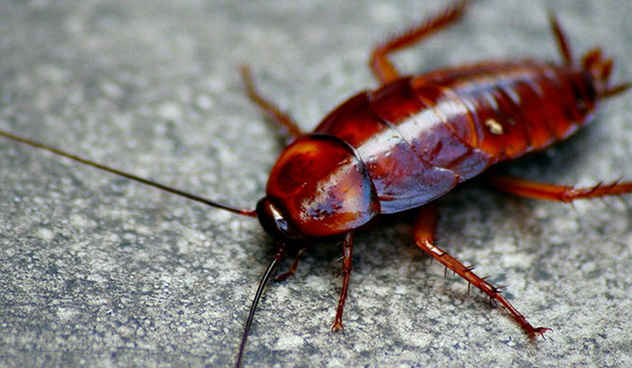 One morning in 2014, Hendrik Helmer woke up to a stabbing pain in his ear. Since he was from Australia, Helmer naturally assumed that a spider had crawled in there while he was asleep. With that in mind, he did what any Australian would do, and tried to ignore it. When the pain not only failed to subside but got worse over the next few hours, he decided to take action.

Initially, he tried to drown the beast with water. When that failed, he decided a vacuum might be able to suck it out, which just made the creature squirm around more inside him. With all his reasonable options exhausted, Helmer decided to try a last-ditch attempt and go to the hospital.

When the doctor examined Helmer, she could see that there was something alive inside, but could not quite make out what. In a short procedure, she poured olive oil into the man’s ear, which usually drives animals out of the ear canal. In this case, the creature appears to have drowned, allowing the doctor to remove it, and finally reveal that a 2 cm (0.79 inch) cockroach was the culprit behind all of Helmer’s pain.[5] Helmer was relatively unfazed by his ordeal, although several of his friends began sleeping with earphones. 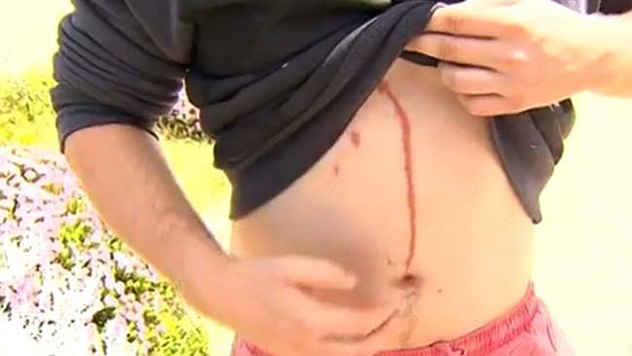 Getting your appendix out is one of the most common surgeries in the world. Being so ubiquitous means the procedure has advanced significantly over the past few years, reaching a stage where only a tiny scar can be seen afterward. Unfortunately, for one Australian tourist traveling through Indonesia, this was enough of an opening for a spider to burrow inside him.

While in Bali, Dylan Maxwell got bitten by a bug. While this did not seem like a big deal at first, Maxwell visited a medical center after a red line slowly grew from his belly button, going all the way up his torso and above his nipples. They gave him antihistamines for an insect bite and sent him on his way. When he returned, they ran further tests and realized that he had a spider inside him.[6] The spider was not removed there, however, and Maxwell had to fly back to Australia with his extra passenger before it could be extracted. 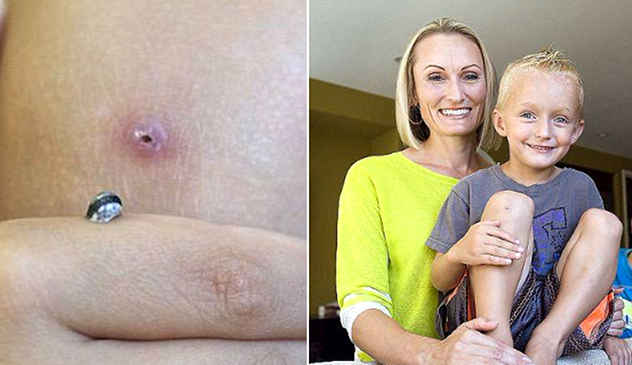 While many people find the thought of popping spots disgusting, it is a guilty pleasure for many more. And unless you are Dr. Pimple, it is probably your own spots you are popping. But after antibiotics failed to rid Rachael Franklin’s son, Paul, of a spot on his knee, Rachael decided to pop it herself, against the advice of doctors. At first, she thought the small, black object that popped out was a rock, only to then realize it was a sea snail.

A few weeks prior to this, Paul and his family were enjoying a day out at the beach. At one point, Paul fell and scraped his knee, but his parents thought nothing of it. It is assumed that a snail egg got stuck under his band-aid, and continued to grow inside him. If you are wondering how it survived, snails are carnivores with tongues covered in thousands of tiny teeth that they use to rip off edible shreds of food.

Paul, who was only four years old at the time, simply said he thought the situation was “kind of crazy,” and kept the snail as a pet, naming it Turbo.[7] 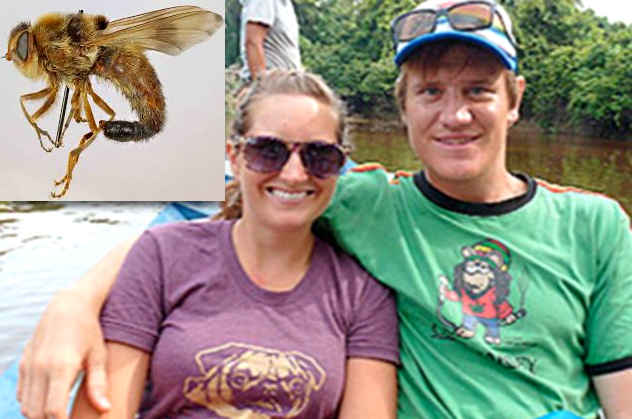 In 2013, Australian couple Bryan Williams & Ally Vagg were on vacation in Bolivia. Like many other tourists, they were bitten mercilessly by mosquitos during their trip. Thinking the red marks dotted all over their bodies were nothing more than bitemarks, they carried on for a few days before they realized the marks were moving. Then, they noticed little heads popping out of the wounds.

The couple sought medical attention, but said that the doctors involved were “useless.” Eventually, one of Bryan’s friends pulled the first, 2.5 cm (1 inch) botfly larva out of a wound. The useless doctors did nothing, leaving the couple to remove seven of the larva themselves, after taping the wounds to smother them.[8] But with potentially 50 larvae in each wound, the couple had to see a specialist, as well as spend over a month in Bolivia to ensure that they would not bring any of the larvae back to Australia with them. 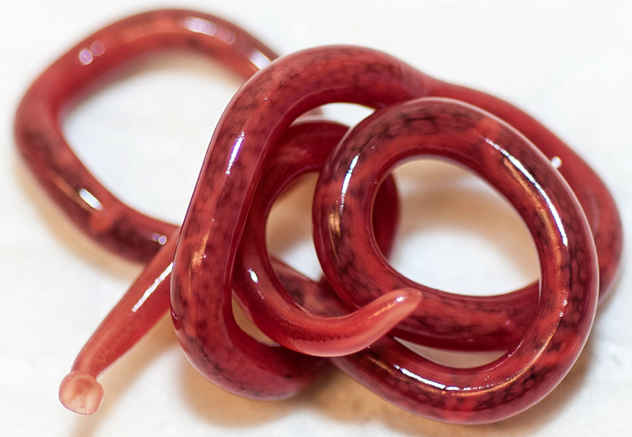 Hana Foldynova was 76 years old when she was admitted to hospital in her native Czechia (formerly the Czech Republic) after her GP found blood in her urine sample. When surgeons began operating to remove what they assumed was a blood clot, they were horrified to find an almost 10 cm (4 inch) tapeworm living in one of her kidneys, as well as another in her bladder.[9]

The parasite was identified as a giant kidney worm, and most likely made it into her system from undercooked fish. While the worm can live in its host for up to five years, it will inevitably kill you if left untreated. Unfortunately in this case, given the patient’s age, Hana was unable to fully recover after the surgery and passed away a short time later.

1You’ve Got Something in Your Teeth 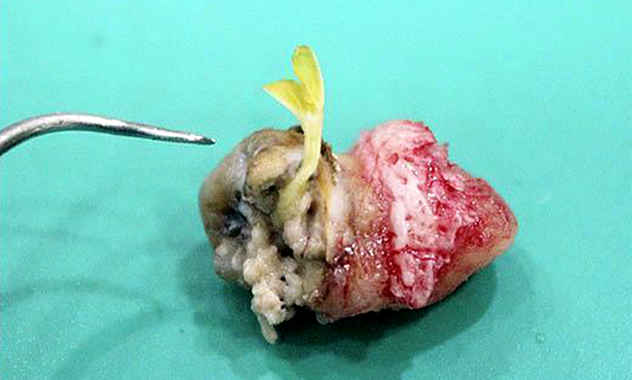 As horrifying as these stories are, in most cases, there is not a whole lot you can do to prevent something from taking up residence inside you. Sure you could use more insect repellent, or watch what you eat, but unless you are going to live a paranoid life in a bubble, you just have to run the risk of becoming a tiny creature’s house. However, for the 36-year-old Taiwanese man in this case, he really should have brushed his teeth.

After experiencing a toothache like no other, the unnamed man went to see a dentist. The tooth in question was a decayed molar, with the molar below it missing as well. This double-whammy of poor dental care gave enough room for the guava seed stuck in his tooth to germinate and sprout, leading to the man’s pain.[10] After removing the tooth, the dentist acted professionally and assured the man that everything would be fine. Just kidding. He called in all the other staff and patients waiting outside to come see for themselves, causing the patient to flee in humiliation.

The only thing growing inside Simon is his contempt for days that are both rainy and hot. You can follow him on Twitter @simongireland