There have been many incidents and accidents ever since the Wright brothers made the first powered flight in 1903. But some of these events are so scary and unusual that they deserve notable mentions. 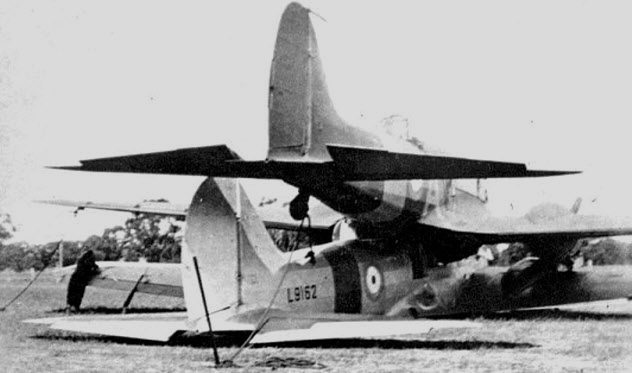 This left only Leading Aircraftman Leonard Fuller, the pilot of the upper plane, aboard. Both airplanes did not enter a steep dive and crash as expected. Instead, they remained airborne and locked together, with one above the other.

So he flew both airplanes 8 kilometers (5 mi) before landing in Brocklesby. The lower airplane was written off after the landing, but the upper airplane was repaired and returned to service.[1] 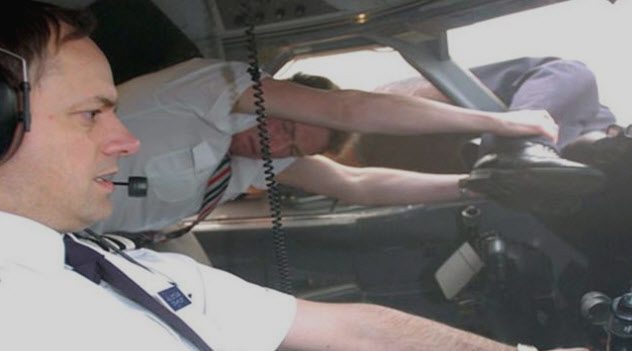 On June 10, 1990, British Airways Flight 5390 was flying from Birmingham, England, to Malaga, Spain, when a cockpit windshield blew out at an altitude of more than 5,200 meters (17,000 ft). The sudden loss of pressure sucked Captain Timothy Lancaster out of his seat belt. He was saved from being blown out of the airplane by the quick action of flight attendant Nigel Ogden, who held onto him by the waist.

At the same time, Lancaster’s legs hit the controls and disconnected the autopilot, sending the airplane into a dive. The first officer recovered the airplane from the dive, but more than half of Lancaster’s body remained sprawled over the top of the airplane. The change in pressure had also started dragging Ogden out of the airplane, and he was then saved by another flight attendant who held onto his belt.

By now, Lancaster’s face was furiously banging on the side of the cockpit windshield and the crew thought he was dead. Someone even suggested that they release him. But they decided to hold onto him over fears that he might be sucked into the engine and cause more damage.[2]

The airplane made an emergency landing at Southampton, England, where Lancaster was found to be alive. He was treated for fractures and frostbite. There were no other major casualties. 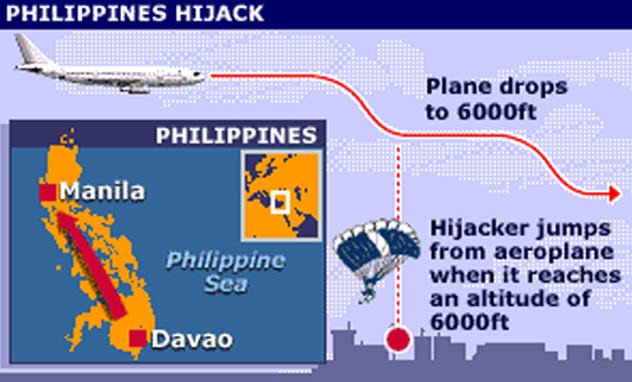 On May 25, 2000, Philippine Airlines Flight 812 with 278 passengers and 13 crew members was flying from Davao City to Manila when it was hijacked D.B. Cooper–style by a man armed with a gun and a hand grenade. The man, who was later identified as Augusto Lakandula, ordered the pilots to return to Davao. After they told him that they did not have enough fuel, he instructed them to reduce their altitude so that he could jump out.

Before jumping, he robbed the passengers of their money and asked the crew to teach him how to use his homemade parachute. One of the pilots realized that his low-quality parachute had no rip cord and quickly made one for the hijacker with the curtain sash. The pilots decompressed the cabin and opened a rear door before one of the crew pushed Lakandula out. He left behind his gun and one shoe.[3]

Lakandula did not survive the jump. His remains were found in the forest even though the money he stole was missing. It was suggested that his poor-quality parachute initially deployed but later failed, sending him plummeting to Earth. 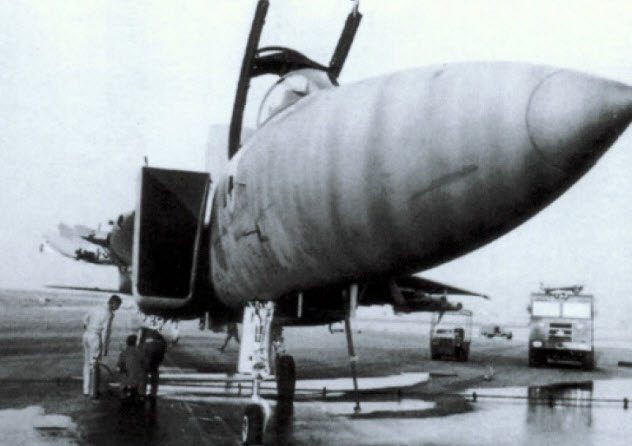 In 1983, the Israeli Air Force was executing mock aerial combat drills over the skies of the Negev desert when an F-15 Eagle collided in midair with an A-4 Skyhawk. The collision was followed by an explosion and ejection by the Skyhawk pilot.

Meanwhile, the F-15 went into a spiral and headed straight toward the ground. Trainee pilot Zivi Nedivi had ignored orders to eject and attempted to regain control, all the while oblivious to the fact that his jet had lost its right wing.

Nedivi managed to land the jet at a nearby air base and only realized the extent of the damage when he turned around to shake his instructor’s hand. The incident was so unbelievable that even McDonnell Douglas, the makers of the F-15, initially claimed that it was impossible to fly the aircraft with only one wing. The F-15 was given a new wing and returned to service two months later.[4] 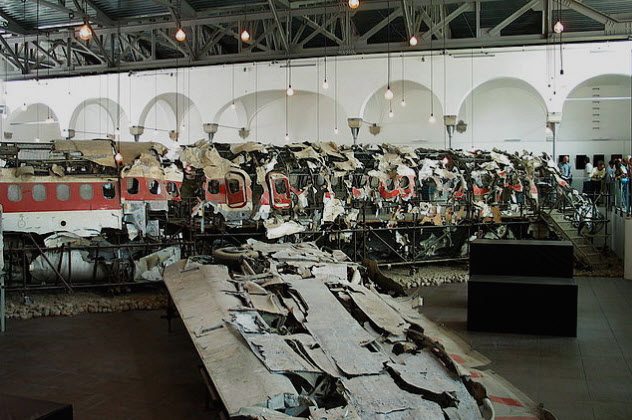 On June 27, 1980, Aerolinee Itavia Flight 870 flying from Bologna to Palermo mysteriously crashed in the sea around Ustica Island, killing all 77 passengers and four crew members. To date, the cause of the crash, which Italians call the “Ustica Massacre,” remains a mystery. Mechanical problems and terrorism were initially fingered as possible causes until a 1989 investigating commission concluded that the plane was shot down by a missile.

At the time, Italian president Francesco Cossiga claimed that the airplane had been shot down by a French missile even though evidence points to an Italian missile. It is speculated that the aircraft became caught in the cross fire of aerial combat between NATO and Libyan planes. This speculation gained more credence after the wreckage of a Libyan MiG-23 was found in Calabria a few weeks after the crash.

The Italian government has been accused of covering up the crash, and five Italian Air Force officials linked to the event have died under suspicious circumstances. In 2011, a Palermo civil tribunal ruled that Aerolinee Itavia Flight 870 had been struck by a missile and ordered the Italian government to pay €100 million in compensation for failing to protect the Italian skies, concealing the truth, and destroying evidence.[5] 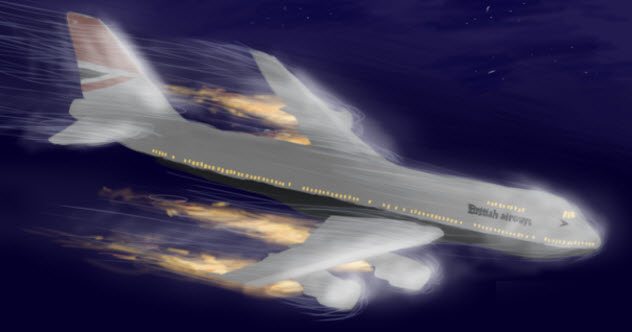 On June 24, 1982, British Airways Flight 009 was flying from Kuala Lumpur to Perth when it lost all four engines as it cruised over Java, Indonesia. Before the loss of power, Captain Eric Moody had noticed smoke rising from the airplane floor, followed by an irritating smell and a strange glow called St. Elmo’s fire.

St. Elmo’s fire is caused by the presence of static electricity on the airplane windshield. At the same time, the cabin crew saw that the front of the airplane’s engines glowed like they were burning inside.

The airplane started losing its engines one after the other until the aircraft was turned into a jumbo glider with 247 passengers. Moody seized this opportunity to tell the passengers that all four engines had stopped working but he trusted them to keep their cool while he and his first officer did their best to restart the engines. The pilots were able to restart the engines 15 minutes later and quickly made a detour to Jakarta.[6]

Investigations revealed that the engines were damaged and clogged with volcanic ash released during the eruption of Mount Galunggung. The pilots were only able to restart the engines because the ash had solidified and broken off. 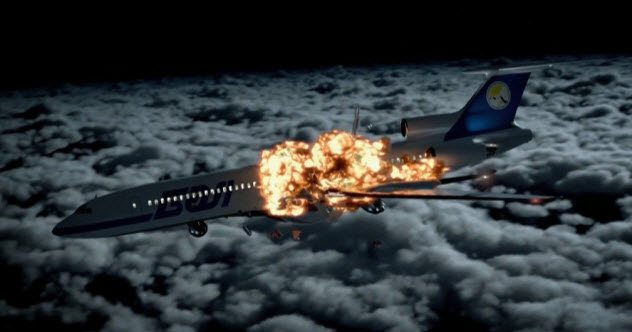 On July 1, 2002, a Russian Bashkirian Airlines Tupolev 154 carrying 69 crew members and passengers, including 45 students, was bound for Spain when it collided with a DHL Boeing 757 cargo plane above the village of Uberlingen in Germany. The crash was caused by a conflict between the instructions given by the Traffic Collision Avoidance System (TCAS) in the Tupolev 154 and those of the Swiss air traffic controller who was monitoring the flight.

The result was a disastrous collision that led to the deaths of all 69 people in the Tupolev and the two pilots in the DHL cargo plane. The crash was blamed on Swiss air traffic control, which had its collision avoidance system switched off and only Nielsen manning two stations that night.

Russian architect Vitaly Kaloyev lost his wife and two children in the crash. Devastated by his loss, he hired a detective to track down Nielsen’s address. Then Kayolev flew to Nielsen’s home and stabbed him to death.[7] 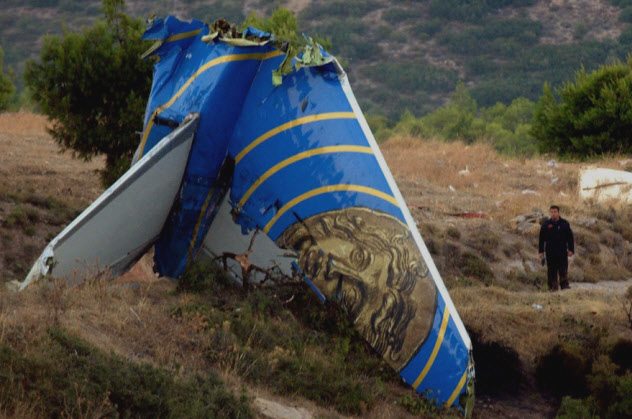 On August 14, 2005, Helios Airways Flight 522 was flying from Cyprus to Prague when it crashed in Greece, killing all 121 passengers and crew members. Investigations revealed that almost all the passengers and crew had become unconscious hours before the crash.

Apparently, some technicians serviced the airplane before takeoff and forgot to change a key setting in its air conditioning system when they were through. This caused reduced oxygen levels and, consequently, mass unconsciousness of the passengers and crew when the plane was airborne. Worse, both pilots misunderstood the problem when the warning alarm went off.

The cabin crew knew that something was wrong when the airplane, which was on autopilot, continued ascending instead of descending when its oxygen masks automatically deployed. However, the crew could not contact the pilots or enter the cockpit because it was protected by locked bulletproof doors that had become a feature of airplanes after the 9/11 attacks.

The flight continued on autopilot for two hours until it was intercepted by two Hellenic Air Force F-16s. One F-16 pilot reported seeing a flight attendant, later identified as Andreas Prodromou, enter the cockpit.[8] But it was too late as the airplane soon ran out of fuel and crashed. Autopsies revealed that many of the crew members and passengers were alive but unconscious when the plane crashed. 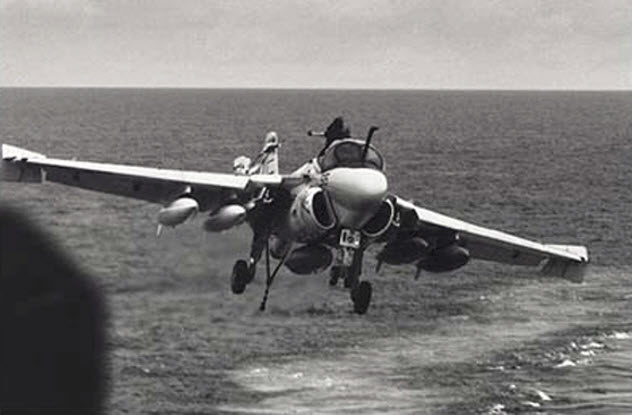 On July 9, 1991, a US Navy KA-6D, the tanker version of the Grumman A-6 jet fighter, took off from the USS Abraham Lincoln for a midair refueling operation. Aboard were Lieutenants Mark Baden, the pilot, and Keith Gallagher, the bombardier and navigator. A few minutes into the flight, Gallagher was ejected from his seat and left stuck between the airplane glass canopy and the cabin.

The upper part of his body had broken through the canopy and was outside the plane, while the lower half of his body remained inside. His helmet had also been knocked off his head, leaving him exposed to heavy winds that started to suffocate him. He attempted an ejection but was unsuccessful. Six minutes later, Lieutenant Baden landed the jet and both finally realized the severity of the incident.

Apparently, Gallagher had only partially ejected from the aircraft because his parachute had coiled round the tail fin. Baden got an Air Medal for his swift decision during the event, while Gallagher suffered damage to his shoulder and temporary paralysis that took him out of action for six months.[9] 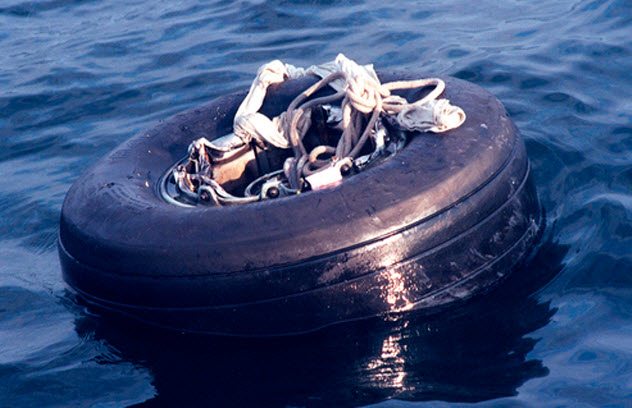 On October 31, 1999, EgyptAir Flight 990 was flying from New York to Cairo when it mysteriously “broke up” while still in US airspace, killing all 217 passengers and crew members.

The US government claims that the “breakup” was caused by stress on the airplane. One of its pilots, Gamil el-Batouty, attempted to commit suicide by putting the plane into a dive. According to reports, the suicide was foiled when Captain Ahmed el-Habashi wrested the controls from el-Batouty and returned the airplane to 7,300 meters (24,000 ft), where it broke up from the stress.

Egypt disputes this account and insists that el-Batouty never attempted suicide. Egyptians believe the “breakup” was actually an explosion caused by a timed bomb dropped on the airplane by Israel’s Mossad. The supposed targets were the 34 generals and 20 pilots of the Egyptian Armed Forces who were aboard the aircraft. They were returning home after three years of training in the use of top US-made weapons, which Israel claims are a threat to its existence.[10]