Sometimes touted as the eighth wonder of the ancient world, the Great Sphinx of Giza is about as iconic of a symbol of ancient Egypt as you can get. The structure offers us an invaluable glimpse into the past. Many hope that one day, it might also offer us an insight into the true purpose of the pyramids it sits near.

However, despite all we know—or think we know—about the Sphinx, there are still a plethora of questions to be answered. And as we will see as we move down our list, it would appear there are some who might prefer the secrets of the Sphinx remain exactly that. 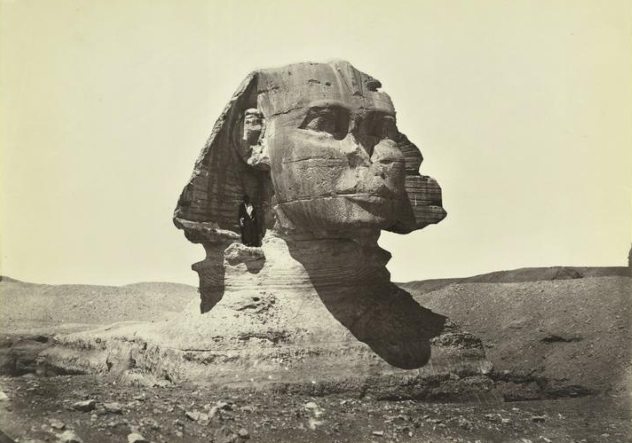 Over the years, some of the finest archaeological minds of the Western world never saw all of the Sphinx. Even Napoleon would only witness the Sphinx’s head when he arrived in Egypt in 1798. The rest was buried in sand. It was due to the persistence of an engineer, Frenchman Emil Baraize, that the full body of the Sphinx was finally revealed to the world for the first time in thousands of years.

Where others had given up, Baraize would spend over a decade clearing the huge amount of desert sand from around the ancient structure, and in 1936, it finally stood in all its glory for the world to witness.[1]

Some of those who had embarked on missions similar to Baraize only to abandon their projects included Giovanni Caviglia (explorer and leading Egyptologist of his time), Auguste Mariette (respected French archaeologist) and Gaston Maspero (respected 1800s Egyptologist).

9 Carved From A Single Piece Of Rock 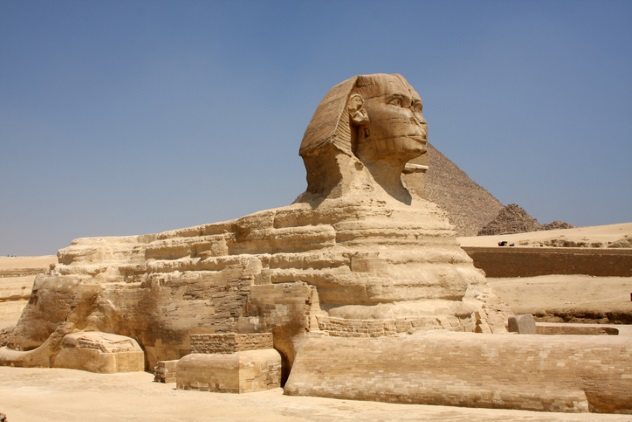 The ancient monument was carved from one single piece of limestone and measures an impressive 73 meters (240 ft) long and 20 meters (66 ft) high.[2] (Its original shape has since been partially resorted with blocks.) The Great Sphinx is the largest known sphinx of the ancient world.

To say it is an amazing accomplishment in construction and architectural history would be an understatement. Of course, although we won’t delve into it here too much, there are those who suspect, even assert, that the construction of the Sphinx, and the pyramids themselves, had more influence than mere human. Whether it was extraterrestrials, or a (now) long-forgotten ancient civilization who were more advanced than we give our ancestors credit for, it is certainly something to be appreciated.

Even the nearby Sphinx Temple was built with pieces of stone in excess of 200 tons, which were quarried around the same time as the Sphinx’s construction.

8 No Inscription As To Who Built It 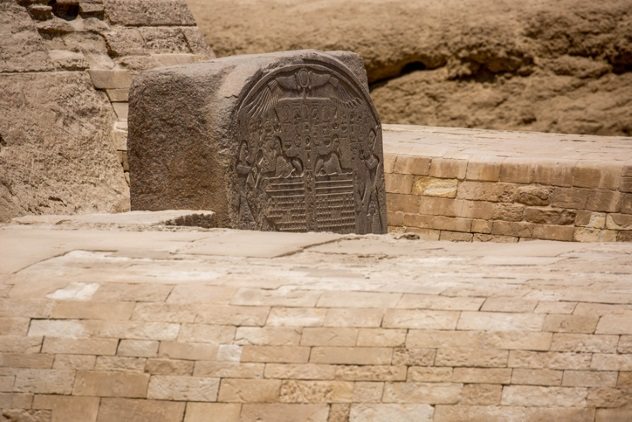 Despite the obvious importance such a statue must have had to those who constructed it, there are no inscriptions anywhere outside, on, or inside the Sphinx to declare exactly who was responsible for its construction, why, and (perhaps the key question, which we will look at shortly) when.[3]

Many mainstream historians and Egyptologists insist that the pharaoh Khafre was responsible for its development. This is mainly due to references on a stone tablet that resides safely in between the paws of the Sphinx named the Dream Stele as well as the “need” to stay within the boundaries of accepted mainstream history. As we will see a little later on in our list, many mainstream researchers would also state the image of the Sphinx is actually Khafre’s, although counter-research has declared this to be inaccurate.

Although it doesn’t state who built the Sphinx, the Dream Stele does announce who was responsible for its own erecting.

7 It Spoke To Thutmose IV (According To Ancient Writings) 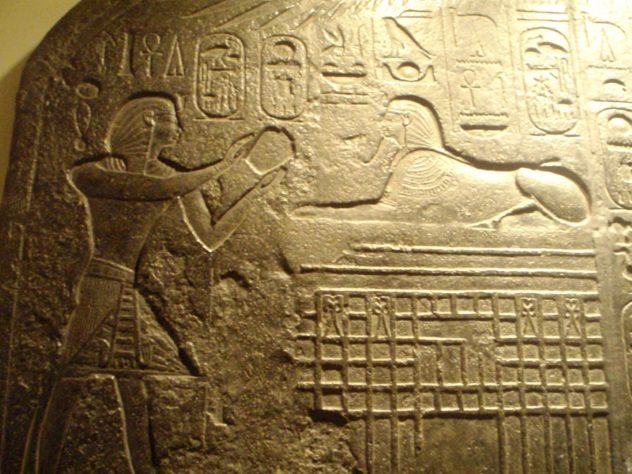 According to what most people ascribe to being simply a legend or ancient Egyptian folklore, before he became pharaoh, Thutmose IV would settle down for the night to sleep underneath the head of the Sphinx, which, according to the tale, was already an ancient structure and buried up to its neck in sand.[4] As he slept, he dreamed of the Sphinx speaking to him. It told him that if he uncovered its structure, he would make him, Thutmose, the new pharaoh. At the time, although he was royalty, he was not in line to be pharaoh.

Upon awakening, he began to dig away at the sands around the neck of the head and continued to do so until he had uncovered the magnificent structure we enjoy today. According to the intertwining of history and legend, the Sphinx made good on its promise, and Thutmose became Thutmose IV.

The story is told on the tablet residing in between the paws of the Sphinx. What is interesting to some is that Thutmose IV is the grandfather of Akhenaten (also known as Amenhotep IV initially)—an intriguing and controversial figure in ancient Egyptian history. 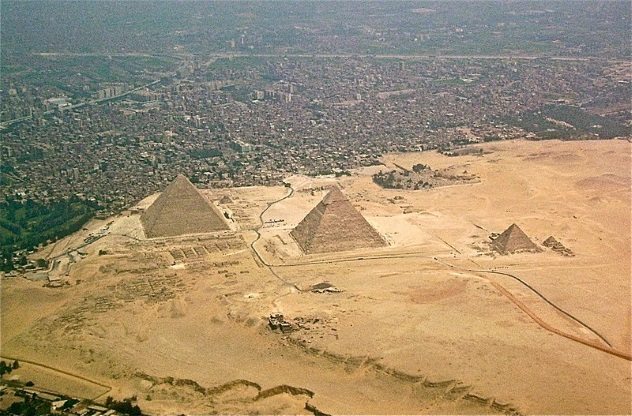 It is accepted that the vast majority of the equally vast deserts in Egypt are still to be searched. There could be hundreds of structures buried under the sands of Egypt. Some researchers even insist there is a real possibility of a second sphinx being discovered.[5]

Authors and researchers Gerry Cannon and Malcolm Hutton certainly believe so, and (at the time of this writing) are in the process of putting together an in-depth book as to their theories. The thrust of it rests simply with the fact that in almost all depictions of sphinxes in ancient Egyptian artwork features the monuments in pairs. This, they assert, must mean another sphinx (possibly destroyed) likely lies near one of the Giza pyramids, opposite to the first sphinx. This, they say, will represent the transformation of the Sun into the Moon.

5 It Has Been There Since ‘The First Time’ 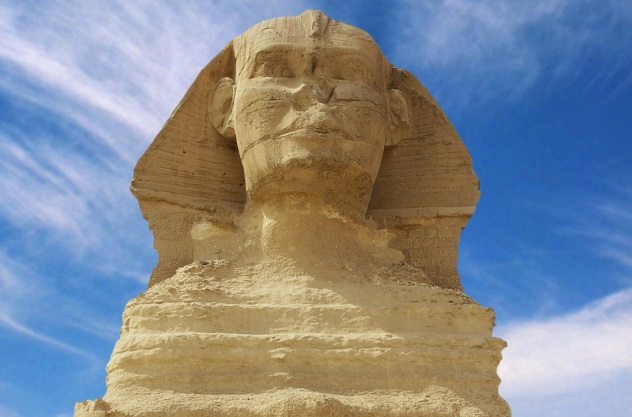 Although it doesn’t state who built it, one line in the aforementioned Dream Stele states, “I have been here since the first time.” This first time is known as Zep Tepi. According to ancient Egyptian writings, this was a time when the gods lived and walked alongside the human population. It was, according to ancient records, a golden time. Of course, most mainstream historians insist Zep Tepi is legend only. Others, however, believe the possibility it was real.

One such researcher is Robert Bauval, who has spent decades studying the Sphinx, its origins, and its purpose or meaning. His theory, known as the Orion Correlation Theory, proposes that the Sphinx and the pyramids had a correlation with the belt of the constellation Orion, and furthermore, in 10450 BC, this alignment would have been perfect.[6] 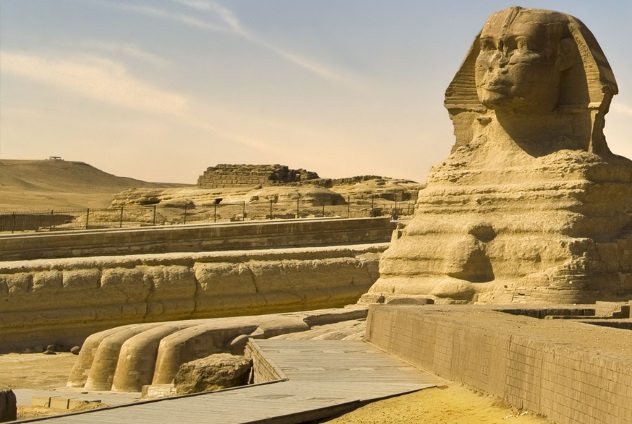 While mainstream scholars insist that the Sphinx was likely built around 2500 BC, there is increasing evidence and continued research that suggests it is far older than that.[7]

One researcher who has carried out extensive investigation into this claim is geologist Robert Schoch, who claims that water erosion around the sides of the Sphinx is testament to its real age. According to Schoch’s research, this corrosion has taken place over thousands of years, which would mean regular and consistent rainfall. This is something that Egypt has not experienced, according to geological records, since somewhere between 7,000 and 12,000 years ago (and probably on the older end of that range).

If this is the case, then the Sphinx would be 12,000 years old, if not older. Some studies, speculative as they are, even date the Sphinx in terms of hundreds of thousands of years.

3 Is It Actually Anubis? 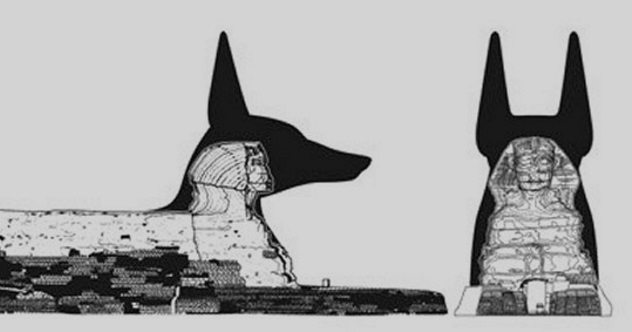 While the face of the Sphinx is claimed by mainstream historians to be that of the aforementioned Khafre, many claim that the original face was not human at all.[8]

Some theories suggest it to have been a lion to represent the star sign Leo. However, there is no mention or artwork of lions holding such “status” within ancient Egyptian society. Also, the stance—a sitting position—does not represent that of a lion. Given the extraordinary amount of effort that went into building the Sphinx, you would imagine that the stance of the animal it was representing would be equally accurate.

The flat back and general body language of the Sphinx has more in line with how a dog would sit when in such a position. The fact that Anubis, a dog god, is also regarded as a “Guardian of the Necropolis ” (if you consider the Giza Plateau to be such a necropolis) perhaps fits the position the statue is in. Might it be that the Sphinx was actually Anubis when it was first built, and then its face was altered later to suit the desires of those behind the alteration?

2 Tomb Of Osiris Nearby 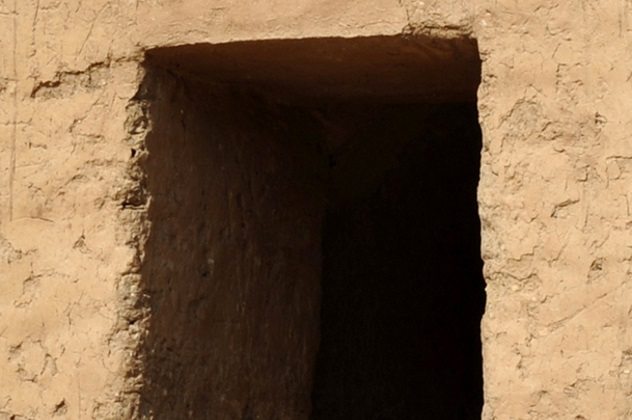 The god Osiris is largely thought to be mere legend as opposed to a real flesh-and-blood being. However, a shaft in one of the buildings in the immediate vicinity of the Sphinx declares itself to be the tomb of the ancient deity.

The are a plethora of theories as to the discovery. Some declare that the tomb is symbolic only, while others attest it to be a genuine resting place for an actual god and that Osiris actually lived in antiquity.[9]

One group that especially subscribes to such a notion is those with an interest in the ancient astronaut theory, who have long attributed extraterrestrial influence in the ancient Egyptian culture, even citing such gods as Osiris as being actual aliens. Taking this theory even further, and given the alleged sighting of a sphinx and pyramids on Mars (in the exact same layout no less), some claims of the more outlandish variety state that the Osiris Shaft is actually a stargate.

1 The Hall Of Records 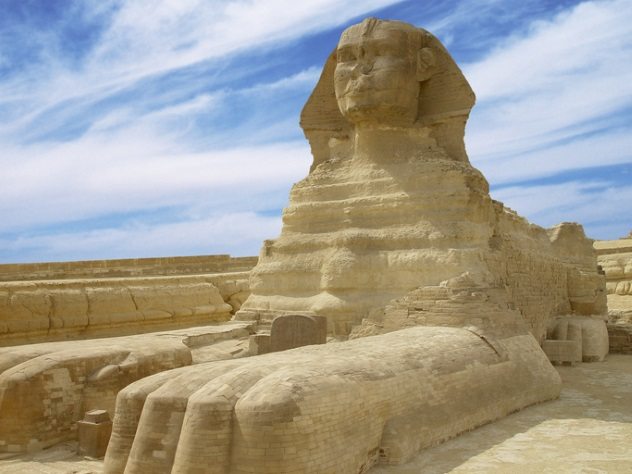 Although the idea itself is a little outrageous to some, many researchers have spent considerable time investigating the claims of an apparent hall of records that resides under the Sphinx.[10]

Legend states that the Hall of Records contains esoteric knowledge and complete timelines of prehistory, back to the dawn of time. Many people also attribute the keepers of this knowledge as being the survivors of Atlantis, who, when migrating and resettling in Egypt, stored away the invaluable information of a world now ravaged.

The noted and respected mystic Edgar Cayce is said to have channeled the most detailed information about the Hall of Records, and he did this consistently and on several occasions. While many are understandably suspicious of Cayce—and such abilities in general—many others attest to the accuracy of his predictions as well as his ability to correctly diagnose and even cure people of their illnesses. Might he also have been correct about what is sitting under the Sphinx? The only way to tell would be to inspect the site. That leads us on to an extra entry on our list. 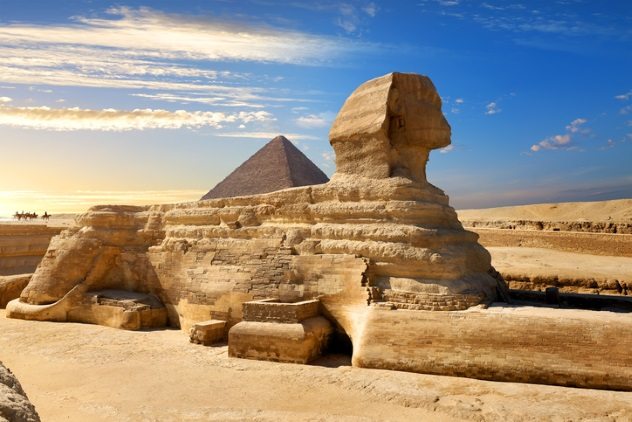 With that last claim in mind, in 1997, Joe Jahoda and Dr. Joseph Schor would conduct seismological studies that appeared to suggest there was indeed an empty space under the Sphinx—exactly where Cayce said it would be.[11] Furthermore, the space appeared to be too precise and accurate in terms of the 90-degree angles that were detected to be something created naturally over the years since the construction. According to the two researchers, they believed the space to be an artificially created one.

They would seek permission from the Egyptian authorities to excavate the area—which was denied. Other research teams have made similar requests to search under the Sphinx as well as in the tunnel systems which appear—from basic external studies—to connect to the Sphinx from the pyramids. All requests, like that of Jahoda and Schor, would be denied.