Movies are often entertaining, but they’re not always accurate. Understandably, many filmmakers are more interested in creating dramatic, stirring films than they are in providing accurate information. After all, they’re entertainers, not educators.

Sometimes, the plot of a movie or a film’s dramatic appeal depends on a misconception. For example, a woman who normally uses only 10 percent of her mental capacity may suddenly use all her brainpower. As an instant genius able to perform marvelous feats, she is a much more intriguing character than one who lives an ordinary life.

Whether accidentally or intentionally included, misconceptions appear in a variety of films.

The French science fiction film Lucy (2014) revolves around the idea that people use only 10 percent of their brains’ capacity. Lucy, portrayed by Scarlett Johansson, is a young American woman living in Taipei, Taiwan, when gangsters kidnap her and force her to serve as their drug mule. When she accidentally consumes part of the illegal substance she’s smuggling, she becomes an instant genius with amazing abilities she’s never had before.

The premise that Lucy could develop superpowers simply by employing the 90 percent of her brain that would normally go unused is based on the persistent misconception that a tenth of our potential brain power is all we typically put to use. On the National Public Radio program All Things Considered, hosted by Eric Westervelt, neuroscientist David Eagleman discussed the misconception with Morgan Freeman, who played Professor Samuel Norman in the movie.

According to Eagleman, the notion that we use only a tenth of our brains is a fallacy. In fact, we use 100 percent of our brains all the time. Ariana Anderson, a researcher with the University of California at Los Angeles, said on the show that anyone who actually used only 10 percent of his brain “would probably be declared brain-dead.”

Eagleman suspects that the myth persists because people want to believe they can greatly improve. Although it’s a misconception, the belief that 90 percent of our brainpower remains untapped is “the neural equivalent to Peter Parker becoming Spider-Man,” he said.[1]

In 21 Jump Street (2012), Officers Greg Jenko (Channing Tatum) and Morton Schmidt (Jonah Hill) arrest a suspect, but the police department is forced to release him because Jenko and Schmidt failed to read the suspect his Miranda rights. When Deputy Chief Hardy (Nick Offerman) asks them what these rights are, neither officer is able to recite them correctly.

Jenko and Schmidt obviously need training, but so does their supervisor. The suspect arrested by the officers shouldn’t have been released from custody. The law does not require arresting officers to read suspects their Miranda rights at the time of arrest. Arrestees must be notified of their Miranda rights only if two conditions are met: arrest and interrogation.[2]

In Double Jeopardy (1999), Libby Parsons (Ashley Judd) has been framed for killing her husband (who’s very much alive). She receives this legal advice from a fellow inmate: Since Libby has already been convicted of murdering her husband, she can now kill him with impunity. The Constitution’s protection against double jeopardy, which prohibits a person from being tried twice for the same crime, prevents her from being held accountable for the act.

Although Libby believes this misconception, she shouldn’t have. First, her fellow inmate doesn’t have a license to practice law. Second, the jailhouse lawyer doesn’t know what she’s talking about.

Constitutional attorney and author John W. Whitehead explains the nuances of the law as it applies to Libby’s situation: “The prosecutor stated a specific time and place for the crime. If she had actually killed her husband later in the movie, it would’ve been in a different city and time, making it a different crime. Therefore, double jeopardy would not apply, and she would be accused of murder.”[3]

Rather than kill her husband, Whitehead says that Libby should give the authorities proof that her husband lives. The court would then throw out her conviction and charge her errant husband.

In Flatliners (1990), a group of medical students decide to “flatline” themselves to investigate what happens after death. According to the movie, someone who’s flatlined can be defibrillated.

To understand why this is a misconception, it helps to know that an asystole is the absence of ventricular contractions for a length of time surpassing that for which life can be sustained. In such a case, the electrocardiogram will show a flat line.

As science journalist Karl S. Kruszelnicki explains, the use of paddles and jumper cables won’t work unless electrical activity is already occurring within the heart. By definition, “asystole” indicates that such activity has ceased. Shocking the heart won’t work.[4] 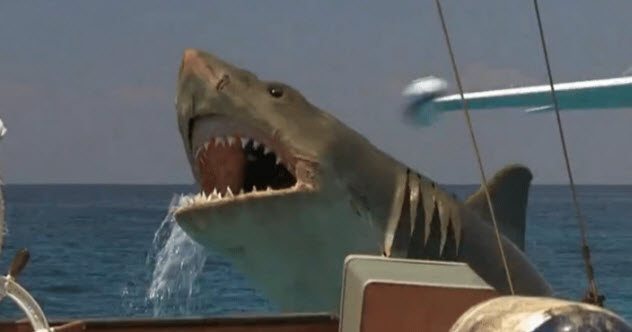 Peter Benchley, who wrote the 1974 novel Jaws that inspired Steven Spielberg’s 1975 movie of the same title, regrets having written the best seller. At the time, he believed that man-eating rogue sharks existed, but he has since learned that they don’t.

Worse yet, his depiction of such a predator in his novel has “provided cover for people who simply wanted to go out and kill sharks under the guise of somehow making people safer,” said Simon Thorrold, a senior scientist at the Woods Hole Oceanographic Institute.[5]

The idea of man-eating rogue sharks isn’t the only misconception on which the novel and its film adaptation are based. The book and the movie characterize great white sharks as territorial. In reality, they are not. As OCEARCH founder Chris Fischer points out, sharks don’t hunt humans and they’re constantly moving from one place to another.

Author Michael Crichton outlined his 1990 novel like this: “Jurassic Park is based on the premise of scientists successfully extracting dinosaur DNA from the thorax of preserved prehistoric mosquitoes, cloning it, and recreating and breeding a variety of dinosaurs to roam a for-profit theme park.”

Steven Spielberg’s 1993 film adaptation of Crichton’s novel is based on the same premise. Unfortunately, it’s unscientific, although the misconception is one that many continue to believe.[6]

A team of scientists at the University of Manchester studied insects preserved in copal, a resin from tropical trees that has not become fossilized amber yet. Although the copal samples were 60 to 10,600 years old, they contained no ancient DNA. As a result, it would be impossible to clone dinosaurs in the manner in which they were supposedly recreated in the movie.

In the romantic comedy Simply Irresistible (1999), Nolan Traynor (Larry Gilliard Jr.) tells Amanda Shelton (Sarah Michelle Gellar) that men think about sex 238 times a day. He adds that they adjust their belts each time they do.

Later, she notices that Tom Bartlett (Sean Patrick Flanery) doesn’t wear a belt and asks him about Nolan’s claim. After considering how many hours a day he’s awake, Tom estimates that he thinks about sex once every four minutes on average, which matches Nolan’s statement.

Similar claims have been advanced by others with different time intervals between sexual thoughts. To determine whether such claims are true, Terri Fisher and her team of researchers used “experience sampling,” a technique in which subjects record their thoughts at random moments throughout the day.

It’s possible that the students were influenced by their instructions to click when they thought of sex, food, or sleep and so thought about these topics more often than they would have otherwise.

Wilhelm Hoffman and his colleagues employed a different approach. Using participants’ smartphones, the students were notified seven times a day at random to record the topic of their current thoughts. On average, participants thought about sex once a day.

Although the results of Hoffman’s study may also have been skewed by giving instructions to the participants, both his and Fisher’s studies suggest that Nolan’s claim is false.[7]

The comedy Swiss Miss (1938) stars Stan Laurel and Oliver Hardy as mousetrap salesmen who travel to Switzerland to sell their wares because they believe that the country known for Swiss cheese must also have more mice. The movie includes a scene in which Laurel cons a Saint Bernard out of the keg of brandy carried on the dog’s collar.

Prior to Swiss Miss, cartoons and humorous illustrations depicted Saint Bernards as coming to the rescue of stranded alpine hikers or mountain climbers. The kegs of brandy carried by the dogs kept the victims warm while help was on the way.

However, the idea that alcohol can keep a body warm is a misconception. Although drinking alcohol may initially help you to feel warmer, it actually reduces your core body temperature. So if you drink alcohol while stranded in the snow, you could suffer from deadly hypothermia.[8] 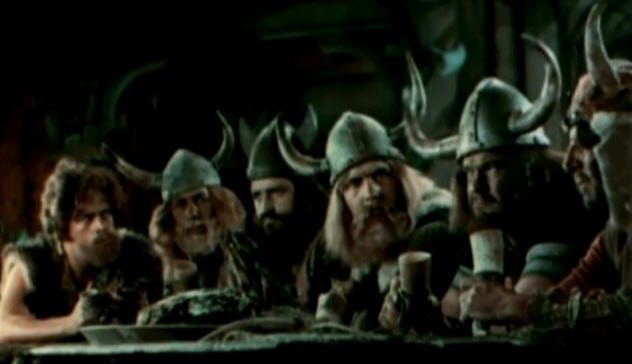 For decades, movies featuring Vikings have shown Norse warriors wearing horned helmets. The Viking (1928) is only one such movie based on the mistaken idea.

The misconception probably began in the 1800s when illustrations of fierce Scandinavian warriors showed them wearing helmets adorned with horns. The Viking costumes designed for Richard Wagner’s opera cycle Der Ring des Nibelungen included horned helmets, which may have led to the stereotype.

In reality, no evidence supports the idea that Viking helmets were equipped with horns. In illustrations from the Vikings’ time, they are shown with bare heads or wearing simple iron or leather helmets. So far, one complete Viking helmet has been found in Norway in 1943. Made of iron, it had a rounded cap with a guard for the eyes and nose. There were no horns.[9]

The misconception that fingernails continue to grow after death appears to have been popularized by The Tingler (1959) in which Vincent Price plays pathologist Dr. Warren Chapin. He explains that “a great many things continue to live in the human body” after death. For example, fingernails still grow.

Chapin couldn’t have been much of a pathologist if he believed what he said. Medical science teaches us that fingernail growth depends on glucose producing new cells. Since dead people don’t consume glucose—or anything else—there’s no supply of the sugar.

The misconception that fingernails continue to grow after a person dies probably stems from the fact that dehydration causes the skin around the nails to retract, which makes the nails look longer.[10]