In earlier days, the things we wore did more than just keep us warm. They were often pieces of art, carrying meaning about our cultures and our beliefs.

There are tribes that don’t even wear clothes who still use costumes in ceremonies, imbued with functions and meanings that, today, are barely understood. As time churns on and the world homogenizes, these costumes are fading out of use and memory—and the stories behind them are being lost. 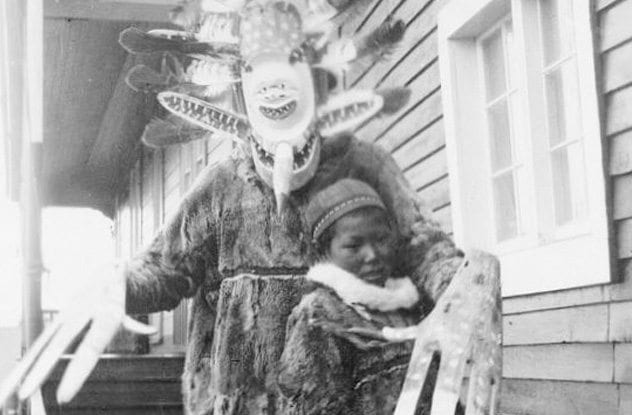 The Yup’ik people come from the cold, hard winters of Siberia. In their part of the world, food can be scarce. When the hunters would go out to find food, they would rely on the magic of shamans.

Yup’ik shamans wore incredible painted masks out of wood and would lead ceremonies meant to ensure that the hunting went well. The ritual was a type of prayer, meant to get the help of spirit to placate the animals they would hunt.

They would also serve as the village’s medicine men. If someone was sick, they would contact spirit helpers who would ward off the evil that was hurting them.

When the Europeans came up through the north, though, the Yup’ik people were converted to Christianity. The traditional dances were banned, and the masks became nothing more than art projects to hang on the wall. 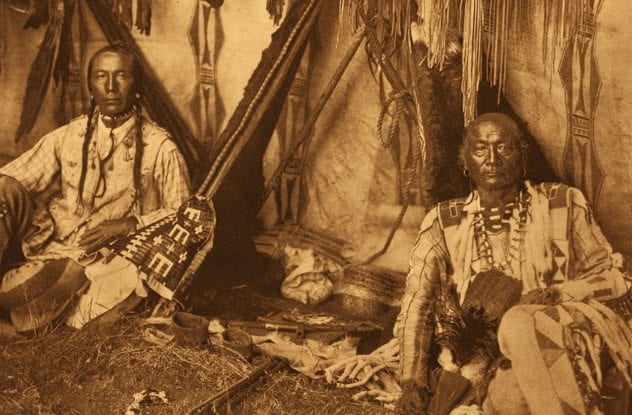 In the 1930s, a photographer named Edward Curtis stayed with the Navajo people. He photographed them in their ceremonial costumes, determined to preserve the memory of a culture that he feared was dying.

He took pictures of the Navajo people using some incredible masks in their ceremonies, meant to look like their gods. This one is of the god Nayenezgani, the Slayer of Alien Gods, who they would call upon for miraculous births or for help in war.

During their chants, a man would wear a costume imitating on of their gods and would dance and act out performances. The chants would tell stories and ask for help from spirits, who might give luck or exorcise evil spirits. 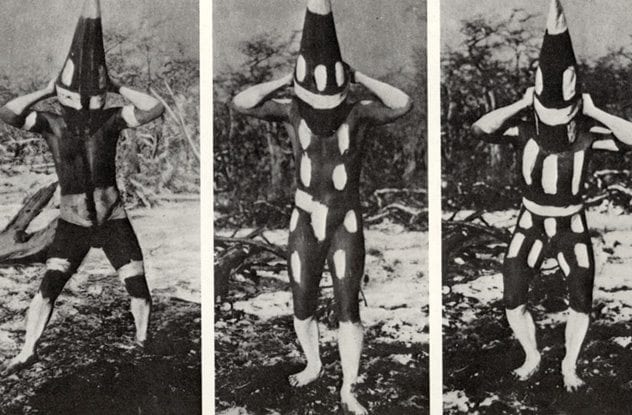 The Selk’nam people lived in modern Argentina and Chile, and they had costumes that were pulled right out of Silent Hill. These aren’t just accidentally creepy—they were made to freak kids out.

They wore these things for an initiation rite that marked the beginning of manhood. Young men would be brought into a dark lodge with no idea what was going to happen. Then, someone wearing one of these costumes would jump out, pretending to be a demonic spirit.

It wasn’t just for the fun of scaring children—the Sekl’nam did it to teach their creation story and a lesson. Once the boy was good and scared, they’d take off their mask tell them that women once ruled the world. In those days, the women used these masks to scare men. One day, though, the Sun Man realized that these were just women and not spirits, and so he and the men beat the women and took power.

It’s not exactly the most politically correct creation myth, but it’s what the Sekl’nam believed and shared to teach boys to overcome fear. 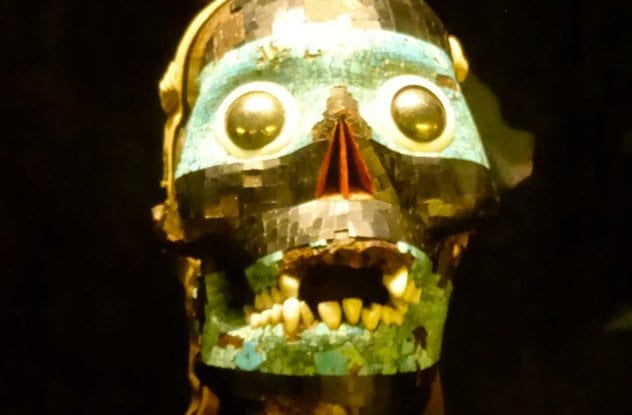 Aztec masks didn’t just look like human skulls—some of them were made from them. Aztec warriors would sometimes literally remove a victim’s face and use it to make a mask.

The warriors didn’t do the art—they just supplied the skulls. They’d bring them to a temple, where the skulls would be covered in black stone, wood, and obsidians. Sometimes they would even attach teeth and eyes to the masks.

The masks would then be displayed as works of art. Others would be put on the bodies of dead nobles, who would wear them in the grave. 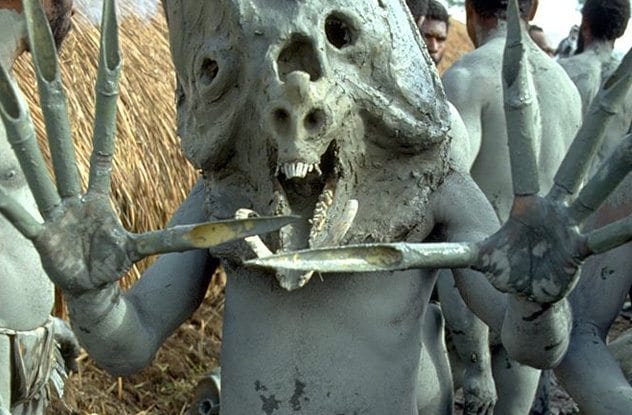 The Asaro Mudmen go to war covered in white clay with some completely unnerving masks hanging on their heads.

According to their legends, the Asaro started painting themselves white after they were attacked by an enemy tribe. The survivors had to flee and hid out in the white clay of the Asaro River.

When they came out and returned to take back their home, they were covered from head to toe in white. The enemy tribe, thinking they were ghosts, fled in terror—and they won without raising a single weapon.

Afterward, the Asaro Mudmen started wearing white body paint and masks showing the faces of spirits whenever they had to go to war. The costumes worked as psychological warfare. They struck terror in the hearts of their enemies and sent them into a panic before they had to raise their arms. 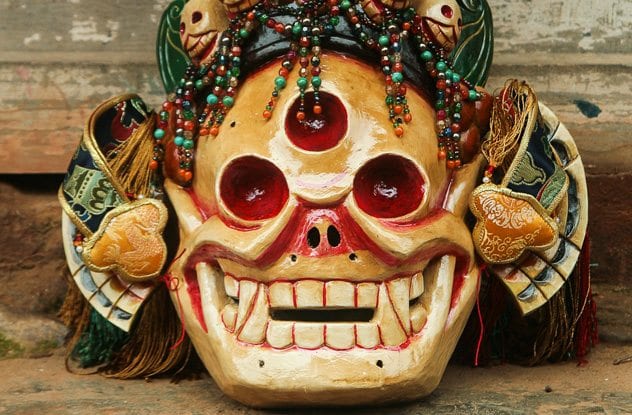 Tibetan monks hold festivals called Cham Dances, where they put on costumes and dance in a form of prayer and meditation. There are countless different masks and costumes you can see on display but none creepier than the Citipati mask.

This mask represent a pair of Buddhist deities called the Citiapi. In life, they were a pair of monks who took meditation seriously. They got so absorbed in meditating that they didn’t notice when a thief broke in and cut off their heads.

In the afterlife, they swore vengeance on thieves and kill any who come near. The Citiapi are dead, though. They can’t do anything to anyone who doesn’t come into a cemetery, so they don’t get to exact revenge all that often. Instead, they spend their time blowing horns and dancing—which makes death sound pretty fun. 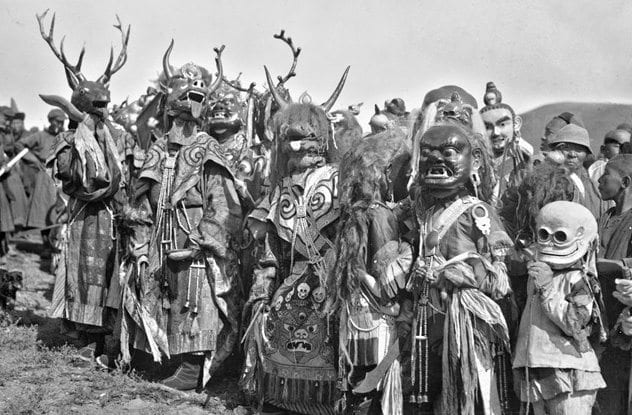 Before Buddhism all but entirely erased Mongolia’s shamans, the country was full of magic men who word some absolutely complex costumes. Their clothes, they believed, gave them magical powers. Deer antlers would give them speed, eagle feathers gave them strength, and owl feathers let them see at night.

A Mongolian shaman was chosen whenever someone started hallucinating. This was viewed as a sign that someone could see into the world of gods and spirits, and so a shaman would come to the person and teach them the ways of the Mongolian mystics.

It was pretty great job—part of your role was smoking herbs and drinking alcohol when things went wrong. If there was a major problem, they believed it was a sign that evil forces were afoot, so the shaman got himself to in a state that let him descend into the spirit world and fix the problem. 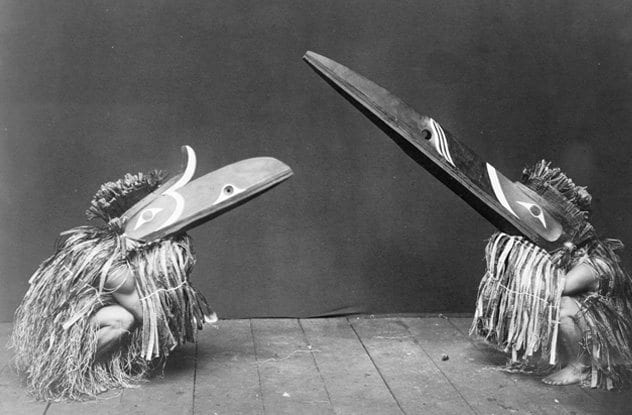 The Kwakiutl live in British Columbia, along the waterways between Vancouver Island and the mainland. They are responsible for some of the most beautiful Native American art. For them, art was a major part of their society and an important skill for every youth to develop.

Their costumes went on display during ceremonies called potlatches, where the Kwakiutl would get together and distribute gifts, arrange marriages, and announce new positions in the society.

Here, they’d often put on masks and perform dances meant to summon powerful beings from the spiritual world or playing out stories of how their ancestors once live side by side with supernatural beings. 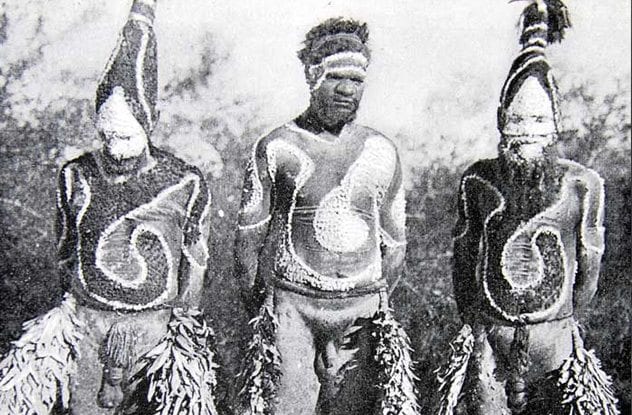 The Warumungu are an indigenous tribe that once lived in the northern territory of Australia. Before they were forcibly moved out of their homelands, they held regular ceremonies with elaborate paint and costumes, passed down from generation to generation to preserve the traditions of the tribe.

The men would decorate each other in these costumes, sometimes making hats out of tree bark and painting themselves with bands of red and white. They would act out hunting, or romantic meetings, or fights. Sometimes they would act out stories about their ancestors, or the roles of spirits in their lives.

These were used to teach the men of the tribe and to get the help of spirits. The lessons they taught, though, were top-secret. Outsiders and women weren’t allowed to watch.

1The Oldest Mask Ever Found 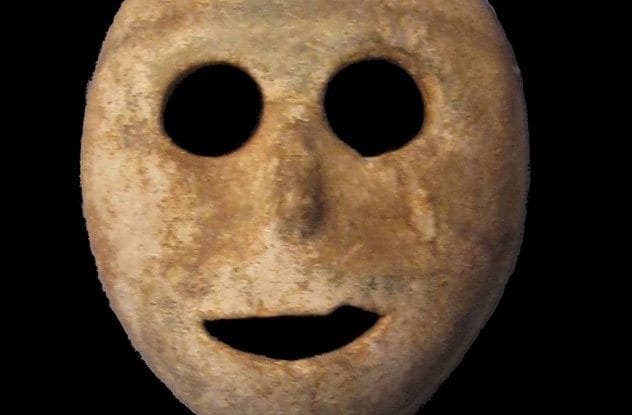 Using masks for rituals is something human beings have been doing for a long time—at least 9,000 years.

That’s how long ago the oldest mask we’ve ever found was made, found up in the Judean Hills. It’s old enough that we can only really speculate on how it was used, but researchers have noticed a few things.

First of all, the masks they have aren’t just any shape. Some of them seem to have been modeled based on the skulls of old men—and, potentially, dead men. They also seem to be modeled after specific, human faces, not just general images.

Historians believe that these masks were supposed to look like the faces of the departed. The farmers who used them, they believed, would put them on to teach stories about the ancestors they were modeled after, letting their children see the face of a dead man when they heard the stories.