The Allied and Axis powers made extensive use of propaganda during World War II. The major belligerents even set up dedicated offices to create propaganda to raise the morale of their citizens and troops. At the same time, it was meant to demoralize their enemies.

In the United States, Walt Disney created several pro–Allied Forces and anti-Nazi cartoons for the Allies. Meanwhile, the Ministry of Propaganda and Public Enlightenment oversaw the creation of propaganda cartoons for the Nazi regime.

Nimbus Libere is a short (2 minutes, 33 seconds) created by the Nazis for occupied France. It features Disney characters and was intended to mock the Allied aerial bombardment of occupied France.

It starts with Professor Nimbus (a popular cartoon character of the day) listening to the radio alongside his wife and daughter. Then a Jewish presenter with an elongated nose comes on air to inform listeners that the Allies are coming to liberate them.

Some Allied bombers soon appear in the skies. Three of them are piloted by famous American cartoon characters like Donald Duck, Popeye, and Mickey Mouse while their guns are manned by Goofy and Felix the Cat.

Behind each pilot is a bomb labeled “Made in USA.” Popeye also has a can of whiskey behind him and a map of France in front of him. The bombers drop their payload. But one bomb destroys Professor Nimbus’s house and kills him alongside his family.[1]

Meanwhile, the radio continues broadcasting until the Angel of Death lands on the rubble and switches the radio off before laughing.

Dr. Churchill lives in the Bank of England. There, he keeps a stash of gold that has been stolen from several nations that think he is their friend. He has a lab under the Bank of England where he mixes and drinks a chemical concoction of democracy, liberty, and fraternity that turns him into the friendly Dr. Churchill.[2]

Thereafter, he visits his supposed friends to steal their gold. Dr. Churchill continues to steal gold until he is exposed by the Nazis and defeated by a coalition of Nazi and Italian airplanes that also destroy London.

Momotaro’s Sea Eagles is a Japanese short created in 1942 but released in 1943. It is based on the 1941 Pearl Harbor bombing and even contains live footage of the attack. The short features Japanese folklore character, Momotaro, who leads a group of Japanese animal soldiers, airplanes, and ships to attack Pearl Harbor, which they refer to as “Devil’s Island.”

On the side of the United States is Olive Oyl, Popeye’s girlfriend, and Bluto, Popeye’s antagonist, who is depicted as a drunk US Navy sailor. The cartoon was a collaboration between the Japanese Navy and the Japanese Ministry of Education.[3]

The Nazis called the Jews a parasitic race that was destroying the lives of the hardworking German people. The Nazis even made one film titled Der Ewige Jude (The Eternal Jew), which is regarded as the most extreme of all anti-Jewish films produced during the war.

Vom Baumlein, das andere Blatter hat gewollt (Of the little tree which wished for different leaves) is a similar but animated short based on a poem by German poet Friedrich Ruckert. The short goes straight to the point of painting Jews as parasites. It is about a golden tree that is home to little birds. At least, until a Jew comes along and plucks all its leaves except one.[4]

Alternatively called Omochabako series dai san wa: Ehon senkya-hyakusanja-rokunen (Toybox Series 3: Picture Book 1936), Evil Mickey Mouse Invades Japan is a Japanese animated short featuring evil-looking flying mice attacking a group of children and a Felix the Cat look-alike. The flying mice resemble a cross between Mickey Mouse and a bat and are backed by a group of snakes and crocodiles.

Although the children escape the onslaught, the attackers chase after them until some samurais come to the kids’ rescue. The cartoon was created in 1934 but was postdated to 1936. The Japanese felt that postdating was necessary because they anticipated a war against the US in 1936, the year that a US and Japanese naval treaty was supposed to come to an end.[5]

Momotaro: Umi no Shinpei (Momotaro’s Divine Sea Warriors) is a sequel to the Momotaro no Umiwashi (Momotaro’s Sea Eagles) that we mentioned earlier. This time, Momotaro leads his army of animals to free colonized animals living in several Southeast Asian islands.

When Momotaro’s army arrives at one island, they warn the animals about the Western colonists and inform the animals of the army’s mission to free them from their oppressors. Thereafter, Momotaro leads his army and the local animals on an attack against a British military outpost on the island.

The cartoon flopped upon release because most of the intended viewers (the children) had been evacuated from the Japanese cities due to heavy Allied bombings. The few still around worked in factories and were unable to watch the cartoon.

The cartoon was lost after the war until a copy was found in 1983. It was released on home video and has now been rereleased on Blu-ray as Momotaro, Sacred Sailors.[6]

Armer Hansi is a short created by Deutsche Zeichenfilm GmbH, a German animation studio that was set up by Joseph Goebbels, the German Minister of Propaganda and National Enlightenment. This was done on the orders of Adolf Hitler, who wanted Germany to make cartoons that could rival Disney.

Armer Hansi is about a songbird called Hansi, which escapes its cage to meet an attractive bird of another species. Hansi faces a series of unpleasant situations outside his cage and is almost eaten by a flying kite and a cat.

He manages to find the attractive female but is chased away by her partner. However, Hansi later finds a female of his own species and joins her in her cage where they live happily ever after.[7]

Der Storenfried is a German-made short (13 minutes) starring a troublesome fox that threatens the children of a rabbit. However, the rabbit is helped by a coalition of wasps and dogs (representing the German Air Force and Army) which engage the fox and chase it away from the village. The wasps and dogs attack in military formation, with the wasps diving and firing their stingers like the airplanes of the day.

The cartoon was intended to show how multitudes of weaker animals could work together to defeat a stronger adversary.[8] The film was later adapted into a book, Reintje verwekt onrust, where the fox is depicted as the Soviet Union and the wasps are depicted as German airplanes.

Reynard the Fox is based on Van den vos Reynaerde, Ruwaard Boudewijn en Jodocus (Reynard the Fox and the Jew Animal), an anti-Jew, pro-Nazi novel written by pro-Nazi Dutchman Robert van Genechten in 1937. In the novel, Reynard, a fox, kills a crash of rhinoceroses including one called Jodocus, whose name is derived from the Dutch word for “Jew.”

In the cartoon, a kingdom of animals is led by a donkey called Baldwin. Then some merchants, depicted as rhinoceroses with extra-large horns, come along and trick Baldwin until he puts them in charge of collecting the kingdom’s tax.

The rhinoceroses start promoting democracy as an alternative to the outdated aristocracy. Reynard observes the rhinoceroses and discovers that their mission is to overthrow King Baldwin. So Reynard leads the animals in a revolt against the rhinoceroses.[9]

Der Schneemann (The Snowman) is about a snowman that comes to life after falling snowflakes make a heart-shaped pattern on his chest. The snowman goes on an adventure—skating, playing, and hiding his carrot nose from a hungry rabbit.

He soon finds a calendar and realizes that there are other seasons apart from winter. So the snowman decides to hide in an icebox (a precursor to today’s refrigerators) and survive until the summer.

Summer arrives, and the snowman leaves the icebox. As expected, he cannot survive the heat and bursts into a song titled “Da ist der Sommer meines Lebens” (“This is the Summer of my Life”) just before melting.

The rabbit, which the snowman had earlier denied his carrot nose, appears and observes a moment of silence for the snowman before making away with the carrot. Der Schneemann has very little depiction of the Nazis and has even been said to be free of propaganda. Some even claim that the cartoon is actually anti-Nazi.[10] 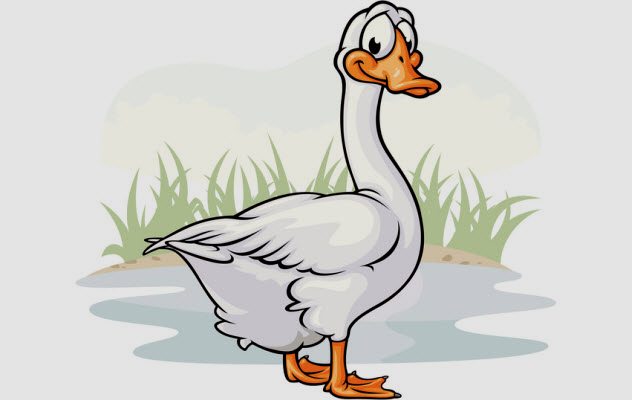 Das dumme Ganslein is about a goose that leaves its farm and almost falls victim to a crafty fox that kills geese and captures other animals as slaves. It is the last of three shorts produced by German animator Hans Fischer, who is also known as Fischerkoesen.

The two other shorts are Weather-Beaten Melody (1942), which is about a wasp that plays an old record with its stinger, and The Snowman (1943), which we mentioned above.